I headed out this past Sunday morning to see if I could catch CN Local 589. It was a beautiful sunny morning when I ventured out on Moodie Drive to see if the local had picked up the empty lumber car from Kott Lumber. Through the thick foliage, I could just make out the car, which meant I was in luck. This local sometimes does its rounds early Sunday. But sometimes, it waits for Via's Toronto-bound Train 643. That corridor train was due in a few minutes when I arrived, which meant CN 589 would closely follow.

As I mentioned in my post Your Guide to Rainfanning in Ottawa, Sunday morning around 9:30 a.m. is your best bet to catch what little freight action there is in Ottawa. I made my way to the McKenna Casey Drive crossing to catch the Via corridor train, which came by around 9:30 a.m. I would suggest camping out at about 9:20 at this crossing, as the time for this train varies by about five minutes on either side of 9:30. There is also a gravel road near this crossing where you can safely park and see the train make its way down the track. The corridor train rushed by and I did get some shots (see final shot). But my mission these days is to catch freight trains. Even if the consist is tiny.

As a refresher, here are the chronicles of my two other encounters with Local 589:
One is the loneliest number (June)
Capturing a Ghost: CN 589 (April) 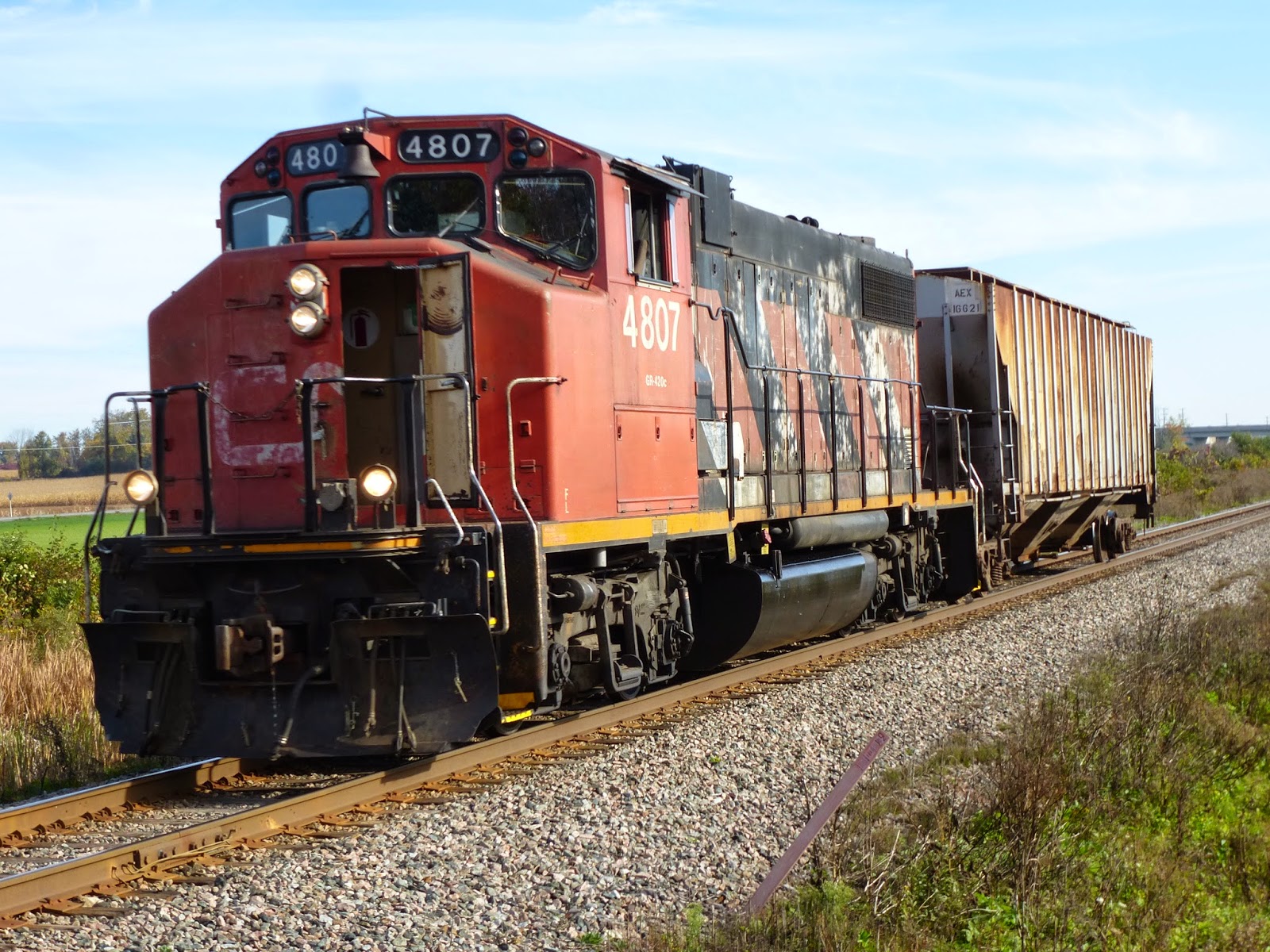 Above: CN 589, with one car in tow, approaches the Moodie Drive crossing on Sunday, Sept. 28.

In April, I was lucky enough to catch 589 led by a GP9 and pulling three covered hoppers. In June, the local was flying solo, with just a GP38-2 flying down the tracks to pick up a empty car at the Kott Lumber facility on Moodie Drive. On Sunday, I was able to catch an actual train, albeit a short one. CN GP38-2W 4807 was making its way toward Moodie Drive (above) with a single covered hopper. The early morning sun was tough to work with, but I was happy with my shots at Moodie. Someone close the front door! 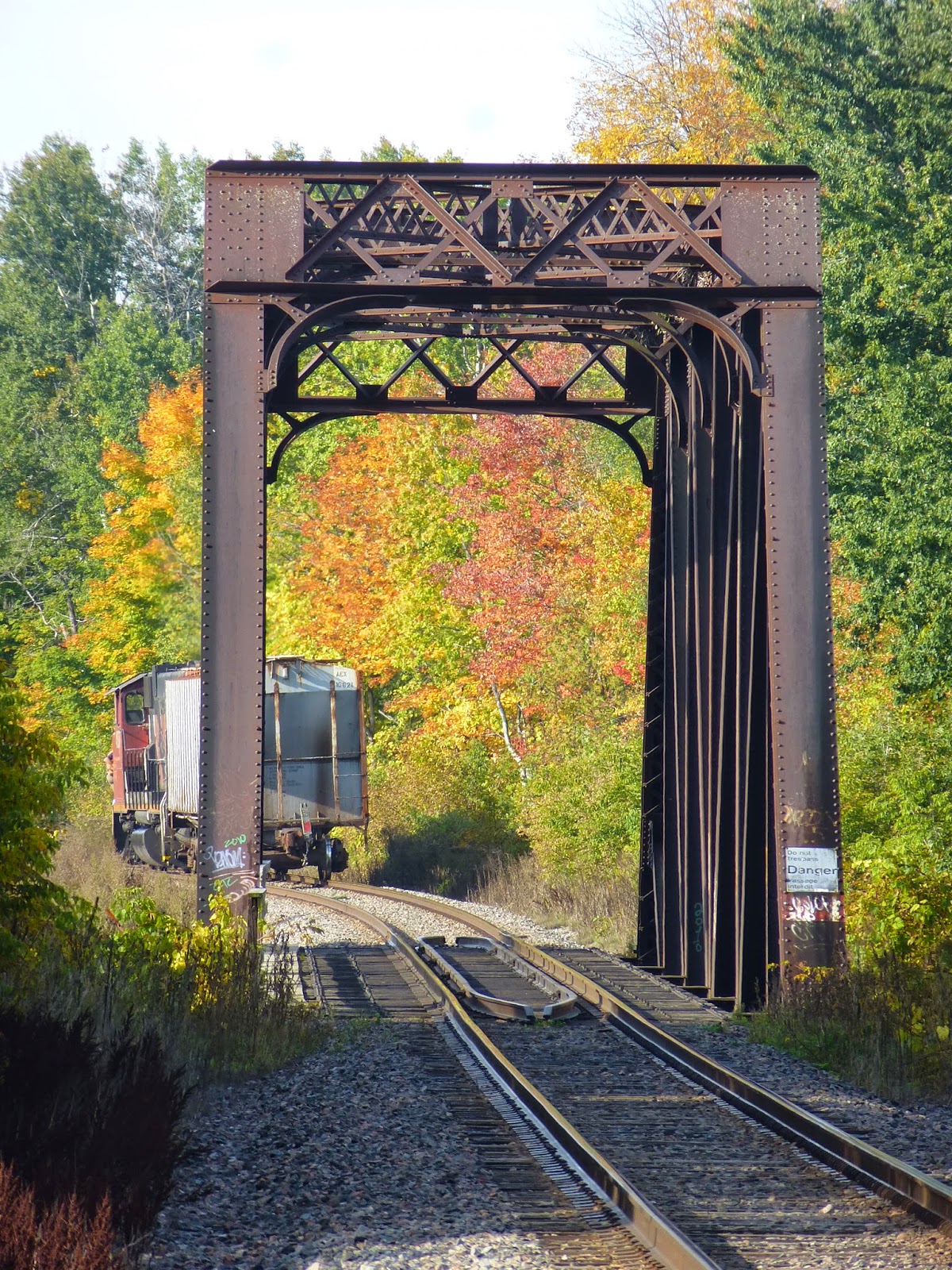 I didn't stay at the Moodie crossing long, but I did manage to get a few shots through the Jock River trestle (above), since the area is incredibly scenic in the fall. I was happy with this shot but I hustled further south to rural Cambrian Road, which leads to a rural four-corners called Twin Elm. This is a jewel in Ottawa's southwest, site of an old school house and the SynAgri mill. I got there while 589 retrieved the centre beam lumber car from Kott. All this action at Kott is hidden from view in the summer due to the thick foliage around the right-of-way. 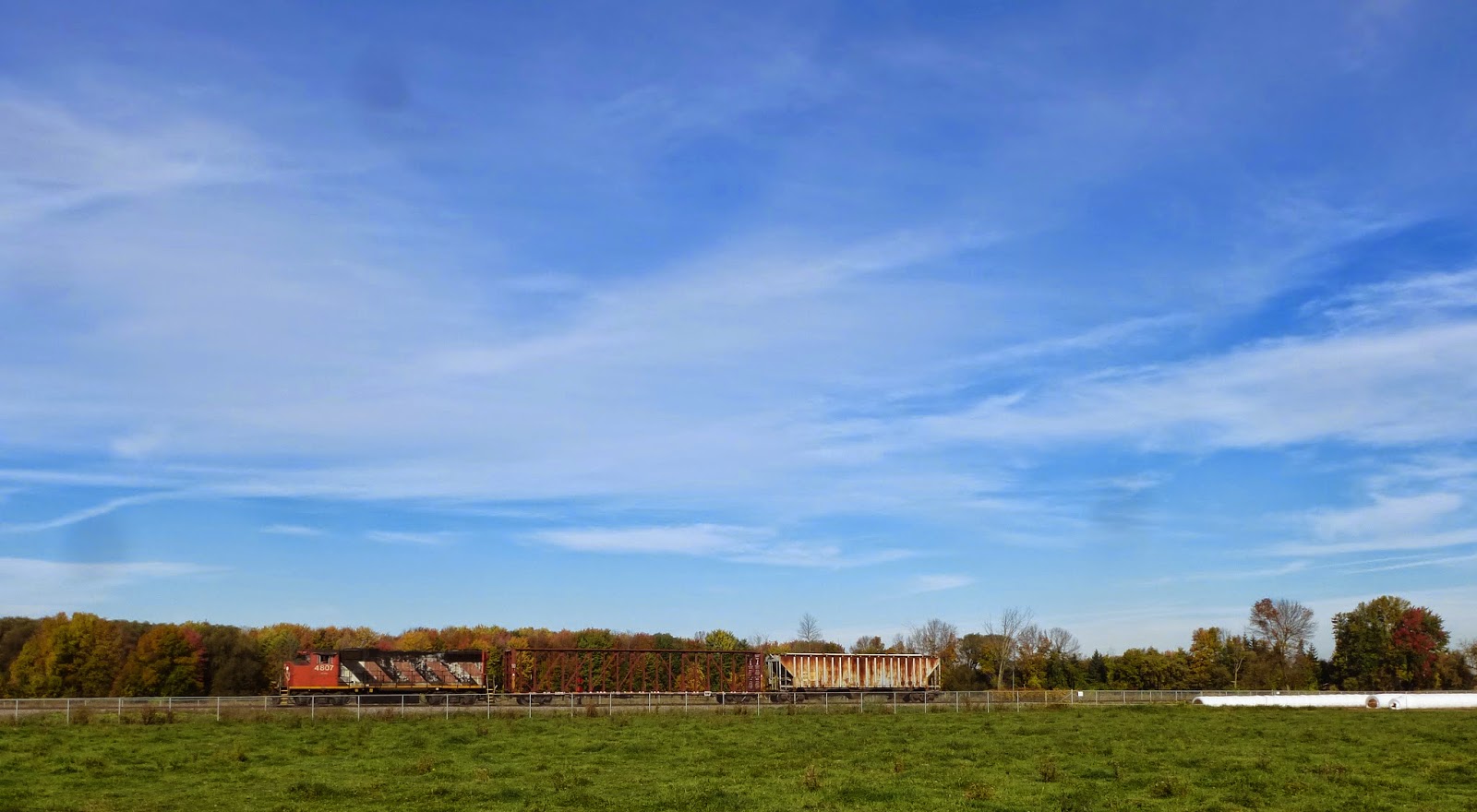 I set up a fair way back from the Cambrian Road crossing, since I was hoping to get a full train shot amid the rural landscape. The crossing signals were activated before I saw 589 come into view. The crew had the engine hustling, since there were no cars to switch at SynAgri. I was really happy with the shot above, since it captures the essence of rural Twin Elm. 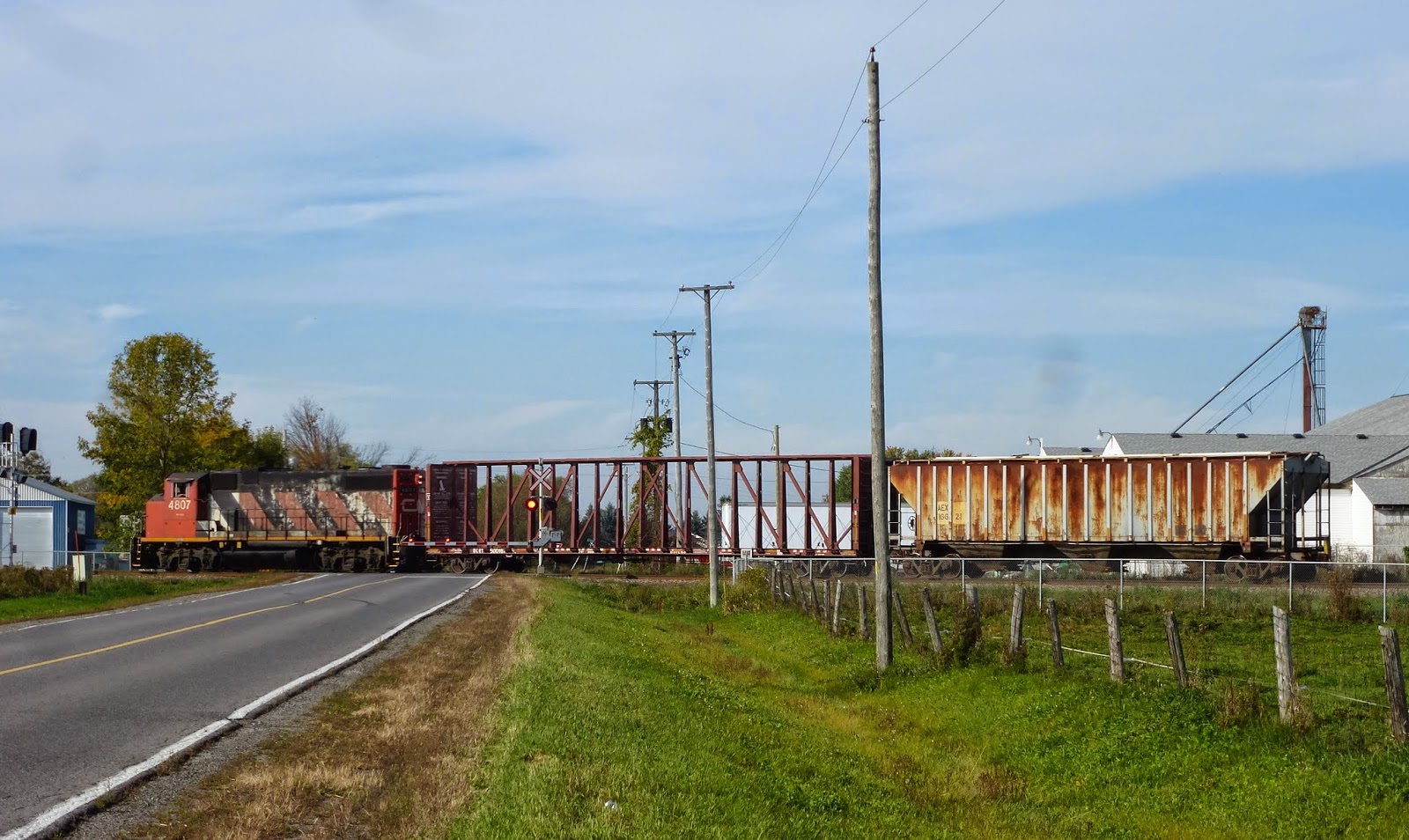 This shot, above, betters captures the actual Twin Elm hamlet. You can see the SynAgri feed mill on the right. On the left is a garage for a paving company. Not seen behind the garage on the left is a rural school house. And with that, my morning was over. 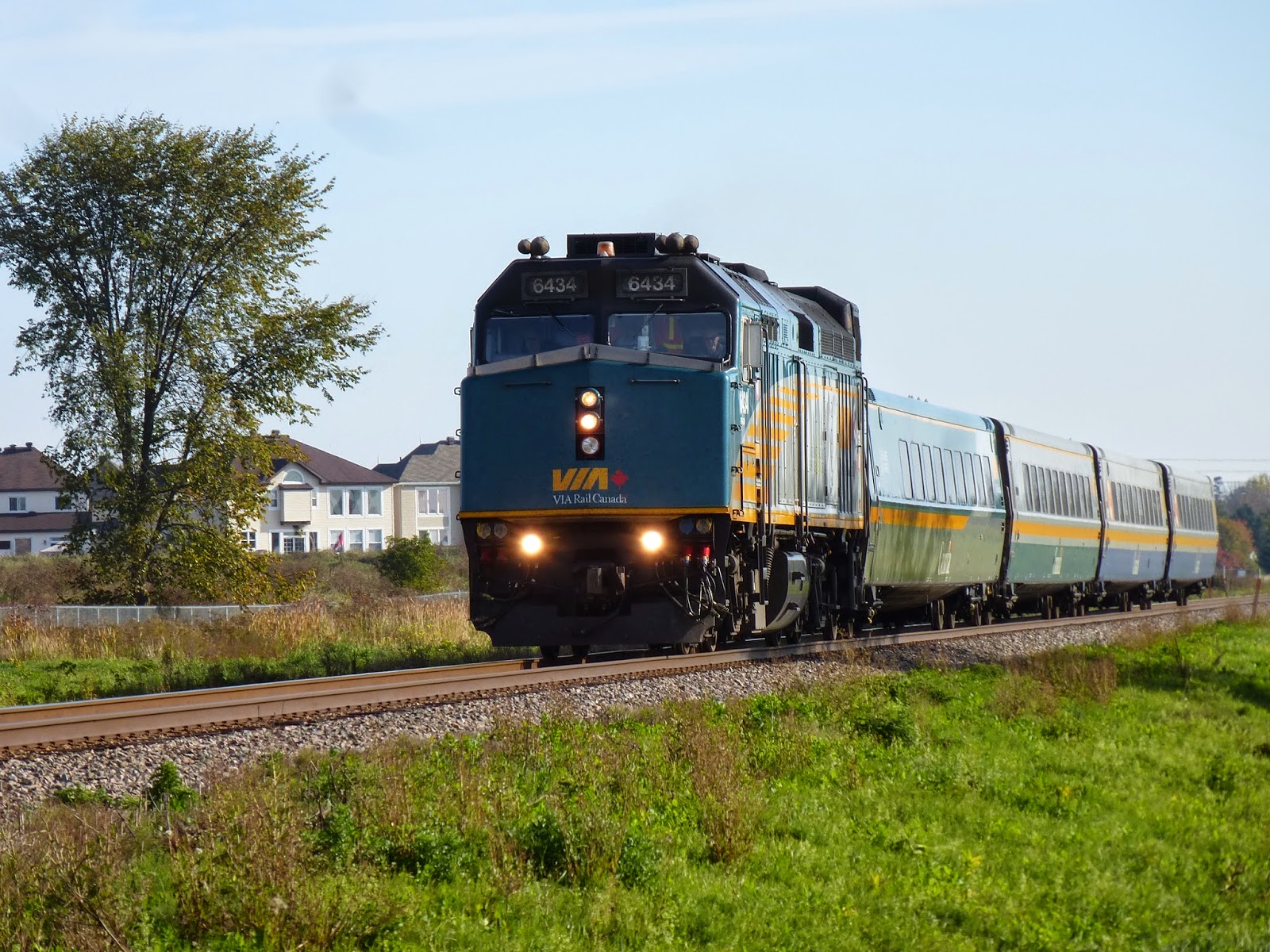 As a bonus, I thought I'd throw in a shot of Via 643 approaching the McKenna Casey crossing on the edge of Barrhaven. You can see the shadow of a nearby tree crossing over F40PH-2 6434 and the first class car. The engineer was nice enough to wave. I don't think the crews get too many fans in Ottawa.
Beachburg Subdivision Update
It looks like the end is finally near for the remnants of the Beachburg Sub north of Nepean Junction. A Beachburg Sub reader Alex pointed out that the CN continuous welded rail train was in Walkley Yard in Ottawa earlier this week. A friend of this blog, local rail historian and author Ray Farand told me that there is a little stretch of welded rail left on this line in the Pontiac Region in Quebec. He suspected that the train will collect the last bits of the welded rail. The remainder of the line is bolted rail, which he guessed would be removed and laid out along the right of way to be collected later by truck. Either way, I am going to find time later this week to try and catch this work being done while the tracks are still in place. I would encourage any local readers to get out there and do the same. I would love to share some photos of this work if I can. Anyone who catches anything and would like to share it can reach me at hammond.michael77 AT gmail.com.
﻿
Posted by Michael at Wednesday, October 01, 2014
Email ThisBlogThis!Share to TwitterShare to FacebookShare to Pinterest
Labels: Barrhaven, Beachburg Subdivision, CN, CN 589, GP38-2, Jock River, LRC, Ottawa, railway, Smiths Falls Subdivision, Twin Elm Ontario, Via Rail

Fantastic catch here Michael and great pictures also. This made for a great autumn scene in Ottawa. Very interesting news on the Beachburg sub as well, I wonder why CN decided to take this long to finish the job.

Thanks for the comment, Michael. I suspect CN took so long to scrap the rest of Beachburg for two reasons. One, there is very little CWR left on the line, which would be the most valuable part of that line fro CN. Second, the legal actions by the Pontiac Region to save the line held up any work on the removal for months.

Wow, I'm surprised they were able to hold it off for that long, good on them. Were you able to find work being done on it? I live very close to the Beachburg sub and I heard the horn yesterday and today which is very unusual so I suspect work has already started.

Glad to see you had Sunday railfanning success, Michael!
Eric

Thanks, Eric, for your comment. It's always touch and go on a Sunday. At lot of effort for just a two-car consist, which must seem odd for folks who are used to watching busier parts of the system!

Finally completely caught up on the blog. Well done. I live in Barrhaven and my house is literally across the street from the tracks used by Via and the lone freight local. I can practically set my watch to their schedule and can get trackside at the bike paths in a matter of minutes. Nice that there is one on Sunday.

This summer, I was...erm...in lack of employment, so got to know the local freight. The same run occurs on Tuesdays between 11:20-11:30, shortly after the last Via runs into Ottawa until the afternoon activities. The return trip is typically an hour later, more or less, depending on what work needs doing.

I did quite a bit of recon over the summer to warrant a blog post. I have some great photos too.

Don - whether you're a new reader or a returning reader, welcome. Thanks for your comments. I am encouraged by the number of Ottawa readers that are keeping an eye out for some railway action in Ottawa. You're always free to share what you have.

CN 589 is going through Kanata now with centrebeam flats of lumber headed to Ottawa.