Meet me at the station

I had an interesting experience in Smiths Falls recently, which saved what was otherwise a disappointing day trackside. I found myself with some free time recently and decided I would either head to Prescott or Smiths Falls to catch some trains. Prescott promised many more trains on the busy CN Kingston Subdivision, but there were no really solid spots to set up and get the shots I wanted. And Prescott was farther away. Smiths Falls was indeed closer but promised far fewer trains on the somewhat light Winchester Subdivision. I made my decision that I would try my luck in Smiths Falls since there were great sightlines on either end of the CP yard, not to mention a safe, shaded railfanning bench to sit on and read while waiting.

What I hadn’t thought of was that the yard and the mainline would be quieter than usual, due to the Saint-Jean-Baptiste holiday in Quebec, which shut down just about everything in the province and likely whatever was happening at the end of the CP line. That meant I saw no mainline freights coming through the yard, which was really disappointing.

However, I did manage to see the Perth turn head out of the yard with ECO unit 4301 pulling a sizeable string of tank cars and covered hoppers for the OMYA plant in Glen Tay. I have caught this train before, so it was a decent consolation prize to see it again. I will share photos of this train next week.

There were two interesting factors that made the day unlike other trackside experiences I have had in the past. One was there were other railfans at the old station, waiting to see something like me. They had a scanner, which was a bonus for me, since I usually don’t use one. I generally really on watching signals. I don’t usually encounter other railfans when I am out there trackside. In fact, I think this might be the third time I have ever run across fellow photographers since 2009, when I rediscovered my trackside pastime.

After a while, it was obvious that all we were going to see were Via Rail corridor trains, which was not worth the drive for me. But then something interesting happened. A westbound Via stopped on the outside track in front of the old station, as it waited for an eastbound train to clear the switch from the Via Brockville Subdivision, just past the station. 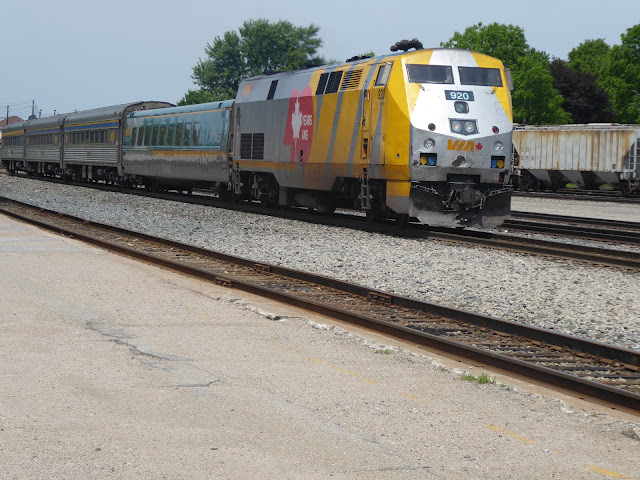 This was the first real meet I have caught in several years (not counting shots of multiple trains at Via’s Central Station). Two for the price of one is always fun. The other railfans sitting near me didn’t even bother to get up and take shots of two earlier Via consists that came by, each pulled by a F40 with typical LRC coaches. I don’t blame them. I took a few shots, but neither had anything worth sharing. The angles, track curvature and trackside buildings offered some new elements, but I didn’t have anything I was thrilled with.

But then at the back of the stopped train, I spotted something that I had never seen. This consist had some stainless steel streamliners, which is always a bonus. But one of the stainless steel cars was adorned with Via’s unfortunate renaissance colour scheme. I was the first to catch this and point it out, which had the other railfans up and taking photos. 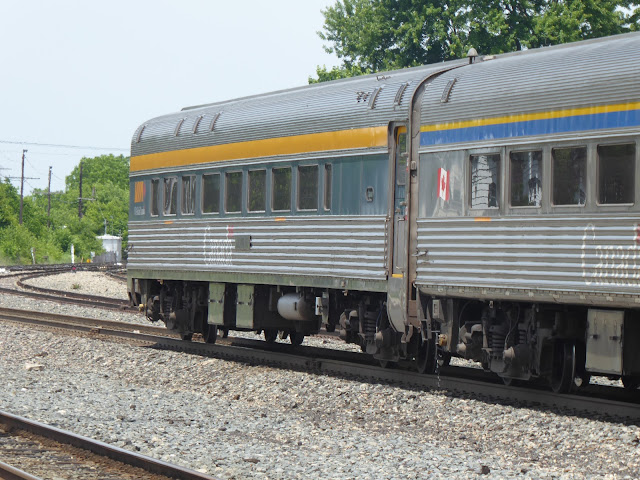 The eastbound train came soon enough, which allowed me to get a few cool shots of the meet between two wrapped P42s. It’s not what I was hoping to come away from my free morning trackside, but it was something new, which is always a good thing. 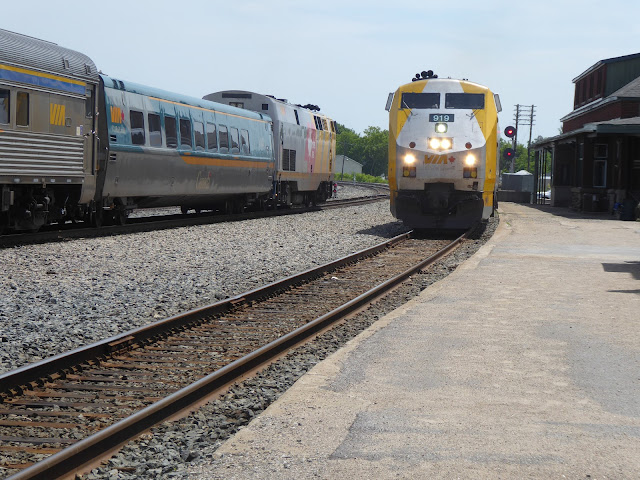 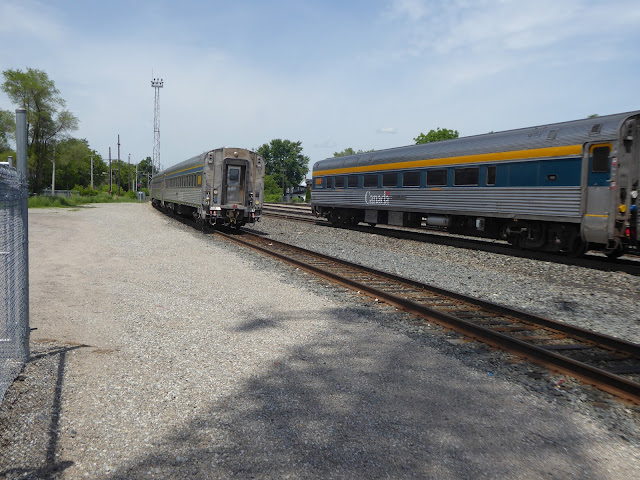 Thanks for sharing your Smiths Falls shots, Michael. CP seems to be a hit or miss proposition these days.

The new VIA scheme and refurbished interiors? VIA car attendant I talked to seemed impressed. I have yet to see one inside or outside here in Kingston.

Thanks for your comment, Eric. The new colour scheme on the old stainless steel equipment will take some getting used to. I wonder if it will all be a moot point when the new Siemens equipment arrives. Perhaps then all Via equipment will don the Boston Bruins/Pittsburgh Steelers yellow and black?

Yes indeed Michael, I would fully expect VIA to break out their child's paint box of colours for the Siemens equipment. At the height of VIA's rainbow era, at least the equipment types were similar, with CN, CP and VIA schemes. Now the various schemes can only mix in limited ways, otherwise the results would be even more disparate!