On my lunch break a month ago, I made my way to the western portal for the new O-Train downtown tunnel. I did it for no particular reason other than to get some photos of the new Alstom Citadis Spirit trainsets making their way into and out of the tunnel. Given I went on a brilliantly sunny day, it was easy to get a few shots from the overpass over the tracks that also houses the upper level of the Pimisi O-Train station. 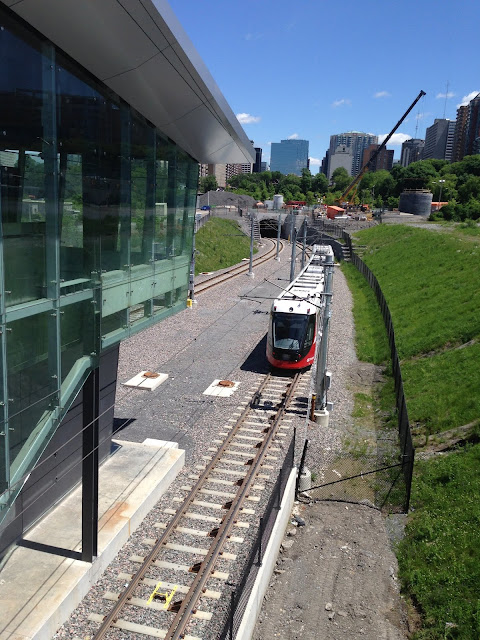 Eastbound O-Train makes its way to the downtown transit tunnel, as seen from Pimisi Station

I don't want to get into the messy history of this new line. The consortium building this new railway missed its completion deadline in the spring when the system was to be turned over the city so it could commence transit operations. That last delay meant it's been more than a year since this line was supposed to open to commuters. There are many, many different angles of this debacle that I could get into, but I'm growing really tired of blogging about it.

Now we're told that the city will officially take ownership of the line in mid-August and trains will roll in September. That's the last pledge, anyway. 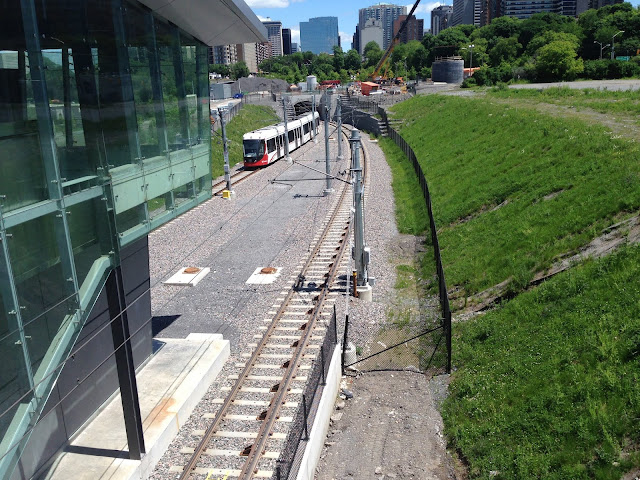 Ottawa LRT is a notoriously tight-lipped consortium that has repeatedly failed to explain to the public why it is taking so long to finish this project. The city, for its part, has also been notoriously vague regarding a number of aspects of this project, often giving maddeningly bureaucratic answers to the simplest of questions. The company that built these trains, Alstom, is trying to ease fears that these European trainsets will be able to handle the Canadian climate, even though they have never before been in use in North America and have so far proved to be unreliable at times.

As a communications guy, I will reserve my criticism for the mayor and councillors who have been trying their hardest to drum up any sort of excitement for this new line. The problem I have with their barrage of social media outreach about this rail line is that it is completely tone deaf. Every time I see a councillor's tweet with video of the new O-Train being tested, I roll my eyes. The tweets are usually accompanied by some sort of overly positive, hopeful comment about how we should all be very excited about commuting on these trains.

If I was in communications with the city, I would advise those around the council table to adjust their tone to acknowledge the fact that these delays are extending the grief for many people in the city. It hasn't made a huge difference to my commute, but for some, it's been a constant hassle. For the residents who live on roads where hundreds of buses have been rerouted each day, it's been a nightmare.

The constant barrage of positivity coming from the city is understandable, but misguided. When you have a project this far behind which is causing this many headaches, you can't fault the citizens of Ottawa for rolling their eyes and not getting on board with vapid cheerleading efforts. Instead of telling us all to don't worry, be happy, maybe a change is in order as we (possibly) approach the finish line. 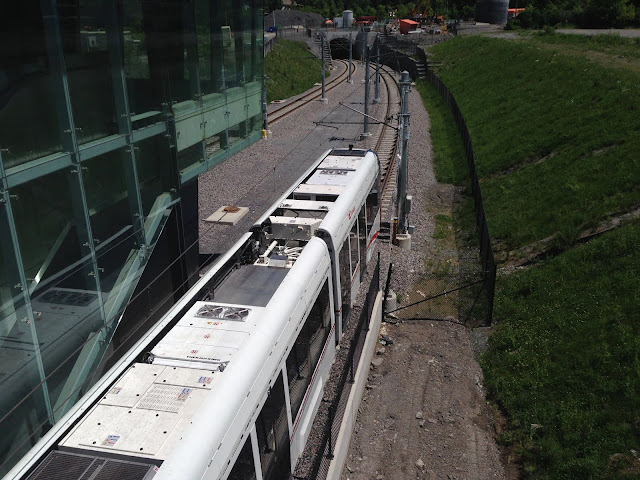 Maybe change the message to say we're sorry for these problems, but it will be worth it. I would appreciate that approach much more than what I'm seeing right now.

Program note: I mentioned last week that I would share photos and commentary about the Perth Turn, which originates in CP's Smiths Falls yard. I will share that post next week, but wanted to bump up this post, given that it now appears the LRT project may actually, finally be close to being ready.

I don't know. I have no faith at all that these will work out. They aren't tested in a North American winter for a reason - they won't work. That was big part of the initial delay in the spring. Frankly while i had no issues with the current rapid transit system operating within the transit way, I would be happier with things as is, as inconvenient as they are (and they are, like buses late routinely or those that don't show up - likely more because they don't run enough to handle peak times on routes). At least you know that with the current system it works, it's proven and issues can be rectified by sending another bus. Ultimately you'll get to where you need to go. With these train sets, I expect there will be plenty of days where people are stranded downtown and at the fringes and during the worst weather situations possible.
I won't comment about the council and mayor on this because I think it's self explanatory.

I just think they could have created a better Transitway for buses through the core and saved us all a lot of money. Focus on expanding the Trillium Line. This new east-west line is fatally flawed. Bad trainsets, bad Phase I planning, bad planning for Phase II. I can't for the life of me understand how Orleans gets service in Phase II (which they need) and Kanata/Stittsville does not.