As I mentioned last week, I recently had enough time that I was able to drop by the rail yard in Smiths Falls. Although the trip was a bust in that I was not able to see any mainline freights passing through, I did get to see a fascinating Via Rail meet in front of the old Smiths Falls station. But the highlight for me was seeing the Perth Turn take off from the yard. 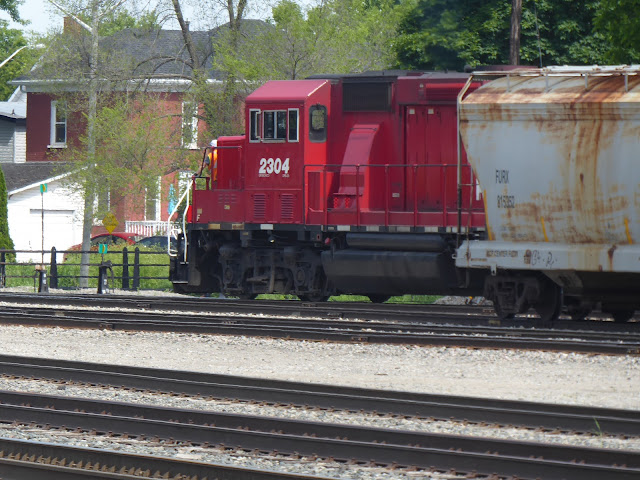 For those who might remember, I managed to catch a few shots of this train a few years ago, with two units. This time, the line of cars was being pulled by a single ECO unit, 2304. 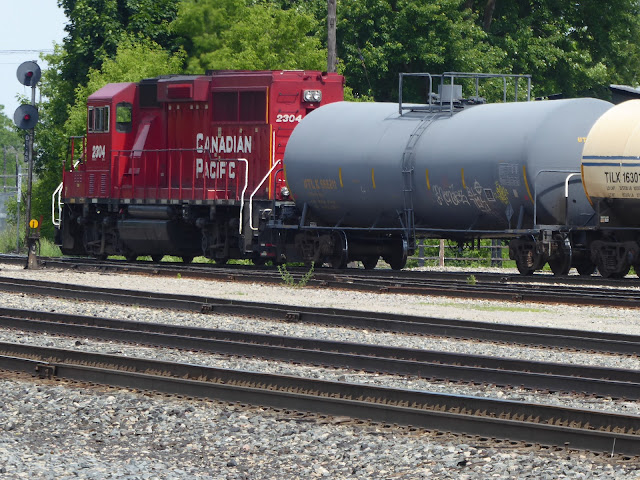 This train usually features a number of tank cars that you don’t often get to see on the rails. I have seen these cars sparingly elsewhere, but mostly in this yard.

Given my position between the old Via Rail station and the CP office building, there was only a series of going away shots to be had, which is okay. I have really forced myself to break free of the mold of the wedge shot whenever possible. 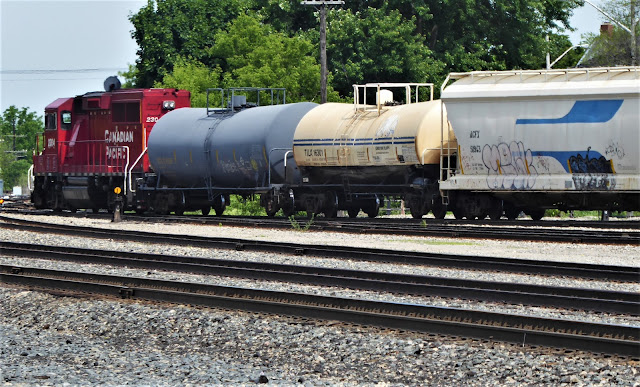 When the train pulled away, I noticed a number of the old OMYA logos on the cars had been painted over, since the cars are now repatched for SHPX (ACF Industries or American Car and Foundry). It’s too bad that the logo is gone, because it is extremely rare to see a company logo on cars these days. Companies have been moving away from owning or controlling fleets of cars. There are still a few branded cars out there, like the Potash hoppers, for example, but not a whole lot more.  I think back to some of the Sclair and DuPont hoppers I used to see in and around Sarnia when I was younger and how, even then, there weren’t all that many of these types of cars to see.

The run west to Perth is a fairly short one, as the train follows CP’s Belleville Subdivision through Perth itself before ending its run at Glen Tay, where the plant is situated next to Highway 7. 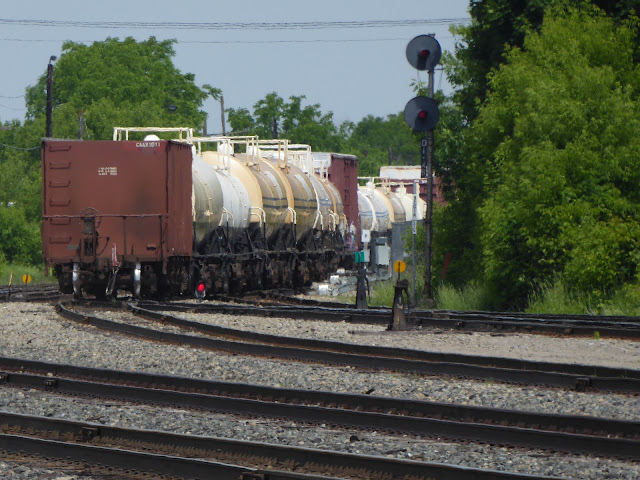 Sadly, this was the only freight train I saw this day as the Saint-Jean-Baptiste holiday in Quebec might have shut down some of CP’s operations there, thus lightening the traffic to and from Montreal, where CP’s operations end.

Still, a small local is better than nothing and I should add that this local is at least 10 times as long as the Arnprior Turn.

Also, there was an unexpected bonus to this train leaving when it did. It revealed another string of cars, some of which were intriguing enough for me to take some photos. I'll share those next week.
Posted by Michael at Wednesday, July 17, 2019

Thanks for sharing this dispatch from the freight car side of things.

No traffic because of the SJB holiday? Tres dommage!

Yep, I deliberately broke up the photos from that day. Hopefully, they will be able to carry an entire post on their own!

I remember seeing those white cars with the stripes in Bathurst and Miramichi, probably going to the paper mills that once operated there. I seem to remember they said JM Huber on them but I could be wrong.

Here in Ontario, I've only seen the OMYA branded cars, but it wouldn't surprise me if there were others servicing the pulp and paper industry in the east. I think it's a shame that we have so few cars out there now with any type of railway branding. They all seem to be grew and blank with some reporting mark for a leasing company. Shame.