Here's a breath of fresh air if you are a long suffering railfan or rail advocate in Ottawa. According to the Capital Current, the city is actually in talks with CN to purchase the small pieces of trackage it still owns in the city, which includes the tracks in and around Walkley Yard and the Beachburg Subdivision leading up to the old Nepean Junction.

The story notes that the talks are very preliminary but are a priority since the old CN line roughly parallels Hunt Club Road through numerous large subdivisions in the southern portion of the old City of Ottawa and in the western suburbs of Nepean. The story also notes that the talks will likely pick up once the discontinuance of service is made official and the line is offficially on the block.

The story itself has some curious statements. A city official told the Current that the city already owns the Renfrew, Carleton Place and Prescott trackage. But, back up a bit and that statement doesn't make a lot of sense.

Yes, the city owns the land for the Renfrew Spur, although not the actual tracks, which are owned by Nylene Canada in Arnprior. The city may "own" the Carleton Place trackage, but that is also a misleading statement, since no part of the old Carleton Place Sub is intact anymore. The last little bit in Bells Corners was ripped out to make way for a suburban street that will lead to an infill residential development near the Bellwood trailer park community. And the rest of the old right-of-way is now a recreational trail through parts of southern Kanata and the older part of Stittsville. The Prescott trackage, the remnants of the old CP Prescott Sub, are being transformed into an extention of the O-Train Trillium Line leading to the Ottawa airport and the Riverside South community. The trackage was still used occasionally to spot cars at the NRC research facility near the airport. Beyond that, the line was ripped up. 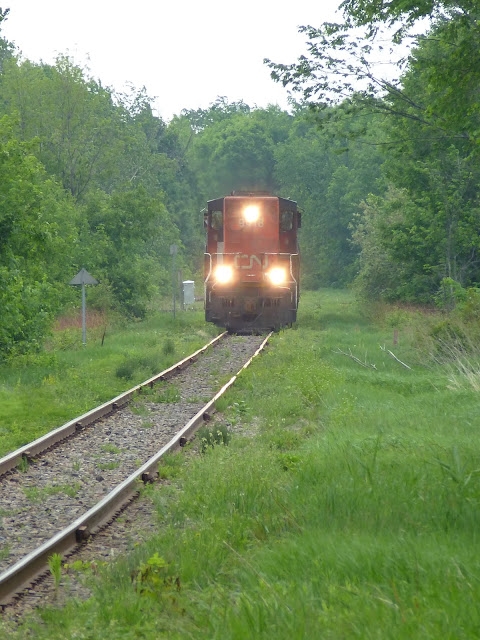 The story does point out that a government would be able to buy the rails at the salvage rate, rather than the going commercial rate. This is also a statement worth examining, because there was a great deal of controversy when the Pontiac municipality in Quebec desperately tried to salvage the old CN tracks within its boundaries, but found that the railway's idea of "salvage" rate was exorbitant.In other words, the municipality thought the price was set far too high, as a way to lift the rails and use them elsewhere on the CN system.

I have to ask, if securing these tracks was such a priority for the city, where were city officials several years ago when a portion of the Beachburg Sub leading into North Kanata and beyond to Fitzroy Harbour was torn up? What a waste of an opportunity to connect Kanata via rails to the rest of the city. As it stands now, Kanata will have to wait for Stage 3 to get light rail while much of the rest of the city (Orleans, Blackburn Hamlet, Westboro, Riverside South, Crystal Beach, Bells Corners, Algonquin College, parts of Nepean) will have rails within close proximity when Phase 2 is complete.

If I lived in Kanata, I would find that utterly unacceptable. 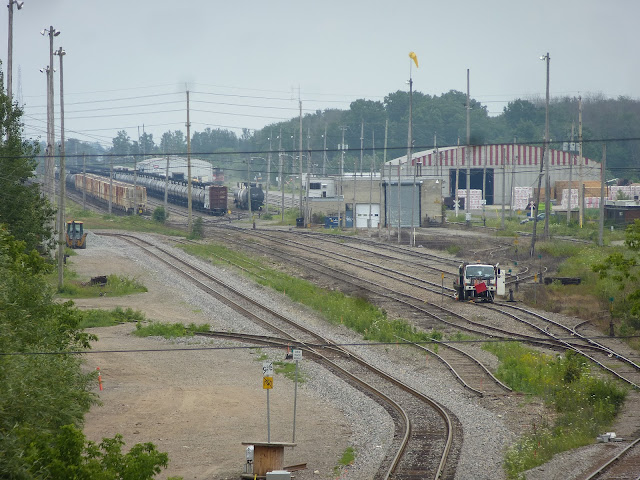 Councillor Shawn Menard did say that, "it is the city's intention to acquire these lands." I just hope that means for rail purposes. As we know all too well, once the rails are gone, they're gone.

That raises the next question of what will happen to the remaining freight services in the city and Eastern Ontario. CN is clearly checking out of the region. I wonder if that means that someone like James Allen from the old Ottawa Central is looking at starting a scaled-down freight short line operation in the city that would provide freight services in off hours under a running rights scenario with the city. I also have to wonder if such an operation would even be worthwhile.

Although, it's important to remember that a short line could very well reach out and attract new business, since they are much better equipped to run this type of operation, compared to CN.

Any freight operation would require some cooperation with the city since the rails would have to accommodate both standard freight trains and light rail operations.

I suppose we can at least be content for the moment that the city is actually doing something constructive for once. In my opinion, they should have been taking this approach years ago, but what's done is done. Let's just hope that there might be railfanning worth pursuing in this city in the years to come.

Let's hope this is more than just talk, and that CN is willing to play ball at reasonable rates. It is a nice little Christmas present for railfans!

One can only hope... especially here in Ottawa.

Best case scenario is that the same arrangement on the Renfrew is done on the Beachburg.

As for who could operate it, if the new operator wishes to continuing to do interchange at Coteau, that will require federal charter or exemption (ONR has an exemption for its running into Northern Quebec). Other interchange possibility would be Smiths Falls to get around that.

I don't expect that there will be any passengers on that line within at least the next two decades since if the city chooses to do any transit focus, it will put the money and attention on completing the current line out to Kanata.

I like to read stuff like this but this is a dead duck in the water! The customer base is so small now and really not justifying rail service for Ottawa...

CN did a wonderful job on destroying the customer base!

I understand your thoughts on the matter, Brock. Many likely feel the same way. However, I have seen many, many examples where a shortline steps in and wins a whole bunch of business back to rail. It's happened in other places and I would not want to prejudge any arrangement without first seeing who's behind it and what they plan to do.

And I see your point, Dave. Coteau will be a tough interchange point, but so would Smiths Falls for customers east of Ottawa. Nothing would be impossible for an innovative shortline.

I think an independent shortline like the Ontario Southland could make a go of it. Ottawa is a big place. But are there many potential customers in Ottawa that aren't currently rail served? Would it be possible for local retailers with Ottawa warehouses to get rail service instead of Highway? I thought Giant Tiger had a distribution centre near the rail lines in Ottawa.

I'm not sure where the additional business would be, but with Amazon's new warehouse moving into the east end, that would seem like a logical place to start. Ship the consumer goods in on containers via rail and use trucks to bring it the final mile. That would work, if we had the proper facilities. Of course, I am no expert. To me, the goal should be getting hundreds or thousands of long-haul trucks off the highways and get them doing what they do best -- short haul or last mile delivery.

Is there any update on the city looking acquiring this rail line?

John F said . ..just to clarify about Ontario Northland operating trains into Noranda over the Quebec border, the ONR has a wholly owned subsidiary, the Nipissing Central, which was incorporated under the laws of Quebec. This subsidiary allows the ONR to legally operate inter-provincial service. There was “no exemption “ for the provincially incorporated ONR ( ex-T&NO). I don’t know if the Ottawa Central is federally or provincially incorporated, but it would appear if a short line railway company wished to operate over the Quebec boarder, it would either have to be incorporated under the laws of Canada, or incorporate a Quebec subsidiary. Also, VIA owns the rail line to Coteau with CN having running rights for freight service. Question whether if CN abandons freight service to Ottawa whether VIA will grant running rights to a new short line operator. Same problem with VIA for freight traffic Ottawa - Smiths Falls, but at least they are in Ontario.

The comment: " The city may "own" the Carleton Place trackage, but that is also a misleading statement, since no part of the old Carleton Place Sub is intact anymore. The last little bit in Bells Corners was ripped out to make way for a suburban street that will lead to an infill residential development near the Bellwood trailer park community."
is a bit premature.
The developer in Bells Corners is applying for a "developer lead secondary plan" to develop the land beside the trailer park. They are proposing using the old rail corridor to access Moodie at Timm Rd. It has not been passed so there is time to get some rationale thinking done at city hall. the link to the developers application is at:
https://devapps.ottawa.ca/en/search?s=activeOnly&t=1987%2520robertson%2520rd.&a=all&w=all&i=0&b=0,0,0,0&o=default&ob=asc