A brief glimpse of a tunnel train

So I can finally share the remaining photos of my trip to Southwestern Ontario, with this one final post. If you've been following along with my recent posts, you know that I had a couple of interesting encounters with freight trains along the Strathroy Subdivision this summer, one at Mandaumin Road and another at Camlachie Road. There might actually be one more post of odds and sods from my summer wanderings, but this last post is pretty much it.

This summer, I spent a week playing chauffeur and defacto camp counsellor to my two daughters and my nephew, a train fan. So, at the end of the week, after I had taken them to a downtown museum, I made sure to take a quick peak at the rail yard, since it is not too far from the downtown. When I arrived, I was treated to this site.

Three large diesels appeared to be positioning cars in the yard for a run down to the St. Clair Tunnel. Or possibly this was just routine switching, but my guess is this was a pre-tunnel movement, given the size of the consist that was being maneuvered. Anyway, the harsh sun wasn't doing me any favours, but there was nothing I could do. This is the only legal spot to take photographs of the yard. Sadly, it is almost always like this in the afternoon. I decided to get a shot with the gantry prominently featured. 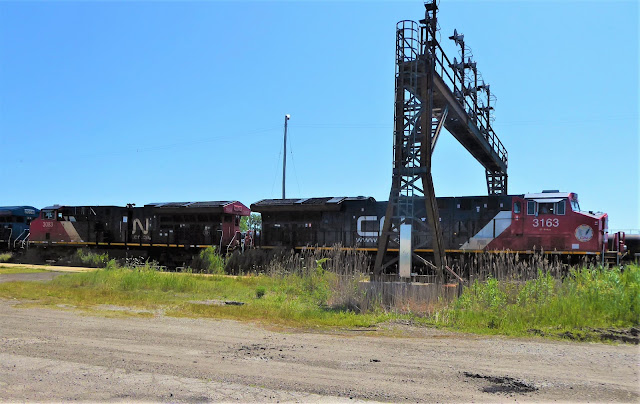 I made sure to take an up-close photo of the logo on the nose of 3163. The crew inside the cab didn't seem all that fazed by my presence. You can also clearly see the railway coding beneath the number. Can someone share what EF-444zc means? I seem to recall someone saying somewhere that it has to do with where the engine is serviced? Is it also an internal CN way of labelling its diesels outside of the manufacturer model name? 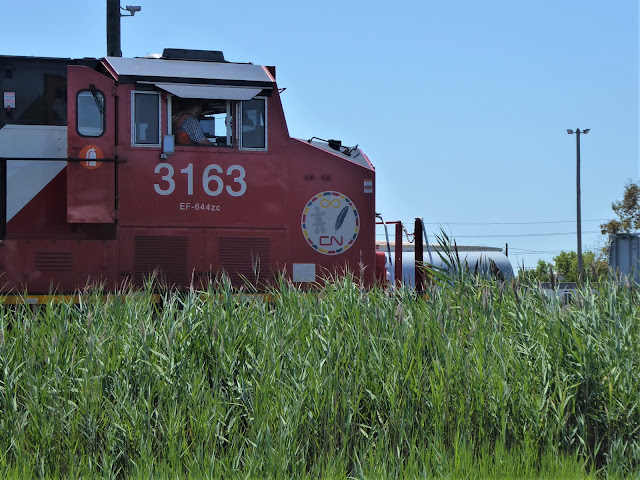 This was also a cool catch. CN doesn't have all that many leased units roaming its system, judging by the reports I've read about its business slowdown. This unit was the third in the lash-up. Look at the exhaust fans at the rear! This shot really accentuates just how large they are.

This lash-up seemed like a lot of power for switching, which made me think the crew was putting things together for a run through the tunnel. Although, true to the PSR way of railroading, even the crews of the mainline freight trains are required to do switching at the end of their shift if they have time remaining, right? I remember reading that in an article somewhere about the E. Hunter Harrison-led railways. Someone with more knowledge can clarify or correct me if I'm off base. 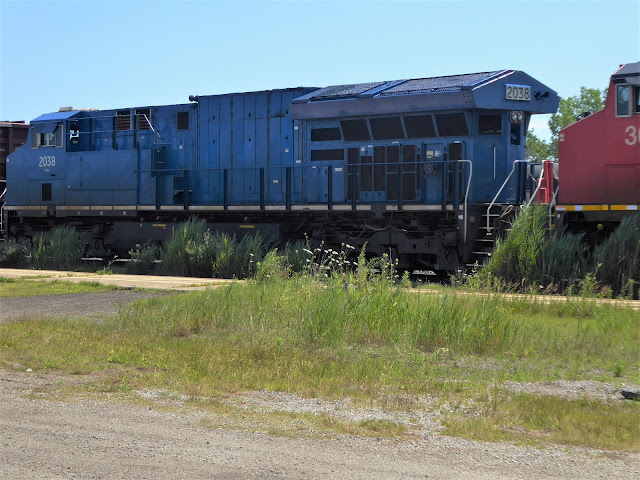 This shot below might be one of favourite shots of the year. I tried to get the flags and the station in the frame along with the train. The shadows were harsh, even after some colour correction, but I still think this is a really cool shot. 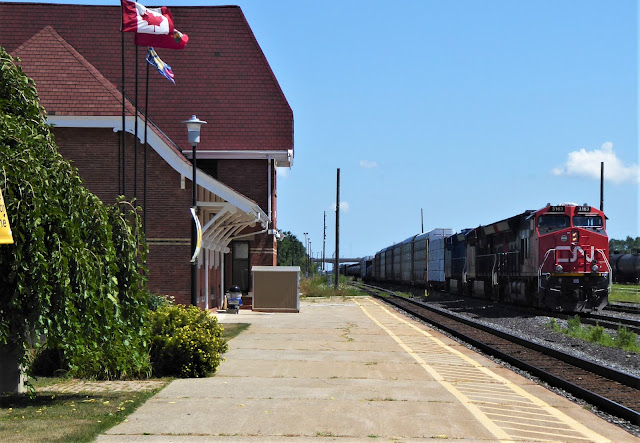 Here's a close up of the train as it continued to back up into the yard. The heat lines show you that it was quite a warm afternoon when I took this shot. You can also see the exhaust from the engines obscuring the light standard behind the train. My nephew was pretty happy to see this action. My girls were somewhat interested, since they don't see trains very often. After a few minutes, I turned the car toward home and left, thankful to have a brief glimpse of this consist. 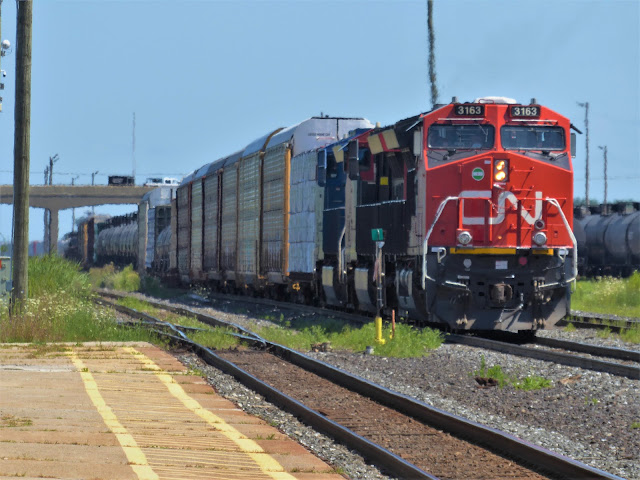 There were a number of interesting things at the roundhouse, which is somewhat visible from the station parking lot and I got a few decent shots, but I think I will save them for a future random post. I actually have a fair number of random shots from readers that I think I will package into a few random posts. Stay tuned for those. There are some pretty cool shots to share, including a train full of windmill blades.
Posted by Michael at Friday, December 13, 2019

According to my old (1998!) Canadian Trackside guide, CN's engine numbering is as follows:

I hope this helps,

Thanks Patrice! I should have checked my old Trackside Guide! That's great information.

Was wondering if and how one can get the schedule of CP trains via the internet.

That old identification system is not used for anything anymore. All the newest documentation to the crews use the actual ES44AC/ET44AC models. It's a wonder why it's even on the side of the cab.

Interesting stuff, gents. I always scratched my head at those classifications.

And, as for the question about CP timetables, I have to say I really have no idea. There are a number of active railfans and those with operating knowledge of railways that can give you a good idea of what to expect from different parts of a railway's system. I get most of my operating information about Ontario operations from a reader with inside knowledge of CN/CP operations. For example, I know he CP Winchester Sub sees about 8-10 trains a day, because more active railfans in this region have told me this and my friend who has inside knowledge confirmed it. That's about all I can say! Wish I had better info for you!