Images of the tunnel accident aftermath

This really hasn't been a great year for Canadian National, has it? The railway that just recently had to lease dozens of locomotives just to keep up with an unexpectedly large uptick in demand found itself in the doldrums, somewhat. Of course, everyone knows about the eight-day strike that really clogged up yards and left customers in a lurch in late November. Then there were the layoffs when business began to falter.

But, for my money, the truly compelling story is the messy late June crash of a train in the middle of the St. Clair Tunnel between Sarnia and Port Huron, Michigan. A reader reached out to me anonymously with information about that crash. This reader allowed me to share what they had gleaned, on the condition that I not reveal anything about where this information came from.

So, for what it's worth, the messy derailment was, according to this source, likely caused by an unbalanced load in a gondola car, which derailed on a descent into the tunnel. I have no reason to doubt the veracity of this information, but I will caution that it is by no means an official explanation. So take it for what it is worth.

The crash caused a considerable amount of damage to one of CN's busier transnational routes that connects Eastern Canada to Chicago (via Michigan). The track into and in the tunnel had to be ripped up and the entire right-of-way regraded and relaid. Readers who follow this blog from Sarnia managed to share some photographs with me (taken from public vantage points). I was told the pedestrian bridge that links Sarnia's Chemical Valley with South Sarnia was barricaded to prevent people from watching the construction efforts. Considering this walkway is surrounded by chain link fencing, I have to wonder why the local police and the railway would go to such lengths to hide these activities. Yes, this was an embarrassing accident, but preventing access on a public walking path is unfortunate, if it was guided by anything other than safety concerns.

After round-the-clock efforts for the better part of a week, the tunnel was reopened to traffic, which allowed the refineries in the valley to clear the backlog of cars on their spurs.

So, with the help of some folks in Sarnia, includng my brother, here are a few shots of what happened after the derailment. Some of these pictures were taken from the pedestrian walkway before it was closed off by local police. 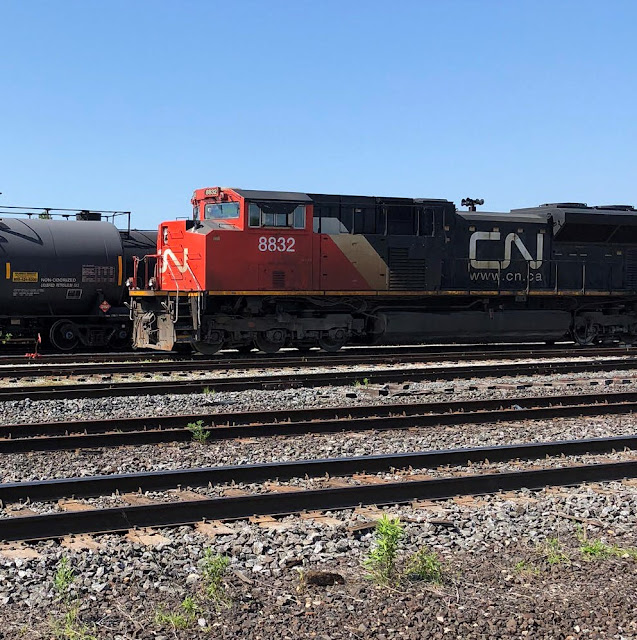 The above image is of a road unit with two damaged couplers. I'm told this might have been one of the units in the accident, although I don't know what the head end of this train sustained any damaged or derailments. Take this image for what's it worth. It was indeed taken right after the derailment.

Another shot of the unit with damaged couplers. 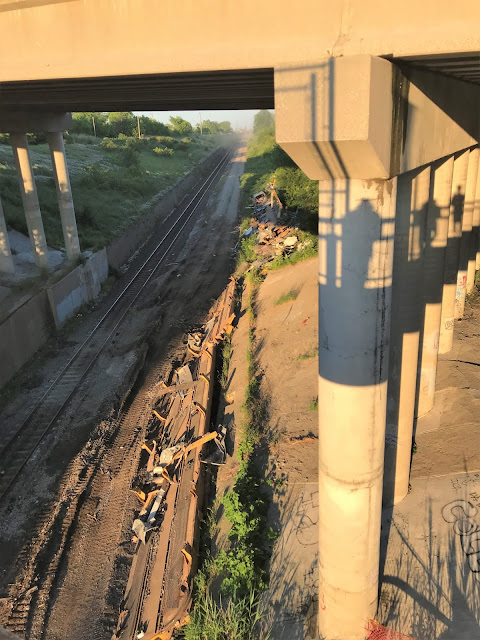 Shot from the Donahue Bridge walkway, this is the main line looking east toward the rail yard. You can see the debris on the side of the tracks. 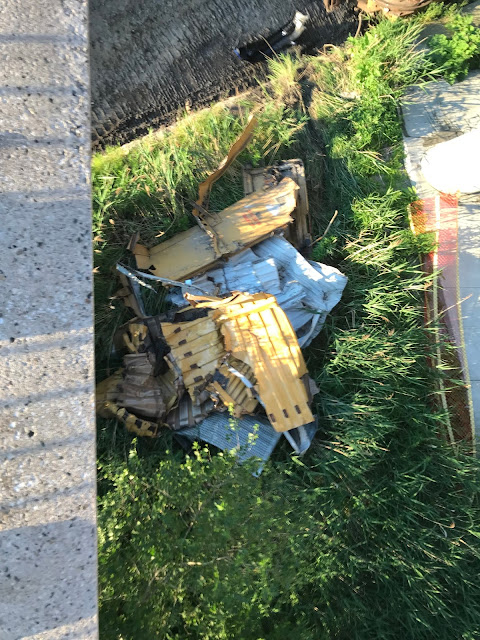 That looks like shredded pieces of an autorack, shot directly overhead from the pedestrian walkway. 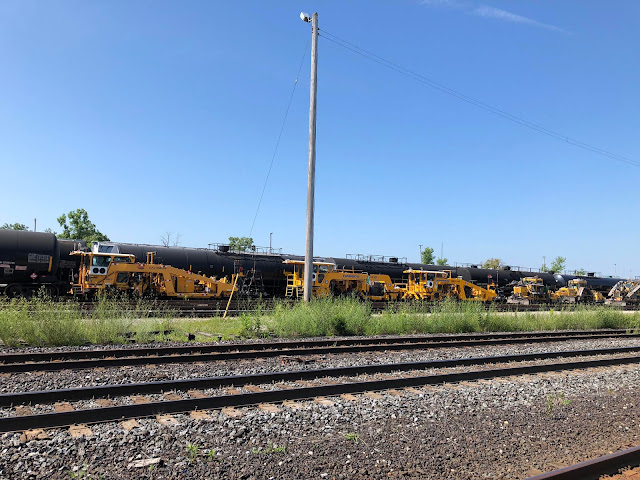 A fleet of maintenance-of-way equipment ready for action.

This is a shot of the rebuilding efforts from the edge of the pedestrian walkway after it was closed. As you can tell, getting a clear shot of the repair efforts was tough at this point.

You can clearly see from this image that the tracks are long gone, with construction equipment busily working to fix the grading. 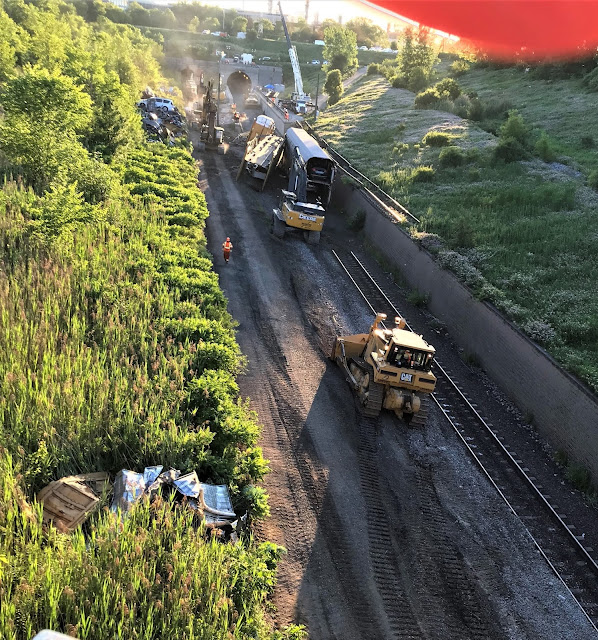 This might be my favourite shot. On the evening of the crash, a reader went out around sunset to catch some efforts to pull cars out of the tunnel, including these autoracks. You can also see shredded debris on the lower left.

My thanks to everyone who ended up getting these unique shots. Thankfully, no one was hurt in this accident and everything returned to normal in short order.
Posted by Michael at Friday, December 06, 2019

21st century derailment cleanup is definitely a no-holds-barred effort, unlike earlier decades where salvage was encouraged and more time taken. Now it's all about getting the line open - especially in your example!

No hold barred, indeed. My friends in Sarnia called it an army. There were people and equipment everywhere.

There was some discussion online (including some participants from Sarnia) that the damaged locomotive you showed pictures of was the Mid-DPU on that train. Apparently the drawbars got ripped out of it in the accident.

I heard that too, Brad, but I'm not sure I've seen DPUs on the Strathroy Sub. Granted, my sample size is quite low, but most of my connections in Sarnia tell me the same thing. But, it would make sense, given the damage on that unit.