No one can deny that railways are a dirty business. Sure, locomotives today operate more efficiently than their predecessors by a mile. For all that the railways make of the green nature of their business, it's not exactly like driving a Prius. These massive locomotives need serious power to pull their consists and this requires heavy duty diesel engines. That sometimes results in lots of smoke.

The shot below is one of a few I caught in October around Sarnia Yard as CN diesels went about their business. In this shot, these diesels are putting together a long consist, likely headed west for the tunnel and into Michigan.

I haven't caught too many shots of locomotives mid-smoke, so these shots I thought were worth grouping together. You can't tell by the direction of the exhaust in this shot, but this train was actually backing up. It just so happened that the wind was blowing pretty swiftly in the direction of the train's backward move. The lead unit in this consist is CN C44-9W 2670. The majority of the smoke appears to be coming from the third unit. 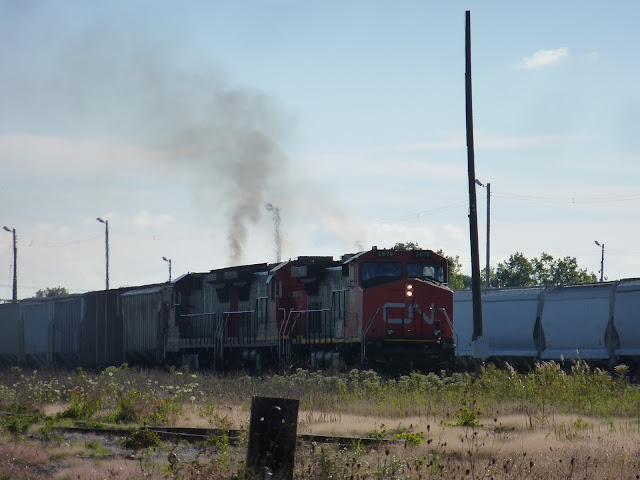 Here's a closer shot, with a little more colour correction. I like how the exhaust is bluring the light standard behind it. I had a tough time shooting due to the angle of the sun, but you have to take what you can get sometimes. There really is no way to catch these trains on the sunny side in the late morning from this vantage point. You may notice a piece of equipment in the foreground that was once used to service the old heavyweight passenger cars. That track is now ripped out from the side of the Sarnia station. 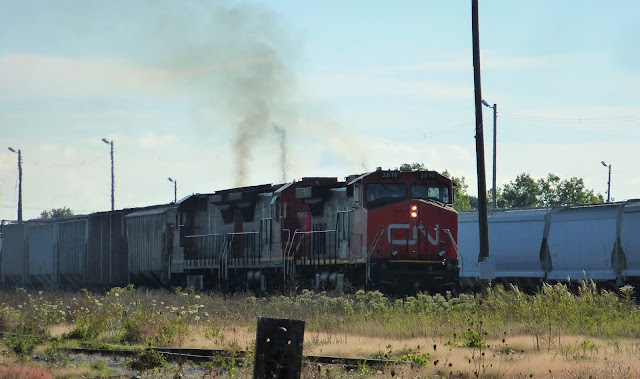 This might be my favourite shot from the weekend. This is a pretty typical scene in the yard, as a pairing of yard engines is shunting a cut of tank cars around. That initial moment when the units begin their shoving movement is always fun to watch as the engines roar and the plumes of smoke blanket the area around the front of the train. 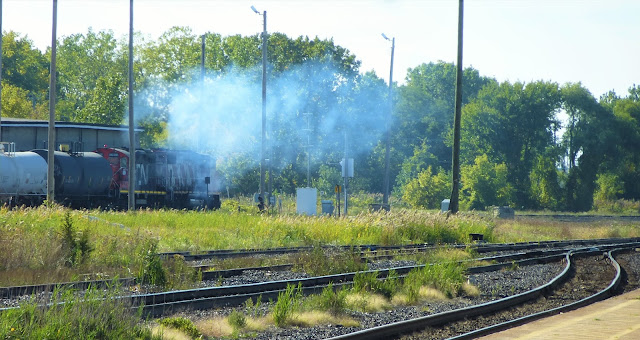 A moment later, the wind begins to dissipate the plume. These units are clearly working hard to get this line of cars moving. 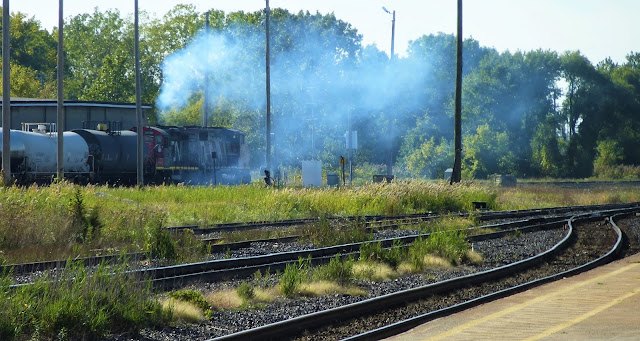 I zoomed in to get a closer shot of the locomotives in the aftermath. It was just a brief moment, but I was lucky to catch a few images of this movement. As much as I love catching a mainline freight screaming down the tracks, I really do love watching small yard jobs making moves like this. 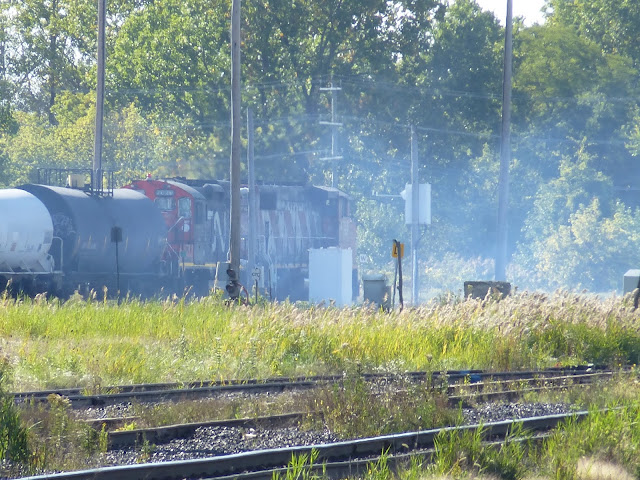 Throughout the year, I have tried to change my approach to photographing trains. This wasn't really a group of shots I was consciously trying to capture, but I'm glad I snagged them just the same since they offer a glimpse of how these machines work.
Posted by Michael at Friday, November 11, 2016

Nice! Something a little different. Even the modern units smoke at startup!

Photo sites that do not include shots like your smoky ones are doing themselves a disservice by not portraying the reality of railroading. The air-brushed not-a-cloud-in-the-sky perfect-composition shots get boring. These are not boring! Like we are there!

Smoke it up, Michael, smoke it up!
Eric

@Eric, I agree that it is better to have the smoke and the distortion it provides than clearing it up to ensure that you don't get an "image not in focus" rejection. :)

Indeed, Dave! As a blogger, doing an end-run around magazine editors and the like, I'm surprised that modern-day photographers want to submit to the same type of approval from an online photo site.

I'm glad Michael can post smoky shots like I can post 110-format shots on our blogs. And have a great discussion about it here, too!
Eric

Thanks for the comments, gents. If it wasn't for this blog, my photos wouldn't be accepted anywhere. I know my limitations. I'm not a pro photographer and I don't use terribly advanced equipment. Plus, I look at railways like I do rock and roll. It has to be a little messy to be good.

You should have seen the Dash 9 I had yesterday! Notch 3-5 under heavy load saw thick, black smoke just pouring out of the stack!

That's what I'm talking about!