Say what you want about Ottawa's Railway Station, but you can never accuse it of being boring. The station, which was opened in 1966, has always had a couple of factors working against it. But in the past few years, it has begun to gain a little respect.

Let's start with some surprising facts about this station. Did you know the Tremblay Road station has been open 50 years? That means it has been open for business just three fewer years than Ottawa's Union Station, which operated as the main railway hub in Ottawa's downtown from 1912 to 1966.

Did you know that the Tremblay Road station won a Governor General's Medal for architecture in 1967? Or that it was ranked as one of the 500 most significant buildings produced in the last century by the Royal Architectural Institute of Canada in 2000? Or that in 2007, it was presented the Ontario Association of Architects’ Landmark Award? Or that it was designated a heritage railway station in 1996, just 30 years after opening? Pretty impressive for a building that doesn't get a lot of love. 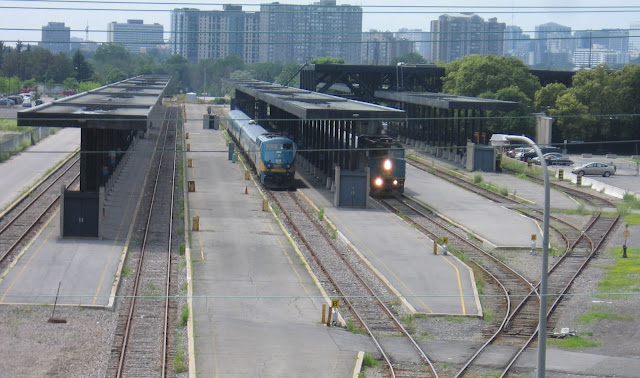 July 8, 2013 view of the platforms at Ottawa's Central Station as a Montreal-bound corridor consist eases out from the platforms. You can see the main building in the top right hand corner of this shot.

Many locals still bemoan the fact that the city's original Union Station was moved from the downtown to Tremblay Road, which is not exactly central like Via Rail's stations in Montreal, Toronto or Quebec City. The Tremblay Road station will also never measure up to the historic charm of the old Union Station, which is now the Government Conference Centre and soon to be the temporary home of Canada's Senate.

However, a few developments in the last few years promise to ensure that the Tremblay Road railway station gets a bit more respect in the years to come.

First, a pedestrian bridge has been built over Highway 417, which now connects the station to the neighbourhoods north of the highway, not to mention the city's baseball stadium, RCGT Park, home of the 2016 Cam-Am League champions, the Ottawa Champions (rather presumptuous name, but we backed it up with a championship).

Second, the city's Confederation Line light rail system is in the process of being built right through the station's property, which promises to directly link the Via Rail station to the downtown in a way that has been lacking since the station was built. Commuters will soon be able to board the LRT and get to the railway station without minimal fuss.

Finally, more than $21 million is being spent on ongoing renovations that will greatly enhance each traveler's experience at the station. Indeed, these are exciting times for the station. 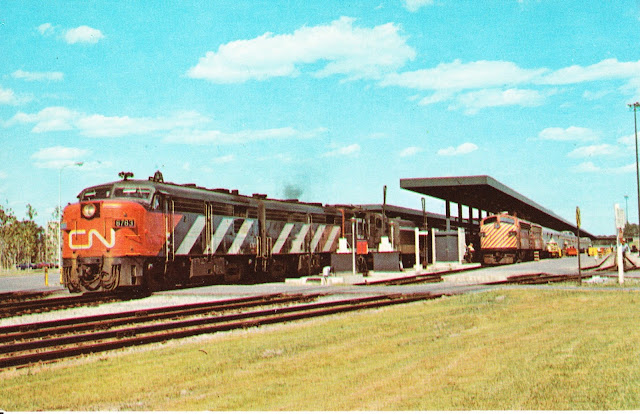 June 26, 1971 view from the west side of the platforms when both CN and CP passengers trains used the Beachburg Subdivision.

The most obvious change that travelers will notice at the station will be the platforms. They will all be raised so that travelers will be able to board their coaches without walking up any steps. This will replicate the platforms that Via Rail has at its Montreal and Quebec City stations. The other major change is these platforms will be heated. If you have the misfortune of coming to Ottawa in the winter via train, this scene below is what you might face when you get off the train 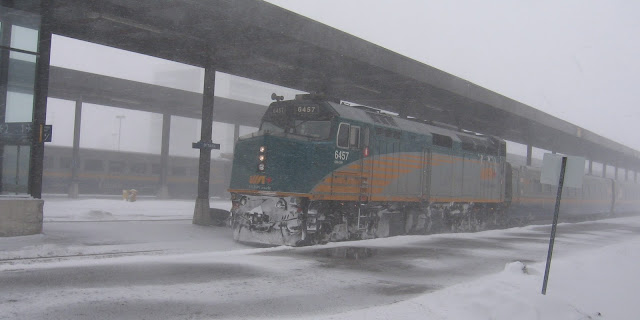 The image below shows you what the platforms will look like when they are finished next fall. 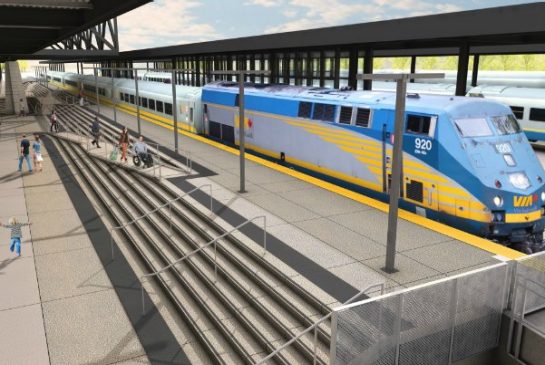 The station will also get new elevators that will improve access to the platforms. The station already has an aesthetically pleasing tunnel below the platforms, which ends with a massive and impressive circular ramp that you can take to the main concourse, if you decide to skip the escalators. I've done this a few times, just to prolong the experience a bit.

Beginning in November, the railway also boosted the number of departures from Ottawa Station by two, meaning that there are now nine departures to Toronto and Montreal each day. This station accommodates 800,000 travelers each year, making it the third busiest railway station in the country. 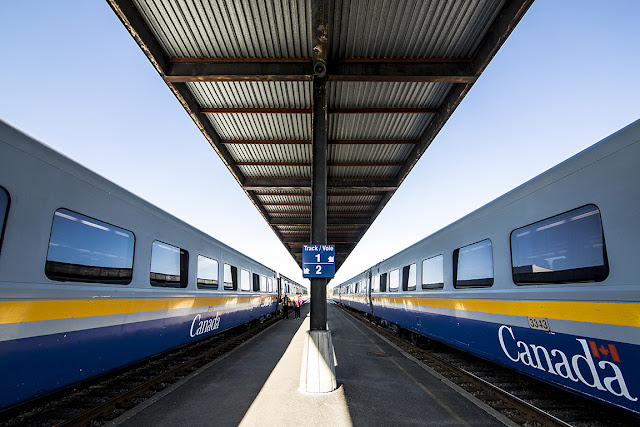 When you think of how much has happened in the past 20 years around this station, it's hard to believe that there was so little surrounding this depot at one point. For example, most local take for granted that Trainyards retail development. Some might not remember that much of this land was railway property and some of it housed railway tracks.

Closer to the station, a few office buildings have been built in recent years on railway land that sat unused for quite a long time. Up until very recently, there were a few dilapidated railway structures on the other side of the chain link fence that surrounds the station's tracks.

Even on the other side of the highway, a fair bit of retail development on Coventry Road has really quickened the pace of the area around the station. When you think of the pedestrian bridge and light rail connection, the disrespected station in the middle of no man's land seems to be a little less lonely these days.

Happy 50th Birthday to Ottawa Station. I often rave about Ottawa's old Union Station, but I have to admit I truly do like this station. Here's hoping it remains a busy fixture in the city. 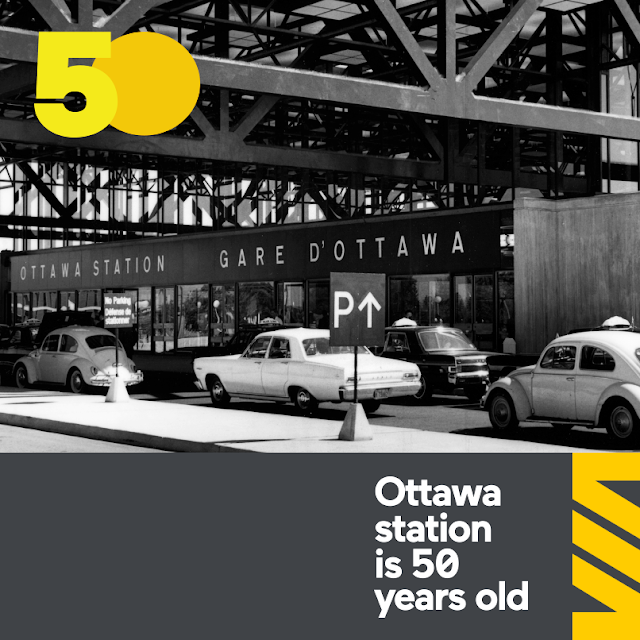 Seems strange that they would not add a complete roof over top of the platforms while doing this round of renovations.

OK Michael, you got me. I do have a newfound respect for the station. Hopefully the new design will be less windswept as your winter photo shows. I also really liked the pre-Ren LRC VIA publicity photo. I've been on that circular ramp. Definitely avant-garde design before the instant-gratification 21st century!

Thanks for the comments, Eric and Steve. Steve -- I think it's simple economics. A train shed would be ideal, but I think it's probably too expensive. Eric -- I have a lot more to share about this station, but I thought I would save it for another post. I really did change my opinion while writing this post. I always liked this station, but I didn't properly appreciate it for what it is, because I am partial to the old Union Station downtown.

I don't mind the architecture of the station. I've not seen any building like it. It does lack the central location of Toronto, but it is easier to pick people up there than Toronto by car.

Builtrite Bathroom Renovations is one of the leading company offering bathroom renovation services in South of River and Western Suburbs. We are committed to providing an extensive range of services to our clients utilizing the equipment and technological advances. Our trained and qualified team can assist client with various services such as bathroom renovation, plumbing, tiling and electrical.