Goderich 2014 Part II: Echoes of the past

I have raved about this town on Lake Huron several times, but I thought I'd revisit Goderich once more, after taking time to visit a number of its historic railway sites last August. You can read my first post about this trip here.

The town has a proud railway legacy that has not only been preserved, but celebrated. The first stop I made was to the city's beach, where the town's former Canadian Pacific Railway station has been relocated. The station was moved a few hundred metres last year, to make way for a new lake-facing restaurant.

The station still appeared to be undergoing extensive repairs over the summer. The developer wants to build a 300-seat restaurant with a 100-seat banquet hall. The opening has been pushed back a few times, due to the structural challenges of bringing this beautiful old building back into shape.

This station, which you first read about it this post, was officially opened in 1907 to serve as a western terminus to a CPR line between Goderich and Guelph. The station last saw passengers in 1956. The line used to host as many as three daily freights, with grain being one of its biggest commodities. The operations were officially discontinued in 1989.

Much of this information I learned simply by reading the numerous historic plaques around the harbour. 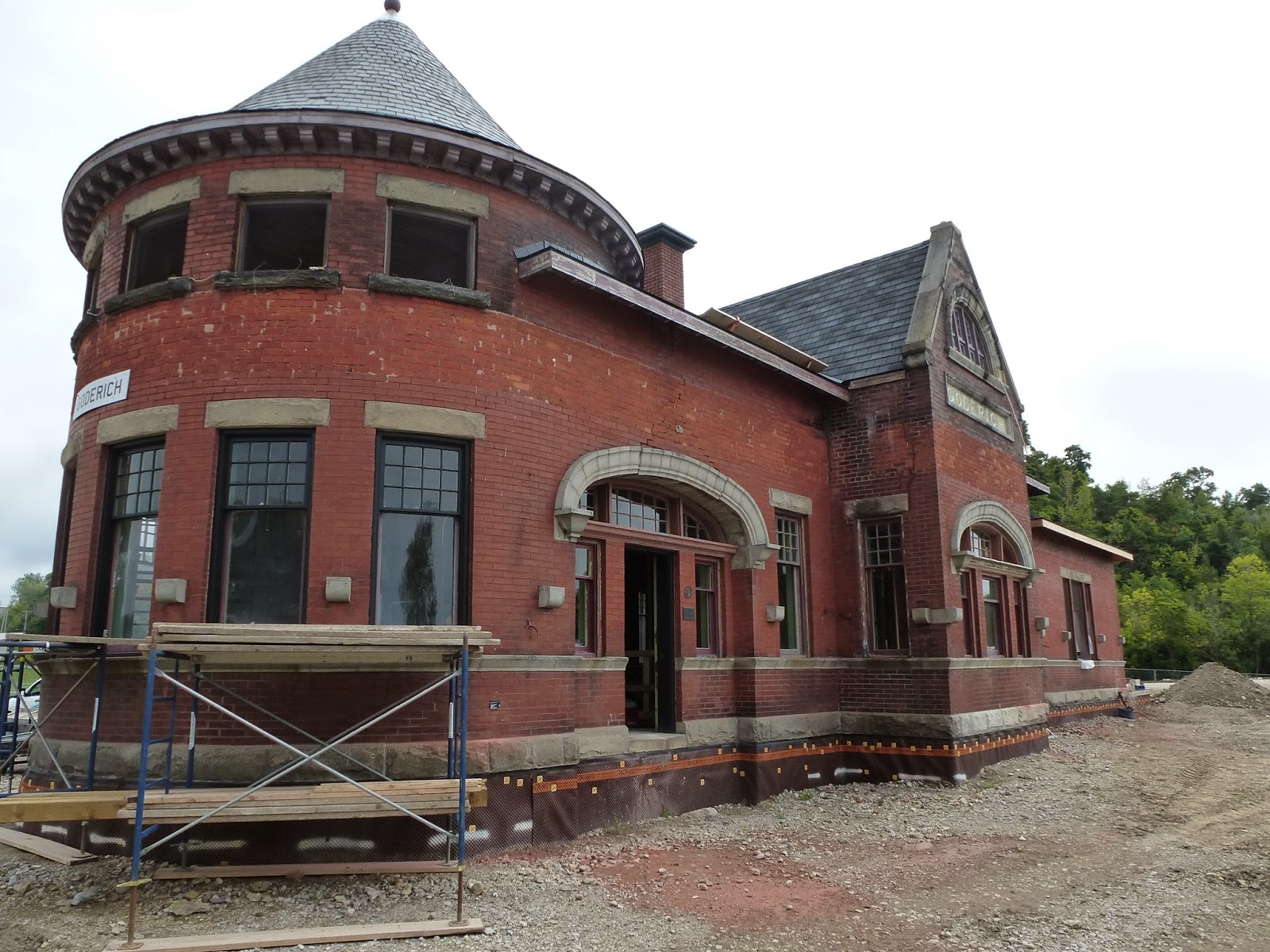 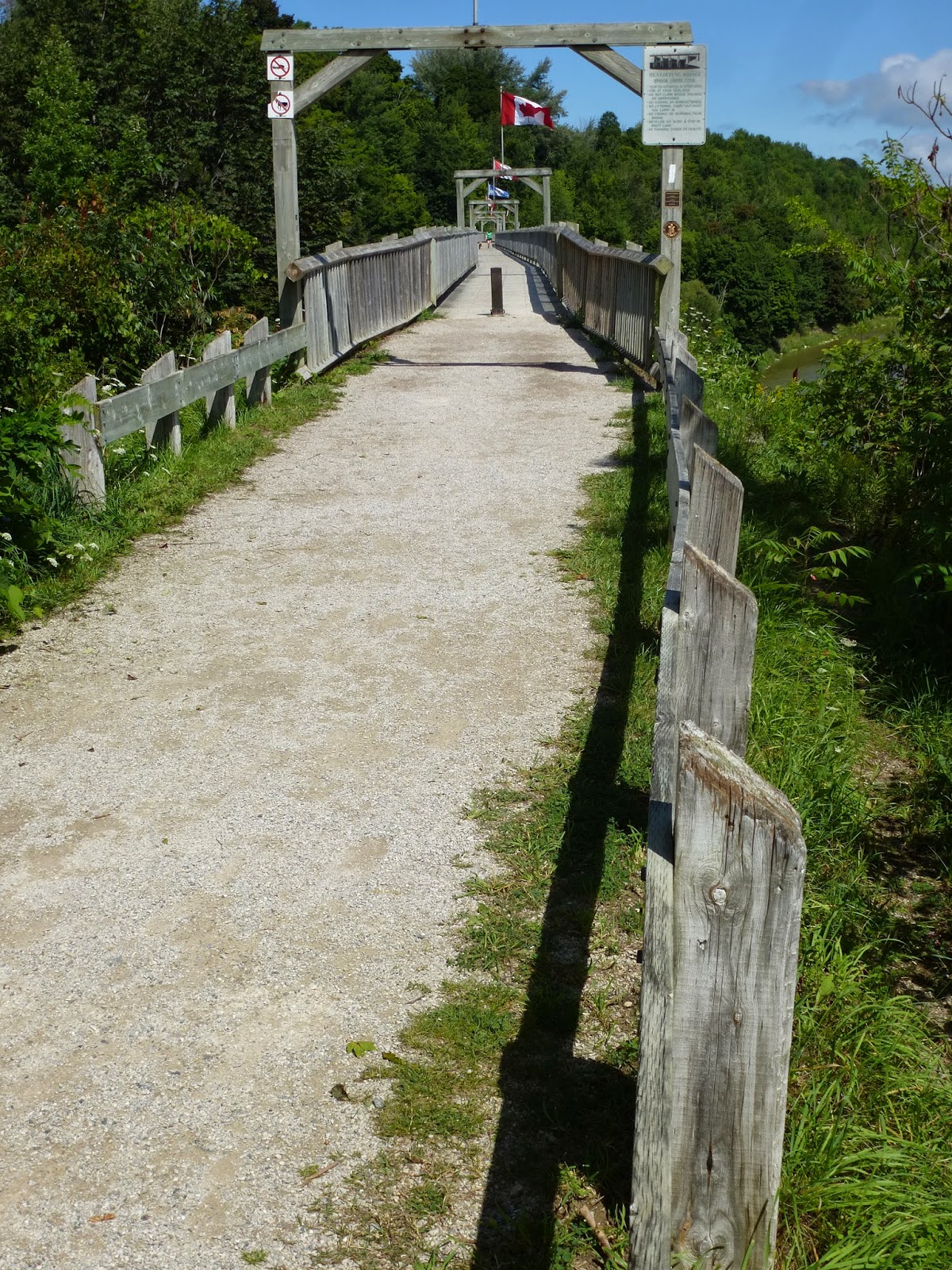 One of my other items on the railway to-do list was to visit the Tiger Dunlop Walking Trail on the northern edge of the town. The reason I wanted to check it out was that this trail crosses the Maitland River via the former Canadian Pacific Railway Trestle.

The bridge is an impressive structure, which was built in 1906 for the railway's approach to Goderich harbour. When the original wooden bridge was built, it was 212 metres long (695 feet), making it the longest railway trestle in Ontario. The bridge was not without its challenges, the chief among them the steep drop off between the rail line over the river and the rails at the harbour.

To solve this problem, the railway carted in tonnes of earth to create a gradual grade that would be able to accommodate the needs of steam locomotives approaching the rail line's terminus. It was interesting to walk this old right of way. I can say that, despite the efforts to limit the grade in and out of the low-lying harbour, this grade would likely still pose tough operational challenges for the CPR.

When the CPR discontinued service in Goderich, the fate of this old bridge was very much in doubt until a local preservation effort saved the structure for use as a walking trail. The bridge, now called the Menesetung Walking Bridge, gives you a great idea of what it was like to ride the rails in this area. It also offers great views of the city's harbour.

The shot below gives you an idea of the elevation. 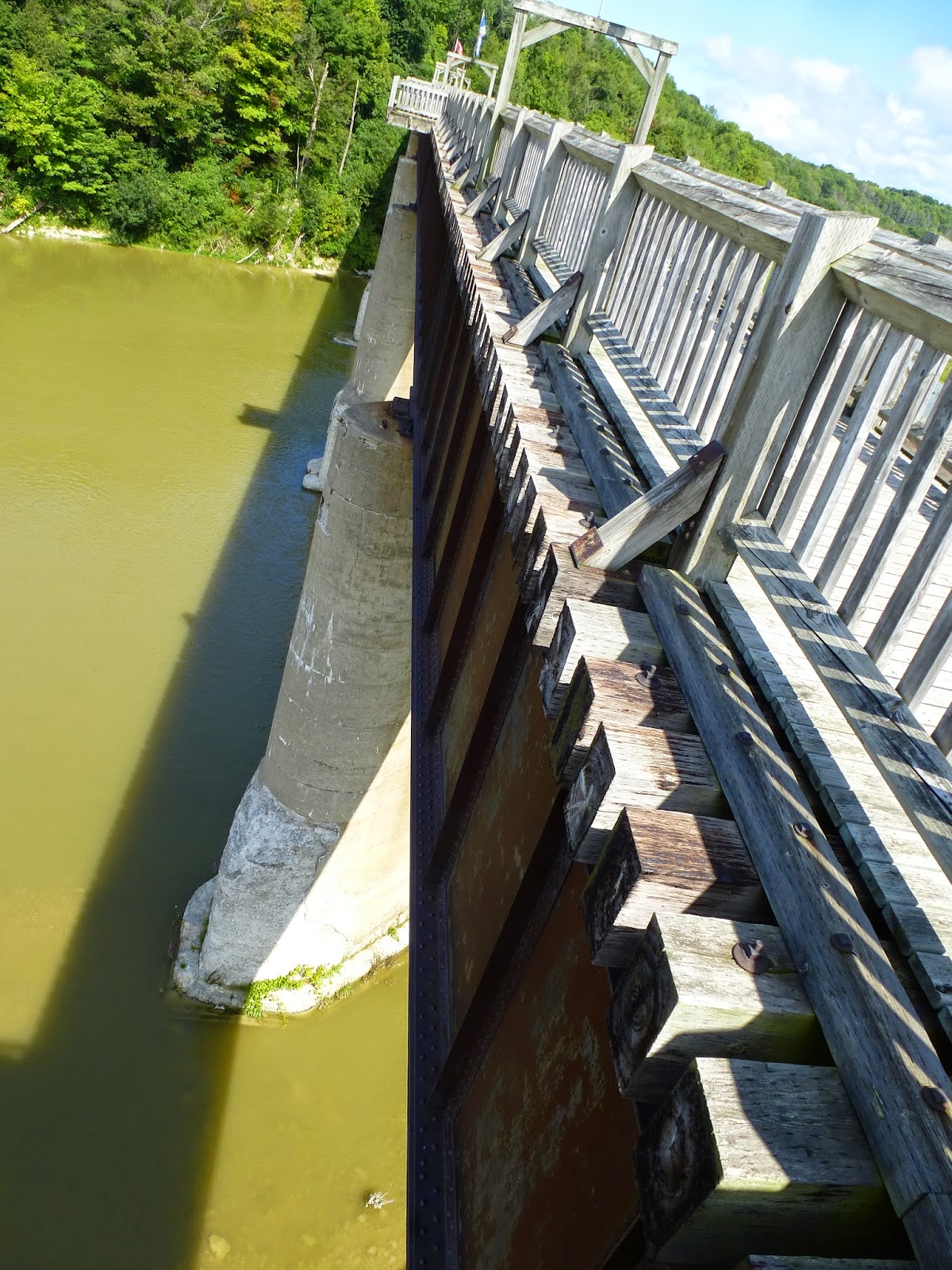 This is what engineers would have seen as they approached the town. Take a moment to consider the elevation and the short distance to the harbour. That's a steep slide down to sea level in a short period of time. It makes you appreciate the skill it takes to work on the railway. You can see the town's grain elevators and parts of the salt mine operations. Can you spot the hopper cars? 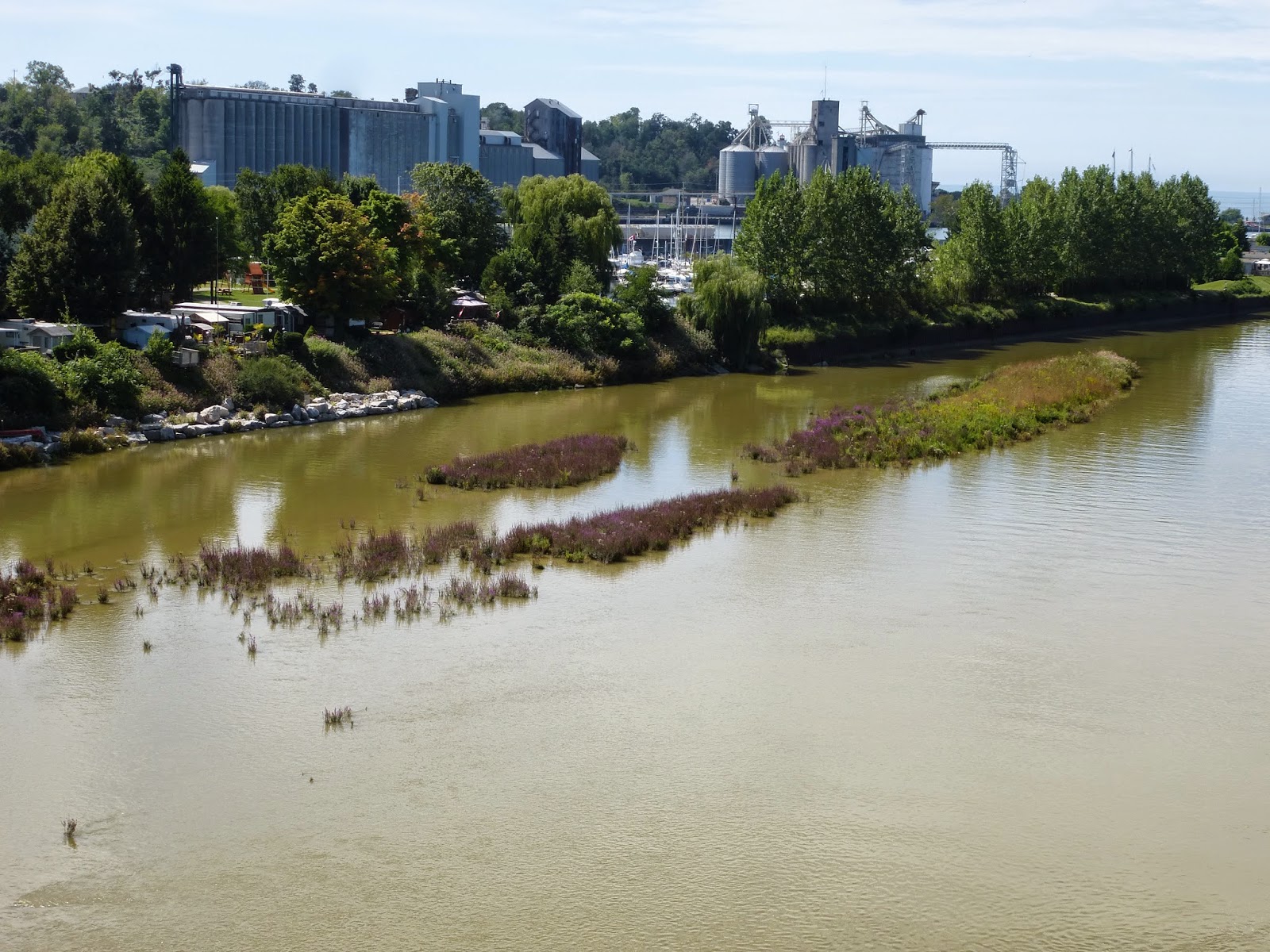 The final stop on our history tour was the Huron County Museum, perhaps the best local history museum you will find in Canada. I can't begin to describe how comprehensive this facility is in documenting the history of Huron County. The museum's sister site, the Huron County Gaol, built in 1830, is similarly fascinating and thorough.

The centrepiece of the museum is Canadian Pacific Vaughan class U3e steam locomotive 6275. Built in 1913 at CPR's Angus shops in Montreal, this 0-6-0 locomotive was used as a local switcher in Goderich for years until the diesel era made it obsolete. The shot below is the cab. This gives you an idea of how complex these machines are. It gives me an immense amount of appreciation for my grandfathers, who both worked on the CPR when these brutes plied the rails. 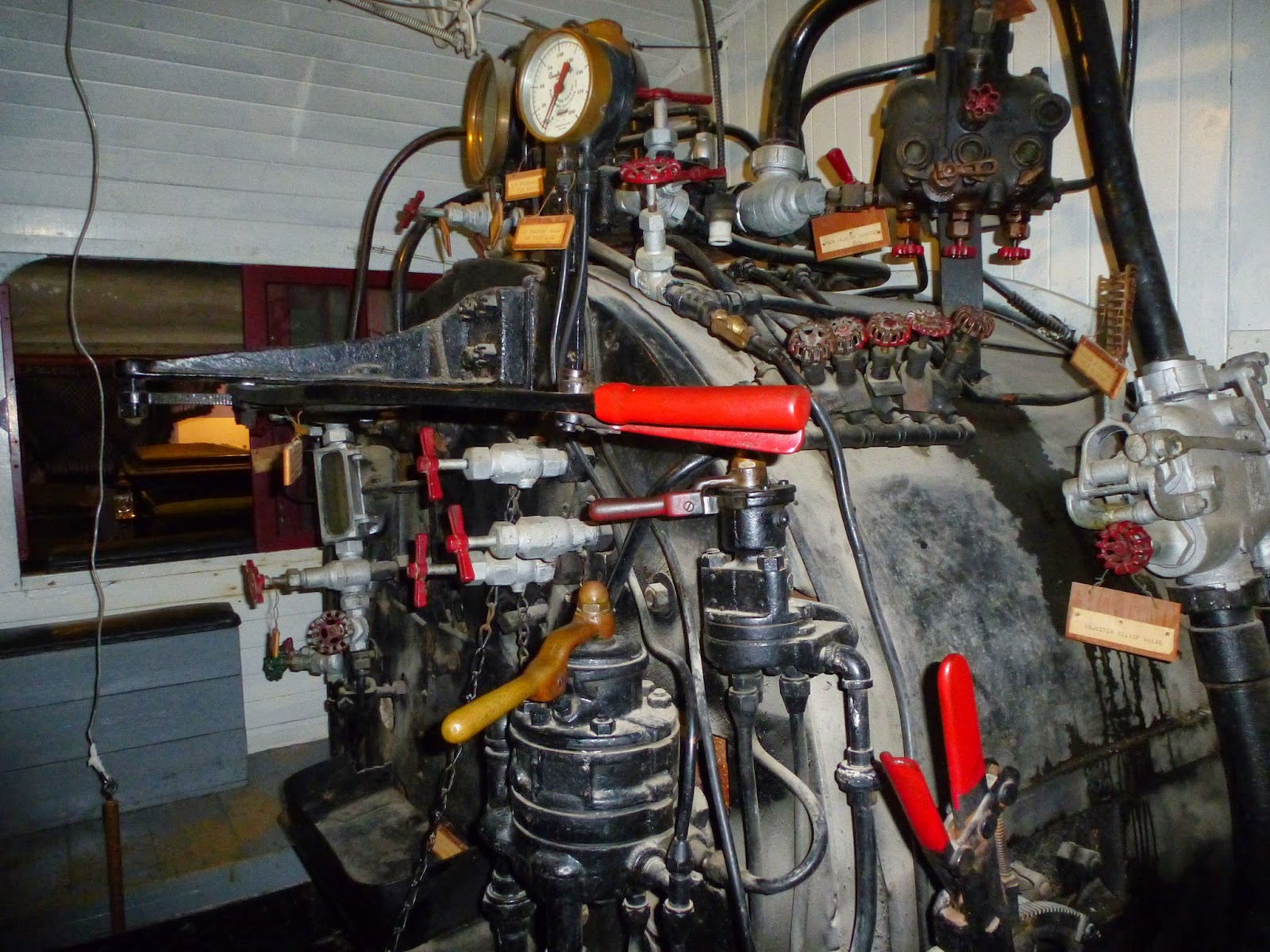 This locomotive's history follows a familiar story. It was in danger of being scrapped when a local effort to save it managed to come up with a deal with the railway in 1958. In the end, the engine was sold for the price of scrap. It was sold for the going rate: $1 for every 5 pounds. How times have changed.

The Huron County Museum was build around this locomotive. To get this engine to the museum's site, it had to be guided down two 60-foot lengths of rail along the town's streets in order to reach its place of honour. No small feat.

This shot below is one of the few shots I took that turned out okay. The museum's lighting was unfortunately not conducive to great photography, particularly the camera I was using that day. Here's a profile shot below. The locomotive is not resting on rails, but on an angled concrete floor, which looked like the inside of a boat. I imagine this keeps the engine in place. The steam engine is surrounded by benching, very much like the ones you would expect to find in a train station in the 1950s or earlier. 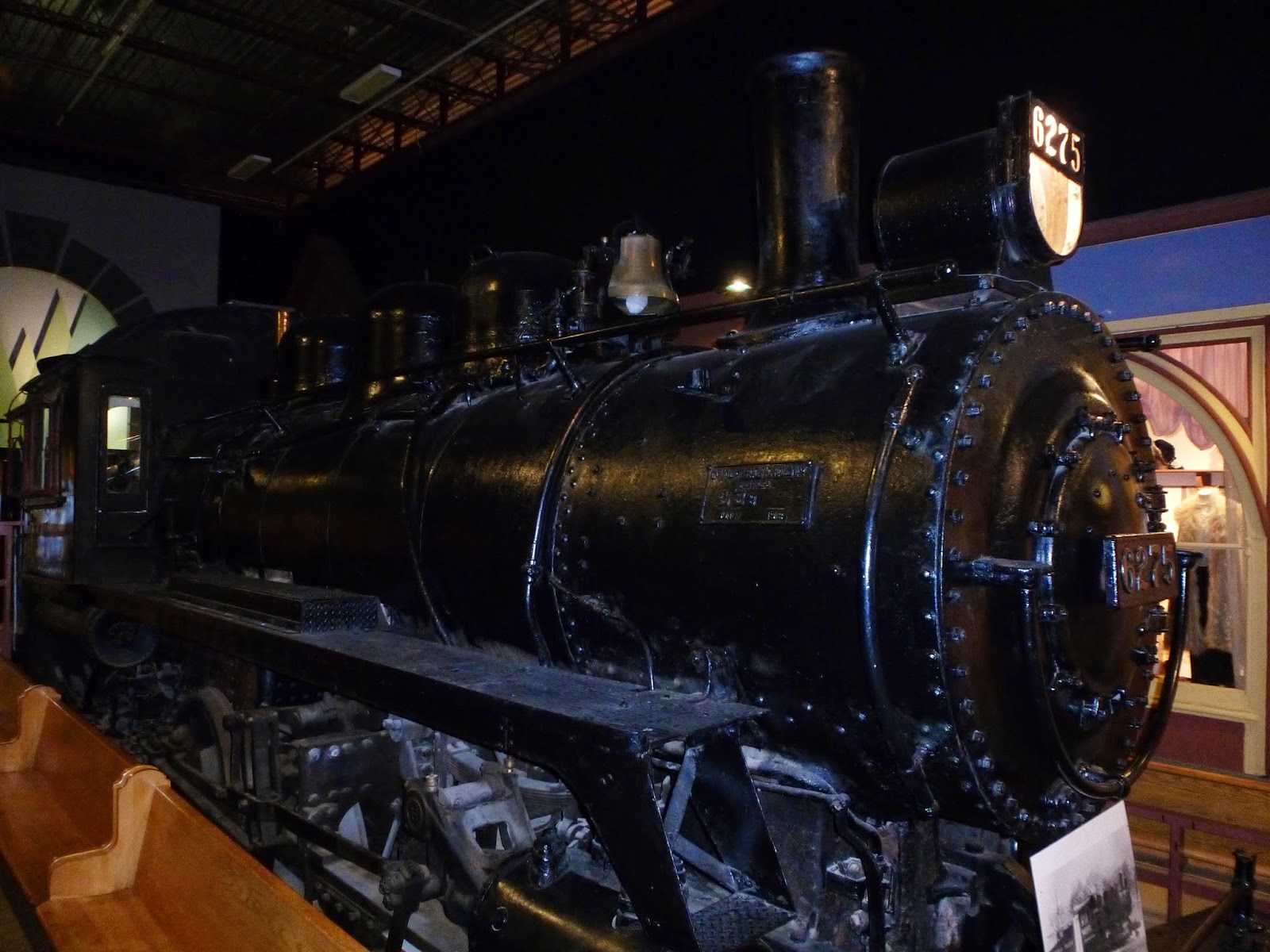 The museum even has a CPR baggage cart with some old luggage packed onto it. Nice touch! 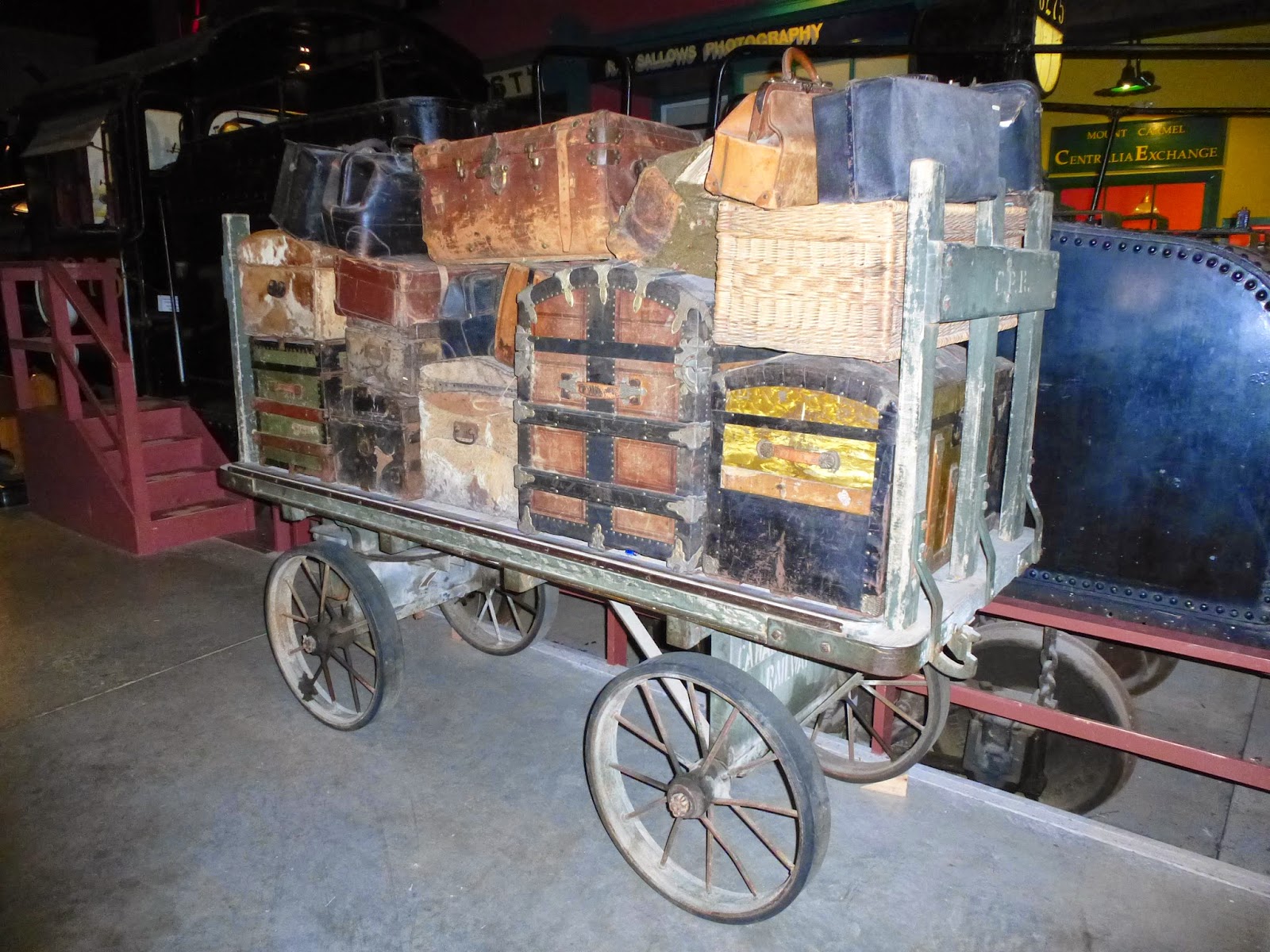 In many ways, I think Goderich is a town that punches above its weight. Its preservation of its past has served the town well. And its current rail operations are a bonus.﻿
Posted by Michael at Thursday, May 14, 2015