The other side: Port Huron, Michigan

Port Huron, Michigan is a transportation hub at the southern tip of Lake Huron, across the St. Clair River from Sarnia, Ontario. Like Sarnia, Port Huron is a great place to watch Great Lakes freighters ply the waters of Lake Huron. For our purposes here, it's also located at a critical point in the Canadian National Railways system. The Paul M. Tellier tunnel beneath the St. Clair River allows CN to quickly transport a number of goods between Toronto and Chicago with minimal delay.

Without getting into the history here, I will simply say that the tunnel is a favourite spot for railfanning in Port Huron and Sarnia, although I have to say that I have yet to photograph a train actually going into the tunnel or heading out of the tunnel in my visits to the area. I was talking about this with my brother a while back. Then, a few days later, he was on his way back from the Detroit Airport when he made a small detour to see if there was anything to shoot on the Port Huron side of the tunnel.

His email to me read, "Ask and ye shall receive." Here are some shots he took of an eastbound CN container train headed for the tunnel and Canada.

The Port Huron side of the tunnel is nowhere near as dramatic as the Canadian side, but my brother did manage to capture a few rail bumpers and the Port Huron water tower in this shot. As a comparison, here's a shot I took last December of the Canadian side. You can see the old tunnel beside the new one, which opened for business in 1994. You can also see a CN police cruiser parked on the old right-of-way, which is now an access road to the old tunnel. 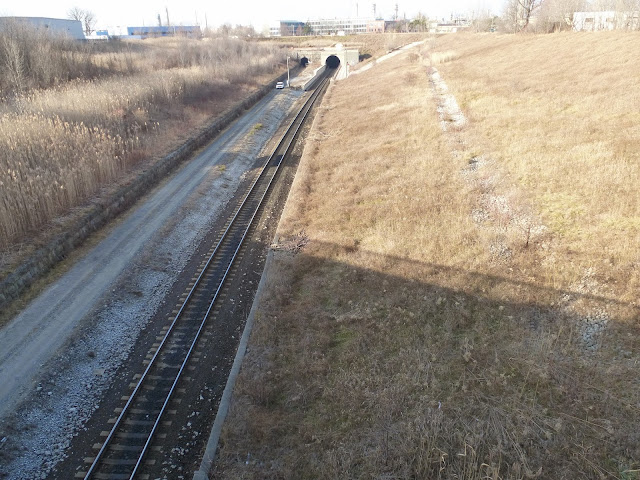 Back to Port Huron. My brother parked in the Amtrak station parking lot and tried to get some shots of the tunnel train going into the tunnel. As you can see (below), the station is not all that far from the tunnel (to the left of the Amtrak sign). 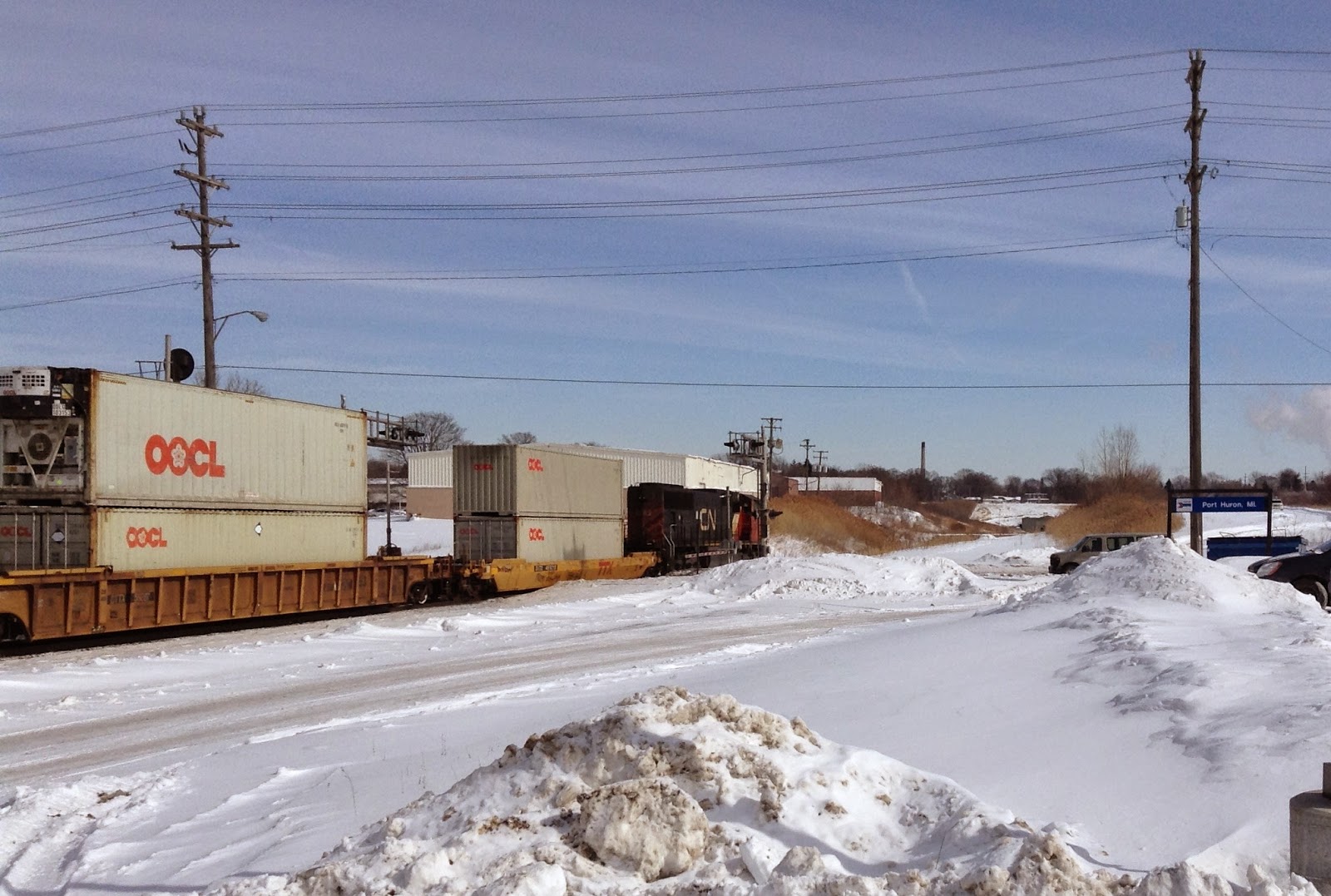 The Amtrak station is used as an endpoint for Amtrak trains to and from Chicago. This train is called the Bluewater. The station sees one arrival from Chicago daily and serves as the departure point for one other train, to Chicago, each day. At one point, Amtrak and Via Rail Canada jointly operated a train, the International Ltd., which connected Chicago and Toronto. That was the last passenger train to use the tunnel. Service was discontinued in 2004, due to declining ridership. Here's a shot of a Chicago-bound International Ltd. at Sarnia station in the early 1990s. 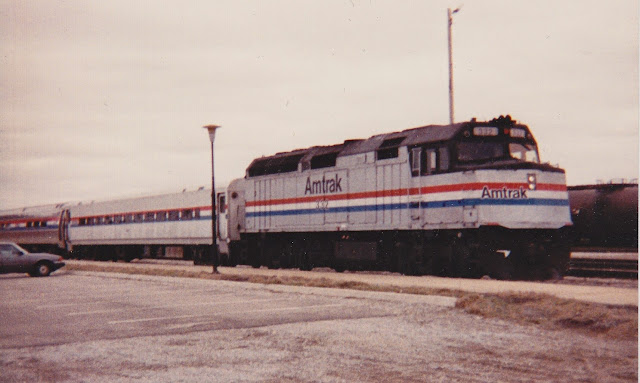 Here's a better shot of the container train descending into the tunnel. Some of the container cars only have one container. This was once a much more common site in Sarnia, since the old tunnel could not accommodate double stacks. 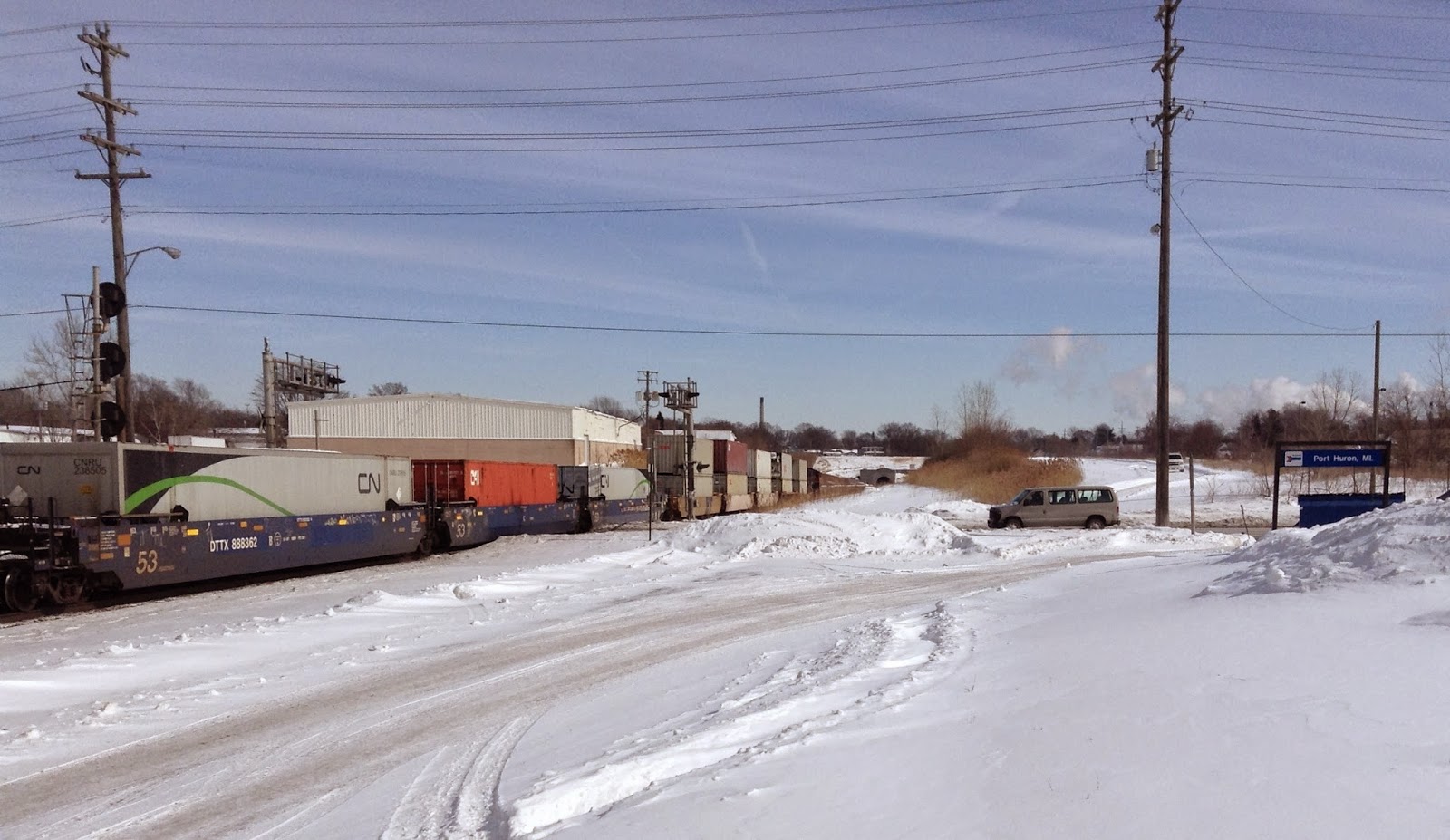 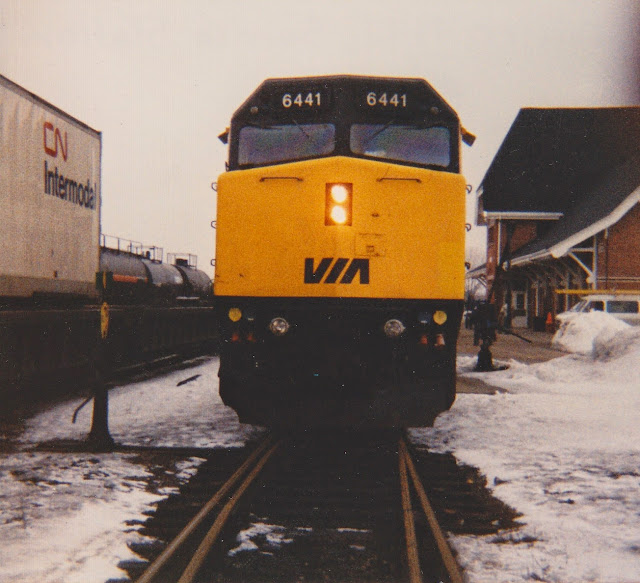 Here's the going away shot of the train, as a few cars wait at the 16th Street level crossing. 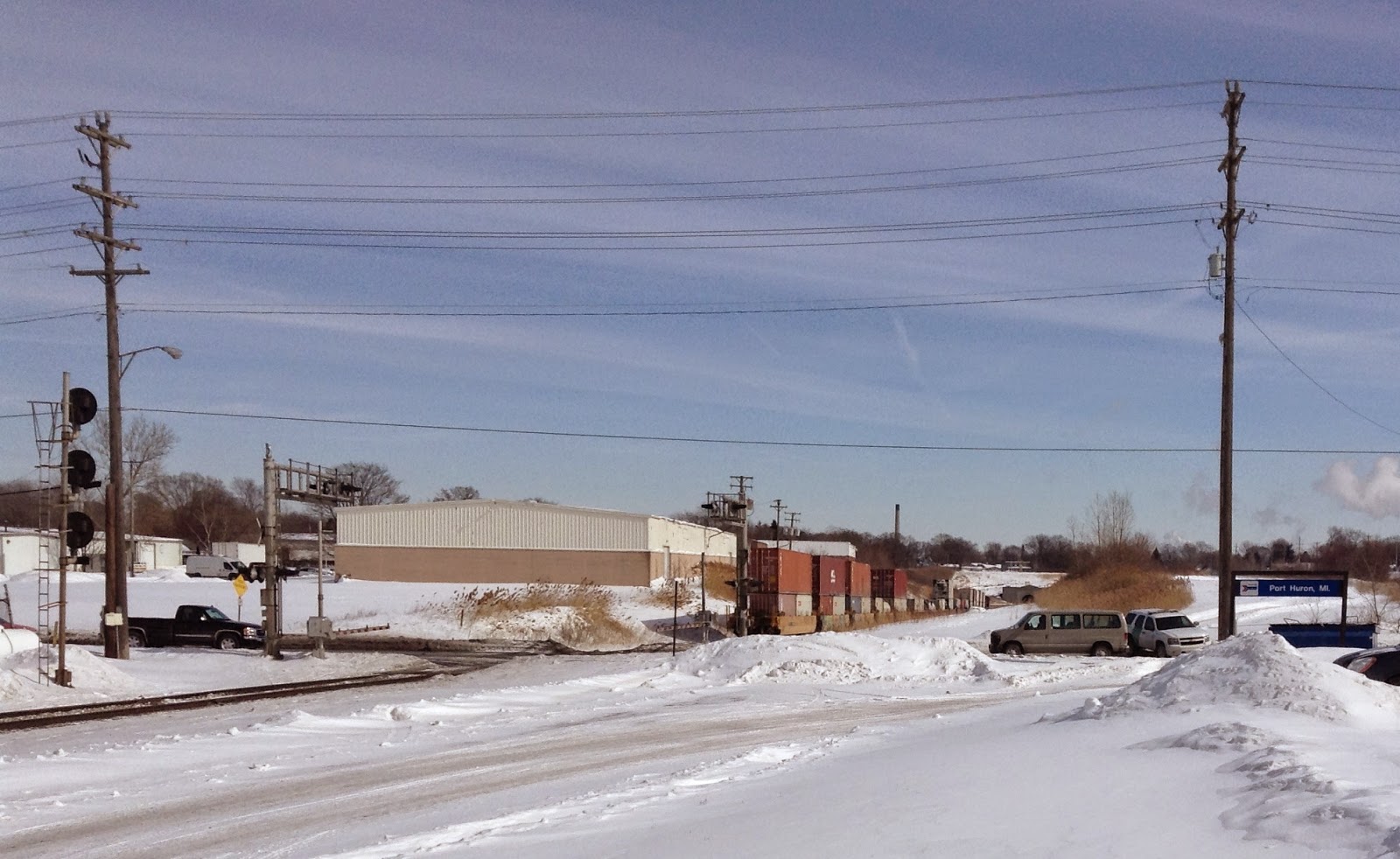 Speaking of the Amtrak station, here it is, in all its uninspired glory. You will also notice that the Port Huron side of the tunnel does not have the bustling rail yard like the Sarnia side. Still, I'd imagine this would be a good vista to capture trains. You can see a long way off in the distance from here. 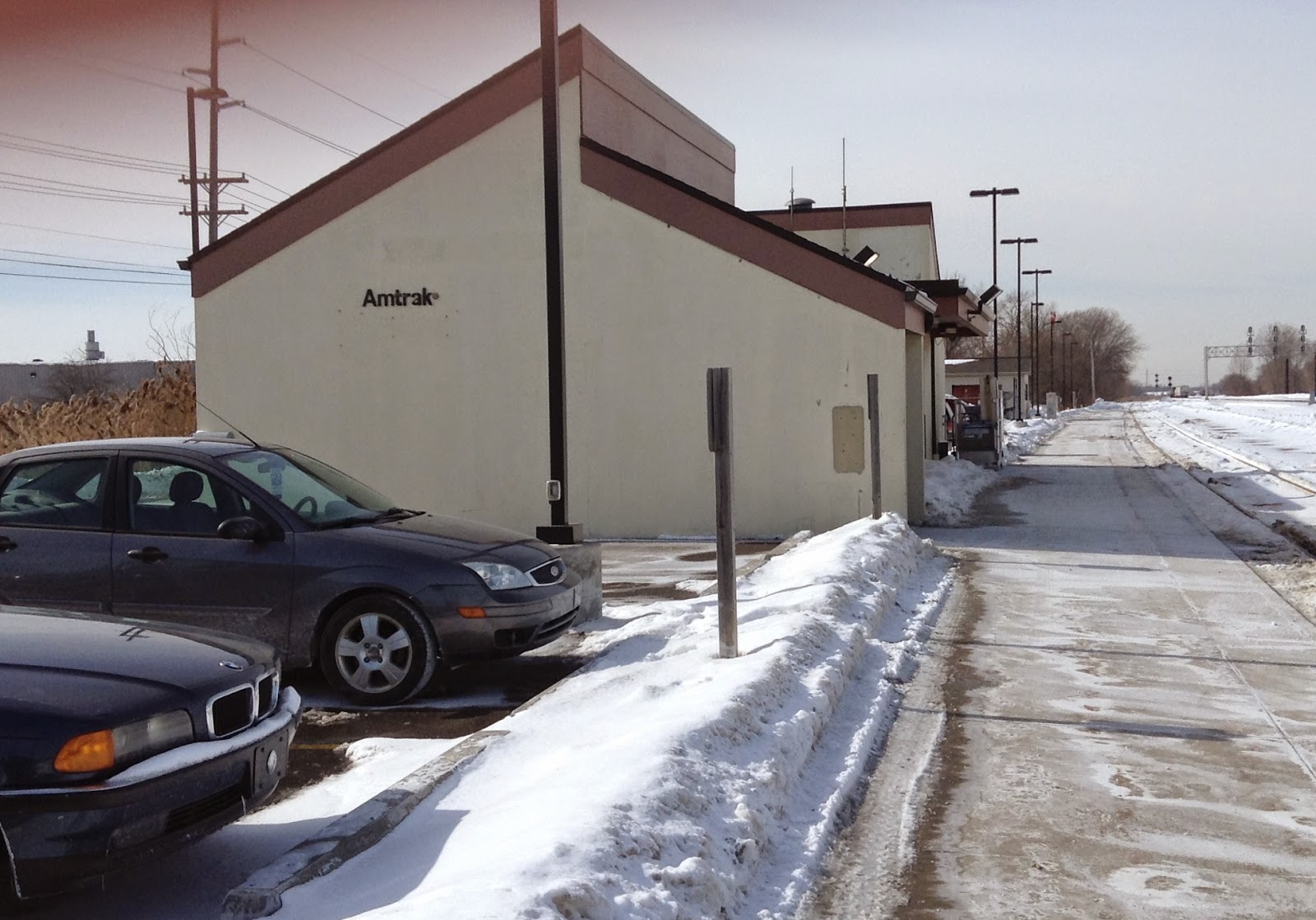 Special thanks to my brother for stopping off and capturing this train. I still have to cross a tunnel train off my to-do list, but I guess this will have to do for now. If you want to see my meet with a tunnel train as it left Sarnia yard, check out this post from January.
﻿
Posted by Michael at Thursday, May 21, 2015