It seems as though every time I blog about this little runt of a train, which travels once a week out to Arnprior via the Beachburg Sub and the Renfrew Spur, I get loads of responses. I have come to realize that a great number of my readers here in Ottawa watch out for this train every week, many of whom come away empty handed, due to its inconsistent appearances in Bells Corners, Kanata and other stops along the way to and from Arnprior. Well, I was surprised to receive a detailed message about this train in the comments section of my previous post about the Arnprior local. 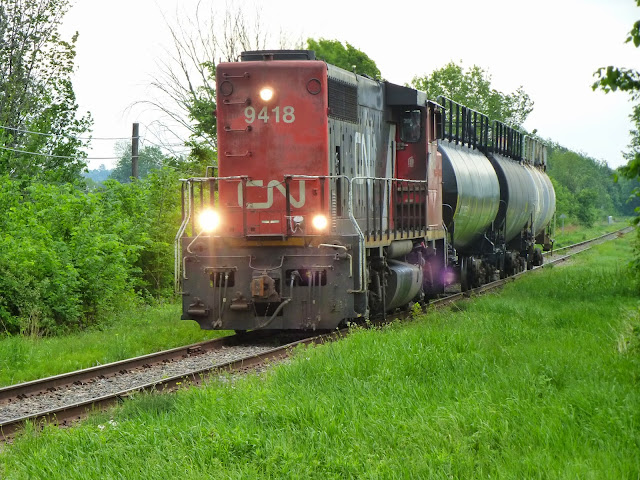 Before I get to the comment, I need to confirm that, yes, the above image is one of many I captured in my first proper meet with the Arnprior local. I caught up with the three-car consist recently at the Trans-Canada Trail level crossing near Corkstown Road and Highway 417. However, I will save this for a future post. For those interested in a good, safe spot to shoot this train, I highly recommend this spot.
So, back to my original point. All of our conversations about CN's Wednesday train out to Arnprior attracted the attention of Ian McCord, former car controller for the Ottawa Central Railway and Yardmaster for CN. Here is his comment in full, in case you missed it:
The product in the tank cars is Caprolactam. It takes hours/days to unload with the aid of steam as they are basically rolling popsicles.
Nylene has 2 tracks with 3 unloading stops on each. The train crew has special spotting instructions for each car so it could take some time to do all the moves.
In my time at the OCRR and CN, the plant has changed hands 3 times: BASF, then Honeywell Nylon and finally Nylene. The DBCX cars are owned by BASF and the product normally originates at a facility in Texas but some cars are loaded in Georgia. In the 2000s, the longest trains had 7 tank cars and at one time Honeywell would load one or 2 covered hoppers a week with leftover nylon which was shipped to another Honeywell plant in the US.
As for the train's departure time, it is affected by the amount of switching to be done at Walkley Yard as well as the tiny window of time between the O-Trains at the Walkley diamond. The old O-Train schedule had our times for a signal out of the yard at 08:57, 09:12, 09:27, 09:42 etc.
So, there you have it. This is the best information I have been able to get about this train. Special thanks to Ian for reaching out and sharing his information. I'm hoping this will give local watchers some better information to use when they are trying to capture some shots of this train, like I did recently. And for those interested, it crossed Corkstown Road around 9:05 a.m. when I caught it recently.
And for readers outside of Ottawa, who may be a little less interested in this chase saga, I hope you will enjoy my upcoming shots of this train, which I captured recently. I will try to keep that post more generally focused. Stay tuned.

I look forward to seeing your photos - love the teaser photo of the unit long hood forward!

This is the essence of railroading to me. Finding out what moves where, why and how. Train pictures are train pictures, but discovering, learning and sharing are very important parts of railfanning if we decide to take it to that next level.

Why the heck do railways do what they do? This is a great step down that path, Michael!
Eric

Thanks for the comments, Steve and Eric. Steve - I look forward to sharing my photos of this meet soon. It's been a long time coming for me and this train. Eric - I'm glad you like the technical details, but I will defer all credit to Ian McCord. Of course, I will take the credit for knowing it was good enough to share in a proper post. I hope to be able to get more information like this as readers continue to contribute.

Well said gents and thanks to Ian for all of that great info.
No luck for me lately despite the great weather we've been having.
As sad as it is to get excited about what passes for rail traffic in the area, frankly I think what makes this train so exciting is the hunt - comes once a week, you never know how big it is, its unpredictable and if you miss it, your out another week. Much different than being on a mainline where you could camp out another hour and see 3 more come by.

I am glad to help when I can and that you were able to get shots of the train Michael. I look forward to the next post.

Thanks again Ian. I'm looking forward to sharing my shots from my recent meet. AJ - I think you've hit on something. Since there is so little to see in Ottawa, I think we all appreciate this train that much more.

I'm excited to see the photos Michael! Have to agree with AJ there, the rarity and inconsistency of this train is what makes it so appealing. Thanks to Ian for sharing all that interesting and useful information.

hey Michael I've been reading your blog ever since i stumbled upon it looking up the status on the CN beach burg sub before they tore up more of it. its amazing in a city with so little rail fanning to do you still manage to see so much!

also im a member of the Bytown Railway Society and we restore and maintain some railway equipment in the shop behind the now closed Science and Tech museum. if your interested in checking us out we have working sessions on Wednesday mornings and saturday mornings and I'm sure you can someone to show you around

Thanks for your comments. I do sometimes wonder myself how I keep this blog going with what little there is in Ottawa. I'd love to see what BRS has out there at the Musuem. I've been meaning to blog about your group for some time. Please feel free to contact me directly. hammond.michael77 at gmail dot com.

Sometimes the train to Arnprior doesn't run regularly. For example, today (Monday, July 4, 2016) it is going to Arnprior. I saw it cross March Road.

I know i'm a little late to the party here but I've been trying to have the time to meet this train ever since I read the post "My first glimpse etc." It's been about six months, but tomorrow I think I might actually be able to catch it as it passes South of the Queensway Carleton Hospital. There's a good stretch of track near 45°19'54.9"N 75°48'17.8"W where I'll be. Think I might position myself on the East end of the bridge crossing over the 416.

I love this train! I have caught it many times and a lot of those times with the help of Ian. I haven't been out much lately but reading this blog has fired me up abit! Lately I have heard this train still returning Wednesday late afternoon as well as on Thursdays! I think I'll be heading out this Wednesday coming up and see how my luck goes! Check out my YouTube channel Burnuts007 just skip the snow removal videos and you'll find 589. Great blog ! See u out there

I just discovered this blog yesterday, and I am at once quite impressed with and grateful for all the work that goes into it. Interestingly, this story just passed through my social-media news feed...

The video will be similar to this one I made on the Beachburg sub!