So, where is Mandaumin anyway? Mandaumin is a tiny farming hamlet that straddles Mandaumin Road, the dividing line between Sarnia and its neighbouring township. It is a rural community of less than 100, just east of the city. It has a farmer's co-op, a few homes, a United church, an ancient barn and an abandoned (and supposedly haunted) farm house. For our purposes, it is also bisected by the east-west CN Strathroy Subdivision at milepost 50.9 (Sarnia Yard is at 57.2) Long freights eastbound for London or westbound for Sarnia's rail yard and the St. Clair Tunnel speed through this community regularly. 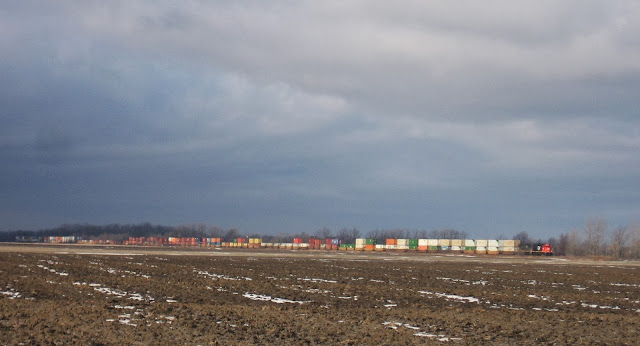 On Dec. 23, I was on my way into Sarnia when I saw this intermodal train (above) making its way east. The first thing worth mentioning is this area's resemblance to the prairies. Sarnia and Lambton County is an area of fertile farm land, which is as flat as the prairies, albeit with more trees. The ice storm that blasted Toronto on the 23rd brought rain to the Sarnia area, which produced the above shot of this train making its way next to a fallow corn field, dotted with snow.

By way of contrast, this shot below is Mandaumin in the summer months, with the corn stalks at their peak. 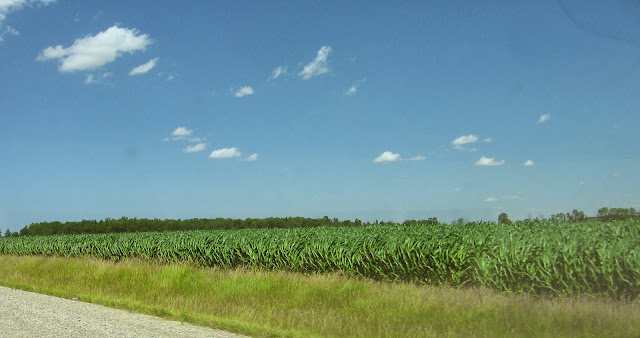 As I drove down the road, I pulled over a few times to take a few shots of CN 5451 (SD60) and Illinois Central 1038 (SD70) hustling with a full train bound for London. You can make out the barns on the other side of the main line. I was really pleased with this shot and the one at the top of this post, since the terrain allowed me to get full shots of the train. 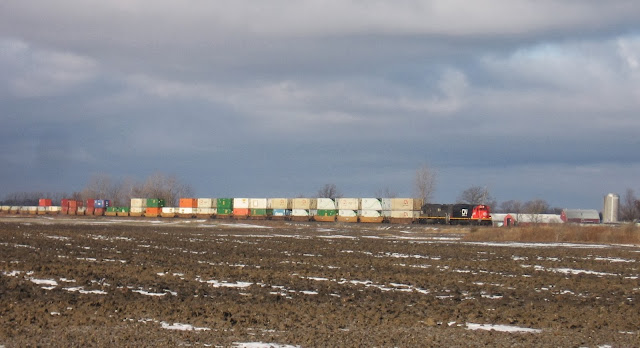 I was even luckier as the train made its way to the crossing (shot below). The sun managed to peak through the clouds to provide the perfect lighting for the train as it passed the railway's Mandaumin sign. You can see a small piece of the farmer's co-op to the right. I was pleased with the lighting and the clouds, which all contributed to some of the best rail photos I have taken. I have a few more from this meet that I will share later. 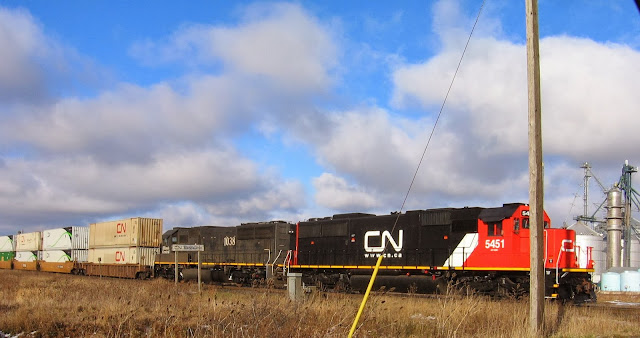 I made sure I was first in line at the crossing as the train sped by. You can see that the sun was in the perfect spot for photos. Due to the speed of the trains, this crossing has had crossing guards for a long time. 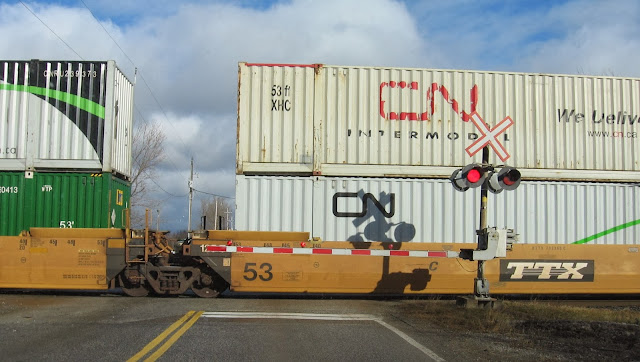 Almost as if on cue, the sun began to retreat behind the clouds as the end of the train came into view. I snapped a few shots of the end of the train through my car's open window before making my way into Sarnia where I spent an enjoyable morning getting some great shots at the end of the CSX Sarnia Subdivision, on the Point Edward spur and around Sarnia Yard. 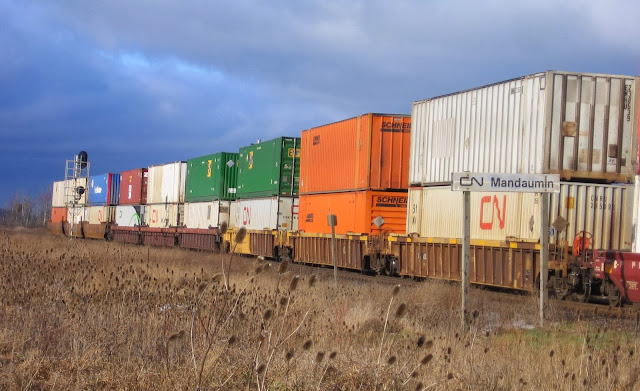 I was maudlin as I mulled musingly that I hadn't heard of Mandaumin, Michael. Muddling up Moose Jaw, Moosomin and Mantario, maybe. I thought of taking up the mandolin.

Seriously, thanks for posting this, especially highlighting the flatness of the land there. One thing I enjoy about the Prairies is the flatness - photograph an entire train at once:

They say that it's so flat in Saskatchewan - to see the whole province, stand on a chair :)

Thanks for starting 2014 off with a brightly-lit railfan hit!
Eric

Steve-- Yeah, I was disappointed that the hydro pole was in the way of my perfect shot, but I added the photo into the mix anyway. Eric -- you are right about the prairies. My favourite joke about the prairies was from Corner Gas when Hank dismissed a Dog River visitor's comment about Saskatchewan being flat. "It's not flat. There's just nothing to get in the way of the view." Mandaumin is kind of like that.

It's so flat, you can watch your dog run away from home for a week!

It's so flat, you can see next month on the horizon!
Eric