It's at least -30C with the wind chill and I'm standing on a wind-blown stretch of overpass waiting for a train. I must be nuts.

The Beachburg Sub has been neglecting the railways in its own backyard lately so I set out this week to take some winter railroading photos in Ottawa, even if it meant risking my limbs to frostbite. With that, let us enjoy Ottawa's winter wrath and beauty along the rails.

I paid a visit to Ottawa's Central Station to catch some arrivals. I walked over to the Belfast Road overpass, just east of the station, since I wanted to catch Via Train 33 arriving from Montreal on the Alexandria Subdivision. When I arrived on the overpass, I was dismayed to see the east sidewalk covered in snow, which forced me to shoot Train 33 from the west sidewalk. I was lucky that traffic was sparse and no trucks blocked my vantage point. The train, pulled by P42DC 907 had six renaissance cars in tow as it approached the overpass. The wind had begun to pick up at this point, but the sky was relatively clear. 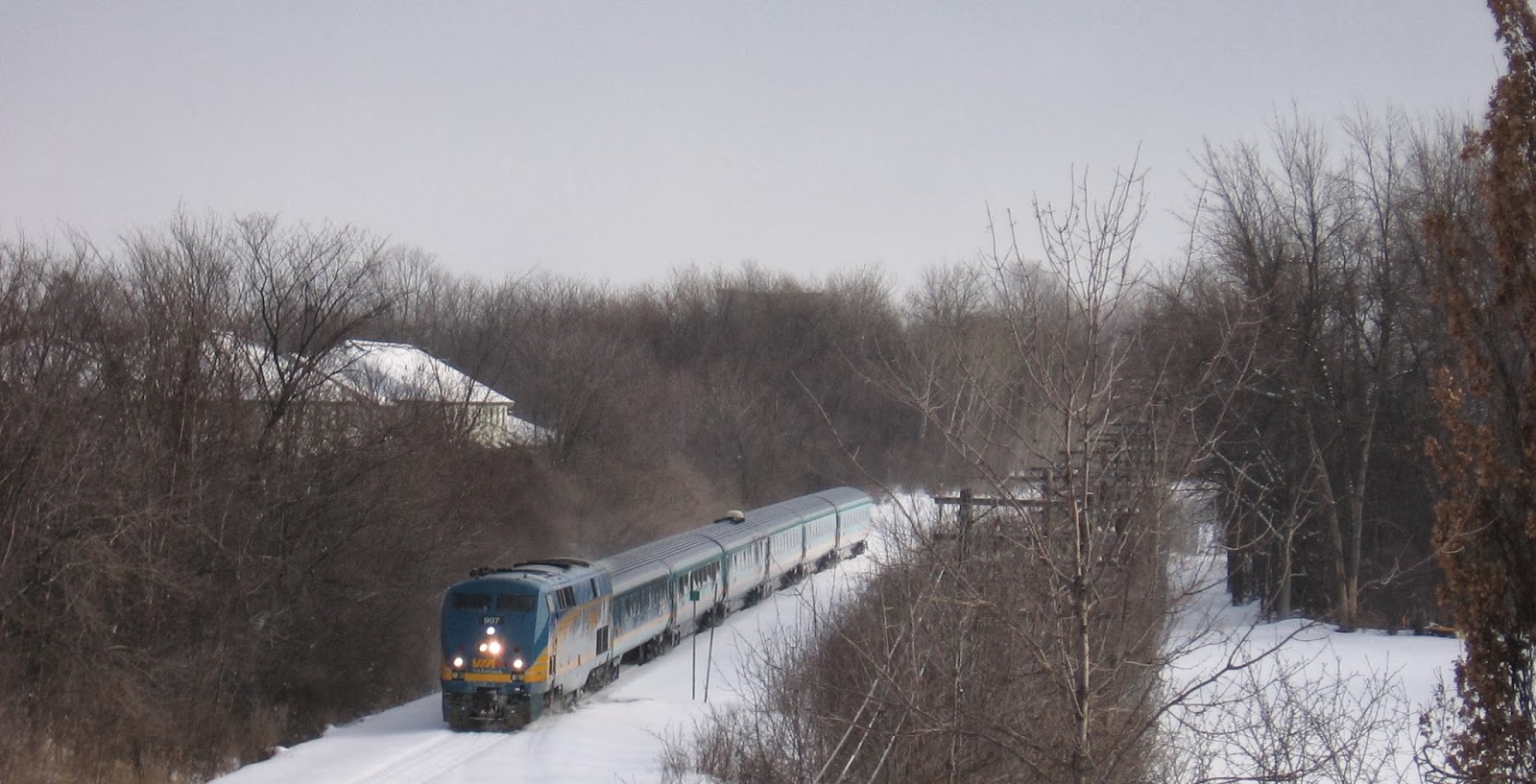 After capturing a few postcard images, I made sure to turn around, face west and get an overhead shot as Train 33  passed under Belfast Road and into the station. 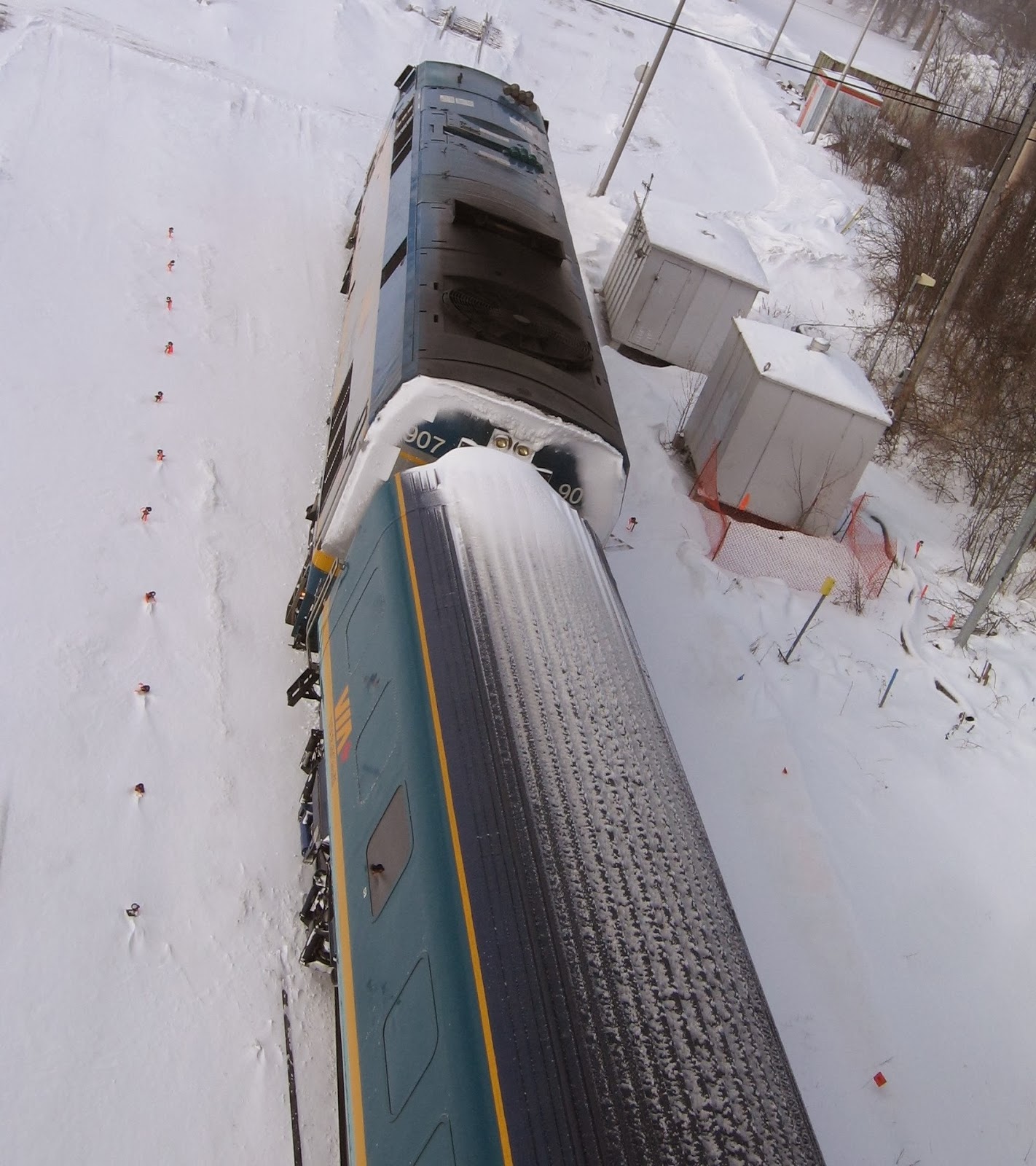 You can see how much the wind had been whipping up against Train 33 on the way to Ottawa, judging by the roof of the first class coach and the rear of P42 907. I like this spot for taking photos, but it is rather restrictive facing west since so many hydro wires obscure the view of the station. Note how the tracks are all but hidden by blowing snow except for the section with the switch heater, directly ahead of the train.

After Train 33 arrived, the wind picked up quite a bit, which actually made me happy since I have so few true winter railway shots in my collection. I made it to the station in time to wait for Train 50 from Toronto, which usually arrives about 20 minutes after Train 33. While I was waiting, I saw an interesting consist on the far track. Several generations of Via in one train! P42 918 idled away with a consist of LRC coaches in tow, with the exception of streamliner 4002, which was the designated Business Class (Via 1) coach for the day.

Now, check out the same consist after the wind picked up (below). It appears as though Ottawa is in the midst of a blizzard, but by this point, it was far too cold for snowfall. However, given the overnight snow that had blanketed the city, there was more than enough of the white stuff to blow around, creating the illusion of a blizzard. 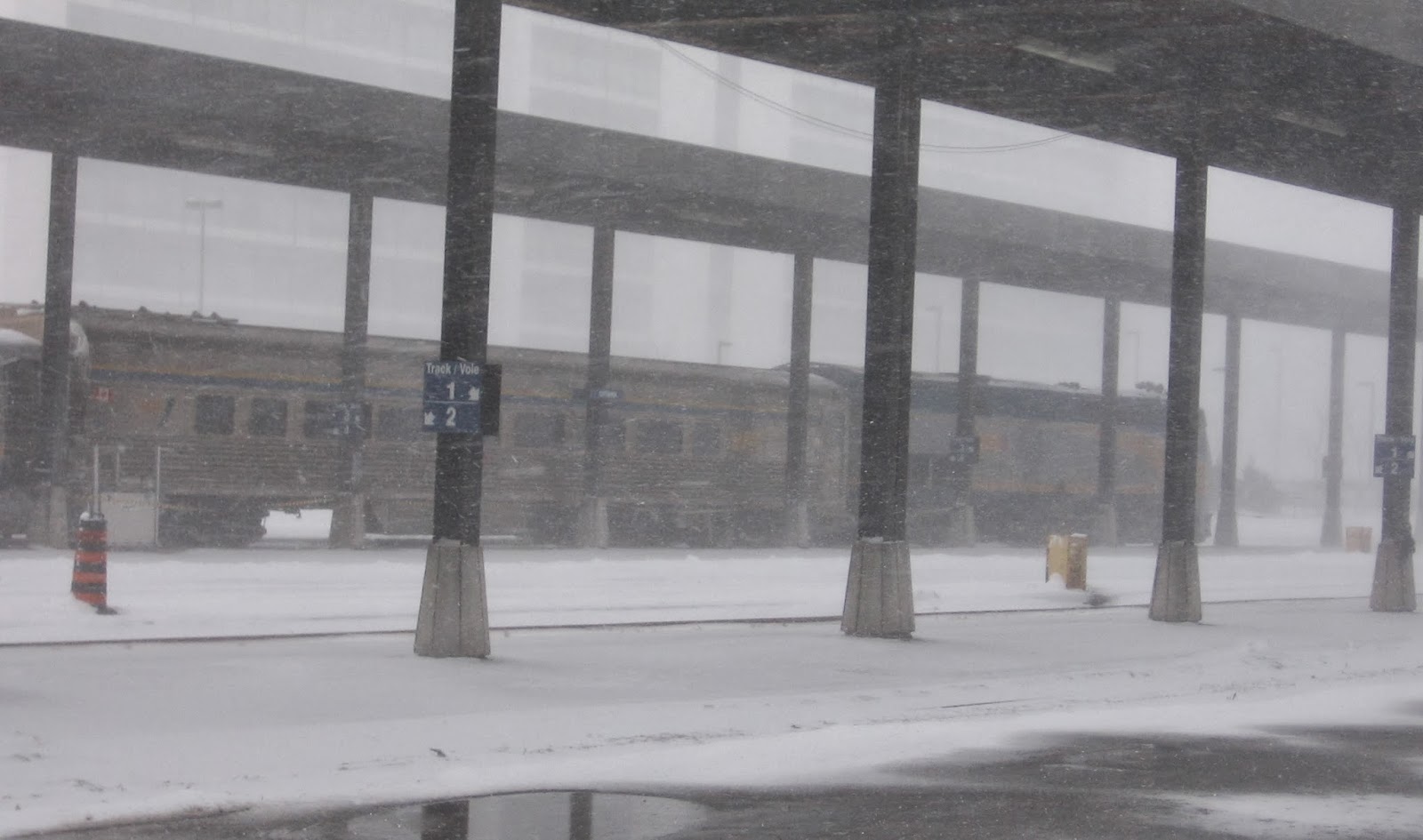 This happened in the span of about 10 minutes. I tried to stay warm as Train 50 approached. Usually, one can see eastbound trains coming into the station fairly easily from the platform. Unfortunately, I could not see Train 50 approaching, since the wind had created whiteout conditions. But, my keen hearing picked up the sound of a bell, so I fixed my camera west into the white abyss. 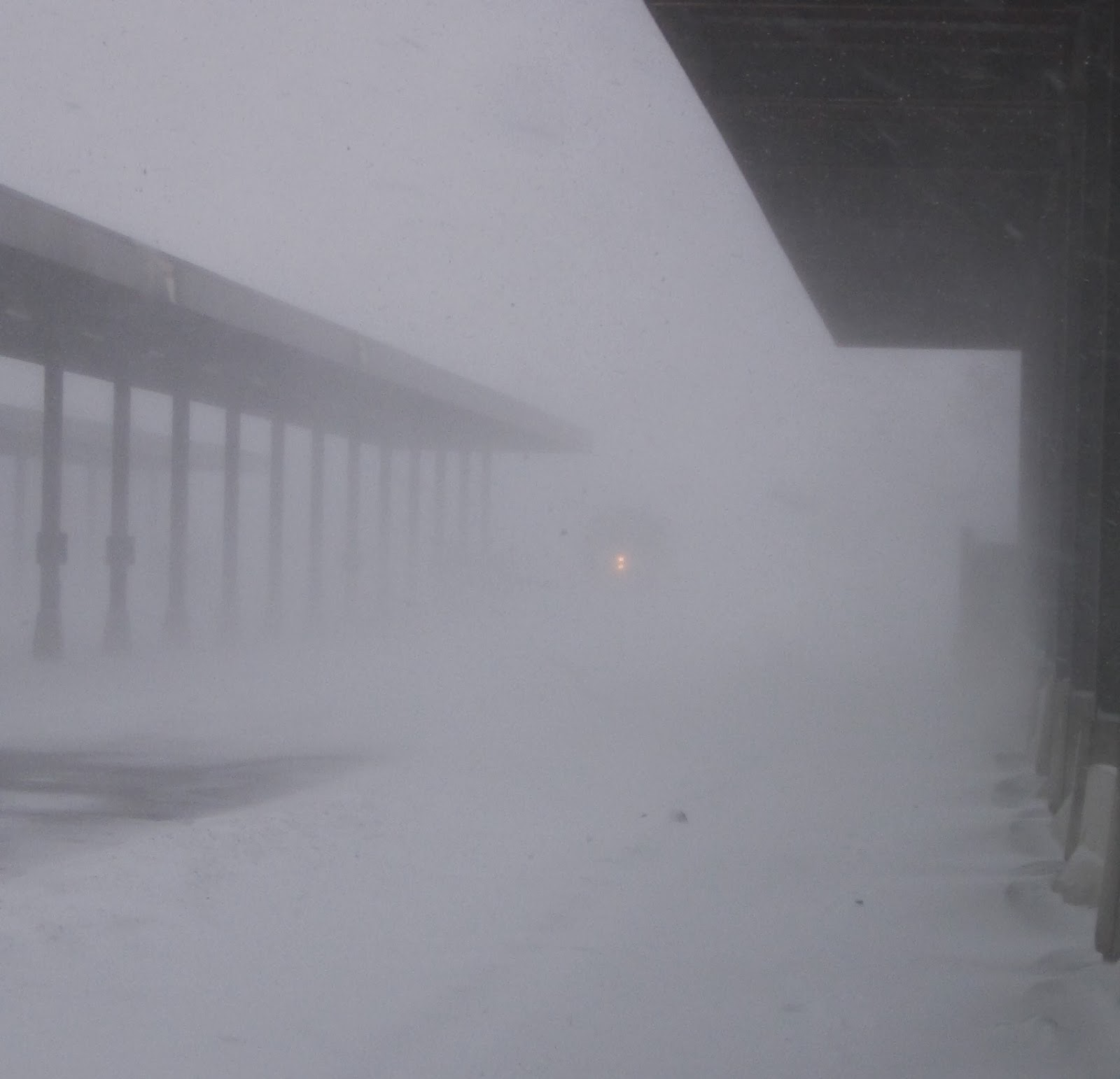 At this point, my fingers were frozen, so I tried to snap a few more images before I called it a day. Here's a closer shot below of Train 50, with F40PH-2 6457 and a string of three LRC coaches. Of course, I couldn't confirm the consist until the train actually emerged from the white wall of flying snow. 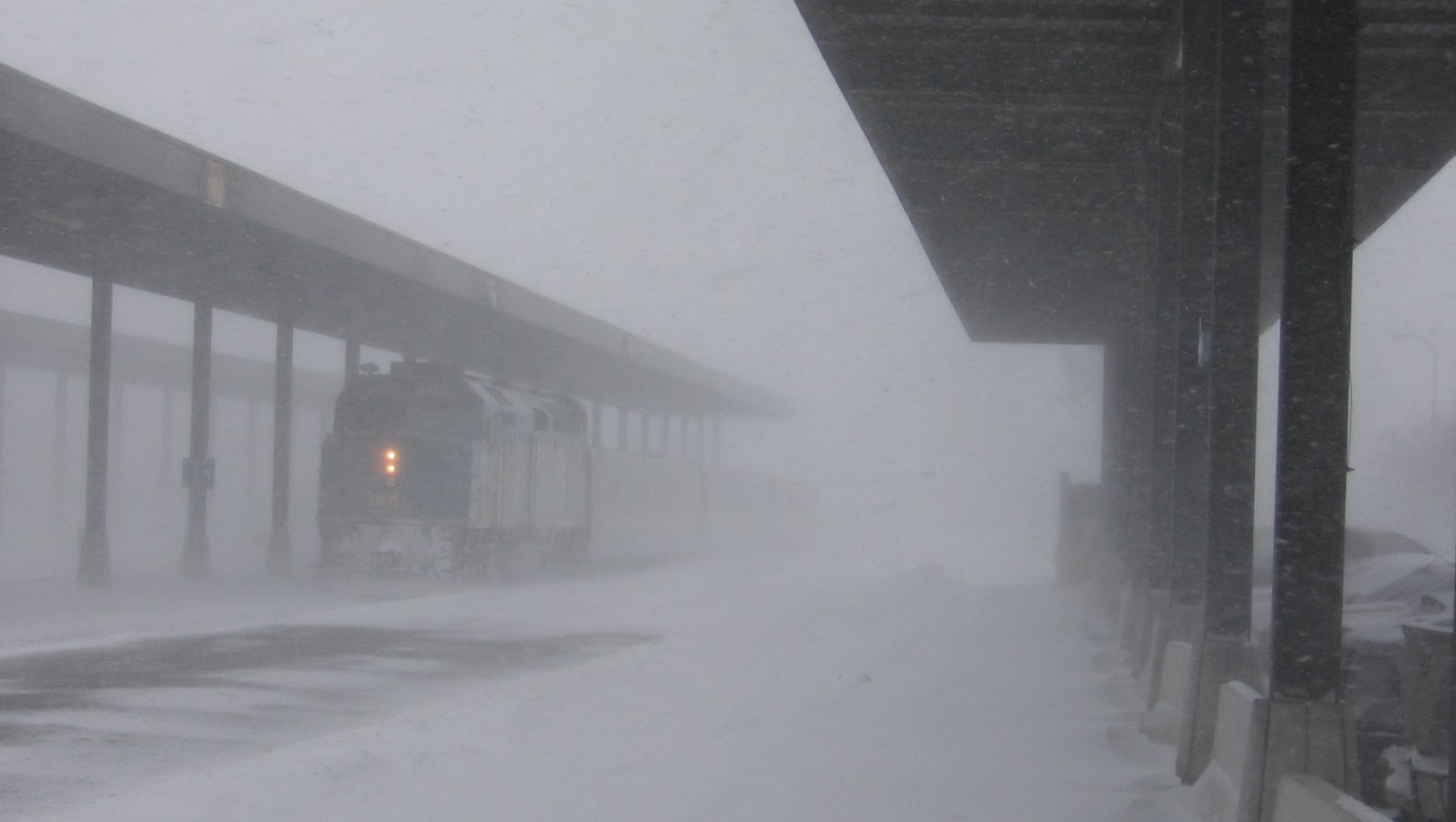 And with this shot below, it was time for me to head back indoors and let my hands thaw. 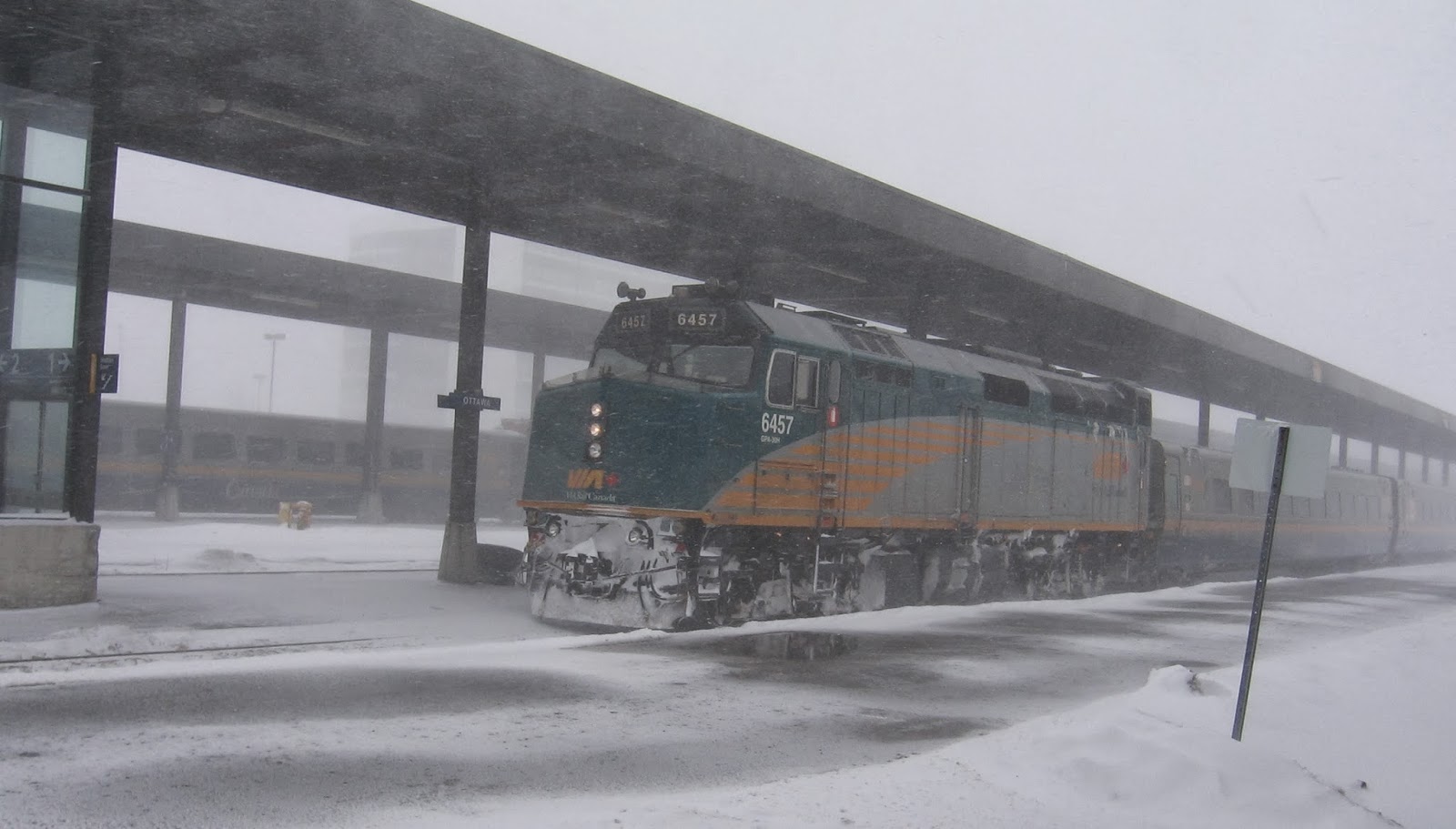 I am by no means done with this subject of winter railroading in Ottawa. My new goal is to shoot some freight trains that use the trackage near my house in Bells Corners, in the west end of Ottawa. There are several amazing vantage points for photographs, but the line is only used twice a week, so it will be incredibly tough to get the shots I want. But I shall persevere! Thanks to several Beachburg Sub readers who gave me a summary of Ottawa's local CN freight assignments.

Beachburg Subdivision Update: I've been meaning to blog about the remnants of this subdivision recently. The news regarding the fate of this sub is not encouraging. In December, the Pontiac region in Quebec lost a provincial court battle to maintain the remnants of the CN rail line that still lies within its jurisdiction. Essentially, the region is arguing that, according to a bylaw it passed, the rail corridor has been designated for rail use only, making any attempt to pull up the rails illegal. That argument was struck down in court. The municipality has vowed to fight on, but it seems that the remainder of this rail line will likely be torn up in the spring, as CN seems anxious to tear up the rail line all the way to Nepean junction, where Beachburg branches off from the Renfrew spur (formerly CN's Renfrew subdivision). You can read about the latest developments in the Pembroke Daily Observer here.

I hear that Renaissance cars are soon going to leave the Corridor, perhaps for mothballing, Michael.

Any railfanning I've done under similar conditions was short-lived and not all that pleasant, but well-remembered after warming up!

Your initial comment about being nuts made me chuckle and remember a New Year's Eve afternoon I spent standing in a snow-covered field in Fort Rouge in Winnipeg at -30C (air temperature). I was watching a GMD1 switch the yard and thinking, this is good but is this really worth it?

Yes it is, Steve, as long as you didn't lose any fingers or toes to frostbite :)
Eric

Thanks for the comments, gents. These photos were no doubt inspired by the winter shots I have admired on Trackside Treasure and the Traingeek blogs. Steve, I figured you could relate since you are in Winterpeg. I agree with Eric, the results are worth the frostbite, especially for a GMD1.