Fall arrived in Ottawa in a hurry this year. Among with the changing colour of the leaves, it's easy to spot autumn in Ottawa by the changing consists at the central Via station. The most obvious change I spotted last week was the length of the trains. Throughout the summer, many of the trains were about three cars long and most were LRC consists. I even spotted one two-car consist. Last week, I saw some longer trains and was happy to see the return of the streamliners, albeit in an odd spot. 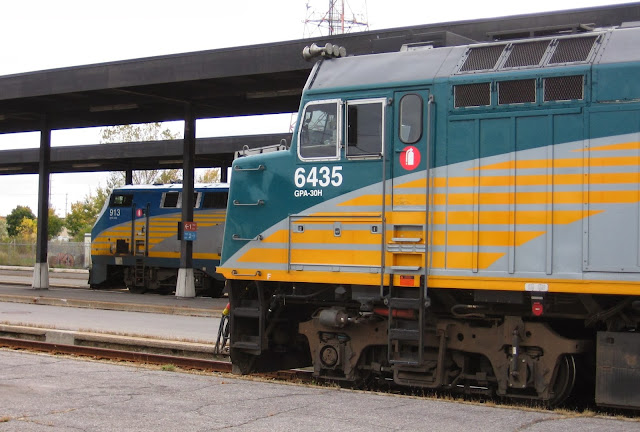 Above: P42 913 and F40PH-2 6435 idle at Ottawa's central railway station. Note the difference between the classic Via blue and yellow and the new Renaissance scheme.

I was a little surprised to see F40PH-2 6435 with two streamliners in tow, up against bumpers when I visited the station on my lunch break last week. The F40 was idling, so I was curious why it had been backed up on this track and where it was headed. But it was a stroke of good luck for me, since this track offers a great vantage point for photos, as it is close to the parking lot and platform.You can see streamliner coach 4122 below. 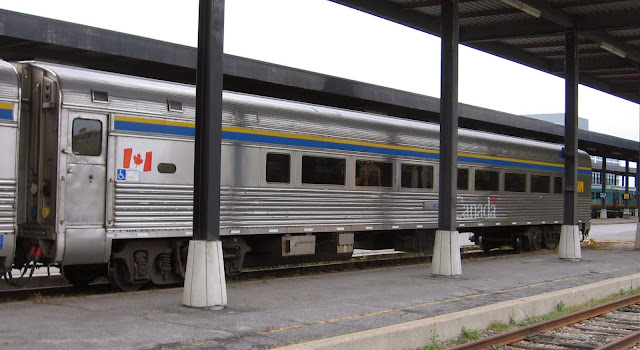 In the photo above, you can just make out some Renaissance cars to the right, which were part of Train 45 headed west for Toronto. That train was four cars in length, towed behind a P42. As I mentioned, the two-car streamliner consist was very close to the platform and the parking lot, allowing for some shots that you cannot usually get. Here's a shot from the rear of streamliner 4122, with a Montreal-bound consist of Renaissance cars idling a few tracks over. I'm backing into the real highlight of the afternoon. See below. 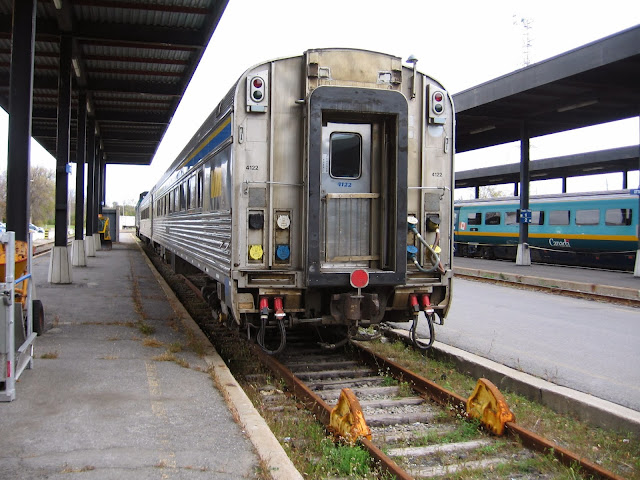 I very rarely see this in Ottawa. P42 913 and F40PH-2 6459 linked together. It's interesting to see the two of these locomotives together, because it allows you to see just how different they are. Compare the long, more streamlined GE in front with the more angular F40 behind. Also, you can see the contrasting paint schemes, as the GE still sports the traditional Via blue and yellow while the older rebuilt F40 sports the modern Renaissance green and school bus yellow. I am glad to see the maple leaf incorporated into the Via logo and the flag removed from the side of the rebuilt engines. I also like that the Government of Canada wordmark has been removed from the F40. It's also much less obvious on the Renaissance car behind. I always prefer simplicity to clutter. I still prefer Via's original blue and yellow paint scheme and its silver and blue streamliner look. I think the Canada wordmark on the old silver cars is downright gaudy. I digress. 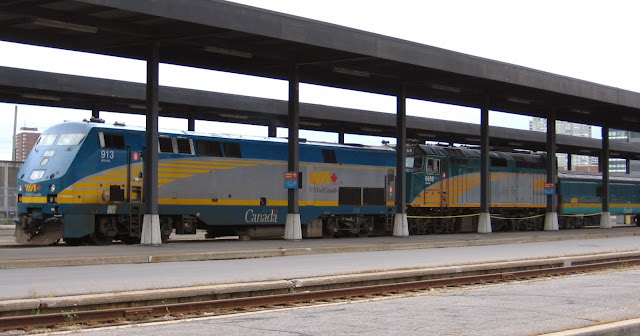 Here's one final wide shot of the the Montreal-bound consist on the left, the streamliner consist on the right, partially hidden behind a shed, and the local snow plow on the far right. All in all, it was a nice break in my day to see the silver and blue back in Ottawa and to see the relatively uncommon pairing of new and old motive power. It must be fall in Ottawa.

A very nice study of some great observations at Ottawa, Michael.

There are many enthusiasts these days (me included sometimes) that bemoan the lack of variety and interest in current operations.

I think it's important and entirely valid to record the scene before you as it is. There is still variety and interest, as you've proven again in this post.

Another example is Michel's night-time video of the Ocean at Moncton, lifting, are you sitting down, three LRC cars, three RDCs and tacking them on behind three 6400's, a Ren consist and a Park car. Now there's more variety.

Interesting formation on the Ocean. Thanks for pointing it out. It's well worth the visit over to YouTube. Thanks for the comments, Eric.