The random photos have their day

As I prepare posts each week, I keep coming across photos that I'd like to write about, but never seem to fit in with my topic du jour. This week, I thought I'd do a little bit of house cleaning and present some odds and sods from my rail watching adventures past and present.

First case in point: A maroon Dupont covered hopper and the familiar "Sclair" orange covered hopper on an industrial spur at the Katoen Natie warehouse facility in Corunna. I took this photo in 1993. At the time, both the maroon Dupont and orange Sclair cars were a common site on this CN rail line, which extends south from Sarnia through Corunna and Mooretown all the way past Courtright. The orange hoppers were common on both the CSX Sarnia Sub and all around CN's Sarnia operations, due to the presence of the Dupont facility in Corunna. The Sclair brand now belongs to Nova Chemicals. The reporting marks on these hoppers now read NCLX rather than DOCX.

I remember finding an old brake shoe lying near the tracks and carrying it home as a souvenir. This line is still quite active, as it serves a number of refineries south of the Chemical Valley including Nova Chemical's Corunna and Moore facilities and a host of others. 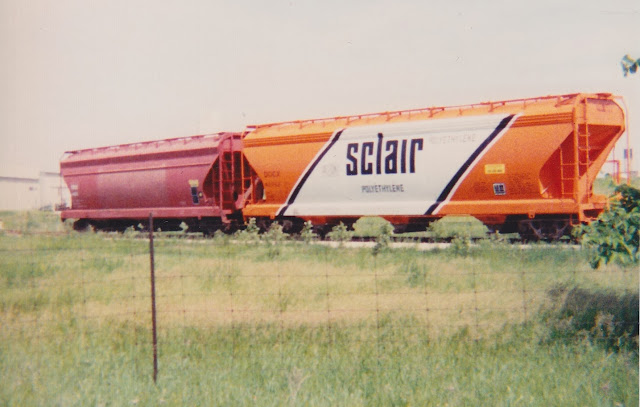 This shot below was taken during this past Thanksgiving Weekend when I made a very brief trip to Sarnia and took a bunch of shots. This was a small logo I found on the side of a CN cylindrical hopper at a CN "transflo" facility where a string of hoppers were pushed up against a bumper and awaiting loads from dump trucks. This Agrium logo, complete with maple leaf-waving Kangaroo, shows that the hopper was once used in the west for transporting potash. 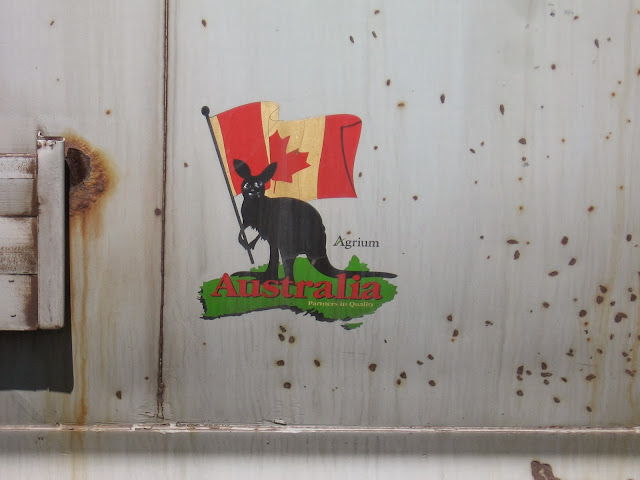 Here's another throwaway shot, at first glace. I took this as part of my recent Thanksgiving visit to the Sarnia area. I was able to get a bunch of great shots of CSX GP38-2s at the end of the Sarnia Sub. As GP38-2 2570 began to grind to a stop, I saw something in the distance, which was off limits to me, since it was on CSX property. I tried to zoom in and get a quick shot. Take a look just to the right of 2570 and you will see a yellow maintenance-of-way crane car. A very rare site on the Sarnia Sub, at least in my experience. You may also notice both 2570 and 2757 (to the right) have flashing beacons on the right side of their cabs. I assume this is for indicating when the unit is being remotely controlled. I'm sure someone more knowledgeable on such matters can clarify this, if I'm wrong. The next time I am in Sarnia, I will search diligently for that maintenance-of-way crane car. 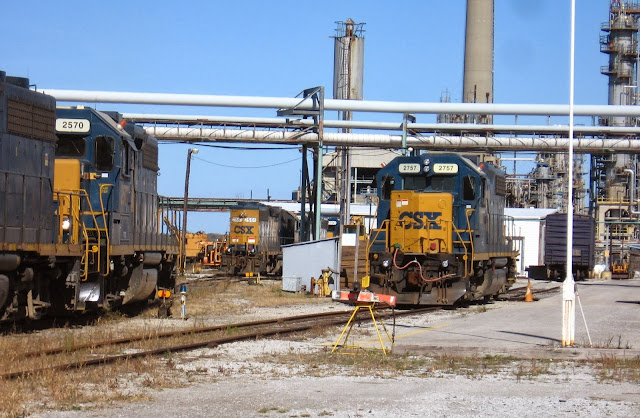 The next shot is from Kitchener, where I lived for two years. This photo also marks an amazing opportunity missed. I lived very close to a park on the city's east end, called Kolb Park. The park is nestled against the Grand River, which separates the city from the town of Breslau. The Goderich-Exeter Railway runs through the park. This trestle was just begging for a railway-in-action photo, but I was not in the habit of taking photos of trains at that time. It's a shame, because this trestle hosts Via trains, GO Trains and freight trains on a regular basis. One sunny day in the fall of 2008, as I was biking along a riverfront trail, I thought that it was a good idea to get a shot of the trestle. I wonder how vandals were able to write so legibly so high up there. 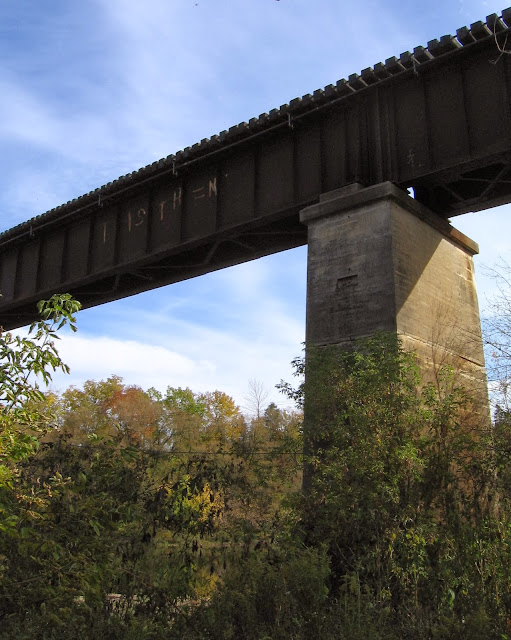 The final shot shows the front of an evening Via train headed for Toronto in 1991. It was idling at Sarnia station. I'm pretty sure we were dropping off my sister as she headed back to the University of Waterloo after a visit back home. I wandered off the platform and tried to take a shot of F40PH-2 6441 from the edge of the track. I seem to remember standing at the edge of the rail and reaching my hands in front of the locomotive to get this shot. This is sadly the only shot I have of a Via F40 in the old paint scheme. I think I had better shots at one point, but these have been lost over the years. I must stress one thing: Don't ever do this to get a shot. I was young and stupid. I no longer take such risks.

You will notice the intermodal cars to the left of the Via. What's noteworthy is that the containers are only single stacked, which was a necessity in Sarnia before 1993 when the new St. Clair Tunnel beneath the St. Clair River to Michigan was built. (Feel free to read Part I and Part II of the St. Clair Tunnel posts if you haven't already) The old tunnel's size restrictions meant intermodal traffic had to be single stacked, while autoracks and high-cube boxcars were ferried over the river. You can also see a tank car with an orange racing stripe. Don't see too many of those anymore. 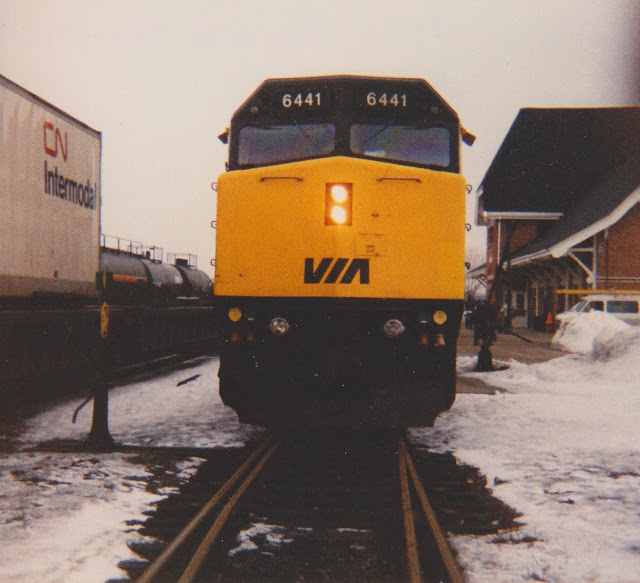 Random, but not meaningless nor unconnected photos, Michael. Such photos each tell a story, ask for further analysis, and lead to other questions to be answered.

The Sclair covered hoppers, for example, were often photographed (how could anyone miss them?) but you've managed to tie them in to a particular shipper. Type Sclair into the Trackside Treasure search box, and I have two posts that include them.

I have random photos too, and I haven't managed to tie them together into a post yet. But they're all joined together by randomness, which makes them all something in common with each other!

I'm glad you see a thread, Eric. I guess the only thread I see is that I wanted to share each photo but was unsure how to fit them into ideas I had for future posts. Thanks for your comments.