Banff was a train watcher's dream for me in 1992. That summer, my parents allowed me to travel to Alberta on my own to visit my aunt and uncle in Calgary. I had just finished grade nine and was eager to have an adventure on my own.

While in Alberta, I was also able to spend a few days in Banff to visit my sister, who was spending the summer there working at a Smitty's restaurant before heading back to university in Ontario in the fall. One evening, my sister was nice enough to take me to Banff Station to see if there was anything for me to shoot along the rails. Unfortunately, there was nothing except a few old gondolas on a side track. All in all, a disappointing first attempt at getting some shots of trains in the Rockies. But the next evening proved to be a gold mine. 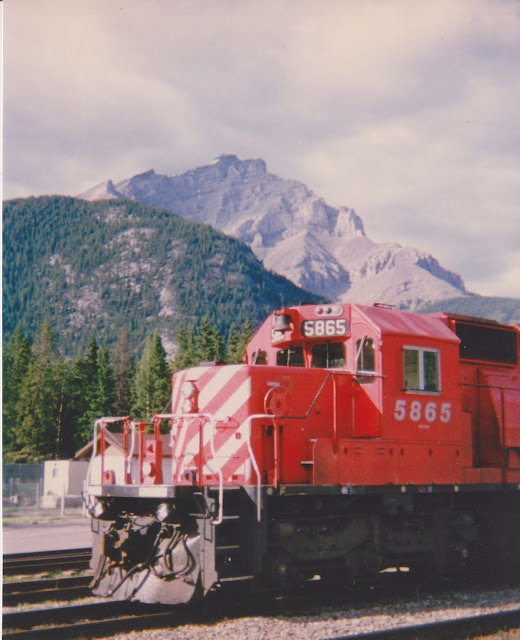 Above: CP SD40-2 5865 is parked and awaiting a new crew in Banff, with a load of grain hoppers behind. This was my first attempt at creating an artistic photo.

In fact, all that remains of that first evening of photos is this shot of a local employee returning on his speeder. He made sure to give me a wave as I took a quick shot in the fading sunlight. 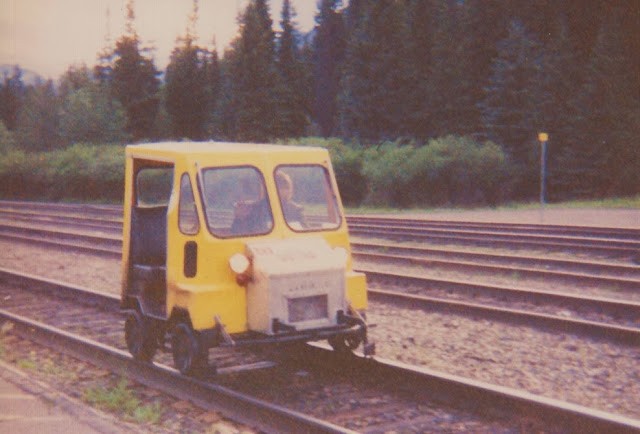 As you can tell from the top photo, the next evening proved to be much better. As my sister and I approached Banff station, we saw a CP grain train parked, awaiting a fresh crew. I don't know enough about CP's western operations to know if Banff was a crew change point at the time or if it still is. Once again, I will rely on my readers to let me know. Either way, the train was sitting there, complete with three units. The lead SD40-2 had the multimark, which was a bonus, since many of the shots I had been taking of CP units in Windsor in the 1990s were missing the multimark. 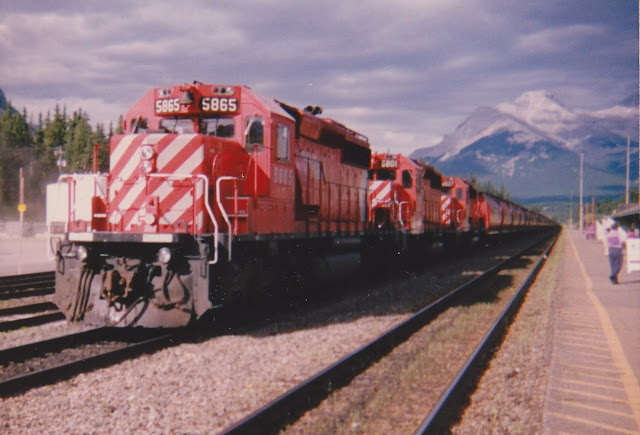 Case in point. The second unit on the train, SD40-2 5801 was missing the multimark. I was smart enough to cross the tracks and find a spot on the sunny side of the train to get some proper shots of the locomotives. At this point in my rail pursuits, I often failed to get the sun behind me when shooting trains. This time, I was fortunate to get it right. You can see Tunnel Mountain behind this unit and a small piece of Banff's beautiful station. 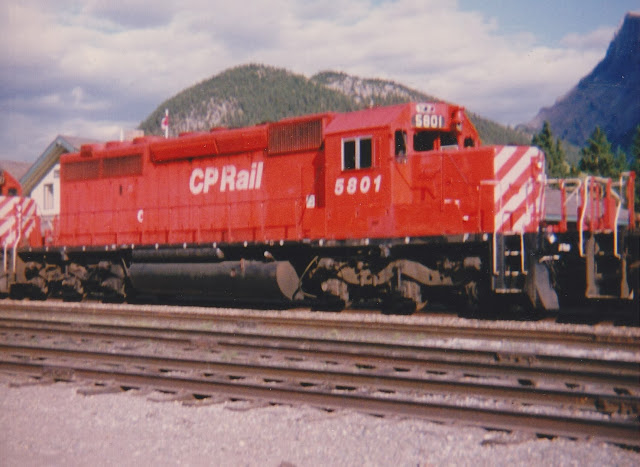 I was also smart enough to get a few shots of the Government of Canada cylindrical grain hopper cars, including this one. At the time, I always regarded shots of typical rolling stock as throwaway shots, but I am grateful that I was able to recover this shot from my archives. I have two of these hoppers in my HO scale collection, which is boxed away at the moment (no room for a layout right now). 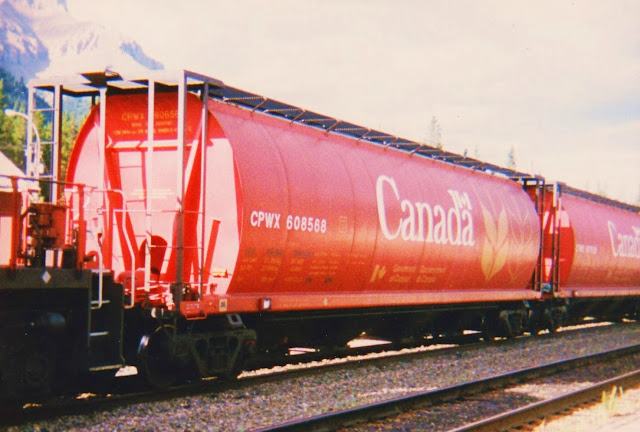 Banff Station has been the site of some of my most prized rail photos. Years before, when my family visited Alberta, I was lucky enough to get a tour of a CP Rail SD40-2 from an engineer named Rick. The SD40  was towing a lame Via F unit and a string of streamliners. I know photos of this encounter exist somewhere in our family archives. I intend to track down these shots over Christmas and share them here in the new year. I know my Dad also took shots of grain trains in the Rockies, which are also in the family archives somewhere. Again, when I have them, I will share them.

But, for the sake of this post, I will just mention that, on this evening in Banff, there was one more surprise awaiting me and my camera. Come back next week for part two.
Posted by Michael at Thursday, November 14, 2013

Lovely photo of 5865 with the mountain behind it!

I don't think Banff is a crew change spot but I could be wrong. CP does have an office-like building down the tracks from the station, though.

Banff (and the area around it) is probably my favourite place in Canada to take train photos.

Just like being there, Michael. Though I was never able to stop in Banff, I travelled through it aboard VIA Rail and the scenery was unparallelled.

Some people have trouble spelling Banff. One cartoonist, Doug Wright, highlighted this by showing the CP signpost as 'Bbanf'.

Thanks for the comments, Steve and Eric. Steve: You would cringe at the camera I used to get that top photo. Eric, I agree that the scenery in Banff is without peer. I am lucky to have these shots. More to come next week.