Sarnia has always been a railway town, thanks to its petrochemical industry and its location along a key rail corridor between Toronto and Chicago. The Great Western and the Grand Trunk railways were the first major railways to establish operations in Sarnia. By the end of the 1800s, the Grand Trunk's main line through the city was an extremely busy link between Toronto and Chicago. However, ferrying cars across the St. Clair River into Michigan was hurting the railway's business, which led to the construction of the St. Clair Tunnel, North America's first underwater rail tunnel. The tunnel was constructed at a cost of $2.7 million and opened in 1891.

Some quick statistics about this tunnel:
Amazingly, when crews met and completed the digging process, they were off only by a fraction of an inch, which many consider to be an incredible feat of engineering for 1891.

The tunnel, seen in this undated Pesha Studio photo below, reliably served the Grand Trunk and its successor, Canadian National, for decades. Trains were originally pulled through the tunnel by Baldwin-built locomotives, which gave way to electric units and catenary wires in 1907 when concerns arose over engineers and crewmen suffocating in the tunnel amid the exhaust from the Baldwins. 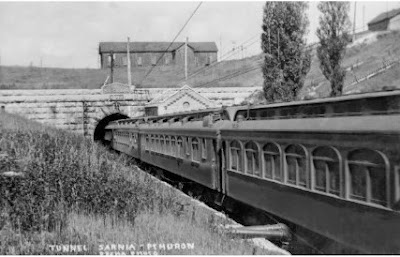 Sarnia was proud of its tunnel, which was once regarded as the longest underwater rail tunnel in the world. The city was sometimes known as "Sarnia Tunnel" as you can see from this postcard below. Notice the two types of horsepower in the 1920s onward. The Baldwin locomotives were replaced by the Westinghouse electrics for the tunnel trips, but they were still used around the Sarnia rail yard. 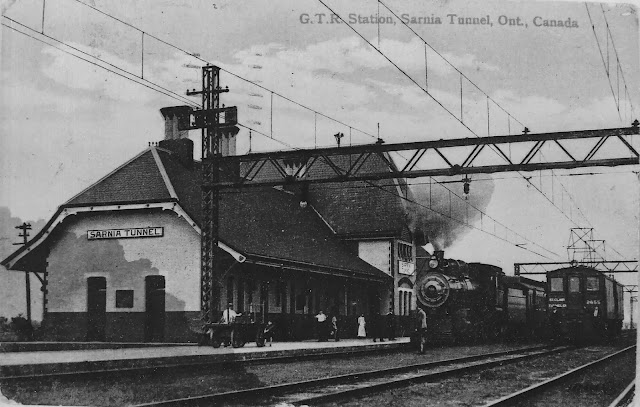 In the late 1960s and 1970s, railway cars grew, mainly due to the advent of large boxcars (hi-cubes) and tri-level auto racks. These cars were essential pieces of rolling stock in southwestern Ontario, since so many auto parts and vehicles had to be shuttled between automotive production facilities throughout Ontario and Michigan. This presented a problem to CN, since the tunnel could not accommodate these cars. By the 1980s, the old tunnel became more of a liability, with the advent of double-stack container trains. CN ferried many of these oversized cars over the river, creating the same problem the Grand Trunk faced in 1890s. The flow of goods was simply too slow between Toronto and Chicago.

This created scenes like this one below from 1992, with CN workhorse SW1200s shuttling long lines of auto racks onto its Point Edward spur, which led to the CN ferry along Front Street in Sarnia's downtown waterfront area. 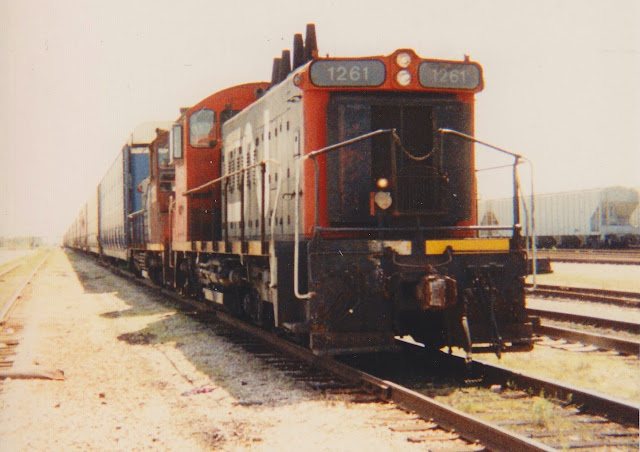 This also created the problem of lag time in the Sarnia yard (below photo from 1992), with hi-cubes like this Conrail boxcar (coupled to a Burlington Northern autorack) languishing in the rail yard for long periods. In an era of just-in-time delivery demands, CN knew it had to serve its automotive customers in a more timely manner. 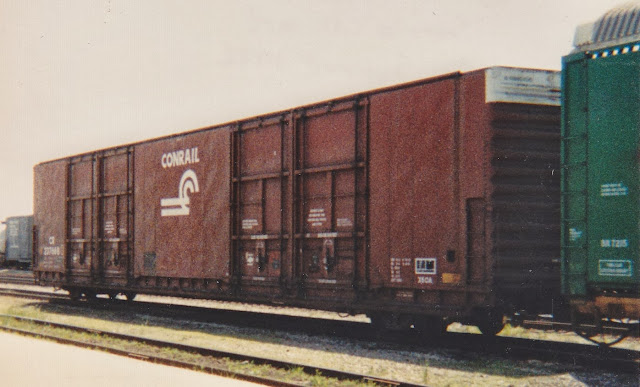 Autorack traffic continued to expand on the CN Strathroy Subdivision, which ends at CN's Sarnia yard, and along CSX's Sarnia Subdivision, which interchanges with CN near the yard. This created a backlog of oversized freightcars at the ferry staging yard in downtown Sarnia. The photo below is from Summer 1993. I'm not sure what the cargo on that flatcar is, but my guess at the time was that it had something to do with what was going on in the photo at the bottom of this post. 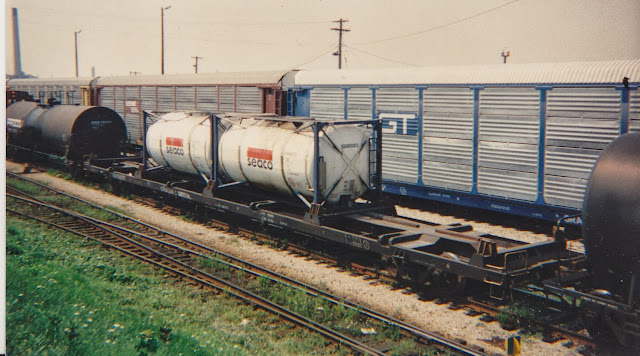 In 1993, a boring machine called Excalibore started clearing the way for a new St. Clair Tunnel that would accommodate the oversized rail cars (below photo is from Summer 1993). This would usher in a new era of railroading in Sarnia. 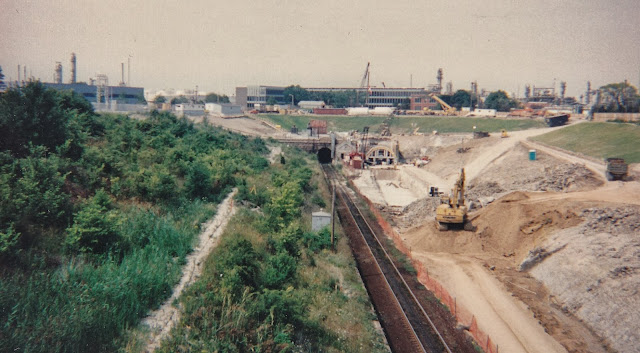 Nice post, Michael. I saw a train of Lovat boring (well, I thought it was interesting) equipment on CN through Kingston, likely heading for Sarnia.

I wish I found your blog earlier - very interesting photos and facts.

The station called Sarnia tunnel likely because CN/Grand Trunk likely had several stations in the Sarnia area - including the old Forest Sub into Point Edward - perhaps Sarnia Tunnel was named to prevent confusion with a station closer to Downtown.

Thanks, Shawn. Whether you're late to the game or not, everyone is welcome on the Beachburg Sub. I agree that the station was likely named "Sarnia Tunnel" because there was more than one station in the city. I recently came across an old photo of another station in the city, this one near the waterfront, which operated at the same time as the Sarnia Tunnel station.

We in Seattle are suddenly interested in Sarnia because the bearing problem that stalled Excalibore is similar to what's delaying the Highway 99 tunnel machine Bertha on the Seattle waterfront.
http://seattletimes.com/html/localnews/2022880522_berthabearingxml.html