Via Rail over the Jock River

Ottawa is a vast city with a beautiful countryside. In my end of town, a quick jaunt south down Moodie Drive leads to a rural Via Rail level crossing near the meandering Jock River. The river works its way through Ottawa's southern suburbs and crosses Via's Smiths Falls subdivision just a few metres west of Moodie Drive. I ventured out to the Moodie crossing to get some shots a few Sundays ago. 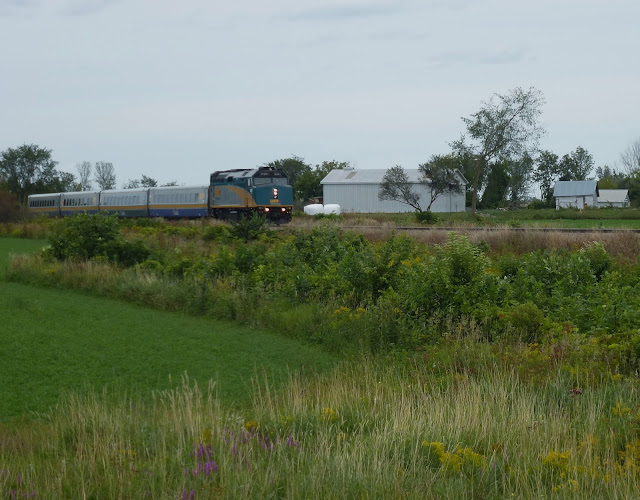 Above you see Toronto-bound Via train 657 making its way toward the Moodie crossing. As you can see, you don't have to venture far outside the urban part of Ottawa to find trains in a rural setting. This shot was a five-minute drive for me. Below you see a closer shot of the consist led by FP40PH-2 6401. On both sides of the track, you will find farmland, although the side closer to me appeared to be fallow. 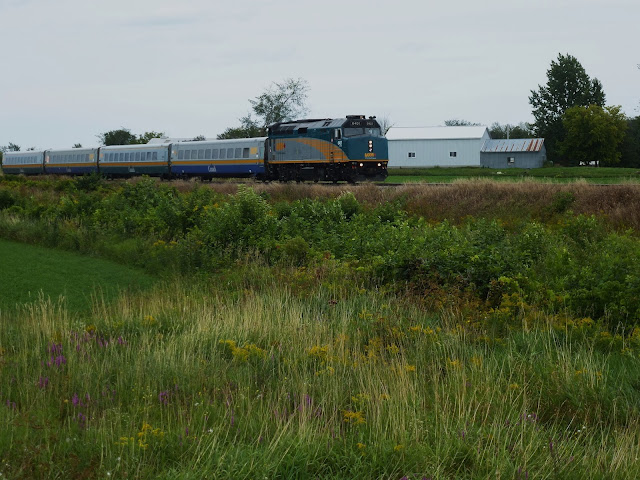 I was reasonably happy with these shots, but was waiting for the train to cross Moodie Drive so I could get a shot of train 657 crossing the Jock River trestle. I had to move quickly since the train was moving at quite a clip even though it had just left nearby Fallowfield Station in Ottawa's Barrhaven neighbourhood. As you can see below, the consist had both refurbished LRCs and older coaches, making for a fairly typical multicoloured consist. I was not able to get all that close to the actual trestle, which would have provided a better shot. I have seen some local railfans gets shots from the Jock River. I'm guessing it will be easier to get shots in the winter when the river freezes over. 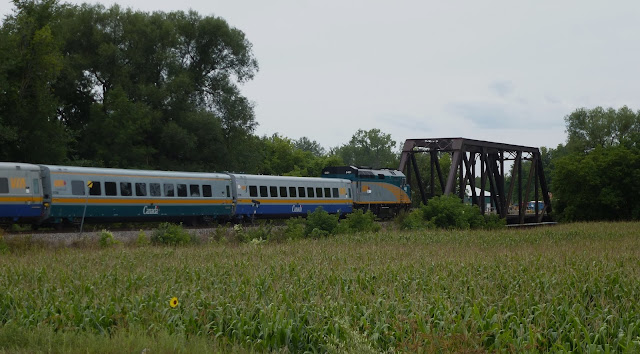 So, the window of opportunity for shots was relatively short, but I do want to point out one thing about the above photo and image below. A lonely sunflower stood by the side of the road right at the edge of the cornfield. Do you see it? 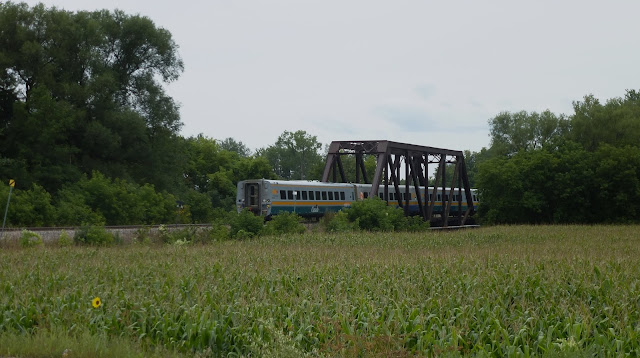 This stretch of track is undergoing a series of improvements including installation of passing sidings, replacement of ties and ballast, adjustment of curves and implementation of central traffic control, among other initiatives. There will be work done on the Jock River bridge as part of these improvements. The goal is to eventually allow trains to reach 160 km/h, which equals 100 mph. You can read about it on the Via site for yourself.

This stretch of track is especially important for Via, since it still has an industrial spur that leads to the massive Kott lumber yard. That facility, according to local rail watchers, is still served by the Canadian National, most likely in the evening when the last Via train has passed by. There's a good discussion of local Ottawa rail operations in this post on the Trackside Treasure blog.

One last photo to share, on a somewhat related note. I was at the Central Station the other week and caught Via Train 50 on its way to Montreal. I don't remember the last time I saw a two-car consist. It's hard to shoot Via trains in the morning at the station since you're always on the shadow side of the train and access to the sunny side is limited. 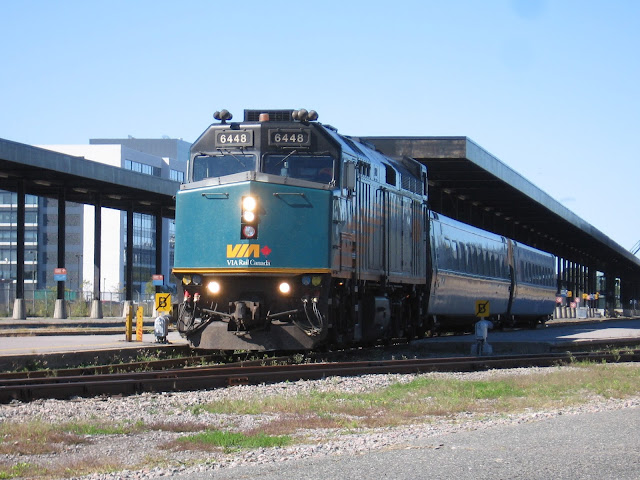 Very pastoral indeed, Michael. That sunflower is Out Standing In his Field! Your photos remind me of a similar then & now Kingston Sub post:

Liked that VIA No 50 station photo!
Eric

Where can I find details (public docs online, newspaper article, etc.) about the upgrades to this track? I presume it came along with the decision to triple-track parts of the Kingston Sub. I'm all for expansion of rail services, but what necessitates a passing siding here?

Hm, maybe I take back that last comment. I see that the trip between Ottawa and Smiths Falls is ~56 mins. and this point past Fallowfield is about 20 minutes along the way. Presuming the Ottawa-Fallowfield stretch won't speed up too much (too urban), if the rest of the route is reduced by about ~10 mins. with a faster speed, that puts this part just under halfway between the two. Kind of strange to think of Barrhaven as halfway to Smiths Falls!

Bryan -- I would think Via Rail has some documents in the corporate part of their site that outline the plans for this sub in detail. However, the basics can be found pretty easily on the Via site by clicking on the link in the post above. Thanks for your comment.