Ottawa's Capital Railway gets a facelift

Ottawa's O-Train, formally known as the Capital Railway, runs along the old CP Rail Ellwood sub and is by most estimates a runaway success. The Bombardier diesel trains have proven to be a massive hit with commuters since they first began running in 2001 between Greenboro Station in Ottawa's south end and Bayview Station, just west of Ottawa's downtown . The city estimates that the trains have accommodated 21 million commuters since their debut.

This past spring, the line fell silent as the city began a $59-million overhaul of the 8-kilometre line to allow the trains to make the run in eight minutes from the current 15. This will be accomplished with the help of two new passing tracks and six new trainsets. As it stands now, there is only one section of the railway, at Carleton University, where the trackage has been doubled. Two trains ply the route each day and coordinate their schedules so they arrive at the university at the same time as they head in opposite directions.

I have been visiting Bayview Station lately, to see how the work is progressing, which has proved to be a disappointment. My patience finally paid off last week when I saw the trackage in the beginning stages of being replaced. I was surprised at how the track was being removed, as you can see below. 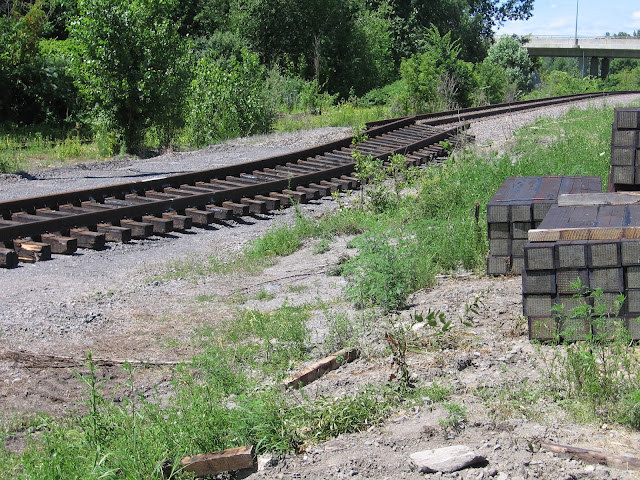 Above: End of the line (for now). Trackage leading to Bayview Station is being torn up and the bed prepared for new rails. New ties can be seen to the right. Smell the creosote!﻿ 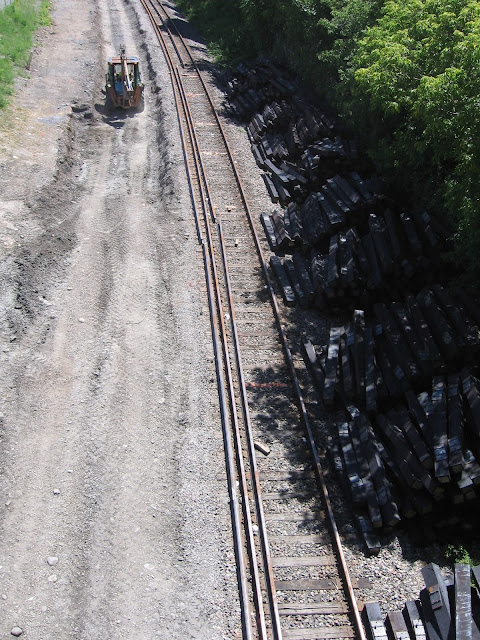 Above: View of the new roadbed being prepared from the Somerset Street overpass.﻿
Below: A few days later, the trench is moving. 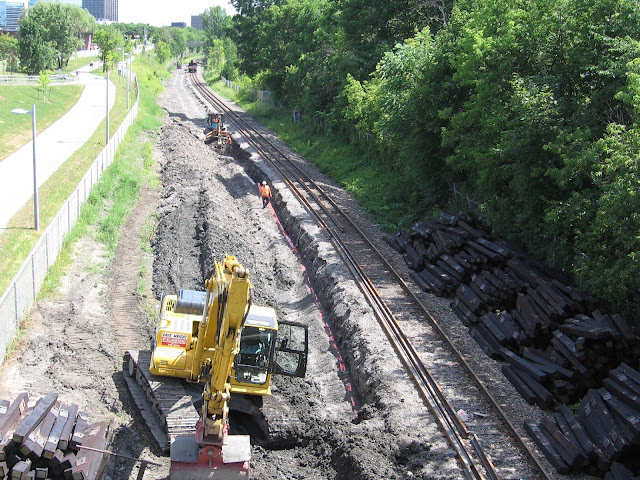 The new O-Trains are Alstom-built Caradia LINT diesels and have been the subject of lots of attention from interested light rail advocates here, like this shot from the Skyscaper Forum. I will actually miss the Bombardier O-Train, whose look I grew to appreciate. The new trains are apparently quieter and use less fuel. Here's a shot of the new and old O-Trains together. The new O-Train is on the right.

The new O-Trains will be tested this fall when service resumes in time for the new school year at Carleton University. The new, faster schedule will be in effect after the testing is complete. It sounds like this will happen sometime early in 2014. 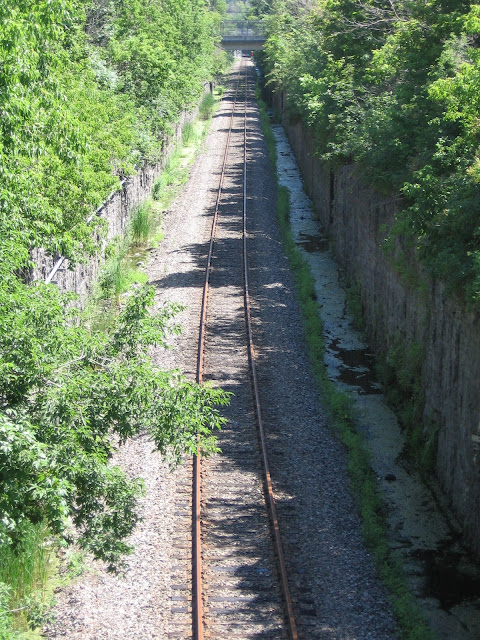 Above: Can you see the red signal still operating in the distance? Capital Railway around Young Street in Ottawa.

The O-Train line is one of the more scenic you will see in a city. Its picturesque crossing of the Rideau River on a vintage trestle is a favourite of train watchers here. Most O-Train shots you'll find online are of this trestle. This shot above is shot looking south from a pedestrian bridge at Young Street in Little Italy. You can just make out a red signal still operational, even though the line hasn't been used in months.

My guess is that this line will be torn up from north (Bayview) to south (Greenboro) and then a new track will be installed from the south end to the north end, since its only operational connection to an outside rail network is the Walkley Diamond junction with the Canadian National's trackage in the city, near Walkley Road.

The amazing thing in all this flurry of renovation is that the city has still not even seriously considered extending the Capital Railway's O-Train service to the Ottawa International Airport on existing trackage from the old CP network in the city. The tracks are still occasionally used when the National Research Council needs various rail cars to be delivered to its surface transportation testing facilities near the airport, so it's not as though significant repairs need to be made. However, for whatever reason, this option has not been seriously considered. 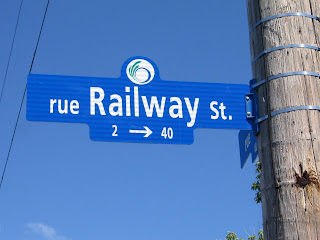 So, for now, all is quiet along the Capital Railway until this fall.

Thanks for this update, Michael. I can indeed smell the creosote baking in the sunlight of a summer's day! Progress!
Eric