The end of the CN Strathroy Subdivision is a train watcher's dream. CN operates a massive rail yard and a couple o﻿f picturesque local spurs in Sarnia. The most intriguing of the local spurs is the Point Edward spur, which is a curious run of trackage with an interesting history. According to local rail watchers, the line has 2.9 miles left. Much of the trackage into Point Edward has been lifted (for those who don't know, Point Edward is a village at the mouth of Lake Huron surrounded on all other sides by Sarnia). Those who have been to Sarnia will know that CN once ran rails as far as the Bluewater Bridge. The Point Edward Casino is in fact, an old CN freight shed.

In the early 1990s, the Point Edward spur was a busy stretch of track as a host of CN SW1200s shuttled countless autoracks and hi-cube boxcars onto the old CN ferry, which was the only means the railway had of moving these oversized cars across the St. Clair River into Michigan onto the St. Clair Subdivision of CN subsidiary Grand Trunk .

This section of the spur (seen below) was just beyond the edge of the Imperial Oil refinery in the south end of Sarnia. This area, located near a retirement home and the Sarnia Observer offices, is now just a single track. Before 1994, it was triple tracked and a hive of activity as the influx of oversized cars grew. In 1993, with the influx of double-stack container trains forcing its hand, CN started construction of the Paul Tellier Tunnel, which was able to handle these cars. In 1994, the tunnel replaced the original St. Clair Tunnel, which was dug by hand and had been in operation since 1891. The ferry service ended at the same time and the Point Edward spur grew increasingly quiet. 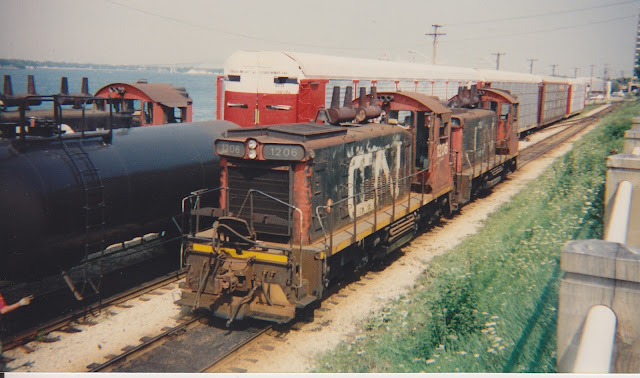 Above: CN SW1200 1206 and 1317 work a switch job near the St. Clair rail ferry along Front Street in Sarnia, Summer 1993. The Bluewater Bridge is barely visible amid the haze in the background. 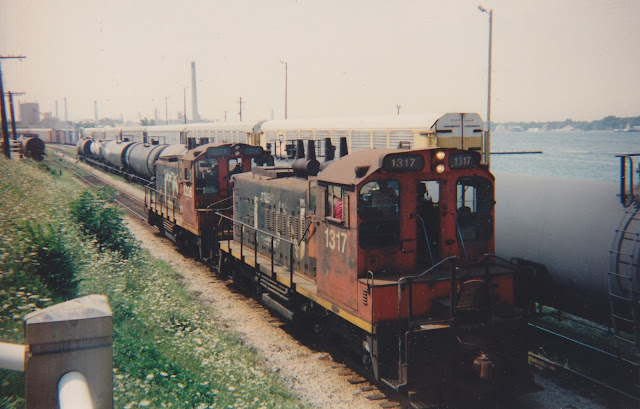 Another shot of the pair of SW1200s at work in the Summer of 1993 near the rail ferry. You can see the dock for the old ferry jutting out into the St. Clair River, just behind the UP autorack. The Chemical Valley is also visible.

The Point Edward spur is a curious run of track, which runs along the Sarnia waterfront, behind office buildings, through Alexander Mackenzie Park (Canada's second Prime Minister spent many years representing Sarnia in Parliament) before it crosses Front Street where it then runs parallel to the street. The trackage then crosses Front Street again and runs through Centennial Park where snakes its way to the government wharf, where it services the massive Sarnia grain elevators, that store goods from Great Lakes freight ships.

The line continues to operate for the sole use of servicing the grain elevators. Curiously, even today, large stretches of the line are not barricaded by any fencing, including the stretches that run through city parks. It makes for nice photos, but it also requires vigilance. It also makes for easy access to special trains, like the CFL Grey Cup special, which set up shop on the spur during the cup's centennial celebrations in 2011. 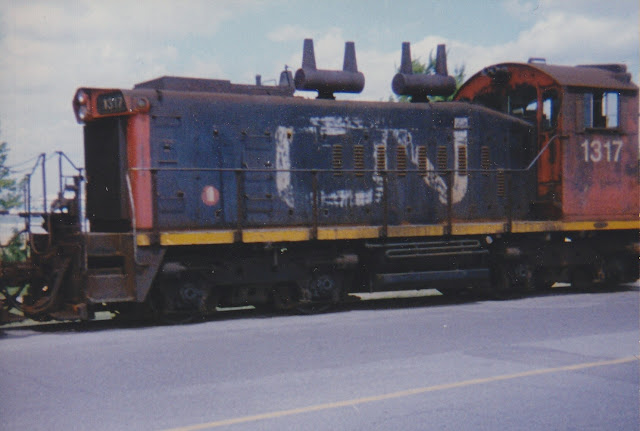 ﻿What I love about the spur is its level crossings along Front Street. Since the activity on the spur was light beyond the rail ferry in the 1990s, you were lucky to catch trains crossing Front Street and trundling along through Centennial Park. This shot (above) I took around 1993. You can see the crossing is an awkward one as the line angles across the street. Watch out cyclists!

This shot below best illustrates how this line remains a curious part of downtown Sarnia. Here it runs along Front Street next to manicured gardens and apartment buildings on the other side. Notice the father and son sharing a moment as the engine roars by and the engineer giving a wave. 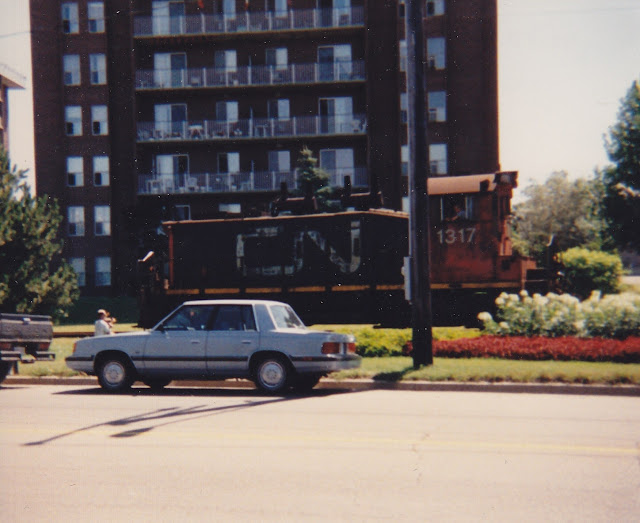 The SW1200s have disappeared from this spur, judging by more recent photos I've looked up online. In the 1990s and beyond, these little engines were workhorses for the CN in Sarnia in its rail yard and on its local spurs. I find it interesting that, in an era where we encase our children in bubble wrap and hockey helmets just to let them ride a bike, this spur still wends its way through city parks with no fencing. No one seems to get hurt and everyone seems to enjoy watching a train go by.

FREE STUFF: Do I have your attention still? You might notice an addition to the right sidebar section of this blog. In addition to blogging, I am also a published author. My first novel was published in 2006 by Baico Publishing. I have uploaded eight ebooks online, which vary in length from short story to novel, and all are available to read (some are free, two are half price until the end of July). They are all works of fiction. The ebook cover you see to your right (King Eddie) has a strong railway connection. It is based on actual stories I heard from union leaders and people I interviewed when I worked as a business and labour reporter in Kitchener. Please take a moment to check out my author's page and feel free to upload an ebook onto your reader.
Posted by Michael at Friday, July 26, 2013

Nice post, Michael. An interesting operation superseded by the tunnel.

CN SW's were ubiquitous in so many settings; real workhorses.