Ottawa's central train station hosts a number of Via passenger trains each day, connecting to Toronto and Montreal. I've been by the station a few times in the past weeks on lunch breaks and weekends, to get some shots of new Renaissance coach consists as well as the familiar LRC consists. The other day, I ventured just east of the station to the Belfast Road overpass to get some long shots of the station's platforms and some elevated shots of outbound Montreal trains. The vantage point is tricky, as there are a number of hydro wires to contend with, along with a fair bit of overgrown brush. However, the overpass offers what might be the city's best best rail-watching vantage point.

The image below is a shot of Montreal-bound Train 54, led by rebuilt F40PH-2 6421 with four LRC coaches in tow. Another train, with P42 909 and Renaissance coaches, sits idle, awaiting its assignment on the next track. I was initially disappointed when I arrived at the station, thinking that the P42 consist would be the train I shot heading east. Thankfully, it wasn't (I'm a traditionalist, what can I say? I don't like the look of the P42s). 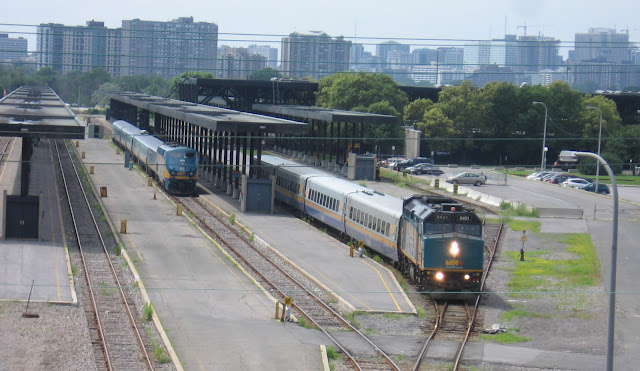 When the train approached the overpass, the wires were less of  an issue. I have rarely had the chance to see a train from this vantage point, other than in Toronto near Union Station. I was pretty happy with these shots below. As you can see, there are fewer wires in the shot below. If you look in the cab of the locomotive, you might see something. Do you see it? 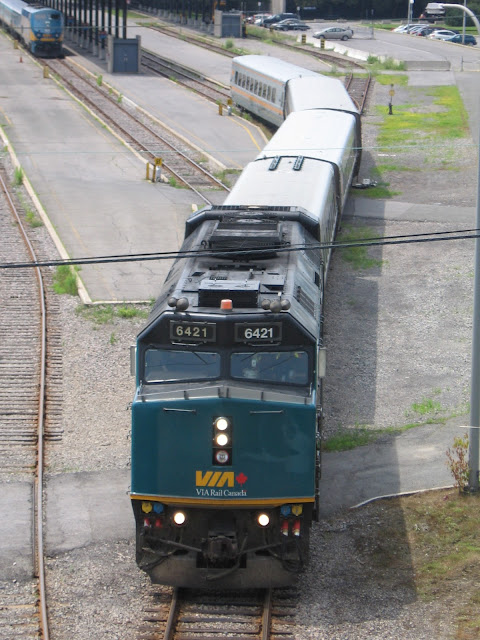 Here's a closer look below. 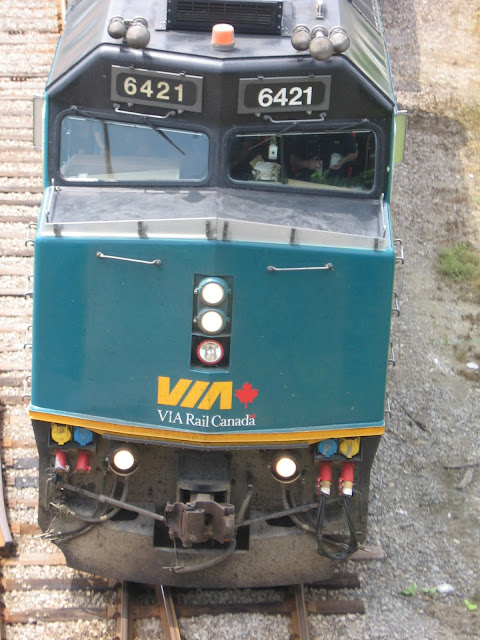 Someone's enjoying a coffee on the right.

Before I headed up to the overpass, I was taking some shots of the idled train with the Renaissance coaches when the coach behind the locomotive caught my eye. I haven't seen this before. 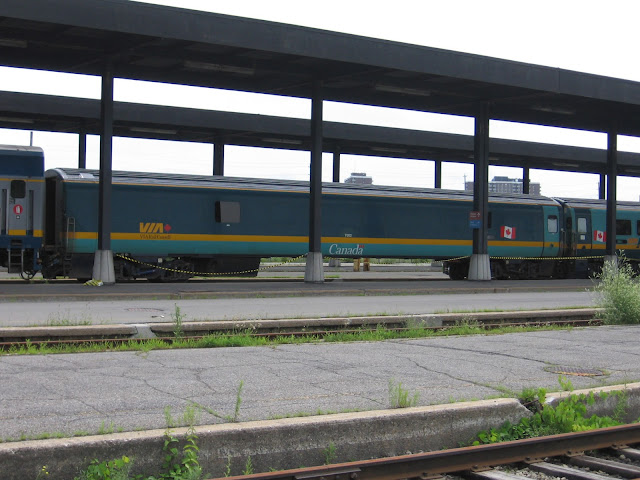 This is Renaissance baggage car 7002, one of only nine in the Via fleet, according to its website. I had to look at it a few times before I realized what it was. It certainly doesn't fit with the image I have of Via baggage cars from its streamliner fleet or its old blue and yellow fleet inherited from CN. I expected to see a giant baggage door but it looks more like a retrofitted passenger car to me. The Via website says these cars were made from the shells of sleeping cars.

While I'm at it, here is a shot of another interesting coach worth noting. I caught this car a few weeks ago on Train 50. It's the new paint scheme for the LRC cars. This swoop indicates that the car is a Business Class car (formerly Via 1).

Beachburg Subdivision Update: I have been asked by a few readers what is happening with the old CN Beachburg subdivision, which is this blog's namesake. At this point, all I can share is that there have been no new reports of the CN rail removal teams coming to Ottawa. In my part of the city, the hopper cars that had been stored near my neighbourhood for months were recently taken away. I first blogged about this in May. I'm not sure if this means anything, since there have been no new reports of rail being removed from the portion of the Beachburg Sub that falls within the Ottawa city limits. I am trying to find out what is happening from a few sources. I will post an update soon.

Good photo angles, Michael. Though sometimes I think the current VIA offerings are a little boring perhaps (no Rens on the Kingston Sub right now) it's all about finding new ways to capture what's running, including new photo angles.

Well, you have to take what you can get in Ottawa. This might be the closest thing we have to a hotspot here, Bryan!