Relics on the rails

Once in a while, you come across scenes along a railway that defy explanation. For whatever reason, a railway sometimes keeps a particular locomotive or car operational (and I use that term loosely here) long past its best before date.

The following are a few photos of some oddities I encountered in the Sarnia area in the 1990s. The shot immediately below represents perhaps the biggest mystery. The first question that came to mind when I saw this car is how it was still standing. The car, which looked to be an old piece of maintenance-of-way equipment, was parked at the dead end of an old siding at the edge of CN's rail yard in Sarnia along Campbell Street. The track was tucked behind an old truck loading depot and transload facility that had long since been converted into a storage building for the railway.

I took the shot in the early 1990s (the original print is undated). I can only hazard a guess as to the vintage of this car, but it's definitely from the era when railcars were still made of wood, so that gives you a good idea when it was built. I tried to find any information about this car online, but as far as I know, this may be the only photo of this old car. You can see a wooden platform on the left, which suggests that car had been parked there and used as some sort of office or storage facility for some time. 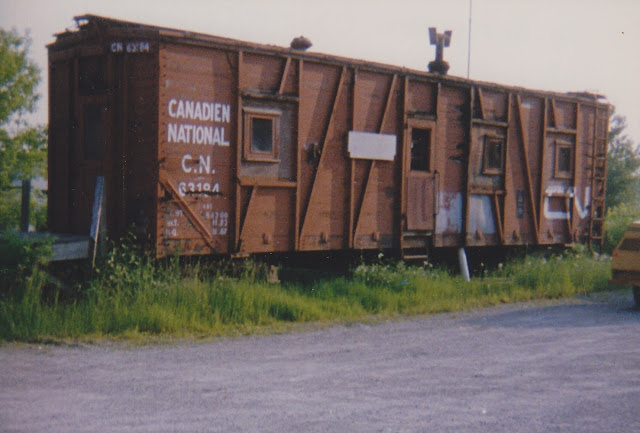 These two maintenance-of-way cars and an old wooden boxcar, below, lingered on the CSX Sarnia Subdivision for more than a decade. They found their way to the end of the CSX sub, at its Clifford Street office, in the early 1990s. The shot below of C&O 911043 was taken in the fall. It looked like it was in better shape than the CN car above. I managed to find one photo of this car in better days when it was in use in Saginaw, Michigan. It's listed as a crew car, which is the term I generally use for these cars. The amazing thing about these cars, besides the fact that they were still in use in the 1990s, was the fact that they still carried C&O markings, which means they survived both the Chessie System and CSX years with their original identity.

This was the wooden boxcar that was hitched to the two MoW cars. You can just make out the "MW" markings next to its car number. I did manage to find one other shot of a MoW boxcar that was similar to this one. Again, the shot is an earlier photo taken in Michigan when the equipment was in (slightly) better shape. You can see in my grainy image that the CSX sub in Sarnia ends in the Chemical Valley. The yard is nestled between the St. Clair River and the Esso petroleum refinery. 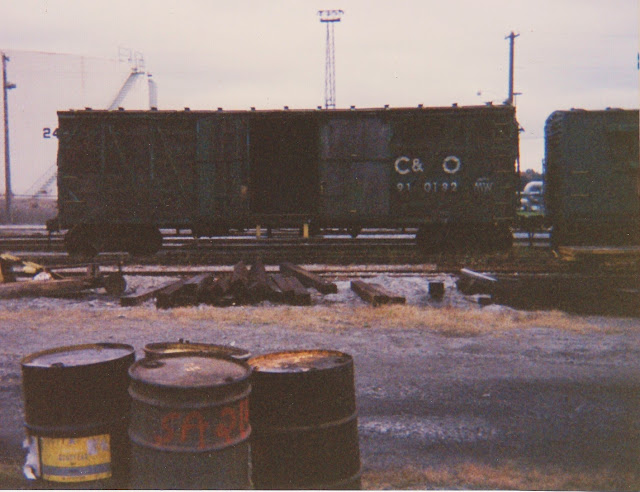 These cars hold great memories for me. The last time I saw those MoW cars before that evening, was when they were parked on a siding along the CSX main line in Port Lambton, where I went to grade school. I remember walking up to the cars when I was a kid and climbing on the handrails. It really speaks to a different time since those cars were parked in the middle of that town for quite some time with no security whatsoever and none of them were vandalized.

This final shot isn't as much of an oddity as the cars above, but I thought I'd include it since I've always loved this shot. This car is an unusual tank car, with a vent stack on the right. I found a photo of a similar car, which was used as a water transporter in maintenance-of-way consists. I know these cars had other uses and I recall blogger Eric Gagnon talking about this type of car in his blog, Trackside Treasure. This shot was taken in 1993 around the old CN roundhouse in Sarnia. 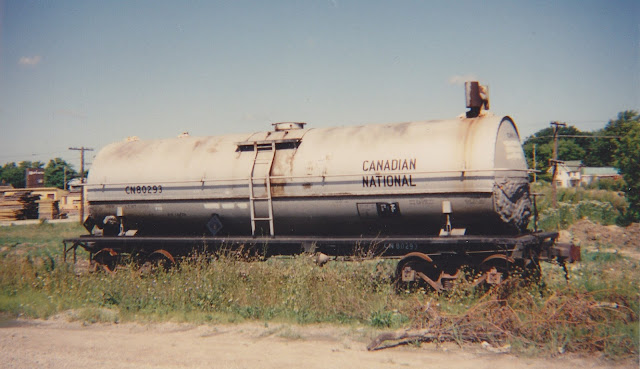 New to the blog? Welcome to all new readers. I am a railway enthusiast living in Ottawa, but my blog covers railway topics from all over Ontario, both old and new. I mainly blog about railroading in the Sarnia area, which is where I grew up, and Ottawa. The blog is named after a CN subdivision that could soon be completely scrapped in the Ottawa area. To learn more, I invite you to read my introductory post.
Posted by Michael at Thursday, August 15, 2013

Great post, Michael. I love this BOTFY (Back Of The Freight Yard) stuff! Those cars have a ton of character and could no doubt tell some stories if able to speak!

Those are old relics... great to see them!