I don't like the term railfanning, but for the purposes of this post, I'm using it to illustrate a few points. In my teens, I loved taking photos of trains, but was woefully ignorant of the rules by which most rail fans abide. I present to you three photos and three stories from my experiences that hopefully serve as reminders of what to do and what not to do.

Lesson One: Pick your spot carefully 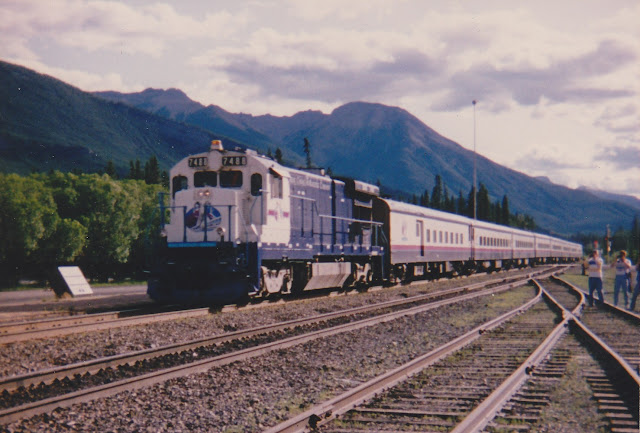 Above: Rocky Mountaineer pulls into Banff Station in the summer of 1991

I learned this lesson the hard way. I was visiting my sister in Banff in the summer of 1991 and had ventured down to the station to get some photos of passing trains. I was lucky enough to catch this tourist train as it pulled in to town. The mistake I made was venturing too close to the train and blocking the view of other rail fans to the right in the photo. They were quite indignant and yelled that I needed to move out of their shot. I had never encountered other enthusiasts in my pursuit of trains around Sarnia before, so I had to plead ignorance. However, it worked out fine as I was able to capture this shot of the tourist train, led by B36-7 7488, with a beautiful backdrop of mountains and twilight sky. Lucky for me, rail fans in Ottawa are even rarer than trains, so I don't have to worry about ruining someone's shot here. 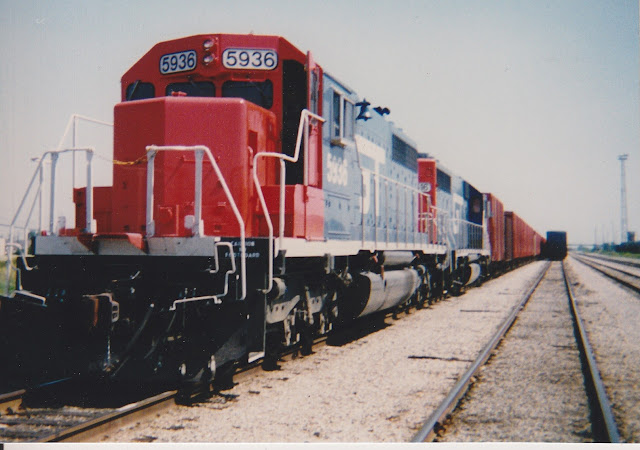 Above: Grand Trunk SD40-2 5936 leads a train destined for the old St. Clair Tunnel to Michigan at the Sarnia rail yard, 1992

I am happy to say that this story does not involve me getting into trouble for trespassing, but that is exactly how I got this shot. The Sarnia rail yard is massive, which made it very easy to sneak around the yard and get the photos I wanted in the 1990s. This doesn't mean you should do it, though. I should have known better, even in my teens, that rail yards are incredibly dangerous places for the average citizen. I do recall being in this area of the train yard, in between tracks, when an engineer yelled for me to throw a switch for him, since I was standing near it and he didn't want to get out of his engine to do it himself. I remember going back to the car, where my brother was waiting and he told me he thought I was in big trouble when he saw the engineer yelling to me. That was the first time I ever realized that maybe I should be more careful. I was very lucky that I was never was caught or hurt in my teens. Lesson learned.

Lesson Three: Take Shots of Everything 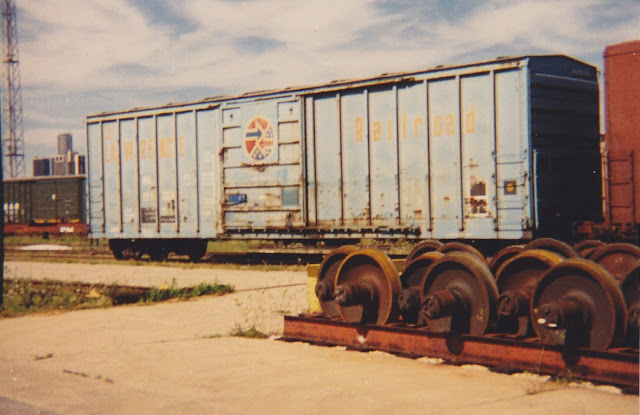 This lesson is especially easy to apply today with digital cameras allowing rail fans to take as many shots as they want. When I was a teen, I chose my shots judiciously since I only had limited funds to buy film and develop prints. Still, I think of all the shots I took of rolling stock and subsequently discarded, and I could just kick myself. Readers will know that I accidentally threw out all my old film and subsequently lost dozens and dozens of rail photos.

This shot is a good example of why it is important to take shots of everything. At the time, taking a shot of a boxcar had no real value to me. In this case, I had never seen a boxcar with this railway logo, so I took a quick shot. Looking back, I'm glad I did since these boxcars have mostly disappeared. You can make out the Renaissance Center in downtown Detroit to the left of the boxcar. This car was parked near the locomotive and rolling stock repair facility, hence the axles. You can also make out a boxcar and flatcar in the background. Lots to look at in this shot. A typical scene in 1991 but a far more interesting shot in 2013.

Good tips! I would add a fourth, "watch the sun" and keep it behind you. I have so many early railfan shots where the sun is backlighting what I was trying to shoot, and the photo just sucks. :P

I hear you about #3. I took some (film) photos of some odd boxcars and so forth in New Brunswick and I'm glad I did, because nowadays all you see is CN, CP and Railbox.

Excellent point, Steve - I could fill an entire post with that piece of advice. I have a pile of failed photos to prove that point.

Nice thoughts, and nice photos too, Michael. After Trackside Treasure finishes basking in its five-year afterglow, I'll be posting Incentive Per Diem boxcars, of which the N&SL family (NRUC) loomed large.

I just realized this week that I don't think I have a single photo of a CN 3200-series C424, though I observed how-many-hundred passing by on the Kingston Sub.

I agree with you and the others that have commented. Railfanning with a camera is not only fun, but it can have historical value over time. With the rail scene changing rapidly, it's wonderful to have a photographic record of what once was. One slight negative; I don't think that St. Lawrence boxcar is a "waffle side". Terrific photo all the same.
Andrew Kerr
Modeling CP Rail Down Under.
Sydney, Australia

Thanks, Andrew! I did do a little research and you are right that the boxcar is not a waffle-side boxcar. Those cars have both vertical ribs and horizontal slats (for lack of a better term). I put this question to readers: is there a better term for this type of boxcar with the vertical lines?

The term exterior-post XM class would apply to these cars, Michael. A nice synopsis of boxcar types here:

And it mentions the waffle sides which were stamped.

In the background of that same photo of yours, there is what looks like a Bangor & Aroostook double-door boxcar perhaps like this: