RMEO Part IV: The best of the rest

Last summer, my family visited the Railway Museum of Eastern Ontario in Smiths Falls. I made sure to take photos of just about everything. In this post, I thought I'd share some photos of a number of pieces of the museum's collection that didn't merit their own post.

The car below is an oddity for sure, at least by today's railway standards. This 1947 Cadillac sedan was originally owned by a Toronto doctor. The doctor donated the car to his friend "Buck" Crump, president of the Canadian Pacific Railway. Crump promptly sent the luxury car to Montreal where the railway converted it into possibly the most comfortable inspection vehicle the CP had ever seen.

The car, numbered M-260, was assigned to the president and used for division inspections. There are some interesting modifications on this car. One is that the steering wheel was used for air brakes while the car itself was placed on a rotating turntable, which allowed the car to avoid needing wyes or diamonds in order to turn around. An air horn and bell were also added to this eight-cylinder, seven-tonne car, which has 32,000 miles on the odometer. I also love the CPR beaver logo on the driver side door. 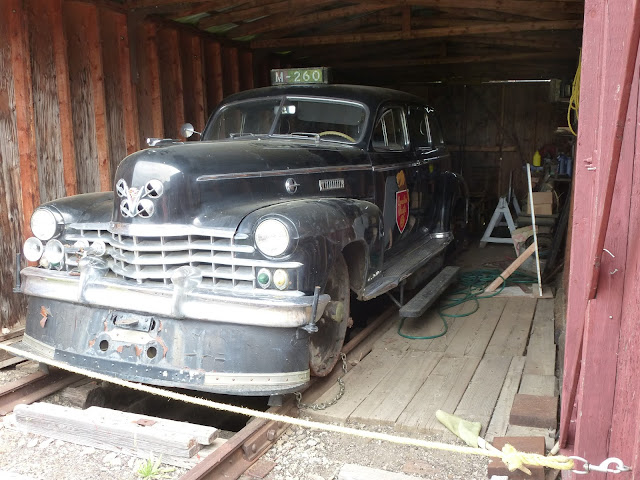 Canadian Pacific spanned the world at the time. 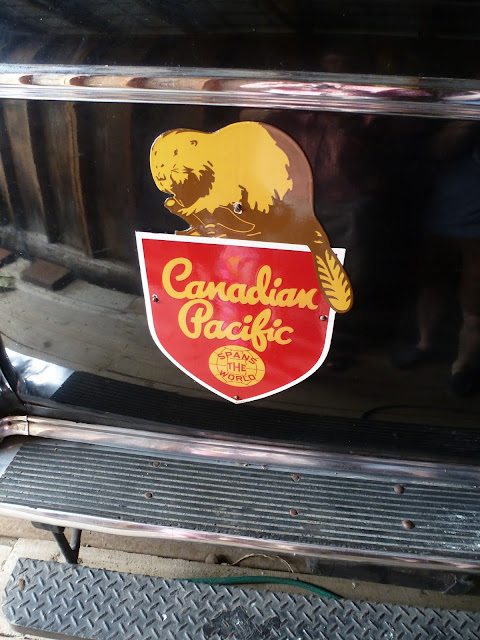 My nephew loved this locomotive, which I took him to see. This steam engine, built in 1912 for the Canadian Northern, was a 4-6-2 coal-burning locomotive later converted to oil. The locomotive was used for both freight and passenger service. It served in these two capacities for the CNoR and CNR until it was sold to the resource line Quebec, North Shore and Labrador, where it worked in revenue service until 1961. The locomotive was then donated to railway museum Exporail. In 1992, it was leased to the Smiths Falls museum, where it has been ever since. The museum had the engine laid out with a consist of two boxcars and a caboose. 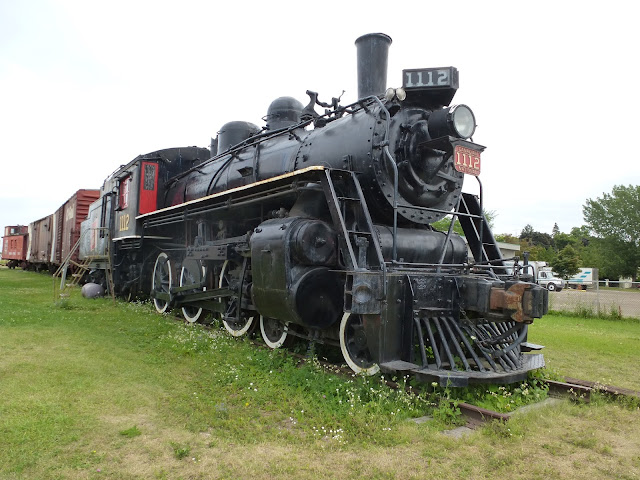 This wooden caboose below was one of 15 built by the Canadian National in London, Ontario in 1947. This caboose belonged to the last roster of wooden cabooses built by the railway. It was retired from revenue service in 1983 and was donated to a museum in Cornwall. In 2001, it was donated to this museum, where it was restored. It looked like it needed a fresh coat of paint, but the interior was immaculate. Despite the fact that it is a wooden caboose, this car has some modern touches, like an oil stove, rather than a coal stove. It also was equipped with air brakes. 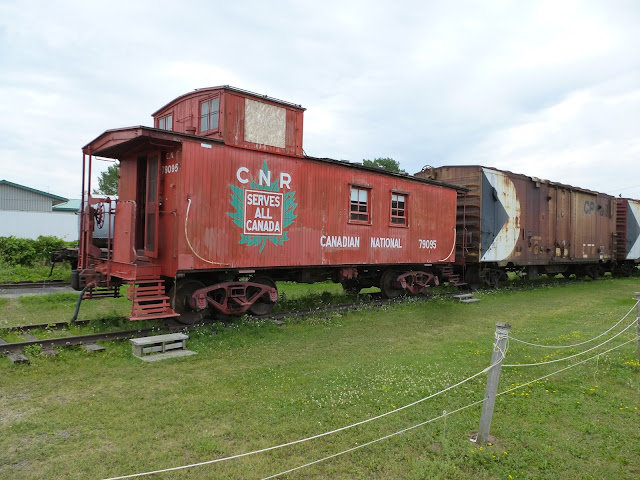 Inscription on this yellow boxcar (see shot above, in front of the CNR caboose) reads: "Insulated and Heated Car. For Cleaning Lading Only. Accept Bulk Commodity." 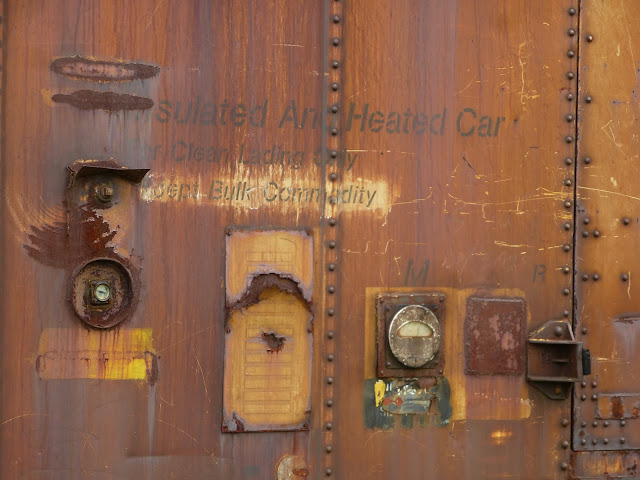 This plow was one of my favourites. One of the reasons is that it's such an odd looking car. The Goderich Exeter Railway still uses a plow just like this one to keep its lines clear, especially in the Huronia region. This car, 55400, was built in 1935 by National Steel Car in Hamilton. This plow worked by harnessing the power of the compressed air in the train's braking system. 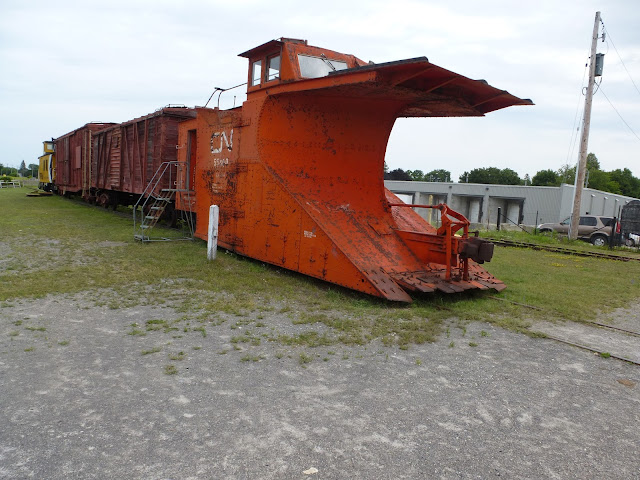 This shot gives you an idea of what it was like to sit in the cockpit of one of these cars. The three gauges you see read main reservoir, signal line and train line. I was surprised how simplistic the setup was when I climbed into this car. 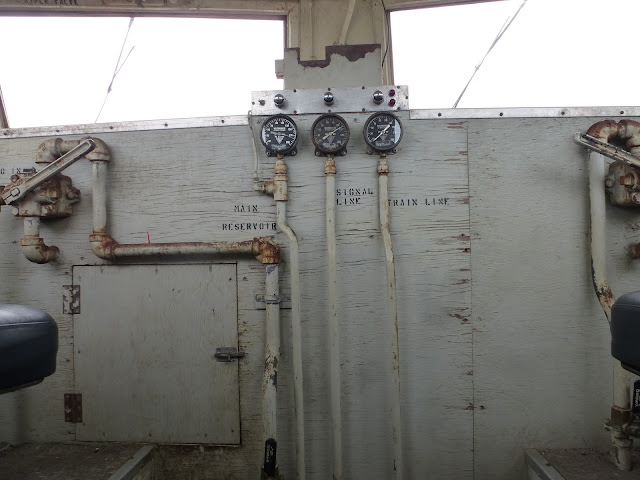 This old wooden boxcar was something of an anomaly. There wasn't much to read about it in the brochure the museum gives visitors. There was nothing on the outside to indicate the origin of this car. By digging a little, I found that this car was built in 1923 for the Canadian Pacific. There is little more out there about the story of this car. 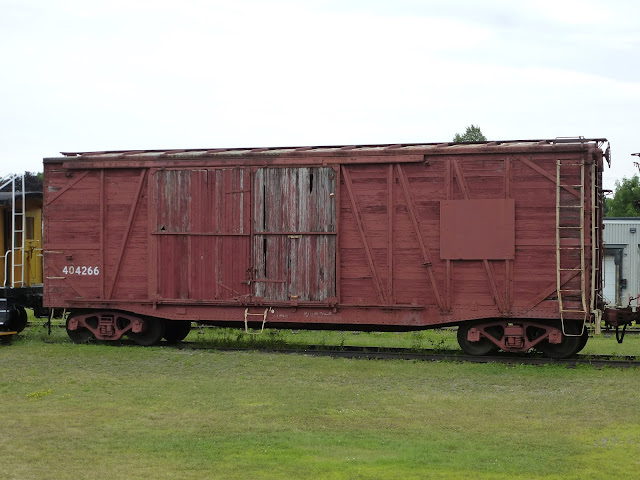 I did find it interesting that there was this door at the end of the boxcar, which suggested to me that this car may have been modified at some point for maintenance of way duties, although that is just a guess. 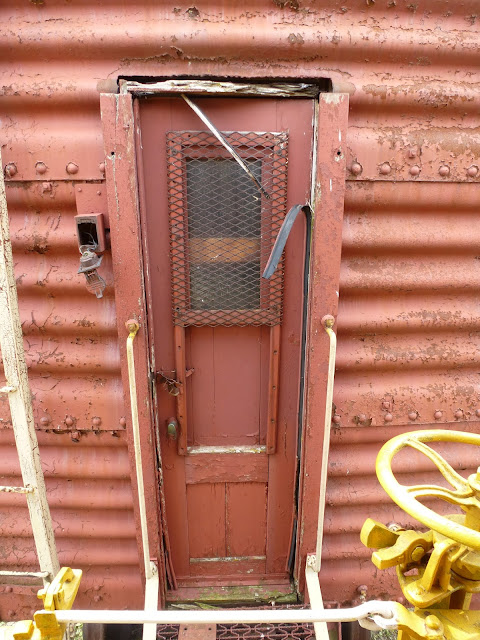 I spotted this tank car at the edge of the museum's property near a maintenance shop. It reads Casco on the side. It looked like it needed a fair amount of work before it was added to the permanent collection. 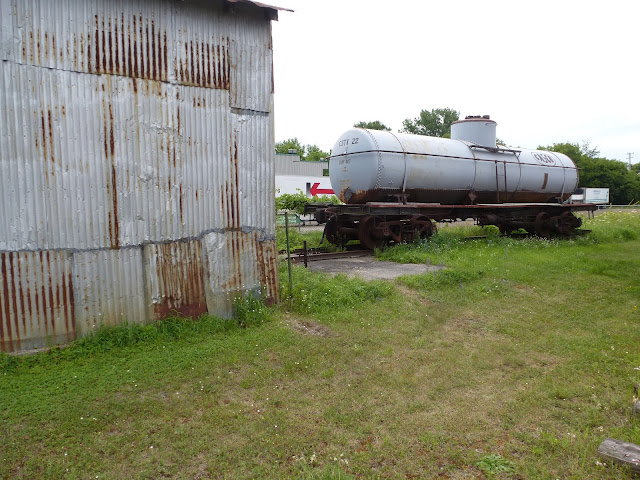 That concludes my four-part recap of one of Eastern Ontario's more fascinating museums. My family and I had a great time wandering the grounds and the restored CNoR station. Smiths Falls should be very proud of this museum. I know I will be back.﻿
Posted by Michael at Thursday, March 17, 2016

Yep, that CP 404266 boxcar was in Service service. End door is a giveaway. I believe the plate on the side may have held 'Canadian Pacific' script lettering which was applied to a lot of CPR service equipment before CP Rail and the multimark era.
Thanks for sharing these, Michael.
Eric

Thanks for dropping by, Eric. I think it's funny that, with everything that was on display, it was this plain old boxcar that really stirred my curiosity.