The good news is I finally caught CN's Arnprior local in Bells Corners, which has been on my to-do list for a while. The bad news is I just barely caught it and had to improvise to get a few shots.

The morning I caught it, I fully intended to set up a shot alongside the tracks on a stretch of Northside Road in Bells Corners. Unfortunately, I had a last-minute appointment scheduled for early in the morning across the city, which compressed my timeline somewhat. After navigating my way back to my neighbourhood through snowy conditions, I was driving down Northside, just past the bridge that carries the CN Beachburg Subdivision over Highway 416. As I made my way around a bend in the road, not more than a few metres from a parking lot where I was going to set up, I saw the train plodding along. I was about a minute too late to set up. On to Plan B.

I had my camera out so I pointed it at the train and took a few blind shots while focusing on the road. The consist headed to Nylene Canada in Arnprior was about as short as you will find. CN GP38-2W 4760 was pulling DNAX 300908.

I noticed a strange badge on the side of the tank car, which, upon further inspection, turned out to be Dana Rail Care. It turns out, DNAX 300908 is the reporting mark belonging to the Delaware-based company, which specializes in railcar washing and maintenance. I have never seen one of these cars before, so that made up for the fact that 589 only had a single car in the consist. Considering that I have seen this train in recent months (sans camera sadly) pulling as many as four cars, it was a bit of a let down to catch it with just a single car. 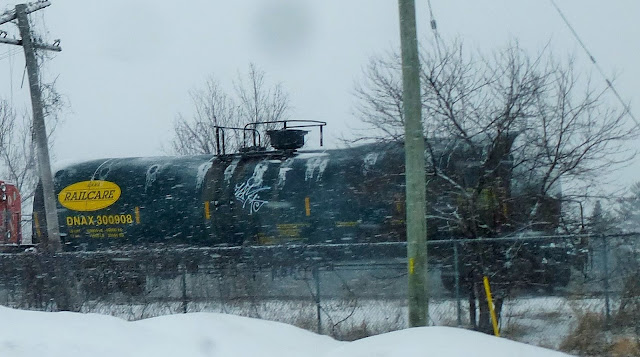 As the road and right-of-way diverged a bit, I was able to get some wider shots of the tiny train. It should be obvious that, if you are planning to shot a train in this area, summer is not a good time since there is so much brush and weeds growing along the tracks.

I was reasonably happy with my shots, especially the snowfall that I managed to catch. I have long thought that my collection of railway images was severely lacking in winter photos. I think I have managed to address some of that shortage in recent weeks.

I thought I would include this shot, which places the railway tracks in context. The rail line winds around the northern edge of Bells Corners, winding past a number of small-scale industrial and commercial facilities. Here 589 slips in behind a commercial complex before the trackage passes over Robertson Road.

I also though I would throw in this initial shot, which I took as I made my way around a bend in the road and first noticed the train. I left in the glare from the windshield, just to illustrate how quickly I had to try and grab some shots. I did end up with a few shots where road signs were blocking the view of the train. In this shot, I just barely squeezed in the train before some of the road signs began. 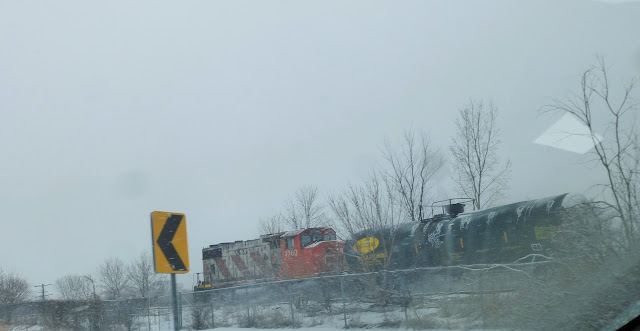 In recent weeks, I have found myself driving around areas that cross the Smiths Falls Subdivision and have noticed that one of CN's main customers along the line, Kott Lumber, has been ordering two lumber cars at its Moodie Drive facility. This is the first time I have noticed more than a single car at the facility. Further along the tracks, at the SynAgri feed mill, there have been no hopper car deliveries in recent weeks, which suggests to me that the mill will not need any rail service until the spring.
I also mentioned in the summer that bundles of rail ties have been left by the tracks, which suggested that track work was about to be done in and around Ottawa. Those ties are still sitting trackside, which means the track work is still to be done. It might be something for local rail watchers to keep an eye on as the spring weather takes hold here. ﻿
Posted by Michael at Thursday, March 03, 2016

Nice winter shots for sure! I like the one with the cars in the foreground the best.

It's hard to get winter photos but they are worth trying for.

Thanks, Steve. I did like how the shot turned out with the cars. I have learned over the last few years that getting shots from a little further from the tracks often results in more interesting photos.

Good catch on the elusive train which goes through the neighbourhood.

Thanks Dave. These shots are nothing like your shots of 589 in Carp, but I'll take what I can get.

That is a pretty unique tank car, Michael. Good chase.

Kott Lumber continues to capture my interest...mainly due to the VIA derailment there and the photo or two I've taken from VIA of the industry. And because it's still a rail-served industry.

Thanks for the comment Eric. I also find this facility quite interesting. Sadly, I think the timing of their weekend lumber car deliveries has changed from Sunday morning, which means I am not able to catch CN 589 on the weekends.

What time in the morning were you able to catch it? I have been skunked around there myself the last several weeks.

Any indication on what the new delivery day 589 is?

I'll keep an eye on the ties as well. I am curious as to what the plan is.

AJ- Thanks. I have noticed that 589 is coming through Bells Corners around 920 am most Wednesdays. That's what is happening right now. A few months ago, it was 830-840 am so you just never know. I'm not sure when CN makes its weekend run out to Kott Lumber on the Smiths Falls Sub. I think DaveM said he caught it on a Saturday near Fallowfield Station, if memory serves correct. Dave, am I remembering this right?

Thanks!
I'm moving offices in April/May so I want to see if I can duck out for an early lunch one of these weeks and take advantage of being close by while I can. 8:30 is way too early, but 9:30 might start becoming workable.

Yup, you are right. The last time I've caught the freight service to Kott was in the fall. It took the siding at around 11:30am on Saturday at the Fallowfield station going west. On the way back east, I caught it at 12:00 crossing Woodroofe.

I did catch it at Kott that day while it was dropping off the car. I probably took around 20 pictures or so there, but none of them turned out. I've found that location challenging to get a picture from due to the many obstructions.