The sizzle and the steak: The Arnprior Local caught

If all the chatter about the elusive Arnprior Local train is the sizzle, may I humbly present the steak. Yes, after years of talking about it, I managed to find the time on a recent Wednesday morning to wait for CN 589 on the Beachburg Subdivision as it made its way toward Arnprior to service the Nylene Canada plant. You can read the particulars about this train here. You can also read about my near miss moment with the same train here.

Now, I'm not going to pretend like all the shots below are the definitive shots of this train out there, but they are the best I have to offer so far. The first shot is looking south to a point where the east-west rail alignment on Beachburg turns north so the line can cross under Highway 417, or the Queensway as it is known locally.

I was perched at the level crossing where the line meets the Trans-Canada Trail. Below you see a long shot of the train making the turn. 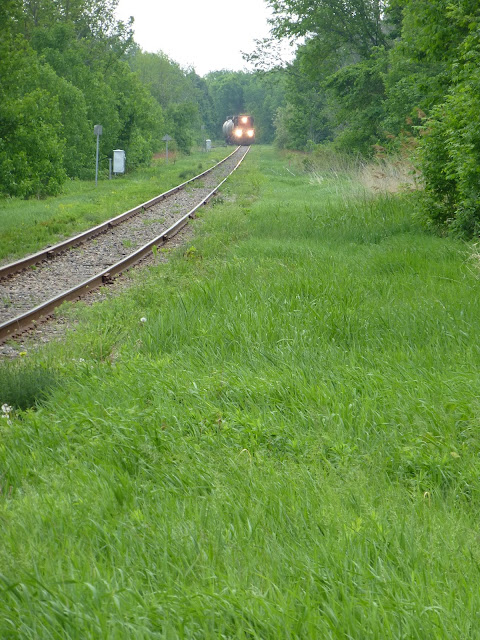 Here's a closer shot. You can see the engineer and the conductor looking out as 9418 trundles toward Arnprior long hood forward. Lots of spring foliage encroaching on the ballast in this spot. This part of the subdivision crosses through the Greenbelt.

I'm sure the crew was wondering, 'A railfan? Man, must be that blogger.' I'm sure they can count the rail fans in Ottawa on one hand. 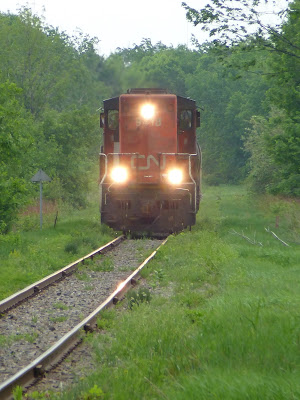 Here's where things get interesting. As the train approached the crossing, I noticed something on the side of 9418. Can you make it out in this shot? 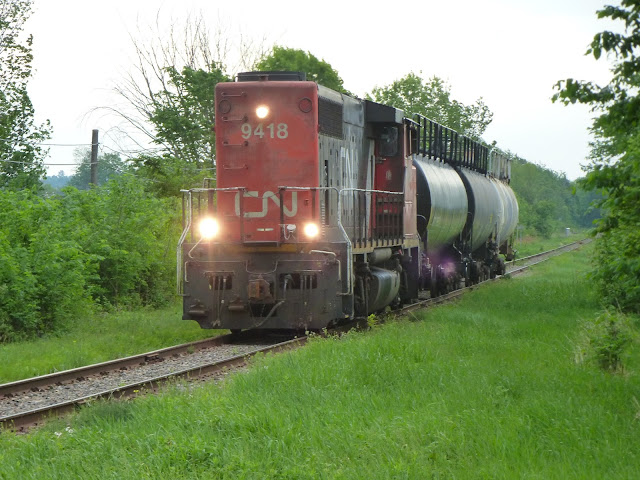 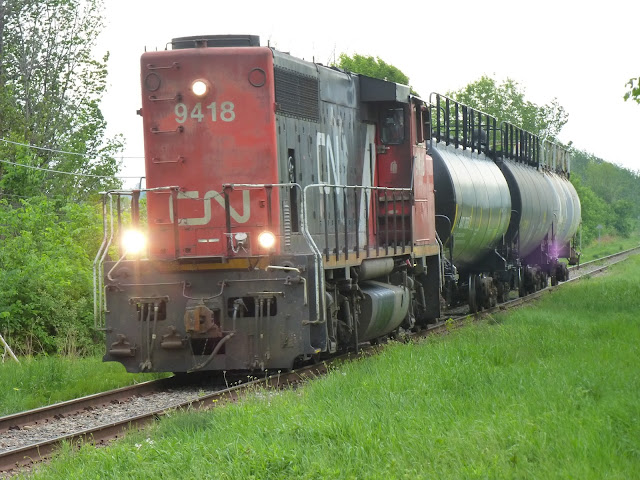 Okay, here it is. This is a CN North America-painted geep! As I mentioned in an earlier post, these are not all that common, although a few readers told me they are still more plentiful than I thought. Still, it's the first time I've seen one in Ottawa in my time watching trains. The livery looks to be in pretty decent shape. 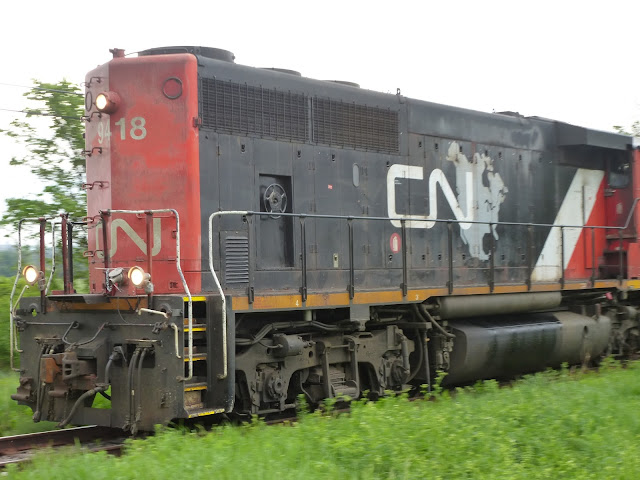 I wanted to capture some interesting shots of the train heading under the Queensway. This vantage point allowed me to capture a few decent going away shots as the train rounded the curve. Beyond the highway lies the Corkstown Road level crossing followed by a short stretch of track before Beachburg gives way to the Renfrew Spur at Nepean Junction. This spot, where the spur and Beachburg separate, is a junction mainly in name only now. Most of Beachburg beyond Nepean has been removed, although I suspect the CWR train may return at some point this summer to gather up what's left of the subdivision that's still in place through northern Kanata and beyond. 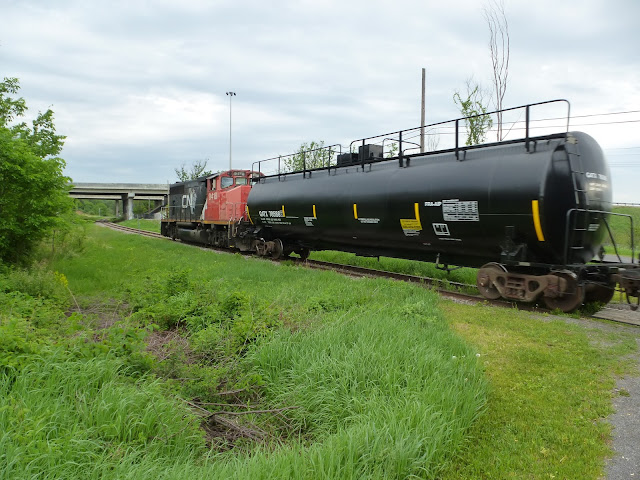 Here's another shot with a little more tank car showing. 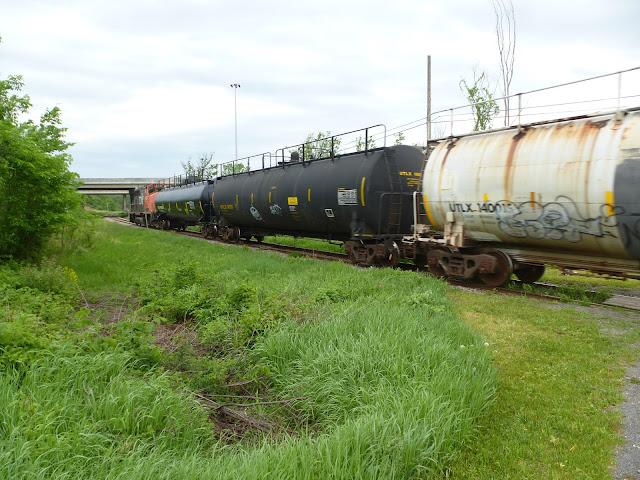 After the train passed me by, I crossed the track and took a shot from the other side of the crossing. The cloud cover really helped me with the shadows. You can just make out a few cars rushing by on the Queensway above the train. 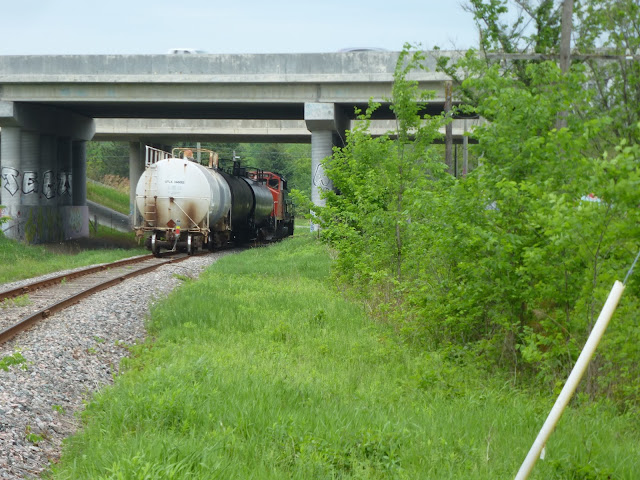 So, those are the highlights of my meet with this train recently. I would love to catch it again, but I have to find a Wednesday morning or afternoon when I have the time to wait for it. While I was waiting, a few women walking along the trail asked if I was waiting for a train. I guess rail fans are a rare sight. While I was waiting, I did try to capture a few shots of a goldfinch that was hanging around, but he was not co-operative.

It was a lot of fun to catch the train here. I would recommend this spot to anyone interested in shooting the Arnprior Local from a safe place. As you can see from the top image, the vantage points are great and the long straightaway before the crossing gives you lots of time to prepare your shot. I was briefly considering naming this crossing as an Ottawa hot spot but since the frequency of trains is two per week, I thought better of it.

Sometimes the lack of sun is a good thing - you get any angle you want..

I agree, maybe not a hot spot, more like a cool spot.

You need to chase it all the way to Arnprior.

Nice catch!
I was at the spot yesterday afternoon via Corkstown but I got there too late (3:55) in the afternoon and I expect that it had long been gone. Did scout it a bit for future reference. Didn't go as far as your vantage point - I know there is a road there (well I assumed more of a driveway) but haven't checked into getting there with the car.

As for the NA scheme - very surprised to see that and disappointed I missed it. I wonder what is happening with the GP38's or the GP40 that I have caught the last couple of times?

Good catch from that location. I've always wanted to catch it there.

Great catch! That spot has been on my to do list. It's very convinient that the Trans Canada trail actually follows the tracks much farther towards Nepean Junction. I'm very thankful for the NCC and the greenbelt here in Ottawa.

Thanks for the comments, everyone. I was happy with the meet and was satisfied that I didn't need to chase it to the 'Prior. But maybe I can add that to my to-do list. Anyone else that catches this train, feel free to share your story or pics!

Great post, Michael. Glad that your luck was good. This little train has garnered lots of discussion, which is great!Railfanning truly is where we find it.
Eric

Skunked again for the second straight week. Been trying to sit at the 417 overpass between 3:45 and 4:30ish but have seen nothing more than cyclists and runners.

I caught it today in Carp. I got photos. How can I share with the readers?

If you'd like to share photos, you can contact me directly at hammond.michael77 at gmail. I'm always happy to hear from fellow fans in the city.

Thanks Jeff. With being off at 3:30, looks there was no possible way I would have caught it

That is odd. I wonder if they will be overnighting it there and be back tomorrow?

Oh well, glad I was running late and didn't bother getting trackside today!

Jeff! Thank you for confirming this. It puzzled me quite a bit. About 6 weeks ago (approximately) I saw 589 heading west in BC at about 4:00 PM. Then, as I was just about to go to bed, I heard it returning loud and clear at about 11:15 PM. I didn't think anything of it because I thought it was too unlikely. My new goal is to catch this train at night. Michael, on a side note I forgot to ask you if the signal lights work at the Trans-Canada Trail crossing that you were at to catch this train.

A number of people noted that the local was headed west late on Wednesday. I'm hoping someone in the know might be able to enlighten us. And, to answer your question Michael, the signals at the Trans-Canada Trail level crossing were indeed working the day I caught 589.

Caught it on July 8. It was in Arnprior at 2pm, and I heard it through Bells Corners around 6pm or a bit later.

I just found your blog - excellent work! I suspect there are more rail fans in the area than just a handful. I don't get out much to explore, but I enjoy seeing photos such as the ones you've posted, and reading the history behind them. Keep up the good work!
Dave

Always happy to welcome new rail watchers to the forum. Thanks for your comments, Dave!