The path through the downtown: the Point Edward Spur

I have written a few posts about a curious little spur through downtown Sarnia called the Point Edward spur. The line used to go into Point Edward, a small village surrounded by Sarnia, but today is ends at the Cargill grain elevators on Sarnia Bay. The line winds through city parks and parallels Front Street, making its way around office buildings, a band shell, condos and a number of other things in the downtown.

I was lucky to receive some photos from my brother Marc who was in downtown Sarnia on April 27th. He happened to have his digital SLR with him when he heard a nearby horn, telling him that the CN local was making its away along the spur, which hugs the St. Clair River in different spots. The train was making its way to the Sarnia Yard. 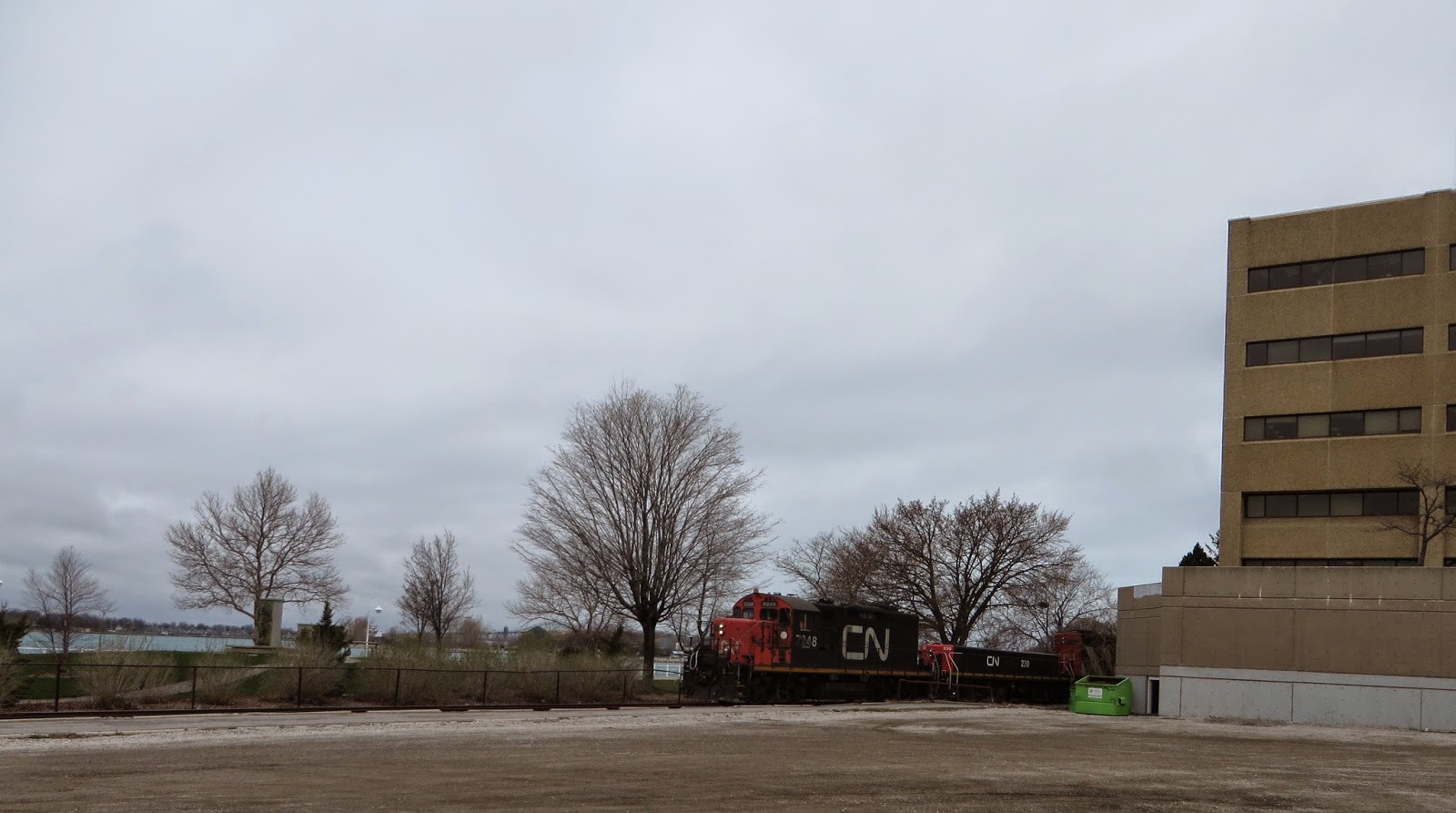 The first shot above, shows the local returning from the grain elevators, with 7248 on point, being aided by a slug and safety scheme-clad 4136 sitting third. 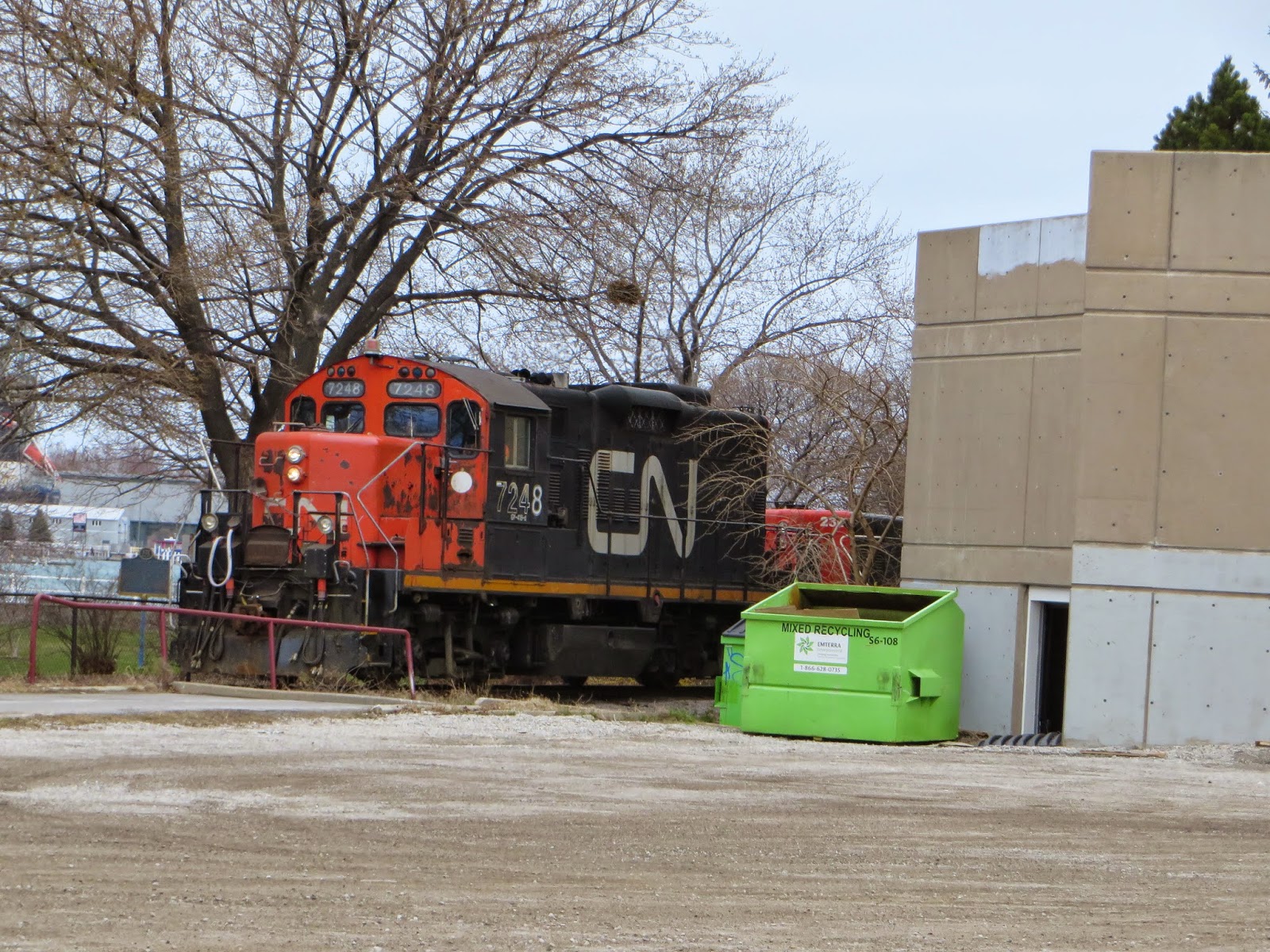 Here's a closer view. You can just make out a piece of Sarnia's government pier to the left of the lead unit, which is where the grain elevators are located. 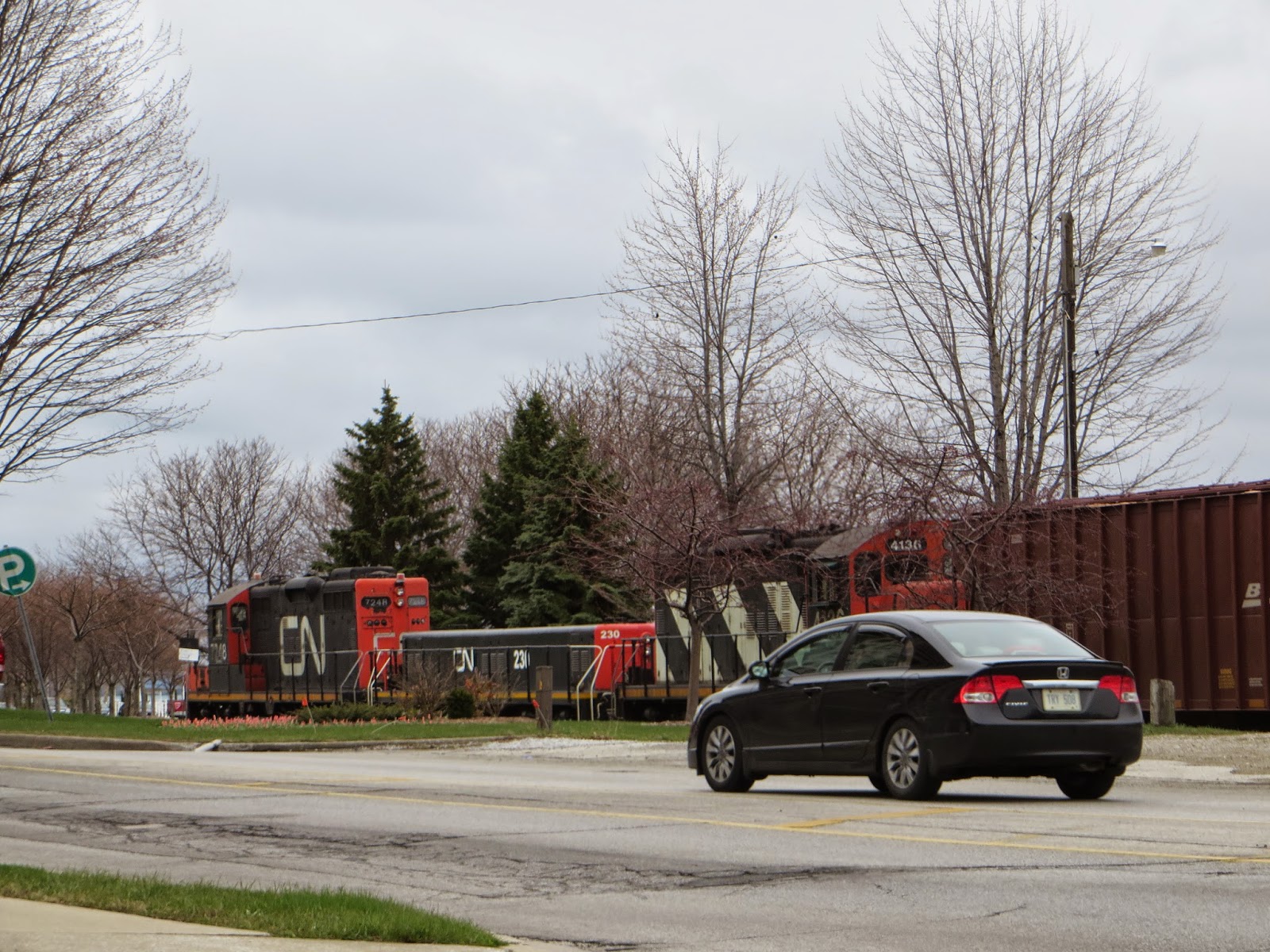 One final going away shot shows how close the track runs along Front Street in the downtown, with no fencing. The shot also gives you an idea of how the line is at street level for much of its run. You may also notice that the flowers were beginning to bloom in southwestern Ontario way back in April. Up here in Ottawa, we were only beginning to see the first hints of the crocuses (or croci? I've seen both usages) at that time.
You will also notice the covered hopper trailing behind the motive power. CN maintains this spur solely to service the Cargill elevator. The facility has two tracks where hoppers are spotted to take on grains, oilseeds (canola for example) and fertilizer, that are dropped off at the elevators by cargo ships. The elevators handle 500,000 tonnes of grain and 100,000 tonnes of dry fertilizer per year. That equals out to 30 freight ships docking at the elevators last year. CN movements to this elevator vary, according to the season and the amount of product to be offloaded. Here's a shot I took of some hoppers being loaded in December 2013. 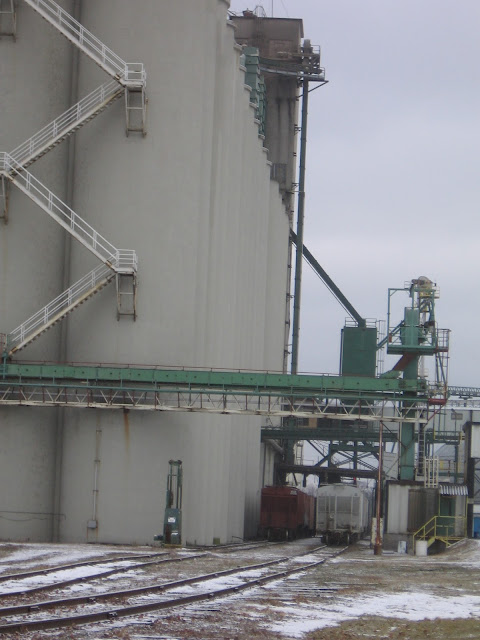 Those who checked out my previous posts about this line will notice that the motive power on this line has changed over the years. In the 1990s, this line was served almost exclusively by SW1200 switchers, but that has changed as these old engines have disappeared from Sarnia. Another big change is that the line no longer hosts a small rail yard for ferry consists, since the ferry was retired when the new St. Clair Tunnel was opened in 1994. You can see the remnants of that old rail yard behind a downtown park (see map below). Nothing has been done with this land, although many different proposals have been floated about for its future use.
Here's a quick map I sketched out with the help of Google. See the legend below for an explanation of the arrows. 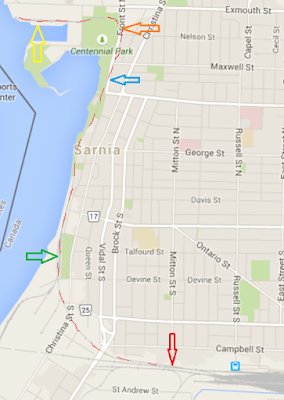 Nice description of the spur!

BTW 4136 has sergeant stripes but definitely no Draper taper. Those are only on Dash-8s and SD60Fs now.

Thanks for the catch, Steve. I'm scratching my head to figure out just what I was thinking/doing when I wrote that. I think I might have been cutting and pasting text or just confusing terminology. Yikes...