I have always been fascinated with railway bridges. Over the Christmas break, I was able to catch a CN train trundling over a railway bridge that crosses Highway 401. Looking at the photos of this meeting made me think about all the bridges I have photographed over the years and their importance to their successive railways. In some cases, old bridges have taken on new life as vital pieces of recreational trails.

So with that, here is a small tour of Ontario's railway bridges. First stop is Ottawa.

The bridge below crosses over Carling Avenue along the mostly dismantled Beachburg Subdivision just west of Nepean Junction. This bridge, which still bears its old CN logo, once supported transcontinental freight trains, when Beachburg was part of CN's northern national route. It's now a rusty relic, destined to be part of a recreation trail, no doubt. This shot was taken Nov. 9. 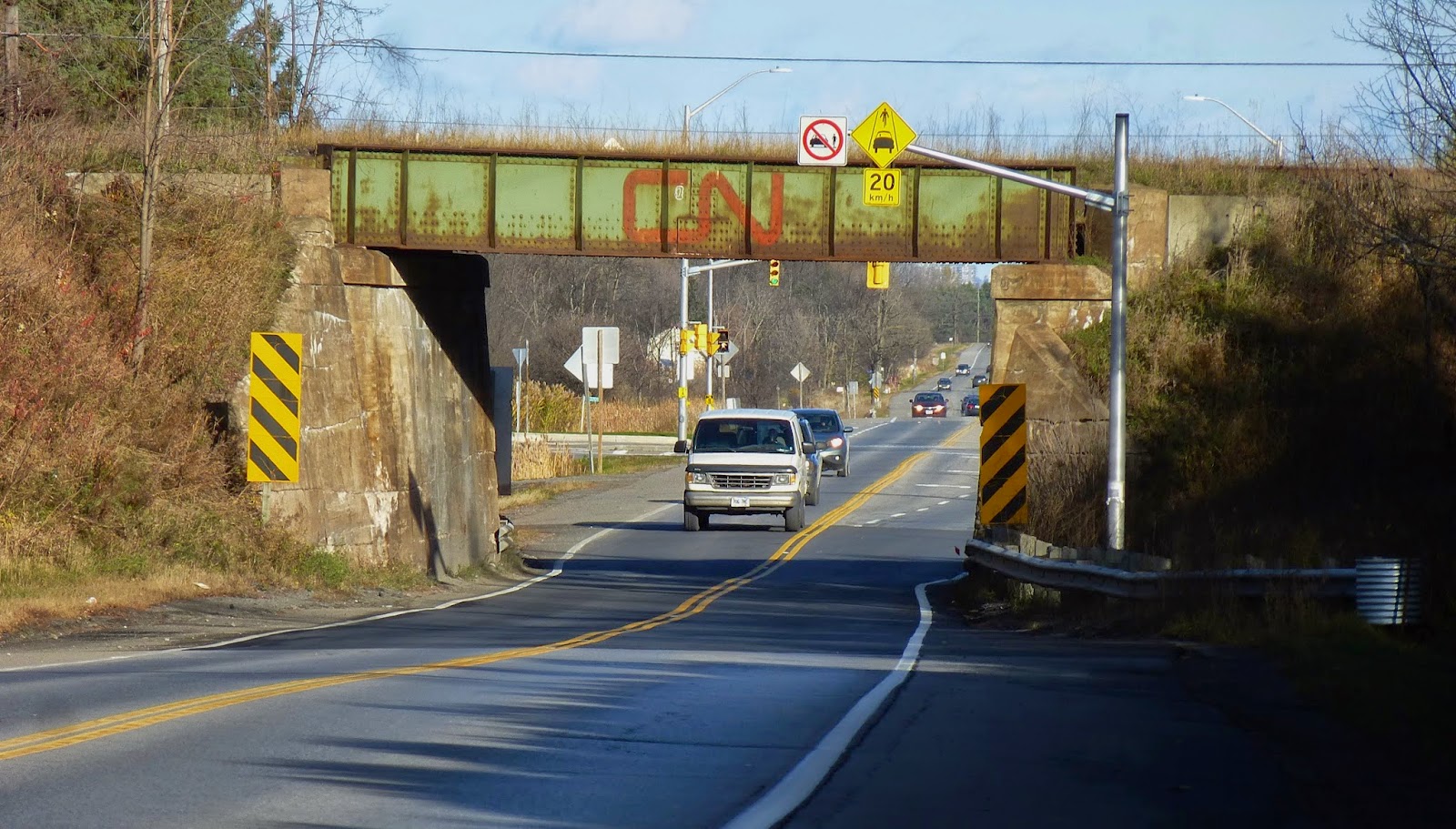 The span below is part of the Goderich Exeter Railway's main line, just outside Clinton, Ont. Unlike the CN bridge above, this one has an older feel. Notice the old stone work and the narrowed highway lanes. This type of bridge is a throwback. The narrowed highway lanes speak to a time when this road was clearly not a major route. But, over the years, the road became a highway, but the road still accommodates the rail line, not the other way around. This shot was taken early one foggy morning last August.

Clinton is an interesting spot along the GEXR. The small town, hometown of famous author Alice Munro, has a small rail yard and a wye junction where the GEXR's main line between Goderich and Guelph branches off south to feed a secondary line to Exeter and Centralia. 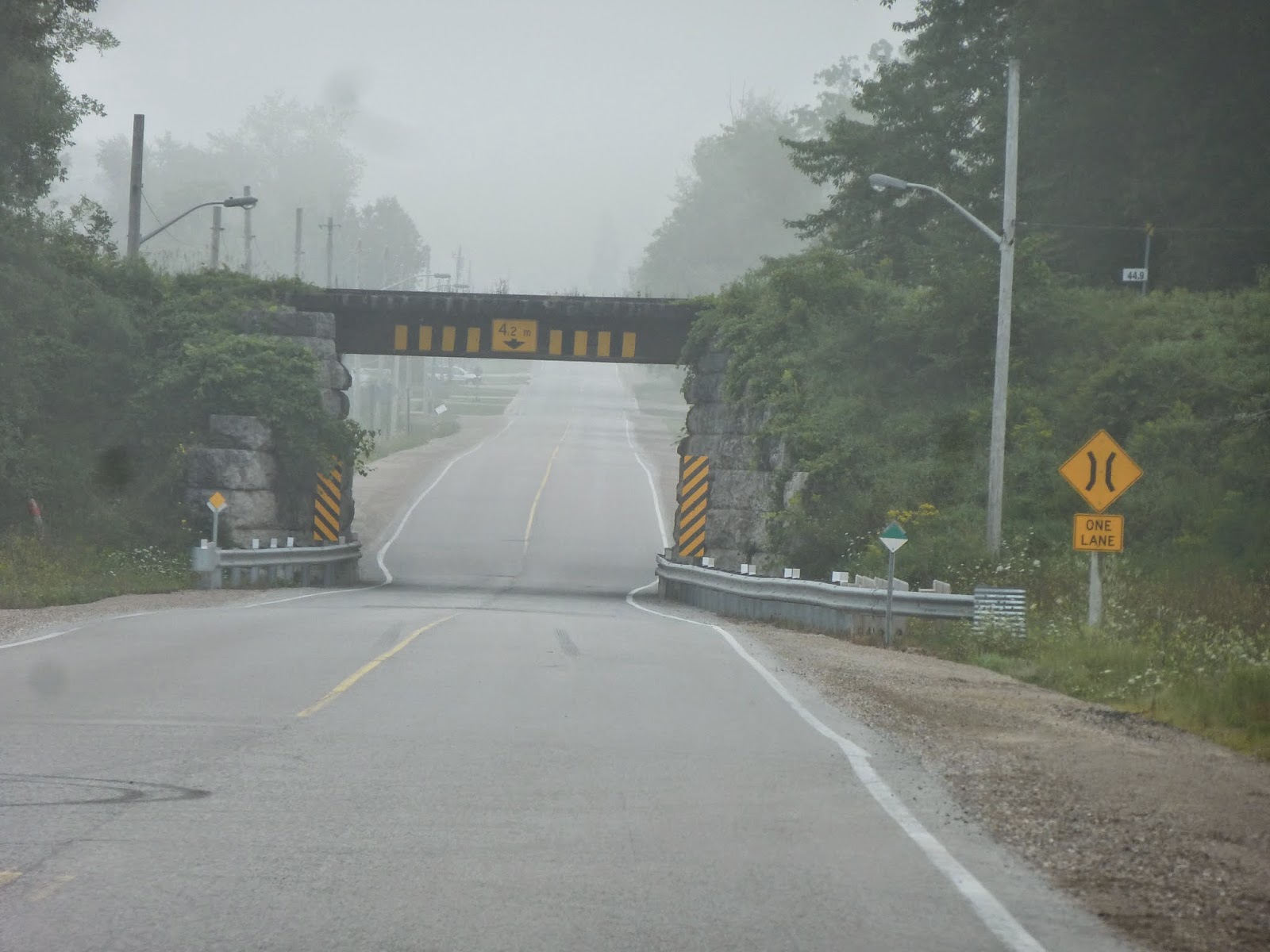 This next shot shows a former CN bridge along the railway's old Forest Subdivision, between Sarnia and St. Mary's, Ont. This bridge, over Perch Creek in Bright's Grove, is part of the Howard Watson Nature Trail in the Sarnia area. The nature trail runs the length of the old sub in the area and connects Sarnia with a small community north of the city called Camlachie. I will have more about this interesting old subdivision in a later post. Special thanks to my brother Marc for taking this shot in November. 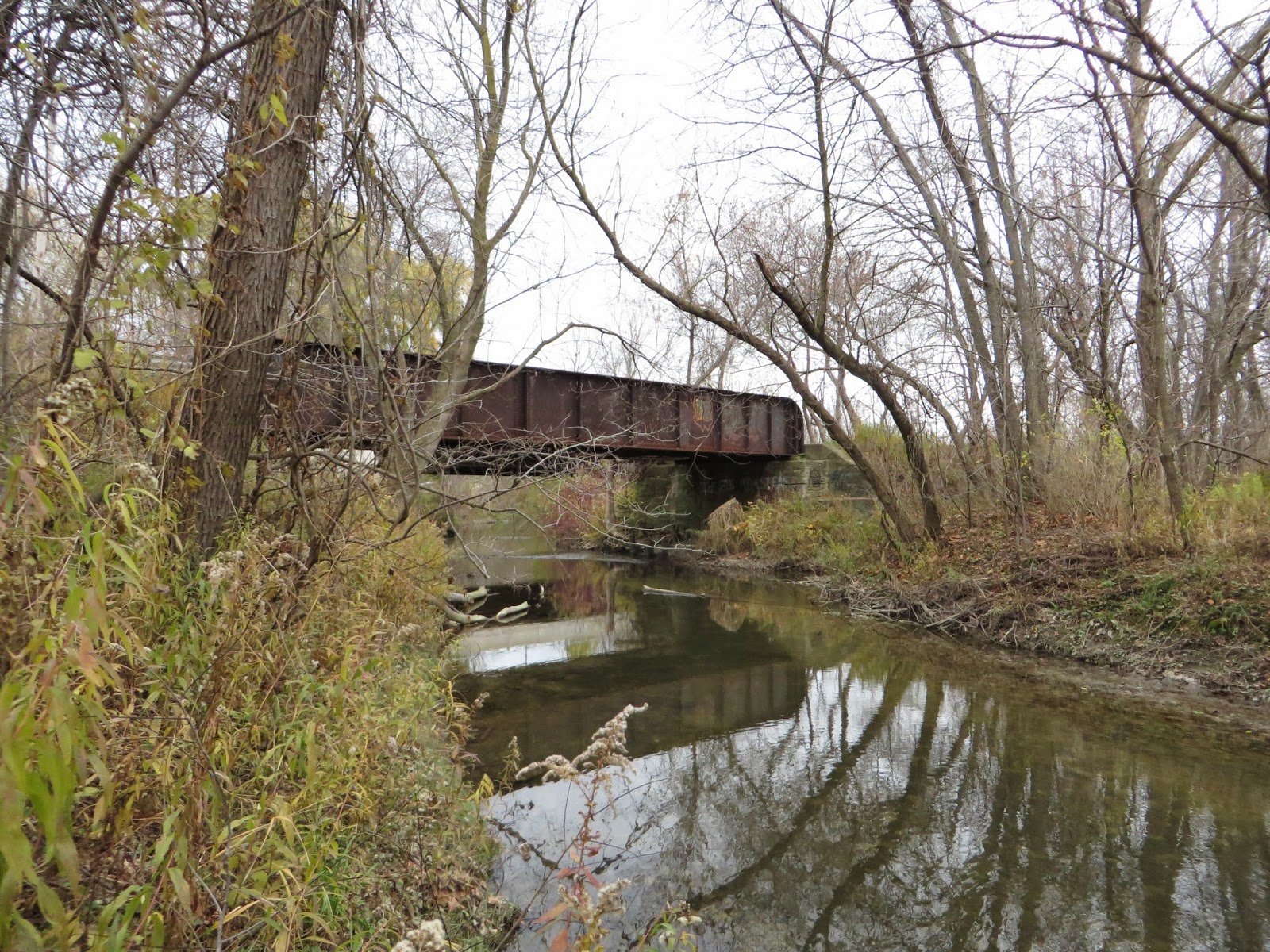 This bridge below is one of the most scenic bridges I have cycled over. It is located on the Trans Canada Trail west of Peterborough along former CN trackage. This portion of the trail spans 40 km of the old rail line, which crosses some of the best scenery you will find in Ontario. One day in the summer of 2004, I decided to go for a very long bike ride on the old trail to see if I could make it to Omemee (famous as being one of the towns laying claim to Neil Young). I didn't make it that far, but it was an incredible ride.

I am always concerned when rail lines are abandoned, given their strategic importance now, but this bridge represents a truly a happy ending for a disused rail line. I would love to tell you exactly where this bridge is located, but I didn't leave any note in the photo, so your guess is as good as mine. You can see the old roadbed far off in the distance in this shot. That's my old bike in the foreground. 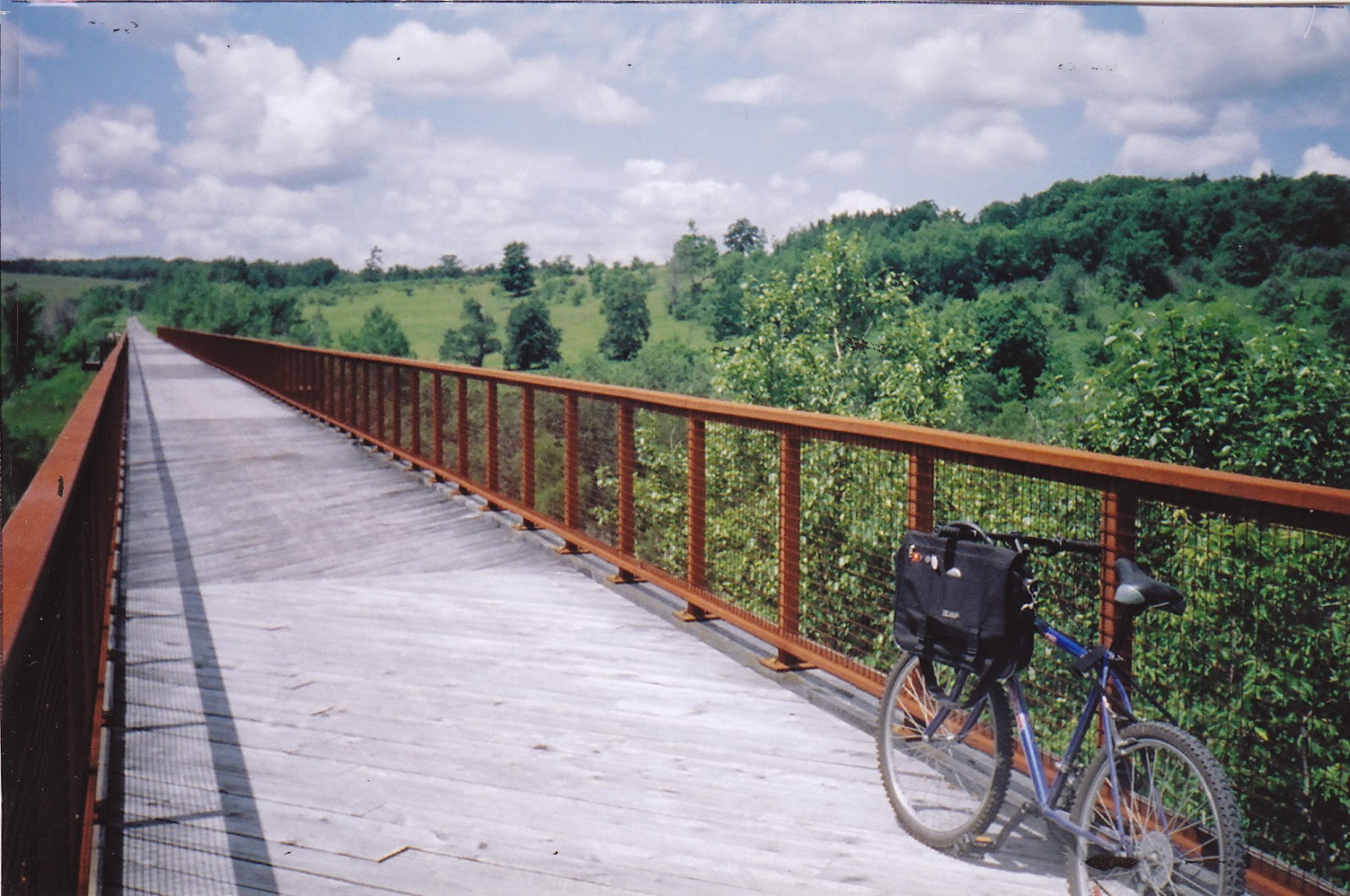 Is there a happy ending for this decrepit old bridge? I'm not overly hopeful. This bridge is just north of the Prince of Wales Bridge in Gatineau, Quebec, where the Canadian Pacific's Lachute Subdivision once ended. This area is technically the end point of the Quebec-Gatineau Railway, which re-established service to Gatineau recently.

The weed-covered tracks in the bottom of the photo are still intact and lead to the old Maniwacki Subidivison, which once housed the Hull-Chelsea-Wakefield steam train. That trackage is owned by the municipalities in the Outaouais Region, but given that damage from a storm several years ago has never been repaired on this line, the chances are that the old Maniwacki Sub is likely to have reached its end. This spot has not seen action in many years and my guess is there is trail potential here, at least for the old right-of-way that includes that bridge. I should mention that, when I wandered here in August 2013, I noticed that many of the old rail ties on the bridge had either rotted away or fallen off the bridge. I am surprised that nothing has been done to secure this dangerous spot. 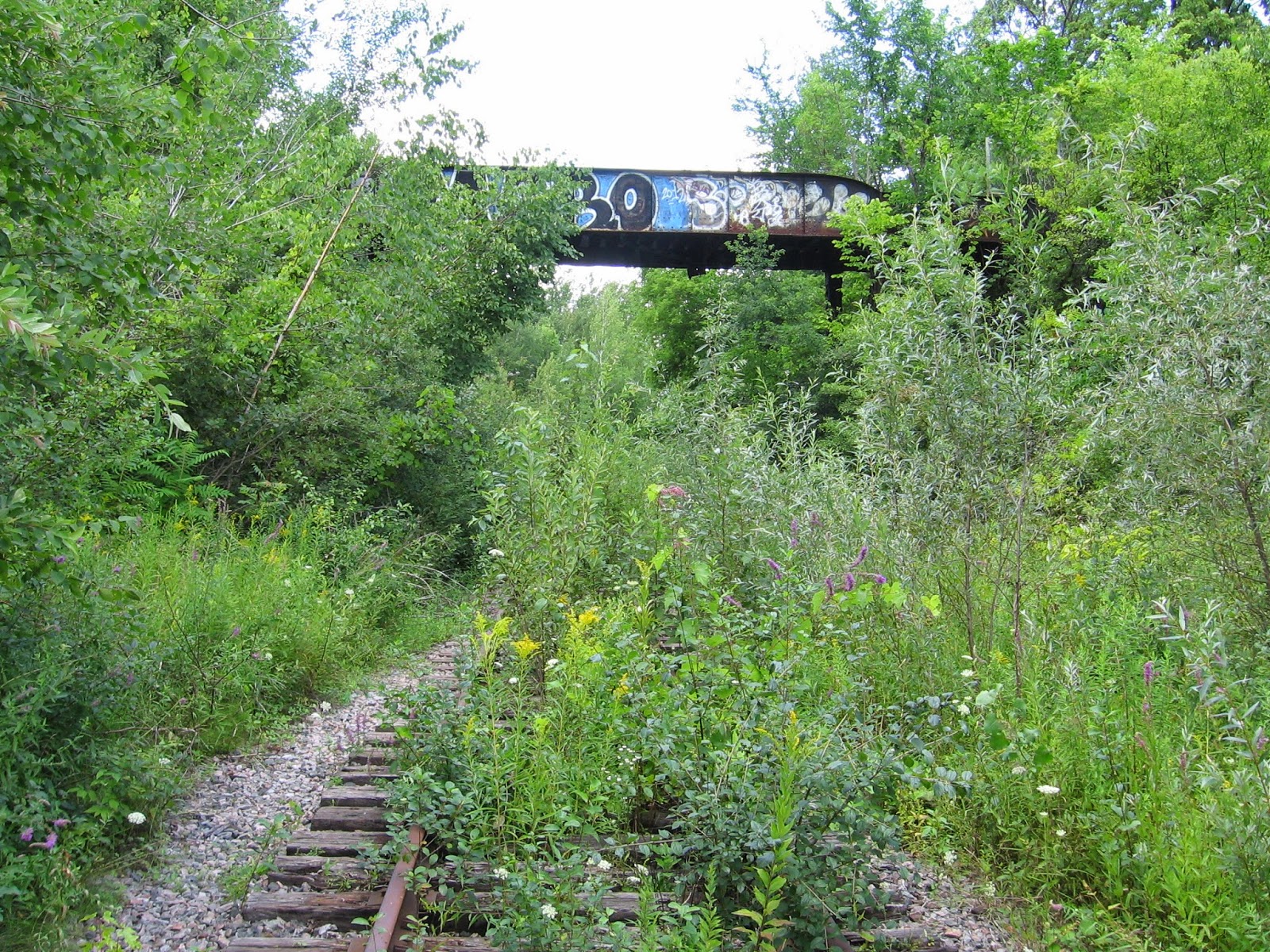 This bridge, of course, is a familiar site to readers and to rail fans in Ottawa. This is the Prince of Wales Bridge, connecting CP's old Ellwood/Prescott Subs to the Lachute Sub in Gatineau. The rails on the bridge are still in place, although the old Ellwood Sub, now part of Ottawa's O-Train's line, has no connection to the bridge. You can read more about this bridge in this post. This shot was taken on a beautiful July day in 2013. I'm hoping this bridge will one day see rail traffic again, perhaps in the form of commuter rail between Ottawa and Gatineau. I'm still waiting to local politicians to wake up and realize what an asset they have in this bridge. 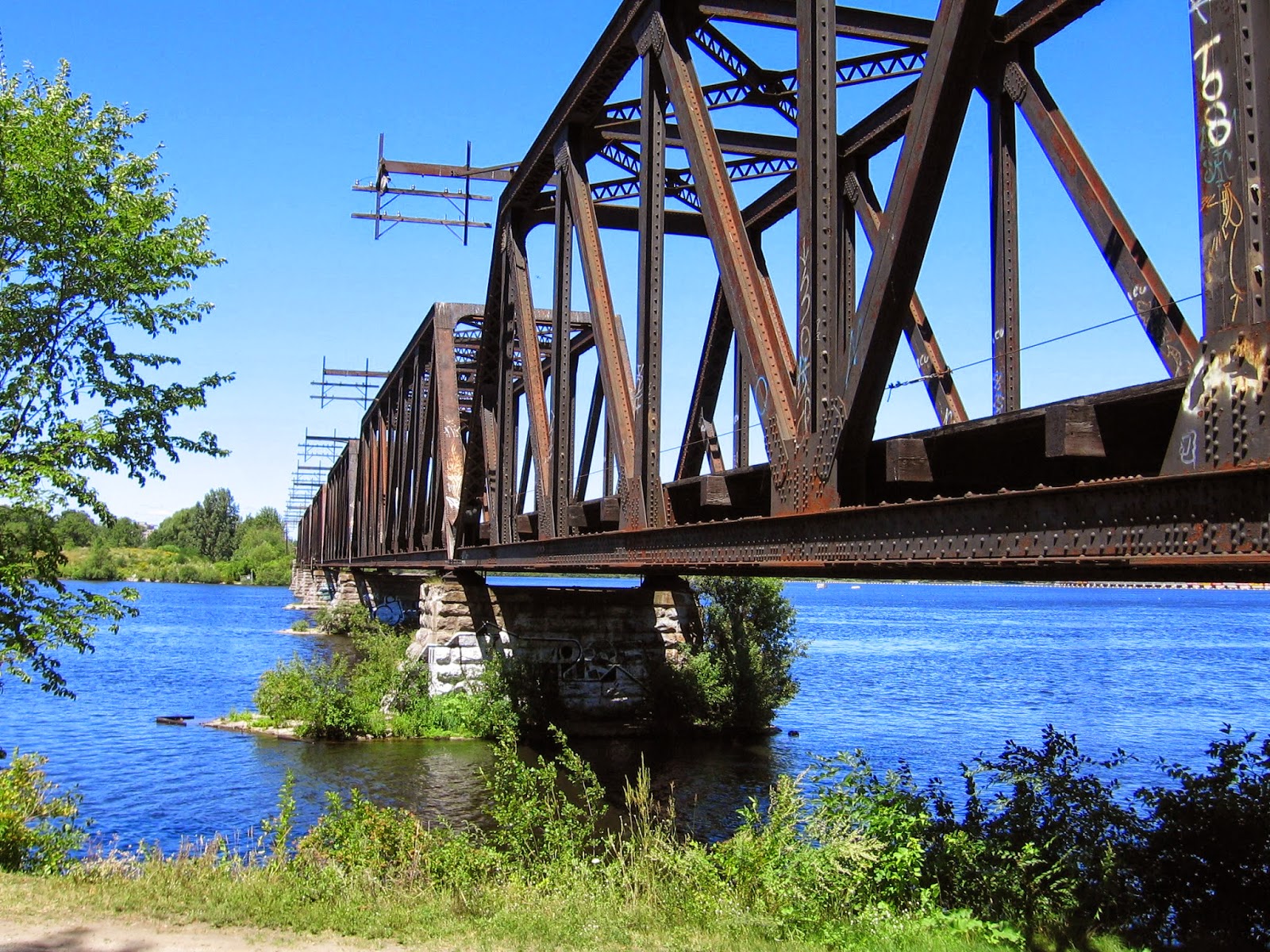 The bridge below, was featured in a post last year. It is a picturesque span that carries the Capital Railway (O-Train) over the Rideau River near Carleton University. I took this photo last April 25 in the midst of the spring thaw on the river. 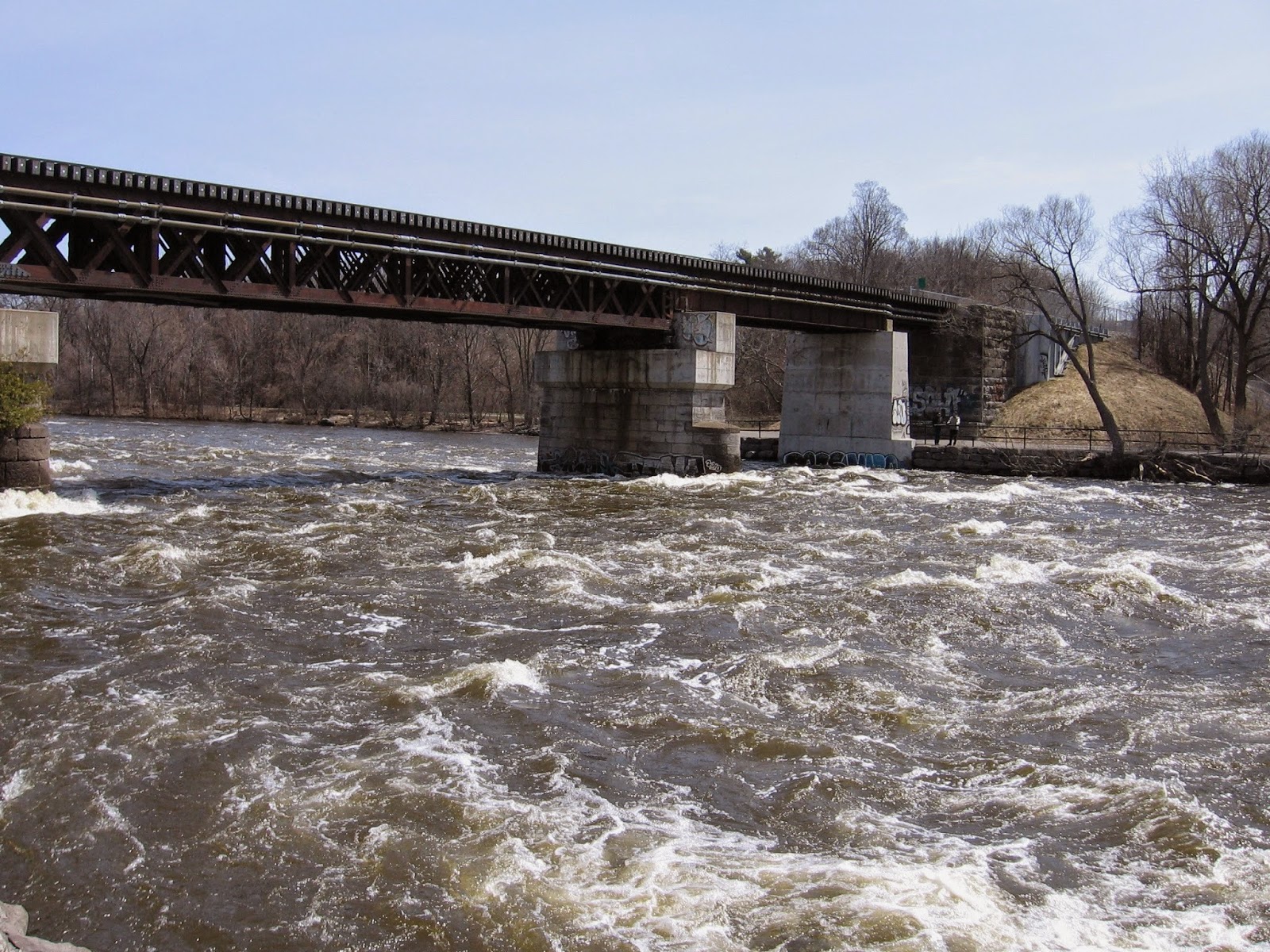 I also featured this bridge in a past post. This is a towering bridge along the Goderich-Exeter Railway line through Kitchener. This bridge spans the Grand River and sees a fair bit of action each day in the form of freight trains, Via Rail corridor trains and GO Trains. I took this shot while on a bike ride through Kolb Park in 2008. 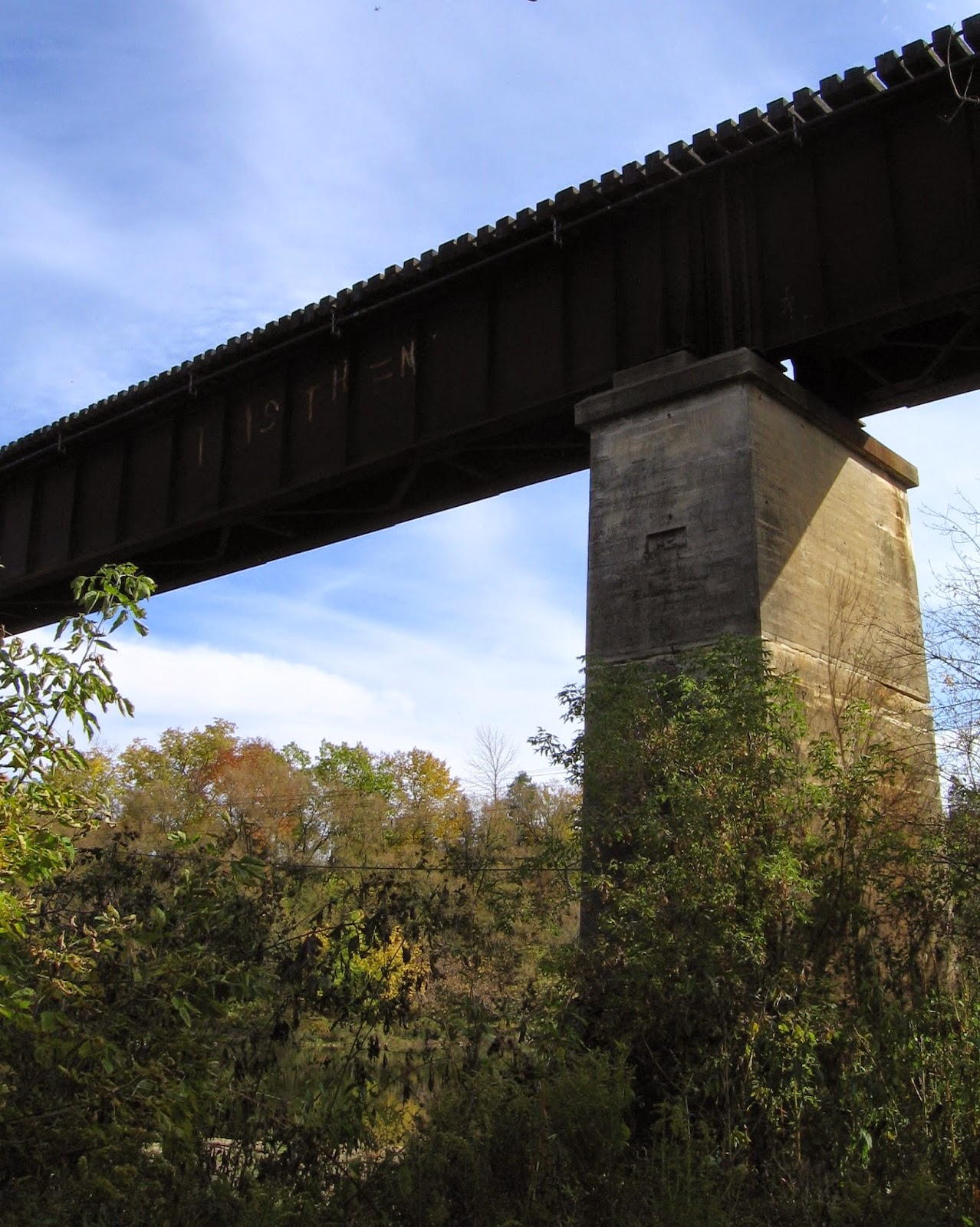 Of course, it's always better to see bridges in use. This bridge below is one of my favourites spots in Ottawa to watch trains. This span crosses the Jock River on Via Rail's Smiths Falls Subdivision near Moodie Drive in west Ottawa. I have shot lots of passenger trains here as well as CN's 589 local, which still serves two customers in the area. This shot was taken in August 2013. The train is Via's 657 en route to Toronto. You can read about this bridge here. 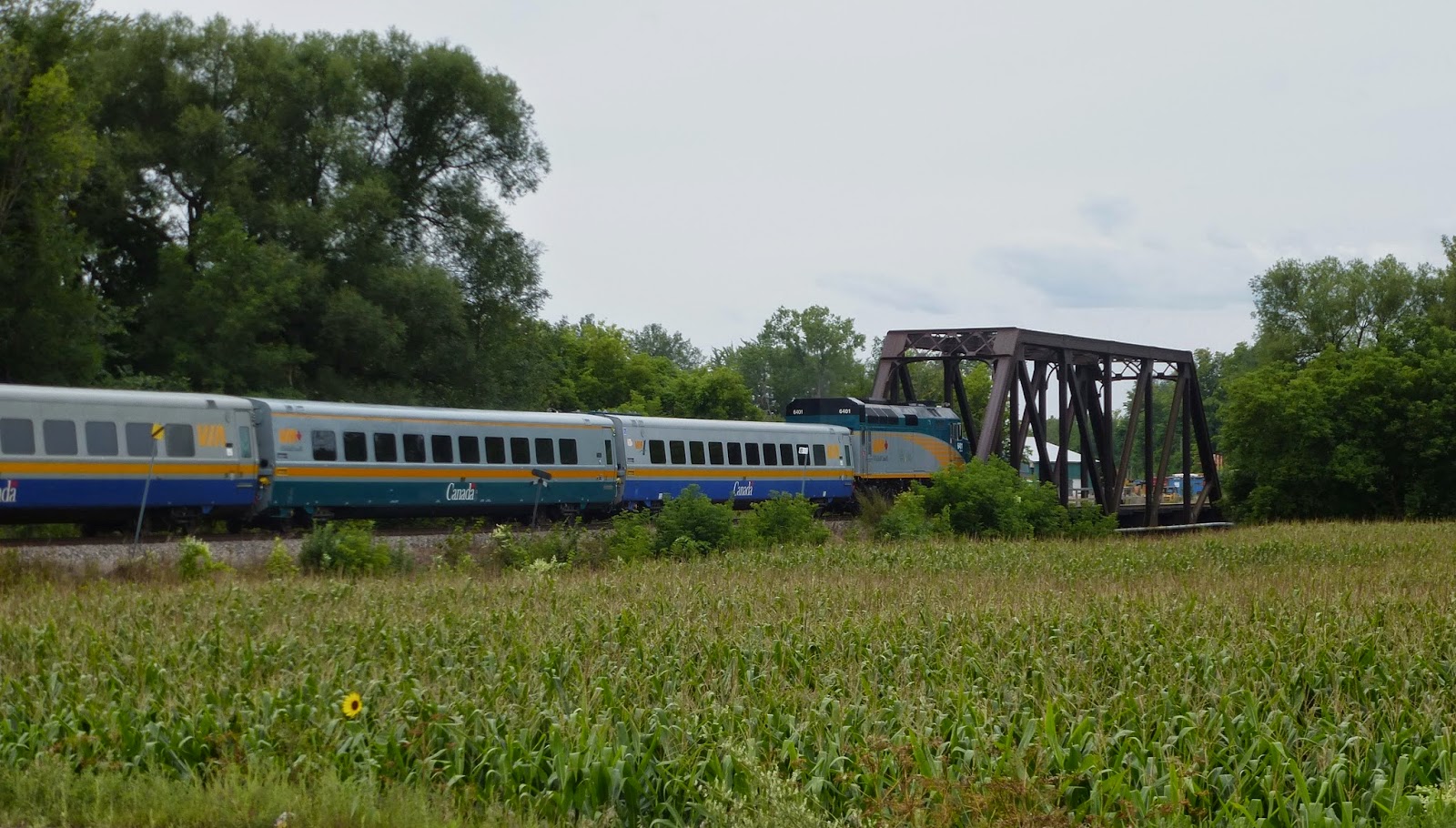 Okay, finally. On to the main course. This bridge below, which is a curious combination of styles, crosses Highway 401 in Pickering, east of Toronto. I snagged this shot while travelling eastbound on the 401 (I was in the passenger seat). I'm guessing the mix of styles is the result of the railway having to accommodate the widening of this highway over the years. These shots were taken Dec. 27. The train had a nice mix of cars, although the shot was a bit blurry, due to the various challenges of shooting through a windshield of a car travelling at 100 km/h or more.

This shot turned out a little better. I was surprised that such heavy duty power was pulling such a small consist. This train had no more than 20 cars in tow.

As the bridge crosses the 401, the rail line turns and begins to run parallel to the highway. I managed to get a shot of ES44DCs 2329 and 2257, as well as a sporty yellow hatchback. Not bad for a few Hail Mary photo attempts. 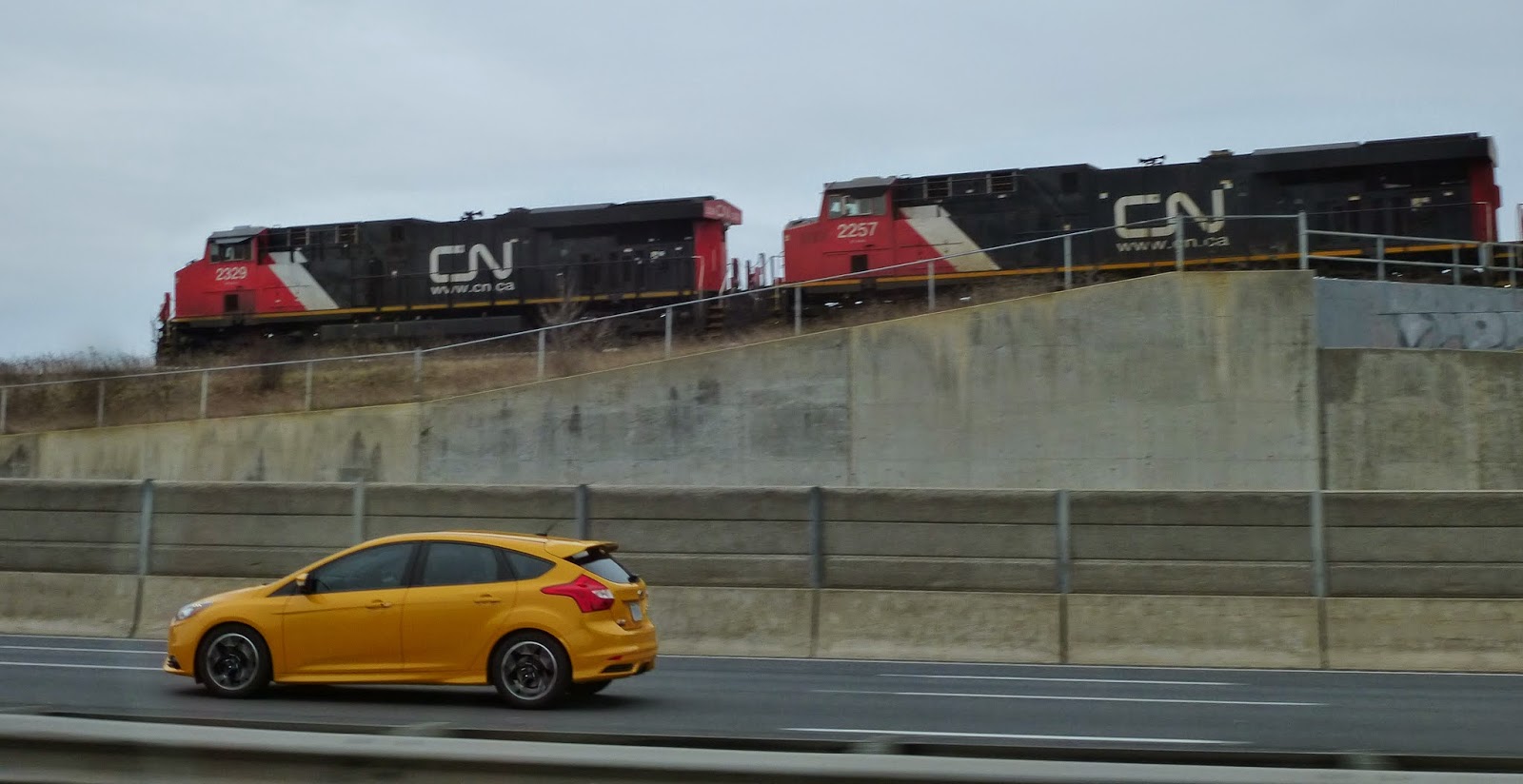 I should mention that this post was partly inspired by fellow blogger Eric Gagnon, who recently mentioned that it is important to take photos of even the mundane things along a rail line. Given how quickly things change in rail, even the smallest things might mean quite a bit more years from now. Given the uncertain future of some of these bridges, I think Eric's advice is particularly relevant.
Posted by Michael at Thursday, January 29, 2015
Email ThisBlogThis!Share to TwitterShare to FacebookShare to Pinterest
Labels: bridges, CN, GEXR, Goderich-Exeter Railway, Highway 401, Kitchener, Ottawa, Peterborough, Pickering, railways, Sarnia, Toronto, trestles

I *love* bridges. Great post! I agree about documenting the mundane - especially in this digital age.

Great post as usual! I've always been a fan of rail bridges myself. I think it is partly due to bridges being a constant in moving hobby that is rail. Granted I drive under a pair of them every day to and from work and have been spoiled with some incredible ones out west in recent memory! Plus the older ones have loads of personality. Take the Smiths Fall's sub bridge you mentioned for example - incredibly cozy and picturesque!

As for the Carling bridge, I am sure you know this, but an interesting tidbit is that it was the narrowest bridge on a Kings Highway in Ontario for several decades (being former Highway 17 road). I also recall that it was built in the 20's.
Another great couple of bridges that I love in Ontario would be the ones along the scenic portion of 17 between Chalk River and Matawa.

Thanks for the comments, gents. Good additional information, AJ. Not being a native of Ottawa, I didn't know that the Carling bridge was once part of the old Highway 17.

Thanks for the shout-out in this interesting theme post, Michael! Oh, that old train bridge - I drove under it every day. Whaddya mean it is gone...

Two interesting things about the in-car 401 bridge - just west of Oshawa yard so I wonder if that short train had dropped off some empty auto racks there before heading to MacMillan Yard. Second thing - when CN works on the ballast on that bridge deck, they place 4x8s of plywood all along the edge so nothing falls on the traffic below.

Good post on the bridges. There are a couple of other nice ones in the Ottawa area on the Quebec side as well, Pont Noir bridge (shared with STO) and a couple of others on the Lachute Subdivision.

I would agree with Eric that the train most likely dropped the majority of it's traffic in Oshawa.

Also, if you're up for it, it would be awesome for you to get a shot of 532 passing over the Highway 2 bridge on the Elevator Spur in Prescott/Johnstown!

Fantastic post! I too am very fond of railway bridges. Another one that I think is worth mentioning in Ottawa is the 416 bridge for the Renfrew Spur. This bridge has a scenic element created by the Gatineau's in the horizon (facing north of course.) I've always wondered what it looked liked before the bulk of the 416 was built in the 90's.

Thanks for the comments everyone. I've got some great ideas for bridges to shoot in the future.

Seconded Michael. On those blue sky mornings where I take Cedarview to get to Baseline for my commute, the bridge looks fantastic. Pretty much from the Bruin Road intersection downhill to the bridge leaves a nice view.

Hey, the location of that bridge on the trans-canada trail just west of Orange Coroners road is 44.306319,-78.486498 according to google maps, in the City of Kawartha Lakes. It is named Doube's Trestle bridge and it was restored a few years ago by the Ministry of Natural Resources but I am not sure who owns it today

Thanks Justin! Nice to know I biked as far as Orange Corners in Kawartha Lakes. Thanks for that additional information. I will make a note in the photo.