Catching up with the neighbours

On Aug. 18, I found myself with a few hours to take in some big-time railway action in Sarnia, where I was treated to two feasts. One was the movement of a mixed freight heading toward the Paul M. Tellier Tunnel beneath the St. Clair River. The other was a full-fledged interchange between CN and its Sarnia neighbour, CSX.

After happening across the tunnel train from a cul-de-sac abutting the yard, I moved on to Sarnia's Via Rail station, to catch what I could. There, I noticed another railfan sitting on the platform and two CSX GP38-2s idling a few tracks over. The other fan seemed absorbed by something on his phone, so I didn't bother him.

The shot beneath is the one of the best from this meet, with CN locomotives bringing a string of cars into the yard for the two CSX GP38s to pull back to CSX trackage. This meet all started with the second photo (below). Here's an earlier shot of another Sarnia interchange train. 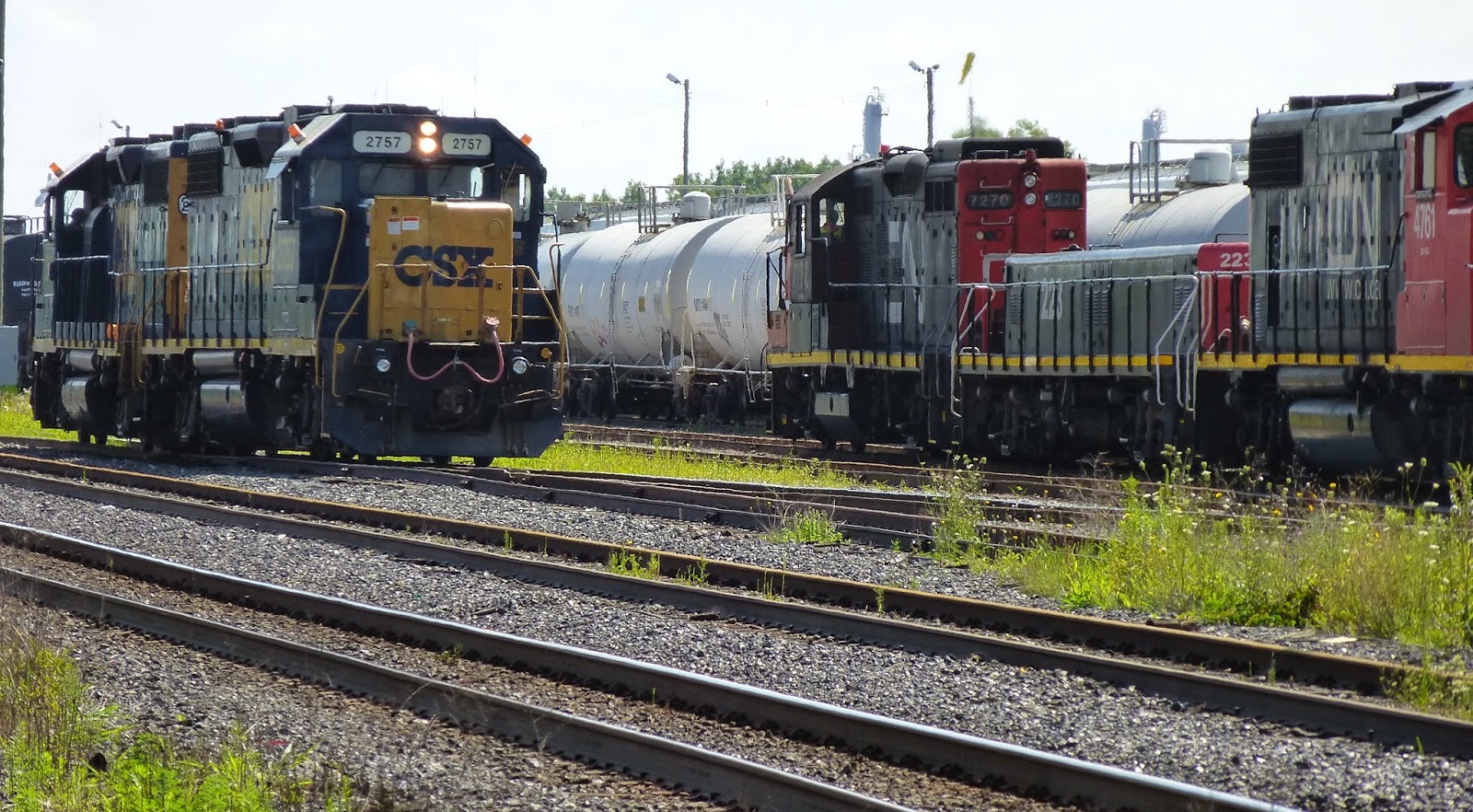 Above: CN GP9 7270, slug 223 and GP38-2W 4761 pull a string of tank cars and covered hoppers into Sarnia Yard, where they will then be taken off to CSX trackage into the Checmial Valley and beyond.
It all started with some pretty standard shots of these geeps idling. The lighting was tricky given the time of day (late morning). This was the best vantage point, since every other shot bleached out the sky. You can see the signal bridge to the right. All those tracks are due west toward the St. Clair River Tunnel and various turnouts including the Point Edward Spur, the CSX/CN interchange points and the CN St. Clair River Industrial Spur. I had planned to wait for a few minutes to see if something else was going to happen, when I heard a sound coming from the west. I then headed down toward the signal bridge. 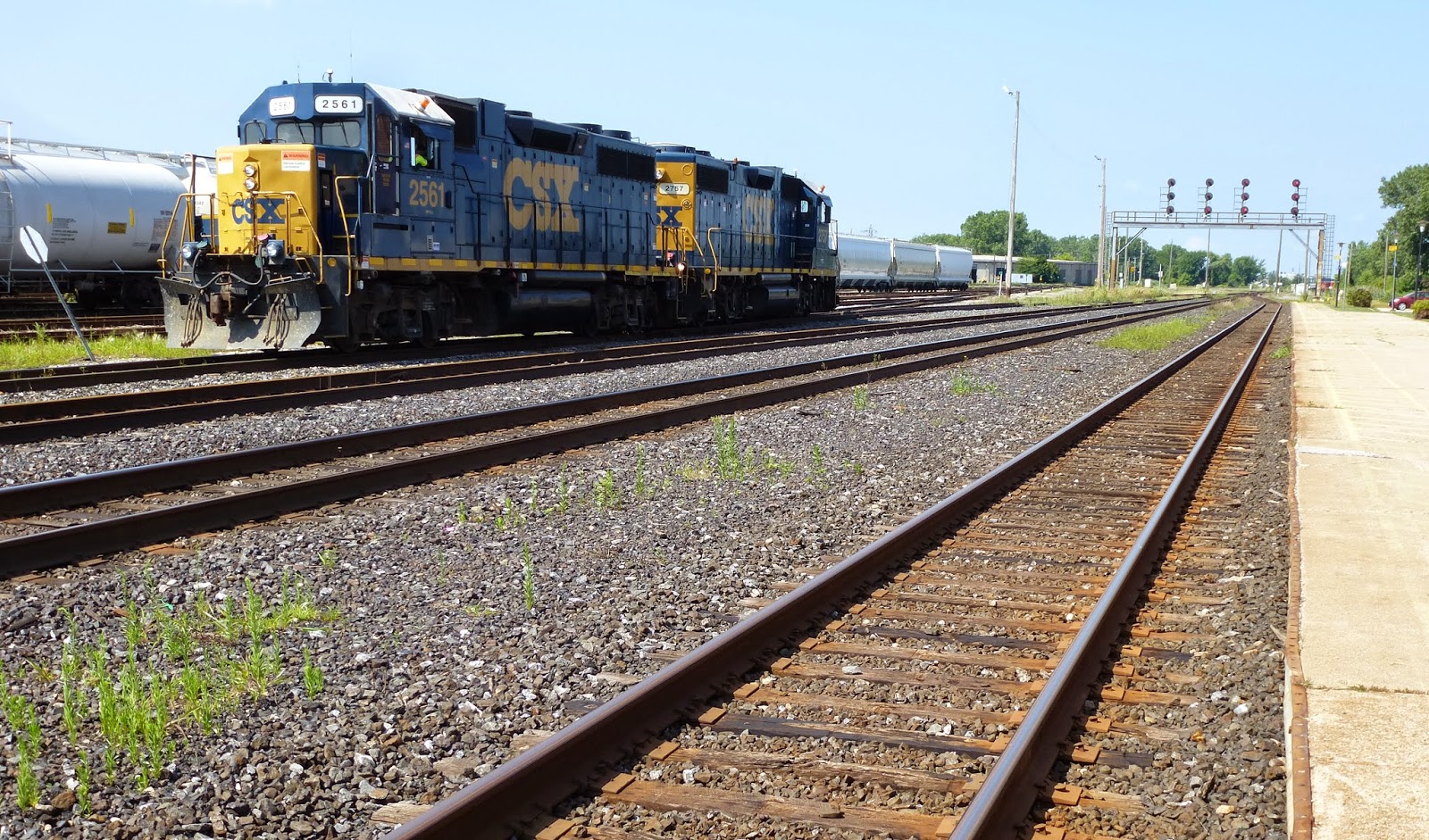 But not before I snapped a quick shot of all the stickers on the geep. The sticker below the number board read "ECO TRANS K9 APU equipped." That means this was a rebuilt unit, complete with fuel efficient components and emission reduction components built in. You can see from the flashing beacon that these units are also equipped from remote control. The yellow arrow at the edge of the hood says "STEP." 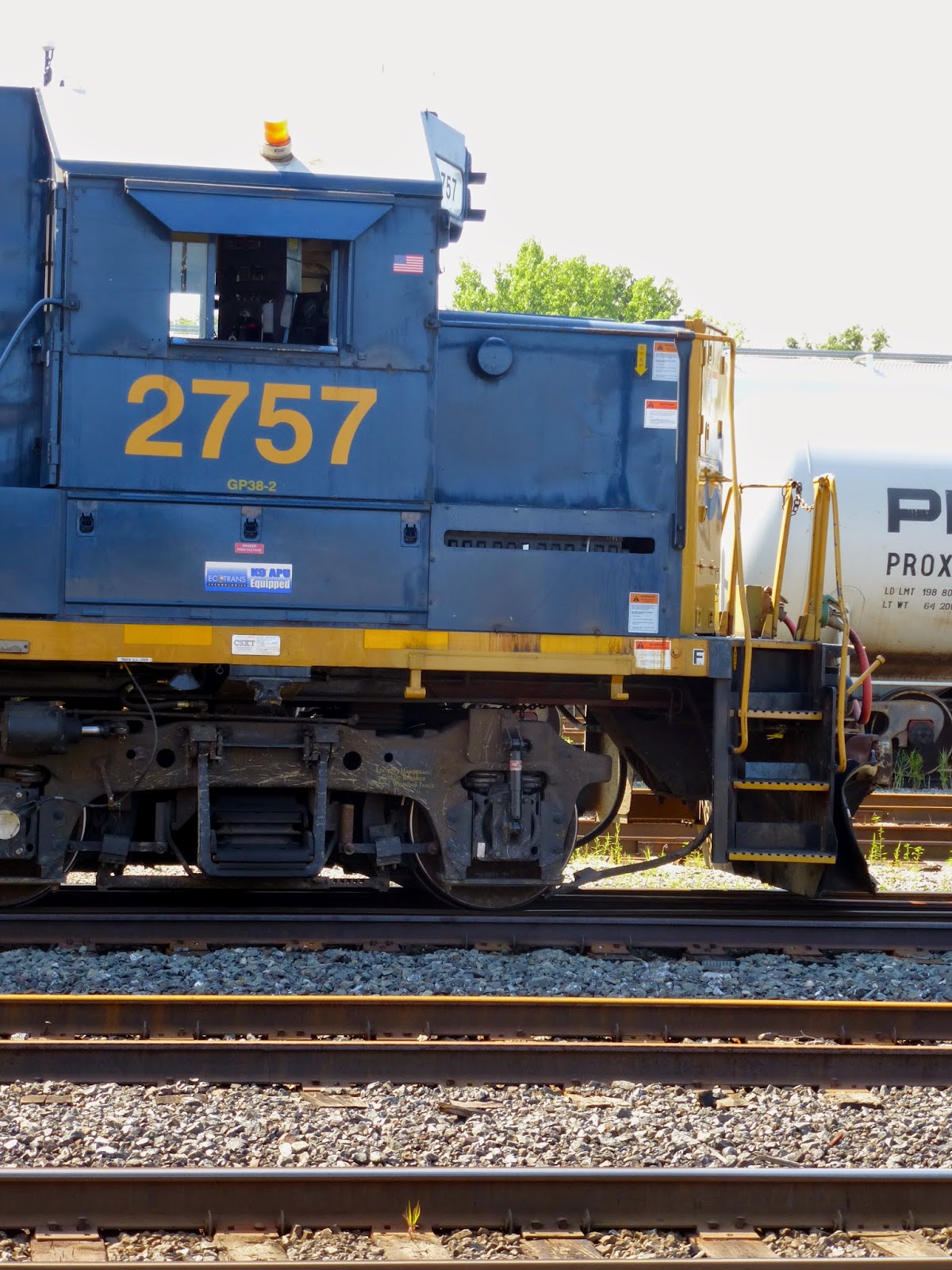 Details, details. There was an interchange consist making its way into the yard. I had to hurry to the edge of the platform to catch this train. I was happy to see the GP9 working with a slug. Another GP38 was helping out as well. You will recall I posted some photos of this train in an earlier post, More relics on the rails. 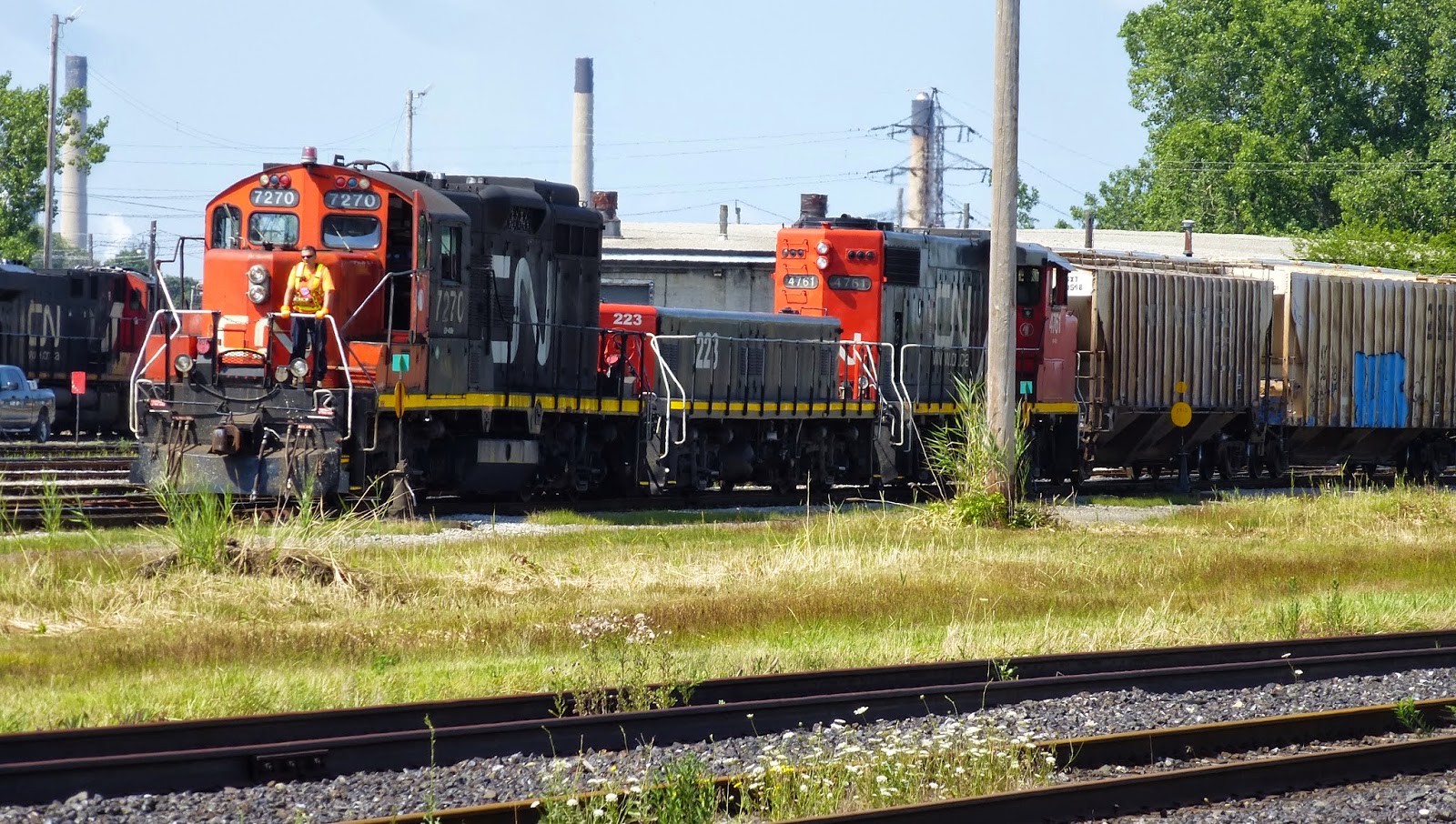 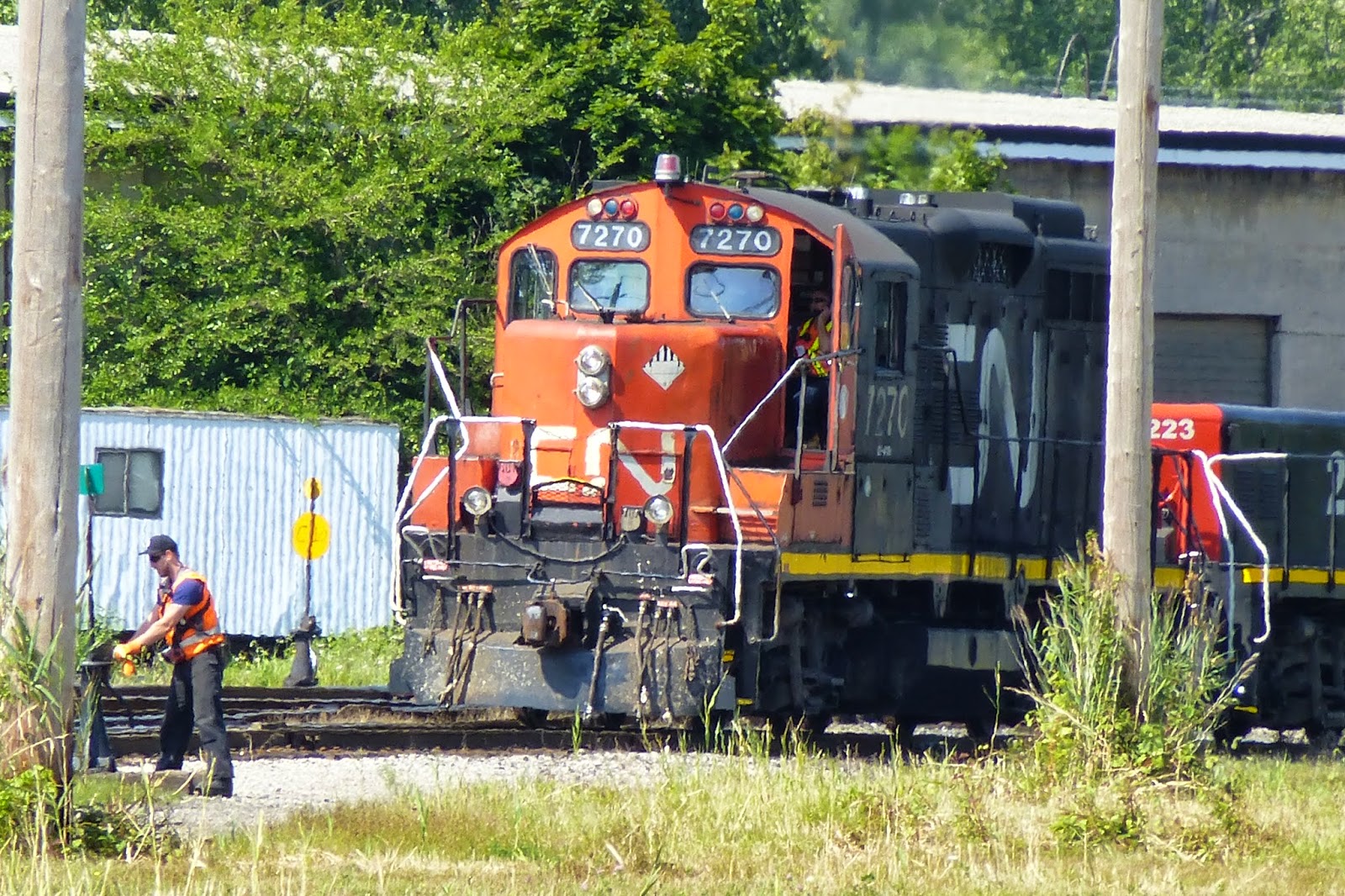 I then ditched the zoom and started to frame for some wide shots, to catch more of the train. This shot below turned out pretty well. You can see the engineer controlling the GP9 with a belt pack while the conductor stays by the switch (Please see comments below). You can also see the Family Lines System hopper (third car) entering the frame. The hopper directly behind the locomotives was obviously a Family Lines hopper, although the paint was obviously removed at some point. 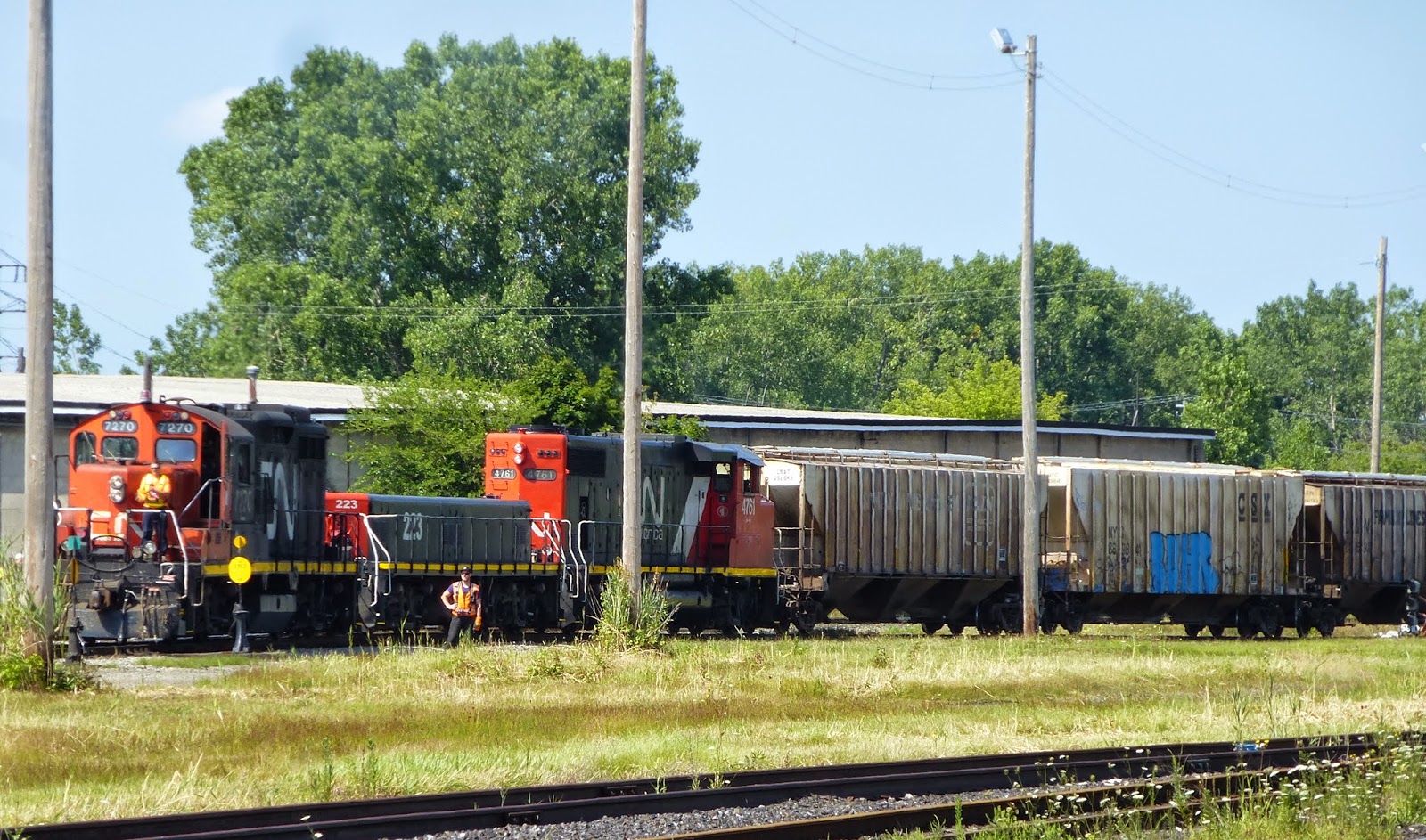 CSX's interchanges with CN were once much more plentiful. At one point, CSX had much more to offer. The CSX Sarnia Subdivision was once a vital link between CP's Windsor Subdivision (in Chatham) and CN's Strathroy Subdivision. This meant that oversized rolling stock like high-cube boxcars and autoracks were once routed between Chatham and Sarnia via CSX. While CP had a rail ferry service on the Detroit River like CN did for the St. Clair River, a great deal of autoracks and oversized boxcars, with auto parts, were nonetheless routed through Sarnia via CSX.

Since the new CN rail tunnel opened, CSX's operations in this area have been reduced to servicing local chemical plants along its trackage in Sarnia and St. Clair Township, as the transfer work dried up. CSX also discontinued rail service in Chatham-Kent recently, cutting off several of its agricultural customers there. The southern end of this line is now in limbo, and the move to halt service effectively severed the CSX Sarnia Subdivision from all but the CN Strathroy Subdivision as its link to the North American rail network.

CSX's line still counts a number of industries on its line, such as Imperial Oil, Lanxess, Suncor, Shell Canada, the former Ethyl Canada site (developing business park), Nova Chemicals (formerly Dupont Canada site in Corunna), Ontario Power Generation (soon to be closed coal plant), Terra International (formerly C-I-L), and Methes Energies Canada (biomass fuel plant at former Chinook Chemicals site). Not all these sites have rail service, but there appears to be more than enough demand to keep the line going in a limited capacity for some time.

So this interchange will remain a fixture, much to the delight of train watchers like me, although what the future holds might depend on what development there might be along the CSX rail line. For example, at one point, Shell Canada was planning to build a massive refinery south of the soon-to-be-shuttered Ontario Power Generation thermal generating station, but those plans were scuttled several years ago. The line also counts the former Dow Chemicals site as a potential customer on its line, although its future use as an industrial park depends on what industry can be attracted to the site and how much of it might need rail service.

To be honest, I am surprised CSX's local operations have not been sold off to CN. The remnants of this line must still be too profitable to abandon right now.
Posted by Michael at Thursday, January 22, 2015

Thanks for telling the story of Sarnia chemical traffic and how it makes money for CSX and CN, Michael. You can tell it's chemical country because even CN Geep 7270 is placarded (on the short hood!)

What a great description of the area and the activity you saw! Thanks for that.

I too am surprised CSX is holding on to this.

Thanks for your comments, gents. Eric -- I never noticed the placards on the hood, good catch! Steve -- I managed to track down some carload numbers for CSX and CN, which provide an idea of why CSX I still in the game in this region. That will be in an upcoming post.

I am new to this blog but in beltpack operations there is no engineer. It's 2 conductors.

Thanks for the comment and welcome aboard GP9. I can only describe what I saw and captured in the picture, but I will take you at your word. Good information for future reference.

On CN in Canada the conductors have the belt pack jobs. I do know in some places in the US the engineers have it.

I should also mention that I grew up in Brockville so this blog is a wonderful find!

Thanks for the comments everyone. GP9 - I'm always open to being corrected. I find my readers have been an invaluable source of knowledge. I am by no means a railway expert nor do I pretend to be, but with your help, I'm learning! Thanks again!

I know it's not uncommon for CSX to transfer 100+ cars a day to and from CN. Also CSX seems to be running 3-4 shifts per day with anywhere from 3-6 locomotives on property- compare this to 2009 when there were ~ 2 shifts a day with 2 locomotives assigned to the area.
Bioamber is building a plant beside the LAnXess property along Vidal Street that will be serviced by rail, most likely a handful of cars per week. Supposedly there will be a new industry on the former Dow Chemical site in the near future that will ship by rail- a reason why some of the trackage was left ton the site, but I cannot confirm this.
With Chatham-Kent purchasing the CSX line between Wallaceburg and Chatham recently, rail business will hopefully pick up again and that'll mean more cars for CSX out of Sarnia due to the fact that whatever operator takes over the line south of Wallaceburg will most likely interchange with CSX at Sombra. There was at least one occasion of a 100+car train to Wallaceburg in 2013 delivered by CSX, so with a short-line operating the business anything is possible.
With all this future potential, plus the busy business already on the Sarnia Sub., I'd say CSX will be sticking around for some time.

Thanks for your comments, Myles. I love to hear from readers in the Sarnia area. I have heard that Ontario Southland is looking at the Chatham-Kent portion of the CSX line. Also, good information on the Bioamber plant. I can only hope CSX sticks around, since it was the railway I grew up watching in Corunna.