Ottawa has finally seen the light. I can't believe I am actually able to share this, but the city's staff is finally recommending that the city's O-Train light rail line between Bayview and Greenboro stations be extended south on existing trackage to the Ottawa International Airport and finally to the south end neighbourhood of Riverside South.

News outlets this week are reporting that city staff has put together a plan to extend the existing 8-km line to the EY Centre on Uplands Drive and to the Ottawa airport on a spur, before stretching the service to Riverside South. This would allow the city to reach several heavily populated neighbourhoods in the south end of the city, not to mention two busy hubs (EY Centre and airport) that would greatly benefit from a rail link to the downtown core, even if it is via Bayview Station at the moment. 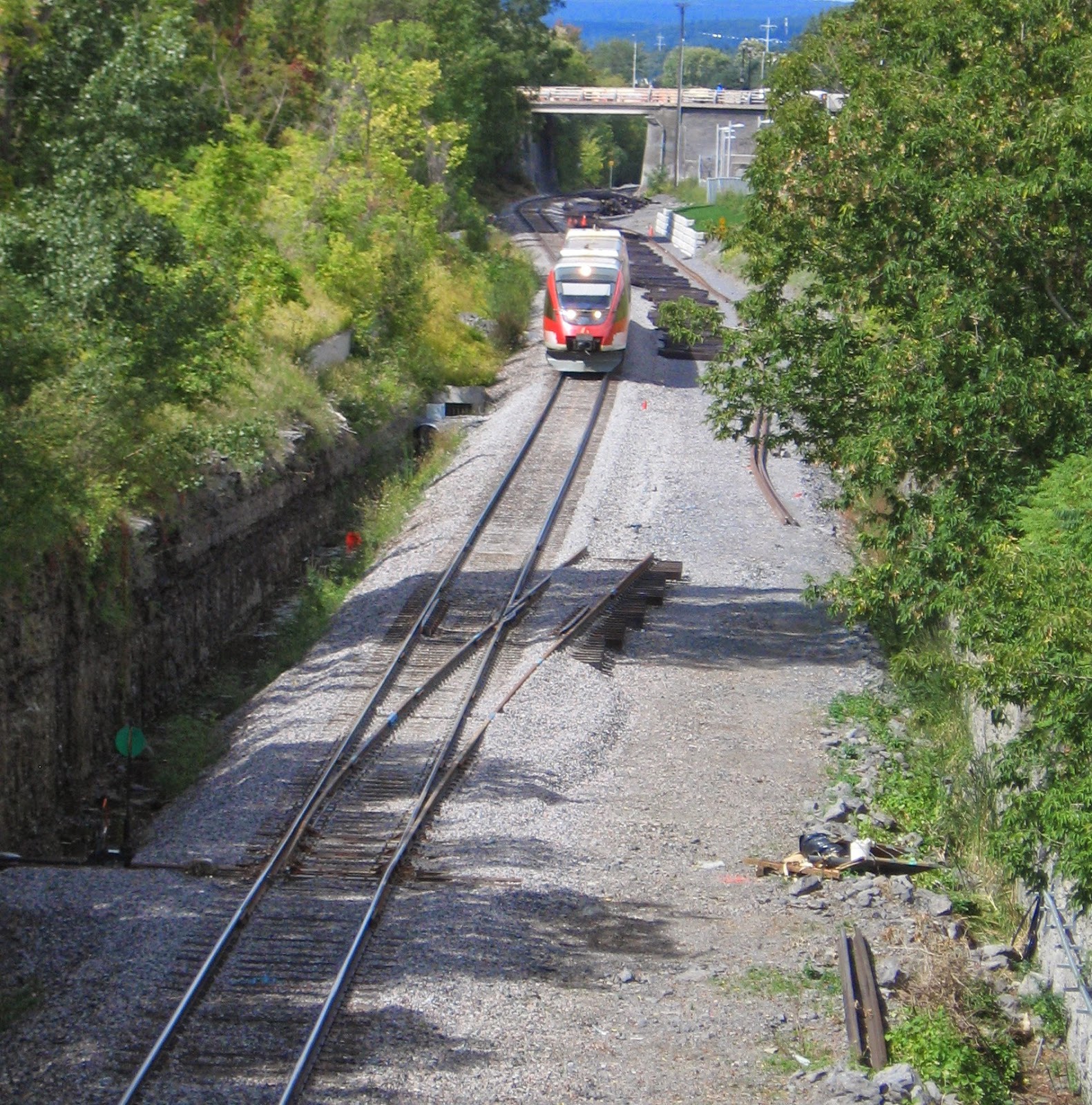 Southbound O-Train makes its way toward Gladstone Avenue in September 2013.


The cost of this expansion is $99 million without the airport spur, which would be extra. Staff is also not sure how the spur would work with the overall line, but it is surely a step in the right direction when the city realizes that a light rail line that passes through airport lands should serve the airport. You will remember from earlier posts that the city was ready to explore this expansion minus an airport connection since it was not along the direct path of the rail line.
Readers will know that this extended service will operate on existing trackage that was once part of the Canadian Pacific's Prescott Subdivision. This trackage still stretches as far as Leitrim Road, on the southern edge of the airport lands. Part of this right-of-way is still used by CN to deliver cars to the National Research Centre's transportation research facilities on Lester Road. The line would then have to be extended on the former CP right-of-way south of Leitrim Road. This stretch of the line was torn up in 1999 and replaced with what is known as the Osgoode Link Pathway recreational trail.
Amazing isn't it? Two years before the city started operating its O-Train line in 2001, it had the potential to retain a large portion of the CP right-of-way and didn't see the need to do so. Well, I guess 14 years late is better than never, even if the city now has to pay a great deal more to relay ballast and tracks.
This expansion plan is part of a rebranding of the existing O-Train line. It will now be known as the Trillium Line. When the city's east-west line is completed in 2017, it will be dubbed the Confederation Line. The overall system will be known as the O-Train.
In related news, it appears the new Alstom Coradia LINT light rail trains will make their debut on the Trillium line in late February or early March. You can see a shot of them in Walkley Yard in this post. These new trainsets will allow the line to accommodate a more efficient schedule, which would see trains operate at a frequency of eight to nine minutes instead of the current 12 to 15 minutes. I'm not sure if this means the Bombardier trains will be phased out at that time. I guess it might be time to get some last shots of these trains, just in case.
Stay tuned.
Posted by Michael at Thursday, January 08, 2015

Progress! Better late than never... and rail service to YOW would be great.

Yep, Steve, it's progress all right. I love to write about when the city gets things right.

The existing trainsets will be taken out of service when the new ones come into use, although they are being kept and could be pressed into service in the future to service extensions. This would likely be after a refurbishment and repairs to trainset C3 which was damaged by the derailment last summer and hasn't been used since.

The reason that both Bombardier and Alstom trains can't be used is that although they have similar loading gauges, the rounded shape of the existing Talents means the door opening is farther from the platform edge, necessitating large extenders. The new Lints are square, so the matching platform extenders are much shorter. These have already been installed on the platforms as the doors on the Lints are in a different position than the existing Talents. The difference is 4 or 5 inches between the extenders.

For both trainsets to be used simultaneously, the new short platform extenders would have to be installed in the locations of the existing talent extenders as well, and then permanent bridge plates would have to be fixed to the Talent trainsets. I believe similar trainsets in Norway have these extenders so it shouldn't be too difficult.

As the Talents are slightly larger than the Lints, bringing them back into a mixed service with the Lints could provide a small bump in capacity should it be needed, though it is more likely they would be needed for service extensions first.

Alex -- Thanks for that great information. Now that I read your comment, I recall reading about this in the papers some time back.

I spotted a white CN Chevy Suburban that was stopped at the light heading north on Moodie (I was on Hunt Club). First time I have seen a CN vehicle on the west end in years (ok, since I was a kid in the early 90's), so I wonder if they were down Moodie Dr. towards Kott's checking things out? I mean it is either that or the Beachburg sub....but then why approach from the south of Bells Corners via Moodie Drive and not the 417?

BTW does anyone else think it is sad I am excited about something like - something that somehow passes for rail news on the west end?

That CN vehicle very well could have been a personal vehicle that one in management gets as his own while they are employed, doing personal errands.

I will have a post regarding the west end later this week, AJ. Stay tuned. I think someone from Bells Corners works for CN because I saw a company truck parked on Old Richmond Road for a months a while back.

Thanks for the heads up Michael and this will be interesting to see for sure.
When I am visiting friends and family outside of Ottawa I tend to notice these vehicles a lot more and that is probably as GP9 suggested. That said, this is the first I have seen locally in awhile (I live and work in Bells Corners/Kanata/Stittsville every day and am out and about so it stands out quite a bit - not a scientific way to gauge things, but I doubt it is a coincidence as well) and given the recent fate of Beachburg, it does make you wonder....

589 to Ivaco monday thursday & Saturday lvs Walkley yard btw 10:00-10:40am cn has been doing track work on the Beachburg Sub