No such thing as too much of a good thing

Most people in Ontario dread having to travel Highway 401. I look forward to it. I have created a game for myself where I try and get decent shots of trains at places along the highway where tracks parallel the freeway. I do this almost out of necessity since there are so few opportunities to shoot railway action in Ottawa, outside of Via Rail.

I first tried this game when my family was coming home from our Christmas visit to family in southwestern Ontario earlier this year. You will recall from this post that the results were less than stellar. But this time around, there was no shortage of trains to shoot. It was an embarrassment of riches.

On Aug. 15th, my family headed southwest from Ottawa en route to Petrolia, Ont. to visit family in the Sarnia area. I was determined to be prepared, so I asked my wife to drive the first leg of the trip from Ottawa past Kingston. I knew Kingston had a couple of spots along the 401 where the tracks parallel the highway. As luck would have it, A CN manifest freight was making its way west, so the hunt was on. I took this first shot below and was quite happy with it, thanks to the complexion of the sky and the variety of rolling stock. I noticed that we were closing in on the front of the train, so I readied my camera to try and get a shot of the lead units 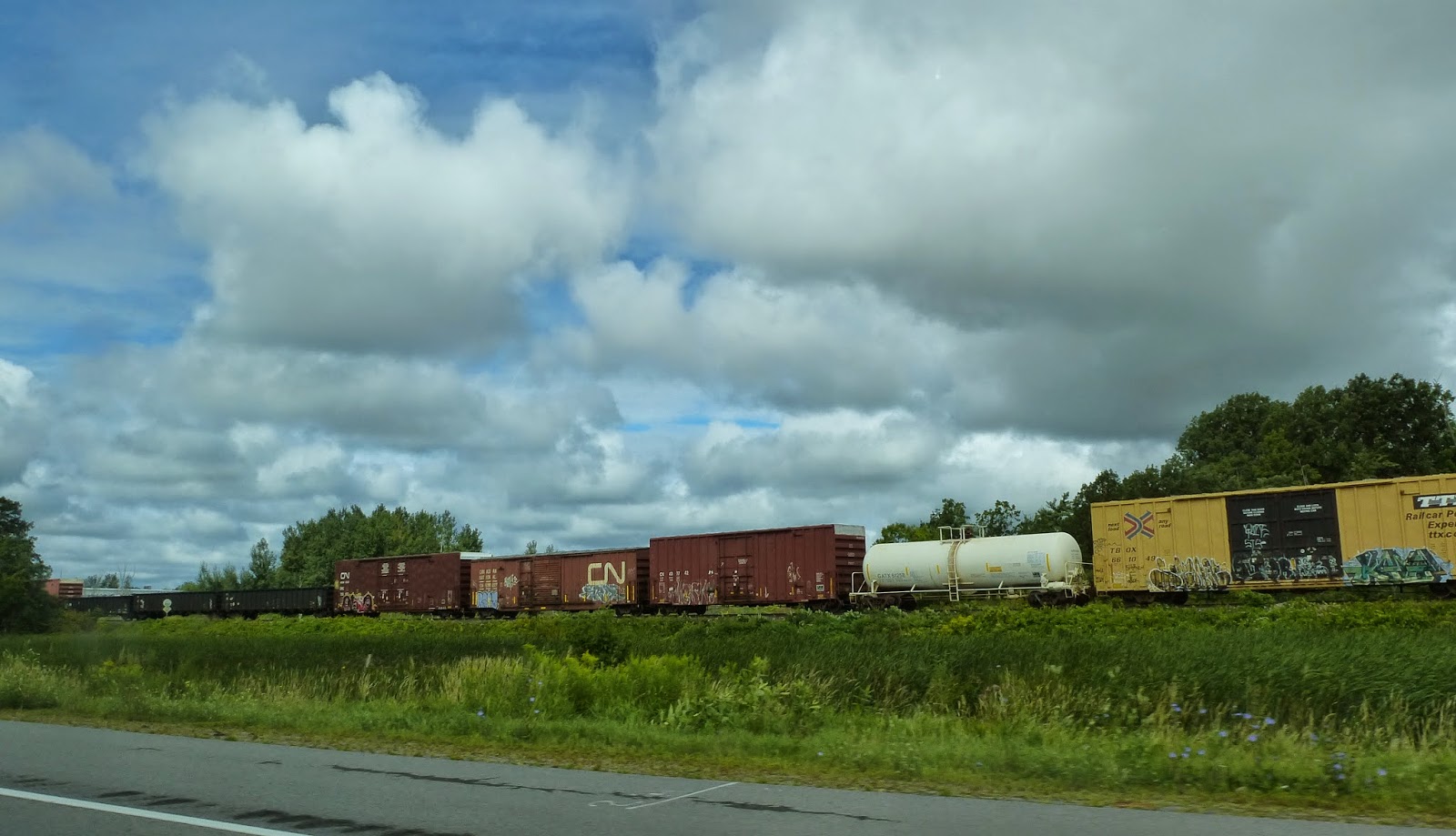 What a surprise. The train was being led by two CN units and an oddly painted former BC Rail unit, in dark blue and yellow. I didn't know what I had captured until I uploaded the shots to my hard drive and took a closer look at the unit. I thought I had captured a former Illinois Central unit, but I ended up capturing BC Rail 4546. I looked around for more on this unit, but didn't come up with anything (Update: fellow blogger Steve Boyko pointed me to this shot of  a similar BC Rail unit in dark blue). The highway barrier snuck into the shot, which is a hazard of shooting along the highway, but I was happy I just barely caught this locomotive. You can see some glare from my passenger side window. Another hazard.

This was another shot of the train as it crossed under the highway. I like the pastoral view. Sure, it's just a string of tank cars and part of the highway barrier is in the bottom corner of the image, but it still works for me. You will notice that summer in Eastern Ontario has been good for all things green. This train proved to be a lot of fun to watch and shoot while our car made its way down the 401. I should mention that a Via Rail corridor train was also passing by at this time, but I couldn't snag a shot of it. 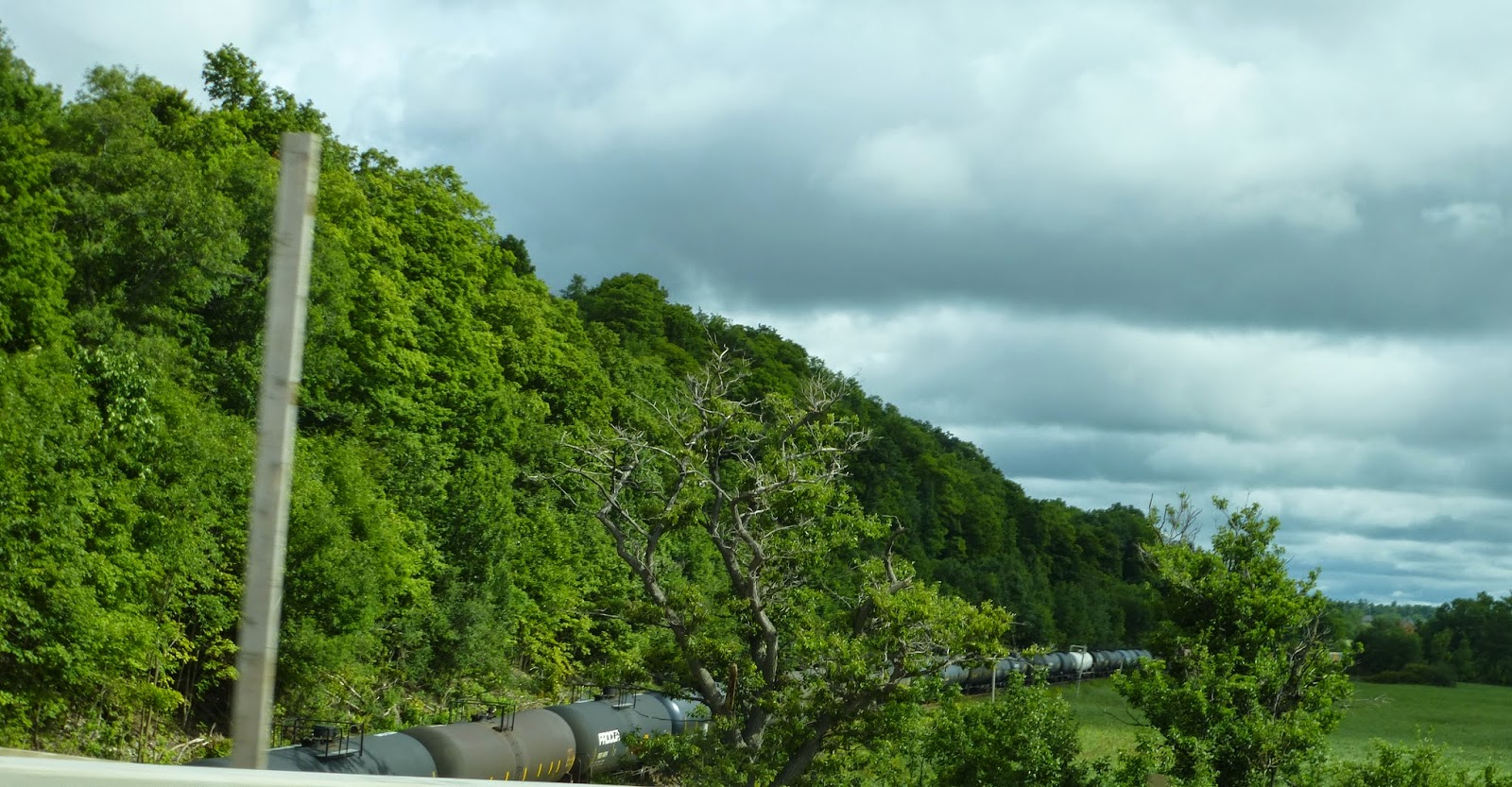 On the way home on Aug 23rd, we decided to take the 407 across Toronto, to avoid the endless construction and traffic on the 401. I didn't know what to expect, since we rarely take this toll highway. But as we crossed through Vaughan near CN's MacMillan Yard, there was some action to shoot, including this intermodal train led by CN 2288 and two BNSF units, 6649 and 4821. This shot is my first image of BNSF units, so I considered it the highlight of my highway adventures. This scene is far from perfect, as hydro poles and some transmission towers got in the way, but this is part of the challenge of this game.

A little further east, another intermodal was making its way toward MacMillan yard (below).

We made our way back to the 401 as we continued our way east. Of course, a patch of construction and an accident brought our car to a stop. It worked out for me, though, since a GO Train was making its way west toward downtown Toronto with MP40PH-3C 611 doing the shoving. Again, it's not a great shot, but I considered it to be a decent shot from our vantage point. I looked through my images and realized this is the first shot of a GO Train I have in my collection.

During our vacation, I managed to get all kinds of shots at the CN Sarnia Yard as well as a few shots of CSX action in the same area. Our family also made its way up to Goderich, where I was able to get some shots of the Goderich Exeter Railway and a few of the local railway artifacts in the town. The trip will no doubt feed this blog for months, so stay tuned for all kinds of railroadiana.

As mentioned a little while ago, my main laptop has been sent back to its manufacturer for a repair, which has prevented me from sharing photos that will form the third part of my series about Bedell Ontario. Stay tuned for that in the next little while.

I think that blue BC Rail livery was the last paint scheme they had before they were absorbed by CN. I've captured a few BCOL engines in the blue and yellow. It's very CSX like. See BCOL 4645 for example.

Results are encouraging from your 400-series drive-by's, Michael!

You might be interested to know that VIA used a photo of an LRC consist at that Kingston location on the cover of their October 1985 timetable. The cliff and trees are just east of the Montreal Street overpass which has just been widened to accommodate 3+3 lines on the 401. A foreman is there everyday to clear trains through the Rule 42 limits.

Thanks for the comments, gents. Steve- I have added a link to BCOL 4645. Thanks for finding that for me. Eric - Thanks for the added info on that area. It's good to know that others see the scenic quality of that section of the Kingston Sub!