Due to technical difficulties with my computer, I am not able to share the third part of my Bedell, Ontario series with you this week. I had loaded the images for this series on my main computer, but had yet to back them up on my removable drive, so those images are in limbo until the computer is fixed. Fear not. The images are not in imminent danger.

Rather than leave the blog idle for a week, I thought I'd share some thoughts about what is going on here in Ottawa lately. Let's start with Via Rail.

Service in Ottawa has been affected by two derailments this summer, as most readers already know. The most recent was the accident near Trenton. Although this has proved to be a tough summer for Via with service interruptions, the silver lining is that the railway's problems in Ottawa seem to have been solved. There have been no reports of any incidents in Barrhaven since late May, which I'm sure is a great relief to Via. The railway is continuing its work in the area, although I haven't heard where a planned passing siding will be constructed. I'm hopeful we'll get an update soon from the railway and its point man in the area, former Via COO John Marginson. 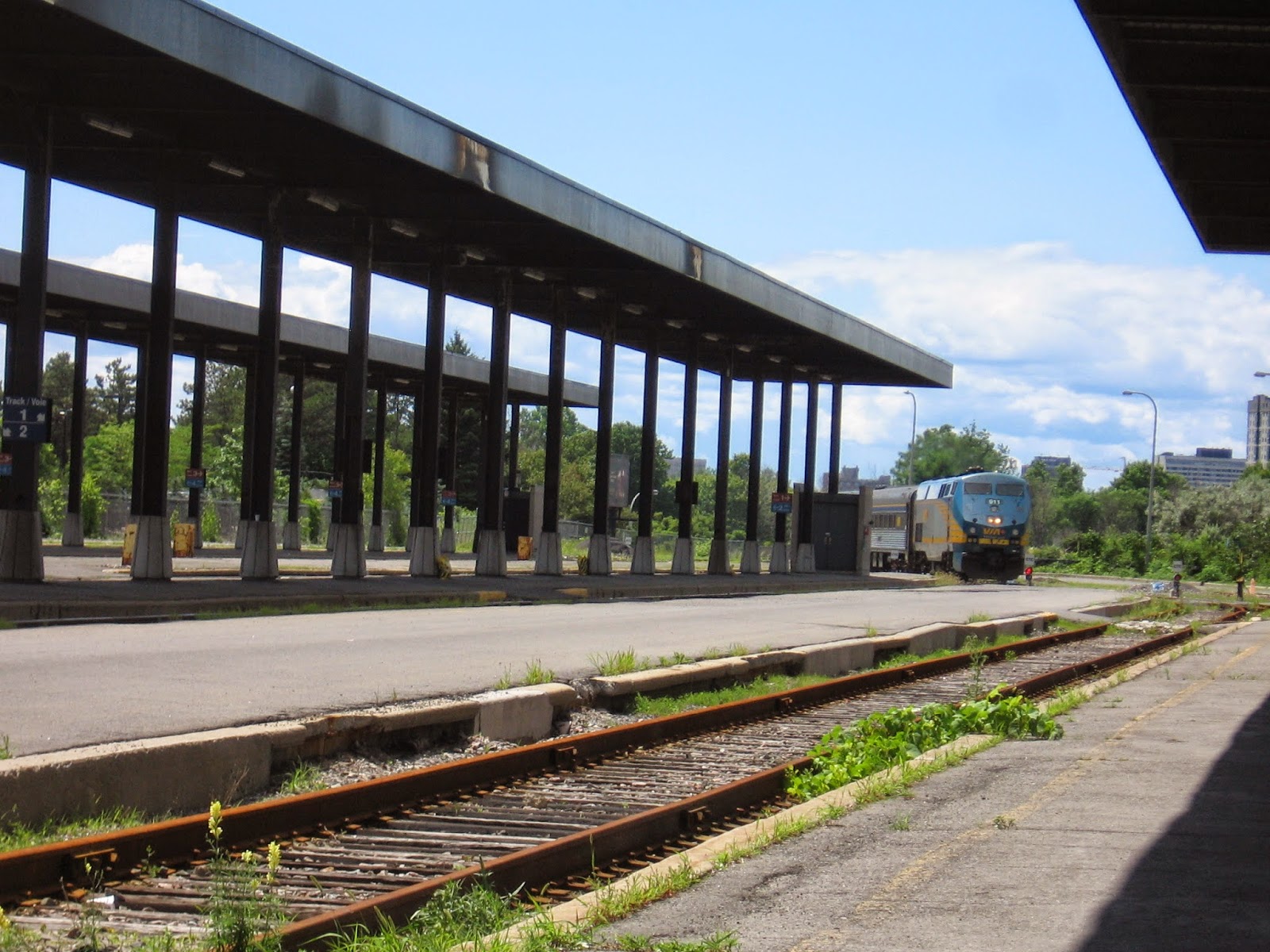 Above: Via corridor train from Toronto arrives at Ottawa's central station (July photo)
Here are a few photos of my meet with this corridor train from last month. I have to admit, as much as I dislike the P42s, they look like a good match for the streamliners. It's always nice to see these coaches in the corridor in the summer. 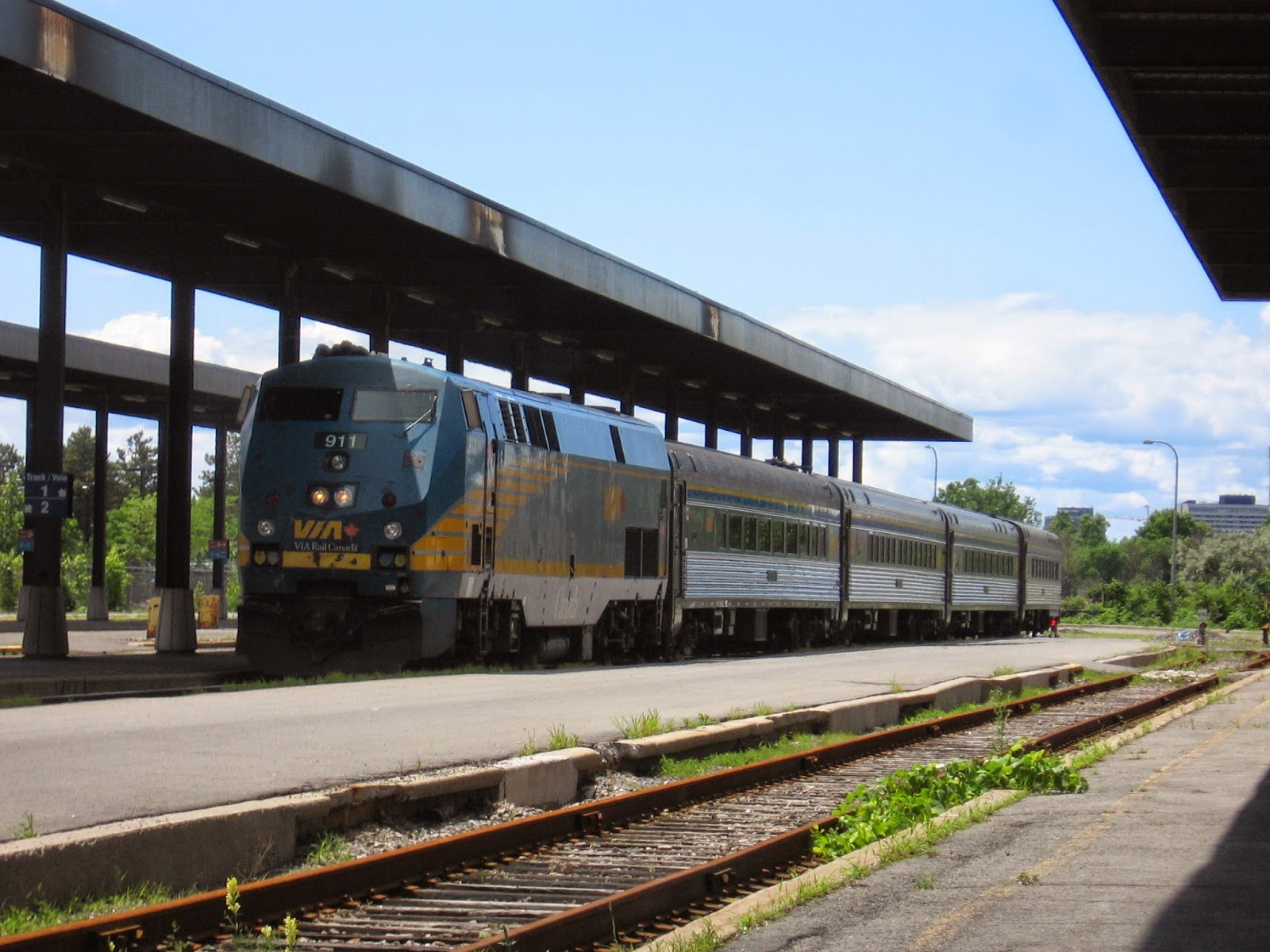 In the shot below, you can see the Belfast Road overpass, which is undergoing work as part of the construction of the city's Confederation Line O-Train line. The O-Train has been in the news recently as it gears up for the coming school year. The Capital Railway is preparing its Ellwood link for the beginning of the school year, when Carleton University students flock to the 8-kilometre line. 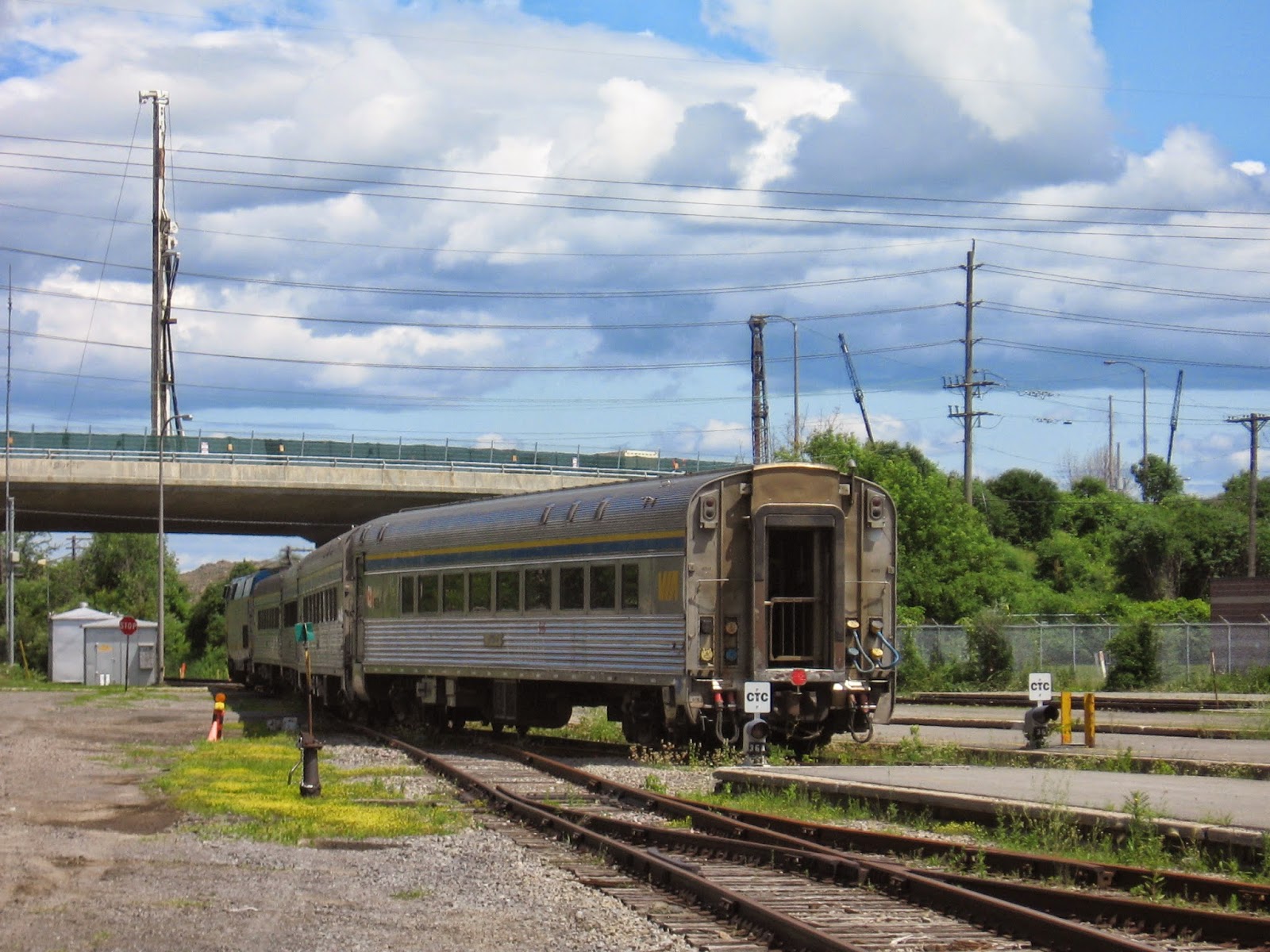 Unfortunately, recent work to switch the current O-Train line from its original signalling equipment to a new system has met with snags, delayed trains and frustrated commuters. Check out the story about the angry commuters in this story from the Ottawa Citizen. This latest round of work will complete the project started last year to expand the Ellwood line's capacity and make way for new trainsets. This was the state of the line in May (below). You can see below that the new signalling equipment had been installed but not activated. 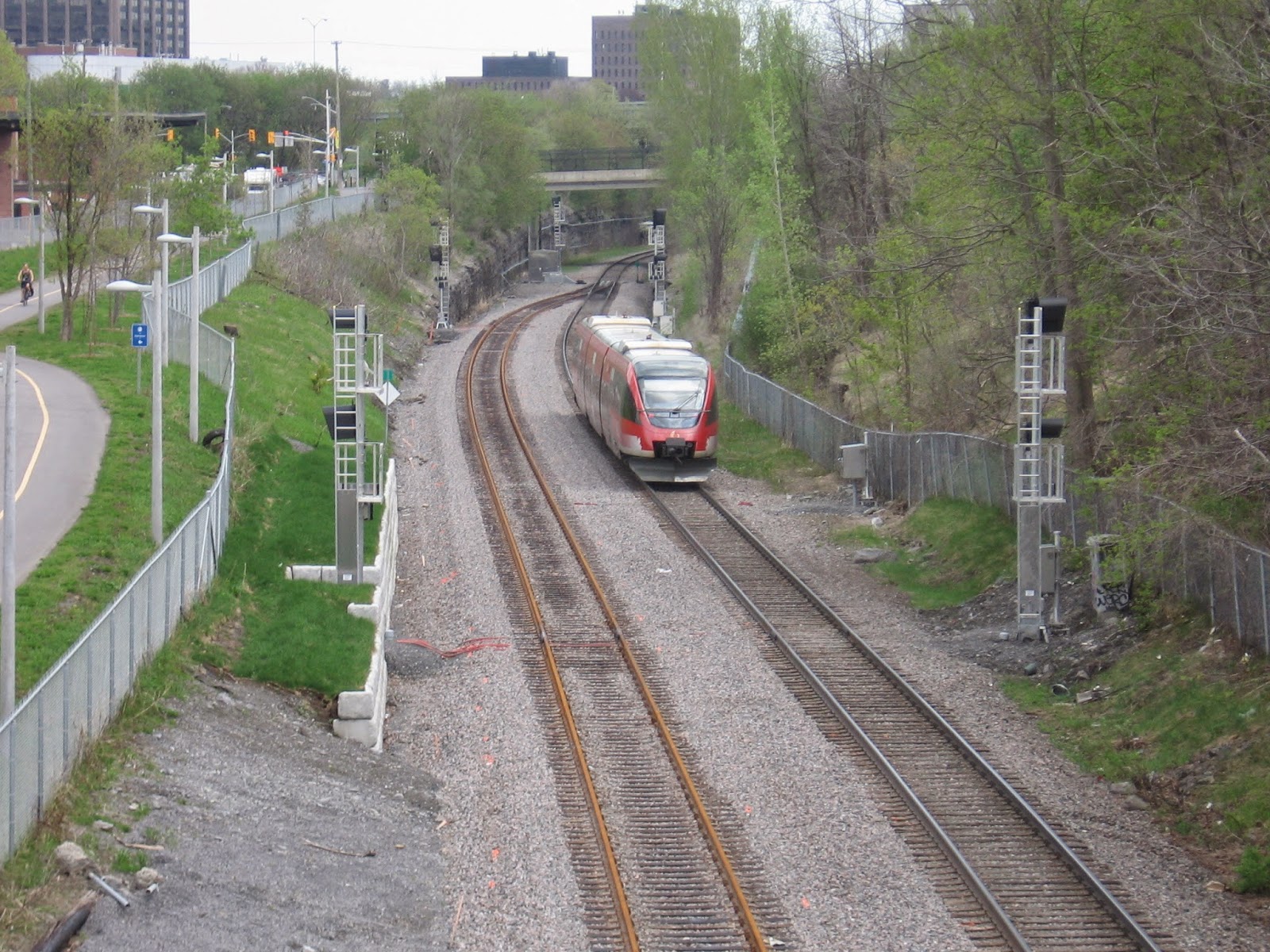 In late July, the new signalling equipment was brought online. As you can see, everything was functioning this week and operations appeared to be running smoothly. 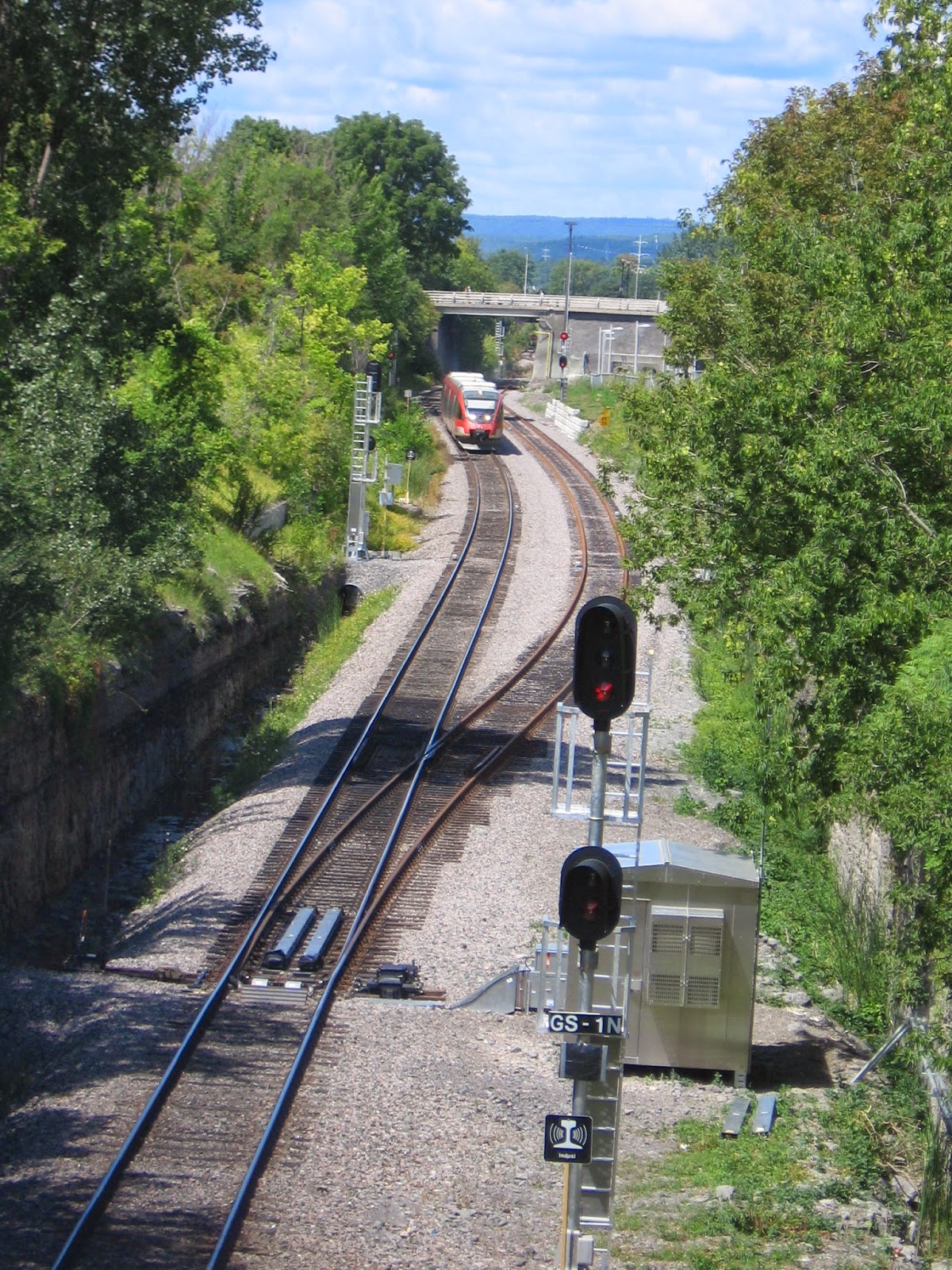 The final piece of this expansion will clear the way for the new Coradia-built trainsets, which will take the place of the current Bombardier trains (above and below). You can check out the new trains in this photo from an earlier post. I'm not sure when this change will occur, but I would guess it's going to happen soon. That means train watchers up here will have to get their final looks at these Bombardier trainsets. 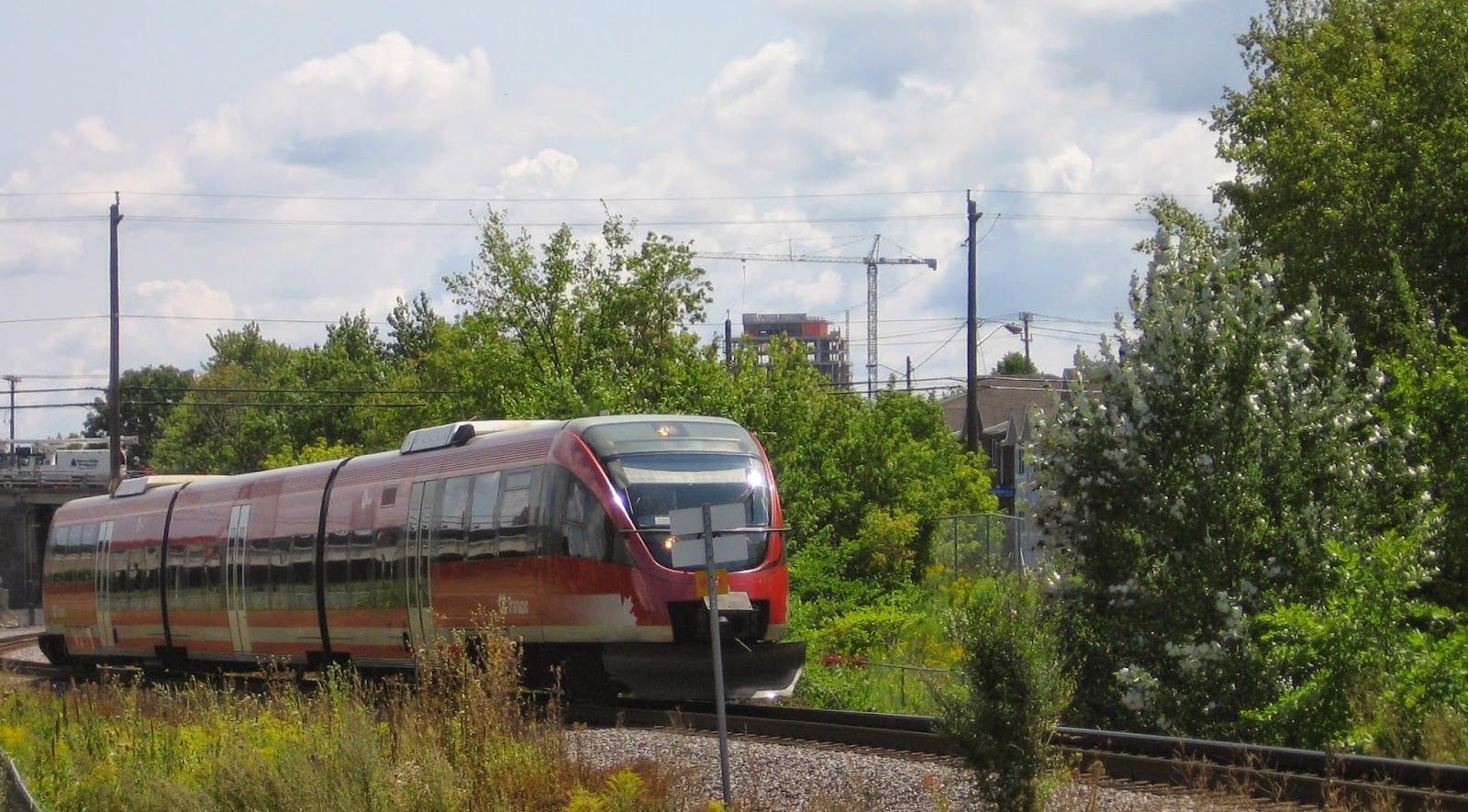 Summer Reading
I came across two fascinating articles and I thought I would pass them along to you. The first is the incredible story of the lost railway train that is, according to many here in Ottawa, still trapped underground below a long-since demolished brewery. It's a mystery to me why no attempts have been made to locate this piece of history and preserve it.
The second story echoes what I've been saying for more than a year on this blog. A local writer talks about how Ottawa's Prince of Wales Bridge is being left to rust while various government officials twiddle their thumbs. He also points out section 146 of the Canada Transportation Act that is allowing a number of railway lines to be ripped up with very little critical thought. This article is more of an opinion piece, so beware of the political rants.
﻿
﻿
Posted by Michael at Friday, August 08, 2014

Thanks for the links, updates and fine photos of the P42-HEP2 shots at Ottawa in this post, Michael. Hope the technology will get The Beachburg Sub back on track (pun intended)!
Eric