Catch me while you can: Nepean Junction

I went on a short hike this past weekend to take a look at a key point along the CN Beachburg Subdivision. I figured I should take a look now, since the 38-km stretch through Ottawa and the remaining rail in the Pontiac Region is more than likely to be lifted this spring.

My destination was a key junction, Nepean Junction, where CN's Renfrew spur (itself formerly a subdivision) branches off from the Beachburg Sub just north of Corkstown Road in Ottawa's west end.

The junction is accessible from a nearby stretch of the Trans Canada Trail, otherwise it is a tough spot to see unless you are motivated. When I arrived there this past Saturday, it was easy to see that nothing has been done to the Beachburg Sub since last fall when officials in the Pontiac Region stopped CN crews from ripping up track in their municipality. As you see below, the Beachburg Sub beyond Nepean Junction has not been maintained this winter, as snow covered much of the line past the switch. The track to the left is the Renfrew spur, which is still in use as CN serves Nylene Canada in Arnprior, at the end of the spur. 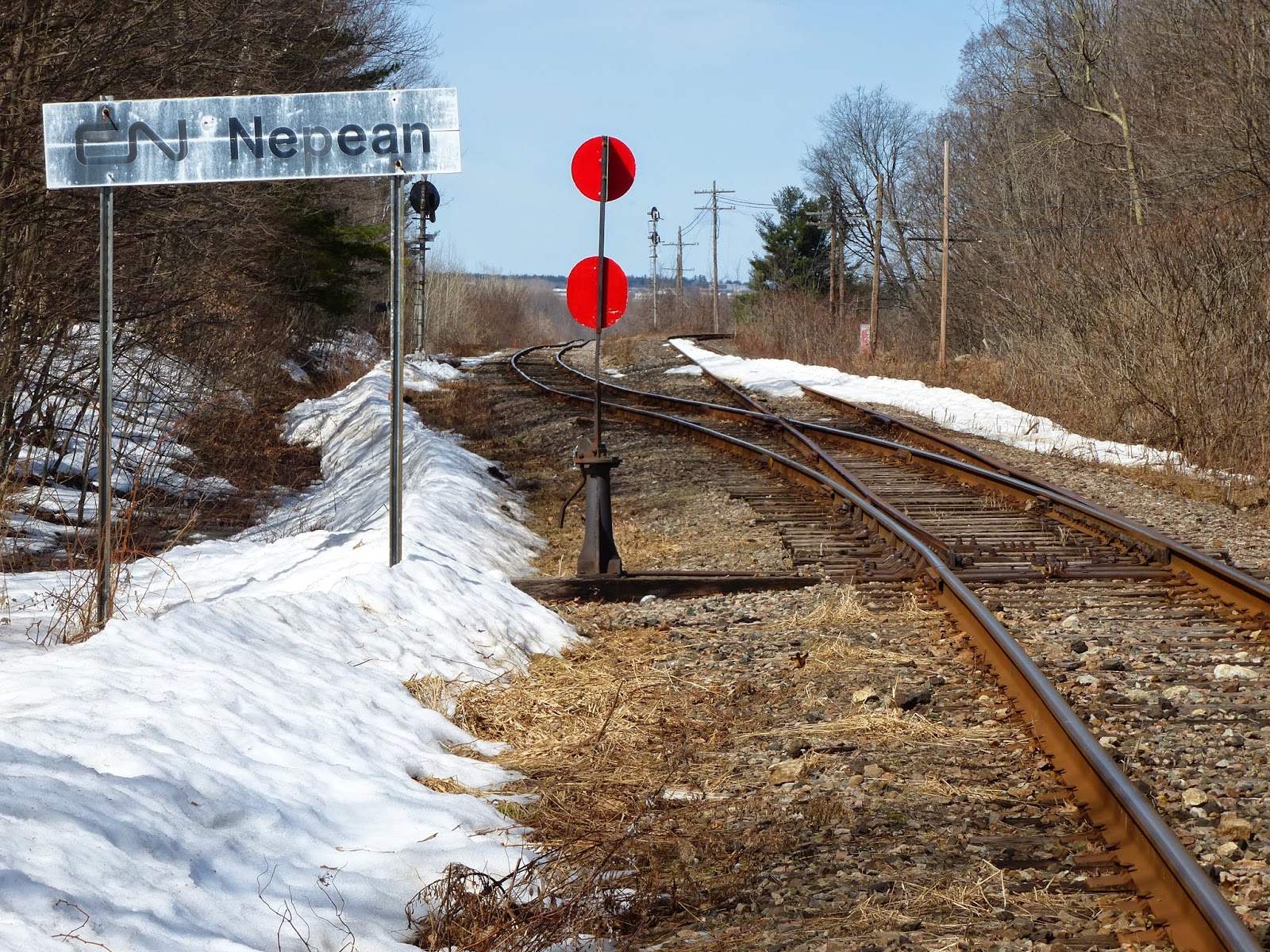 I saw some interesting relics as I made my way to Nepean Junction. Some old rail still lay trackside, covered in weeds. I made sure to look at the rail, since I was told a big reason why Beachburg was being torn up last year was the fact that it had continuous welded rail, which some blog readers reminded me was a precious commodity for CN. The rail where I walked was not CWR. Quite the opposite, in fact. This rail, I would imagine, would not be terribly valuable. Beyond the junction, the rail on the Beachburg Sub was also jointed rail. Still, I can imagine CN wants to rid itself of the burden of this inactive line, even if it doesn't have specific plans for the less valuable jointed rail still in place. 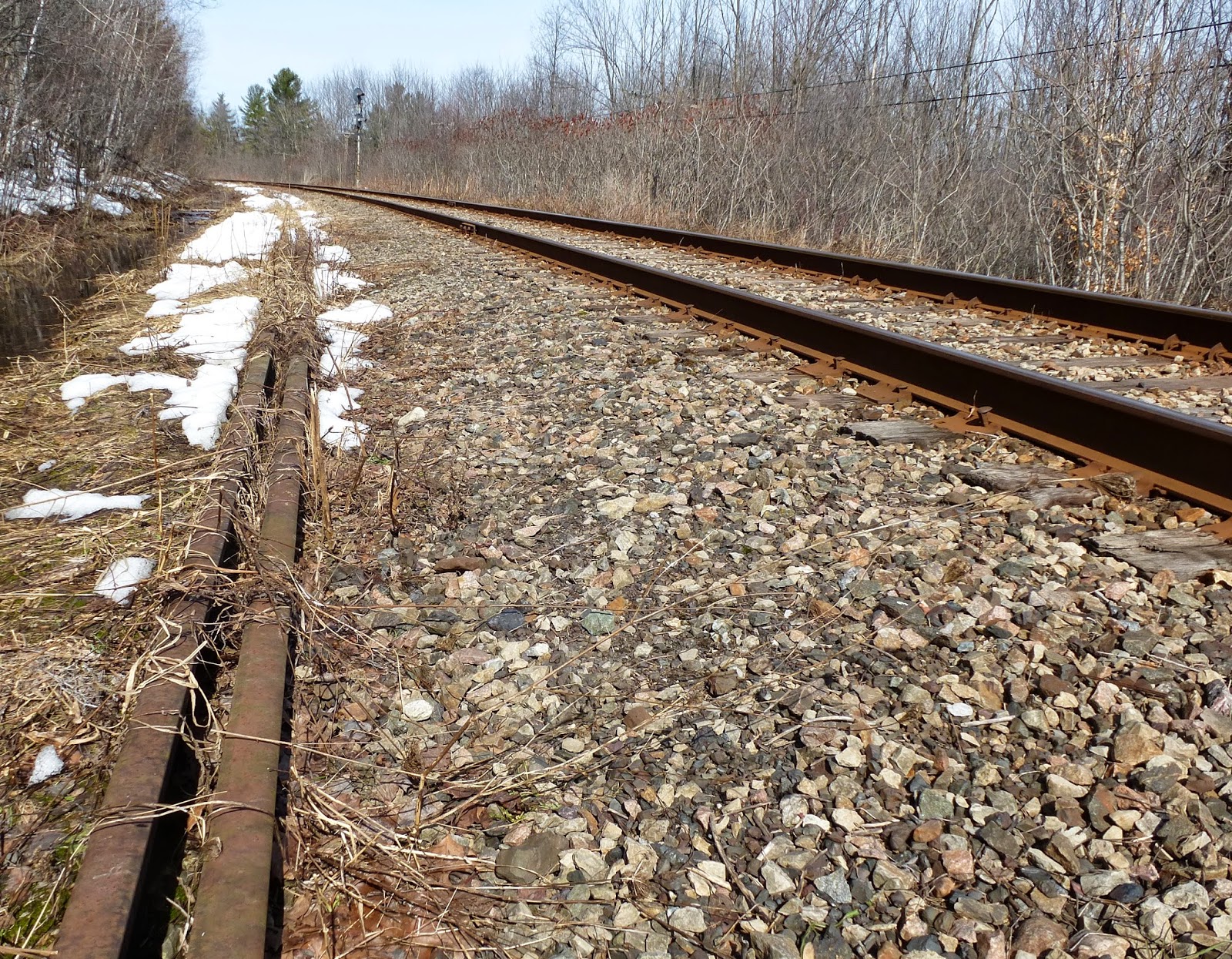 As I neared Nepean Junction, I noticed vestiges of better times, much like I did when I explored Bells Junction and the end of the old CP Ellwood Subdivision last spring. The site of disconnected signalling towers on Ottawa's remaining railway network is sadly pervasive. This is one of many such towers that have been gutted, but left to stand as a reminder of days gone by. 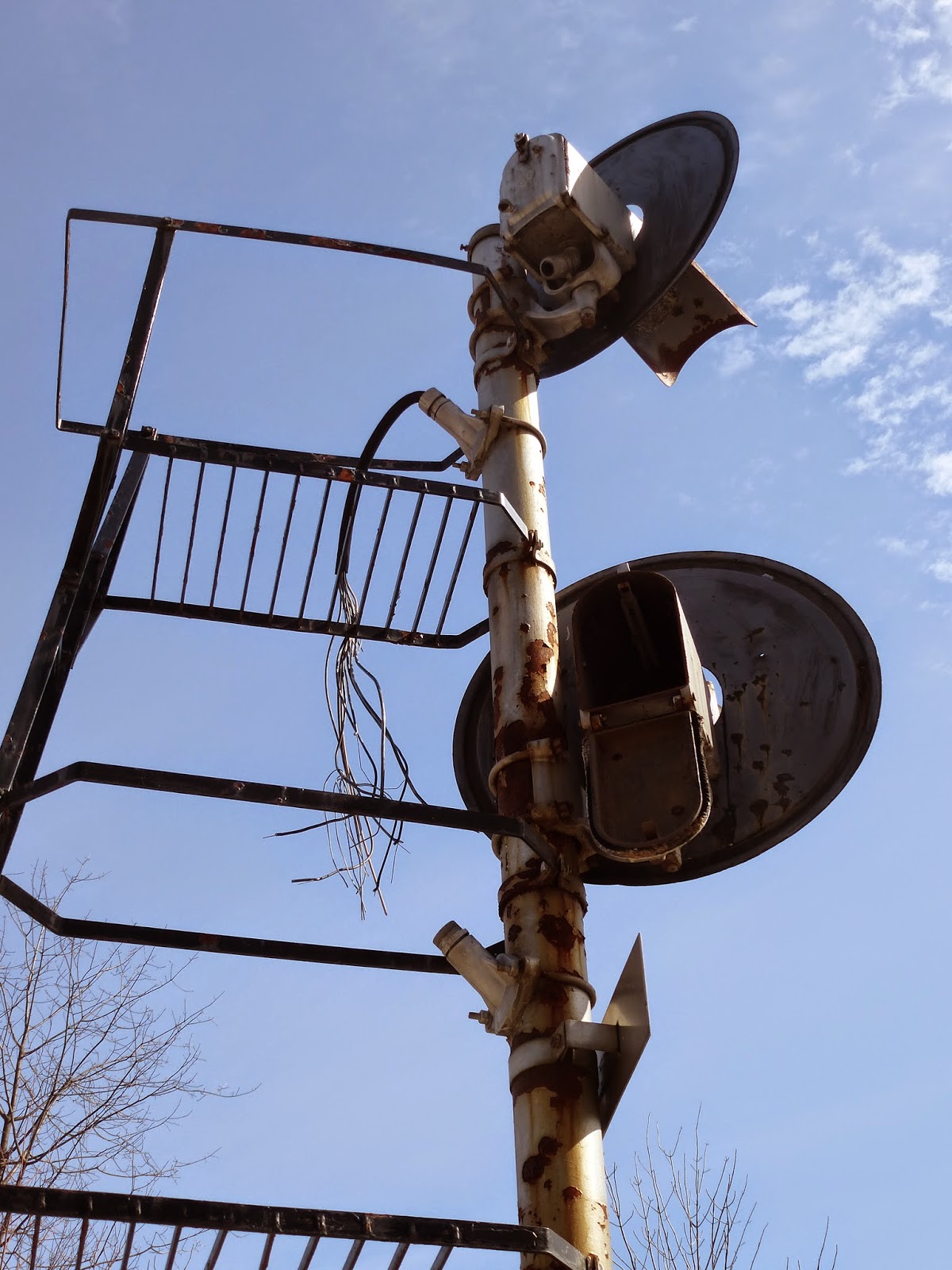 Another relic closer to the junction is this rusted snow plow indicator sign, which looks like it needs to be replaced. You can also make out the broken hydro pole in the background. I saw many such poles on my walk. Some of the poles were supporting fallen tree trunks. I saw a few logs trackside, which had been removed after having fallen on the right-of-way. 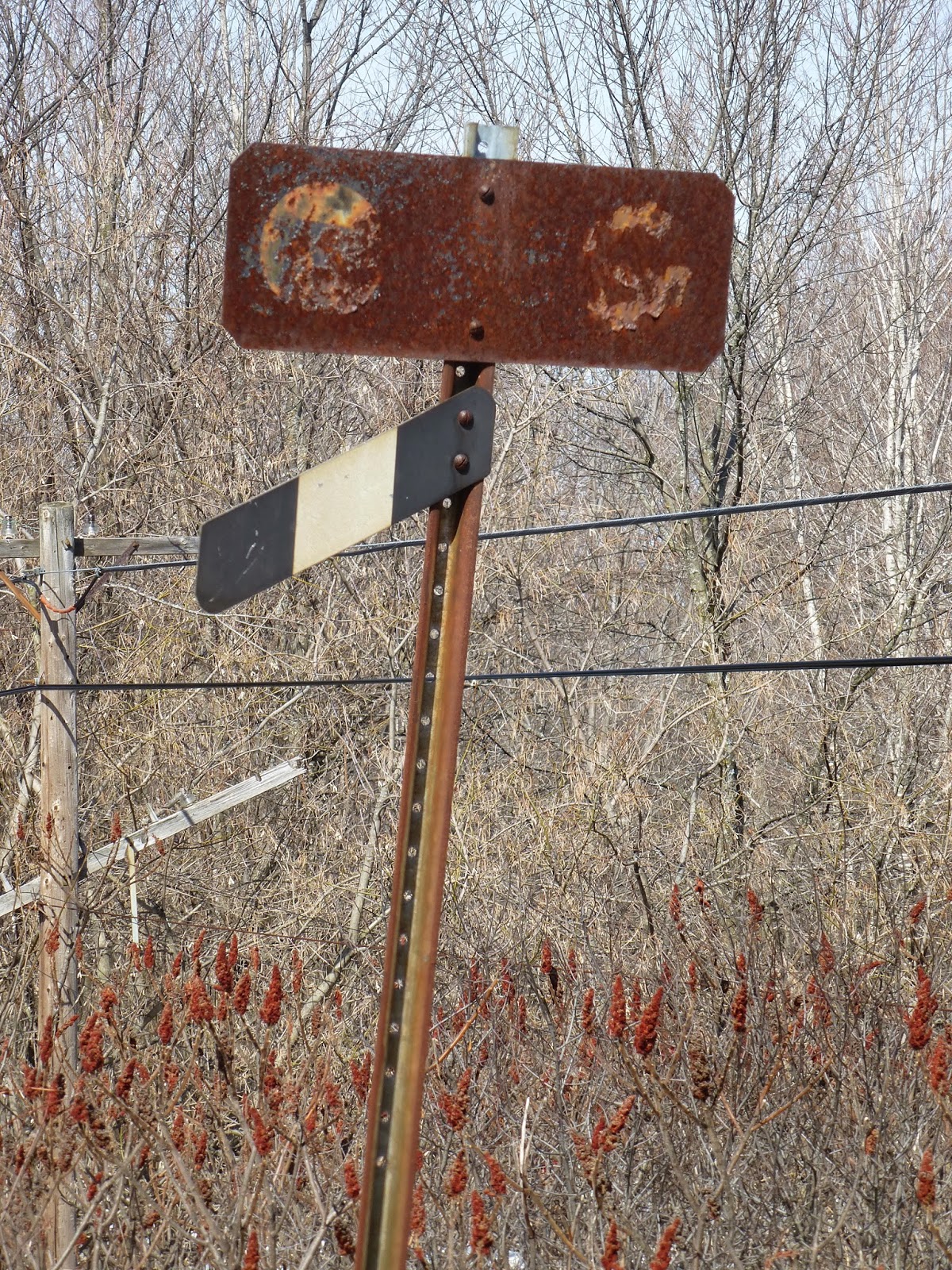 This is what the junction looks like today facing southeast. The snow-covered track is Beachburg while the clear section is the Renfrew spur. Notice the switch alignment. The spur has become the main line while Beachburg has become the turnout, so to speak. 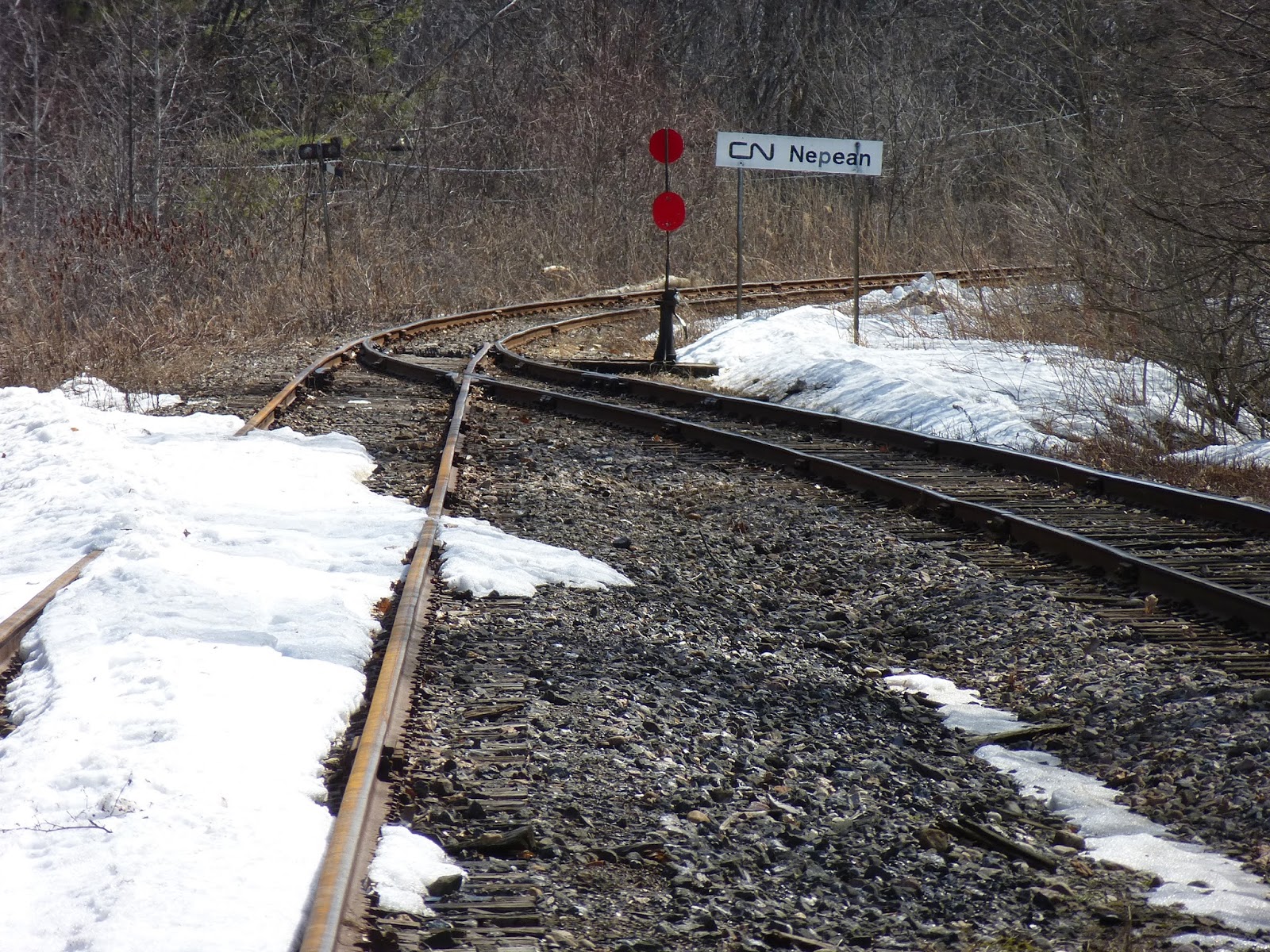 Here's one final look at the two lines after they head their separate ways. Beachburg curves in a northwest direction, headed for the Fitzroy Harbour area near the Ottawa River. The Renfrew spur, at a lower elevation, heads in a more westerly direction as it heads toward Kanata and Arnprior beyond.  Note the difference in the roadbed and the colour of the rails. It makes it hard to believe that Beachburg was once part of a transcontinental main line. 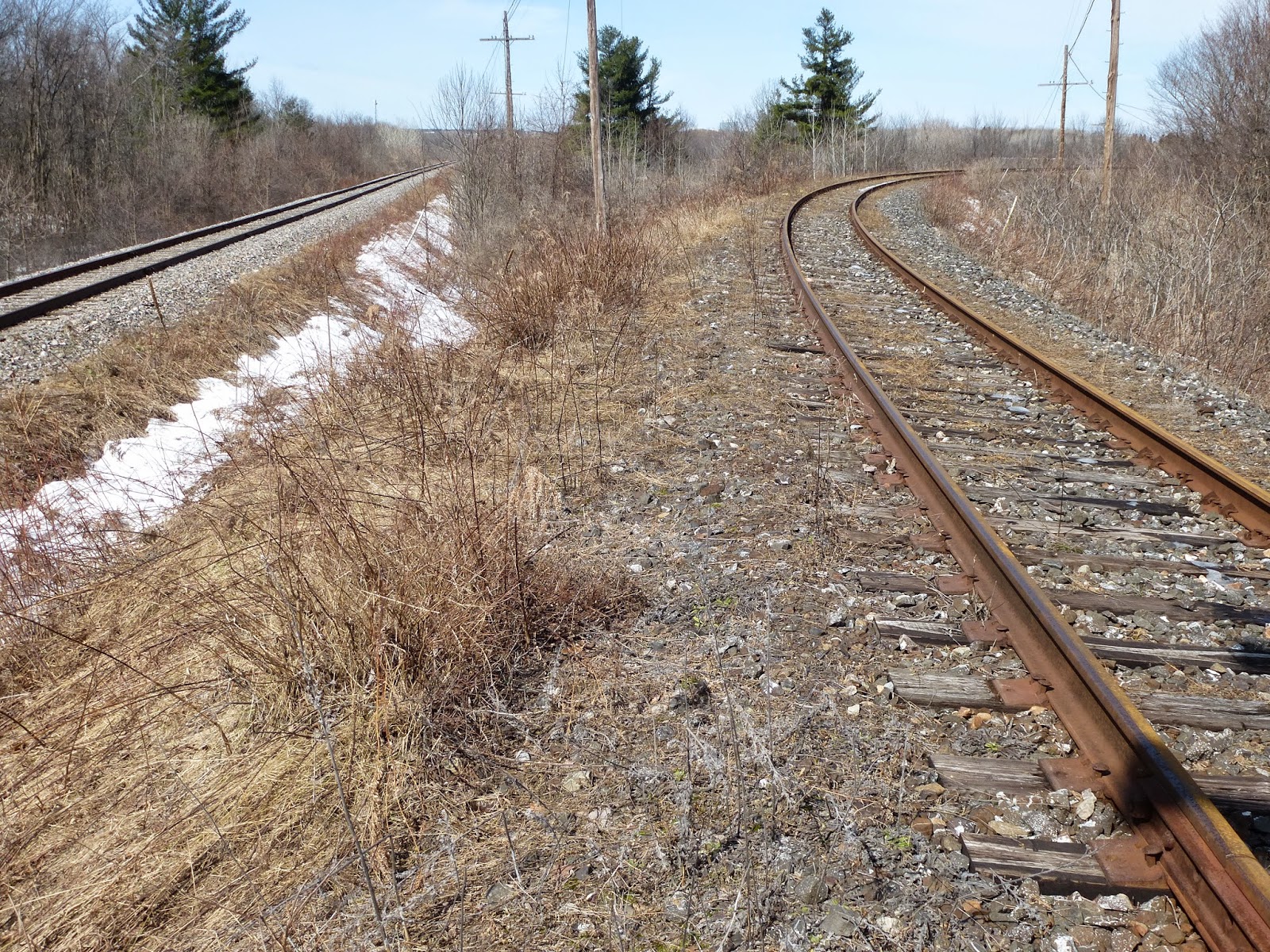 This junction might soon become nothing more than a name on a map, much like Bells Junction in Bells Corners, which once separated the Beachburg Sub from the old CP Carleton Place Subdivision. This junction once separated CN's main line from John Booth's Ottawa, Arnprior & Parry Sound railway. It was once the site of an overpass where the two lines met. Over the years, it has housed track maintenance buildings and other railways trappings. Today, it stands as possibly one of the final reminders of CN's former transcontinental operations in the Ottawa Valley.

MYSTERY SOLVED: You may recall that I was musing about the North American logo I spotted on a CN hopper in a previous post, A few surprises from the last year. A reader was able to clear up the mystery for me, which was greatly appreciated. To read about the North American logo, please check out the post in the link above. Special thanks to blog reader Nicholas for pointing me in the right direction.