Updated: A few surprises from the past year

As Beachburg Sub approaches its anniversary, I have been combing through photos of my adventures and came across a few shots that could only be described as surprises that I had yet to turn into grist for the mill. So, here goes.

The first shot was taken Dec. 23, 2013 in Sarnia. It was the product of lucky timing. I was shooting trains around Sarnia yard when I heard the whistle of an approaching train. To my surprise, a CSX local came curling around the Lambton Diesel roundhouse into the yard. I knew that CSX and CN had a few interchange points when I lived in Sarnia, but in the pre-Internet era, I never knew where these points were and when the interchanges happened. Standing on the platform of Sarnia station that morning, I was lucky enough to get a shot of two CSX GP38s pulling their interchange traffic into the yard, just in front of a few CN yard locomotives. I was happy with this shot because it captures the look of the two railways, a bit of the Chemical Valley and a small piece of the roundhouse. 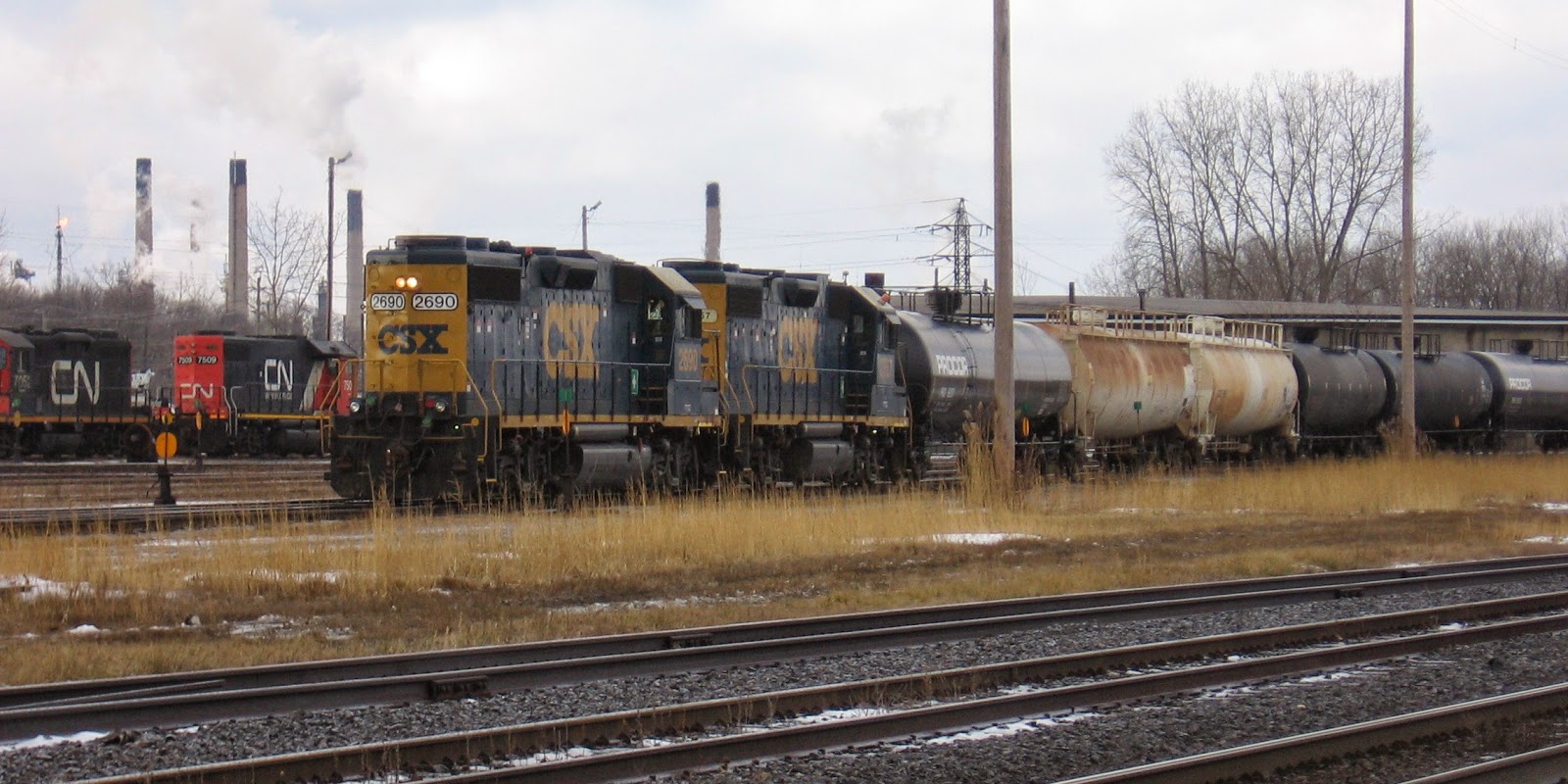 On the same day, I drove past a CN CargoFlow facility where a string of hopper cars was waiting to be loaded. One car caught my eye, because it had a mysterious logo on it that I had not seen since my teenage years. It was simply labelled "North American," which had me intrigued. So I took a photo of the hopper and went about researching what it was. Seeing the CNIS reporting marks, I assumed it was a CN car, which was correct (see note in italics below).

The car was painted in an early incarnation of CN's International Service scheme. Most cars with the CNIS reporting mark now look much like all other CN rolling stock, with the exception of the reporting mark. However, from what I can find online, the railway used the "North American" logo in place of the wet noodle the early 80s for its CNIS cars. From what I gather from a few message boards, these marks are for accounting purposes. This old scheme is not terribly common these days, as most CNIS cars have been repainted with the wet noodle look, but a few of the old North American cars are still obviously kicking around.

UPDATE: A blog reader pointed out to me that the North American logo in fact belonged to the North American Car Co., which leased cars to major railways. So, while I was partially right that this car was a CN hopper, I was also off the mark on a few points above. Thanks to blog reader Nicholas for pointing this out. 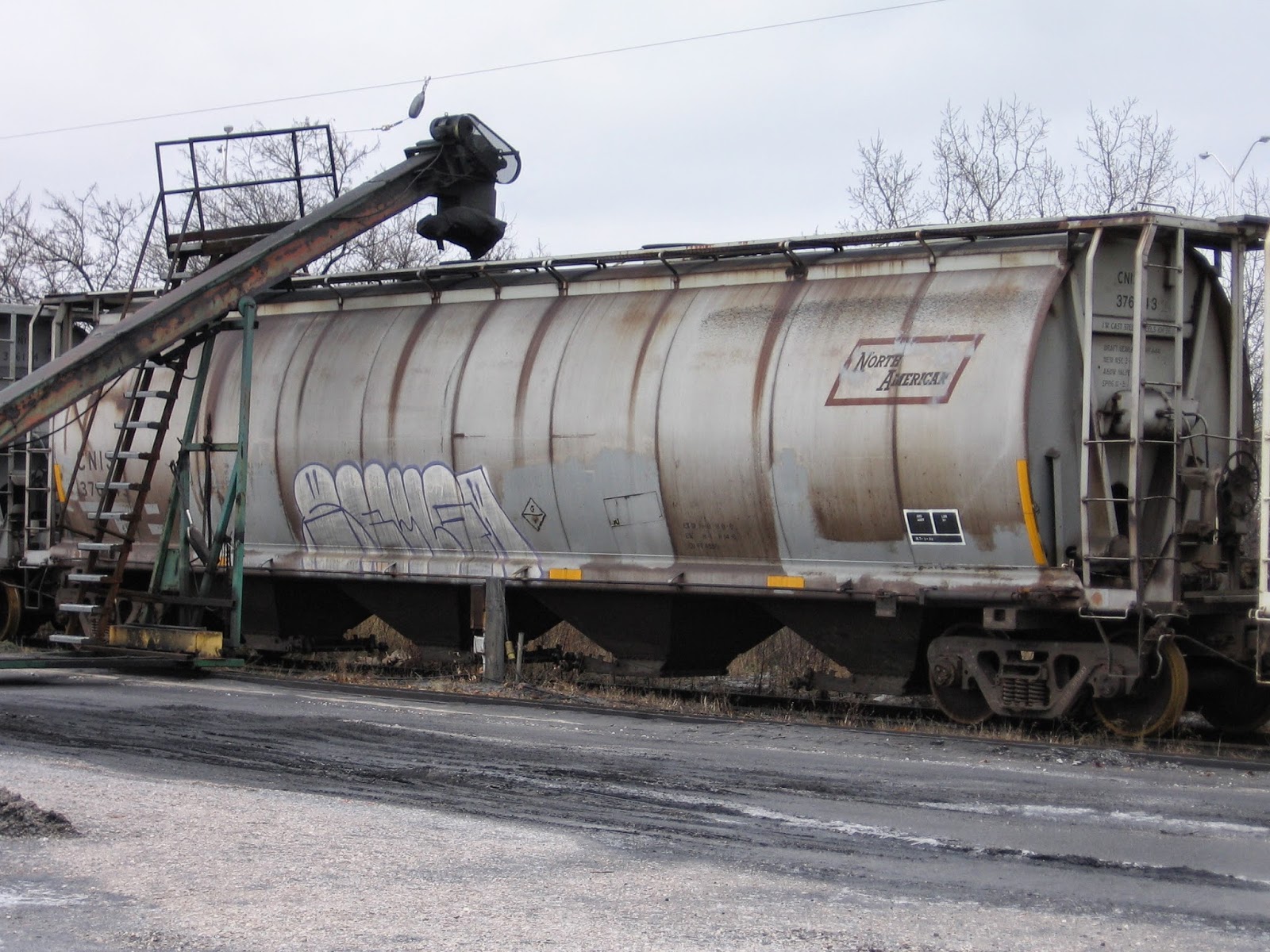 This past summer, I made my first trip to Ottawa's Walkley Yard, only to find it almost completely empty, save for a few pieces of rolling stock. Far off in the east end of the yard, I spotted two cars pushed up against some bumpers that stood out. As regular readers know, Walkley Yard is home to an old CN caboose and RDC9, both belonging to DAWX. I have taken quite a few photos of these two relics, since they are parked right next to a service road, making them easy photo subjects. On this day, the sun was shining brilliantly, making the old RDC look even more compelling. 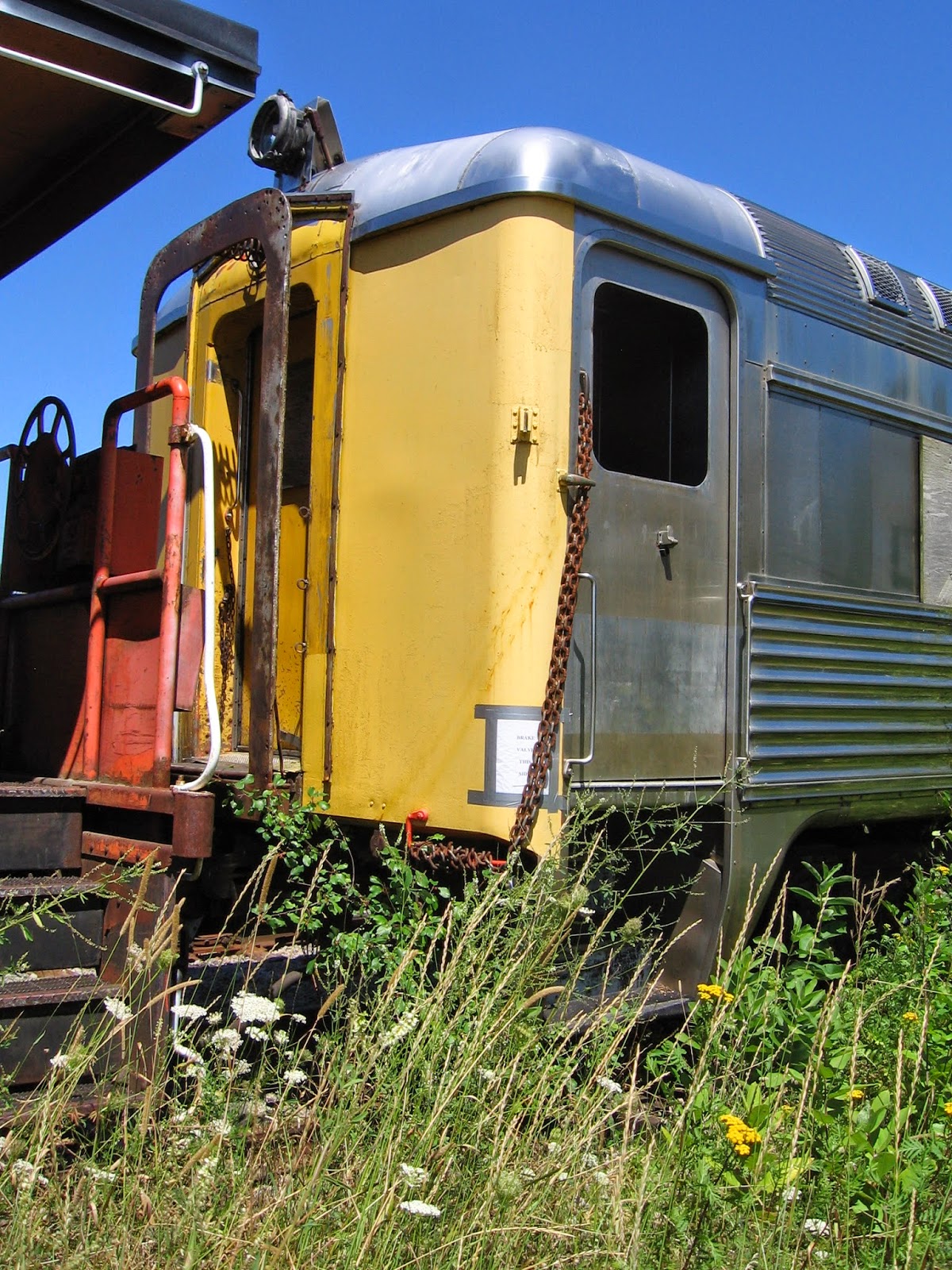 This past September, I made an early morning visit to Walkley Yard, needing a little break away from a hectic house. I was greatly surprised to catch CN's local assembling in the yard, which made for a number of great photos. I kept my distance on the service road, since the engineer and conductor were likely wondering who I was. I'm pretty sure the CN crews in Ottawa are not used to spectators. I was pleased with the shots I took that morning, since they captured a number of cool items, including an old RailBox boxcar, the old CN Millennium caboose and few others interesting pieces of rolling stock. Also, you can see the conductor in this shot, which was a bonus. Such is the state of freight trains in Ottawa these days that this shot comprises an incredible score to a local train watcher.

A nice selection of photos, Michael. The North American logo was also on some cars that CP used, such as 50-foot yellow insulated boxcars. We also saw NCHX cars at our local DuPont nylon plant with the logo...for years. Here's a similar car:
https://www.flickr.com/photos/101561334@N08/10588554454/

Thanks for the added information and links, Eric. I must say, I found any information on the "North American" logo hard to find, to say the least.

Mystery solved! Thanks Nicholas. I didn't realize the logo belonged to a car leasing company. That's why I love putting questions out to this blog's readers. They always teach me things I didn't know.

Nicholas is correct; North American was a major freight car lessor in the 1960s-1970s, folded into GE in the late 1980s?

The CNIS reporting marks and NACC logo don't really have any direct relationship, just that this particular series was leased and lettered for the leasing company.

The CSX job in the CN yard in Sarnia is a daily occurrence. CSX used to interchange traffic with CP in Chatham, operating a regular train of interchange traffic (using CP power) between Sarnia and Chatham, which would then run through to Windsor over CP. This was cancelled and CSX applied to discontinue service south of Sombra. At about the same time, since all traffic is now interchanged with CN in Sarnia, CSX started running a daily transfer job directly into the CN yard to pick up interchange traffic and largely abandoned the old interchange sidings.

Thanks for your comments Chris. That information about the Sarnia Sub is spot on. I know that, in the 90s, the CSX interchange trains between Sarnia and Chatham ran with CSX power, but there were more recent instances where CP power was used. I have seen a number of photos of CP power on the Sub. I wish I had seen this in the 1990s. That would have been great to see in person.