A double-decker city bus collided with westbound Via Rail Train 51 near Ottawa's Fallowfield Station during the Wednesday morning commute in Ottawa's south end. The horrific crash killed five bus passengers and the bus's driver. Thirty-four more people were treated at local hospitals for various injuries. Most reports said 11 people were in serious or critical condition. No one on Train 51 was hurt. 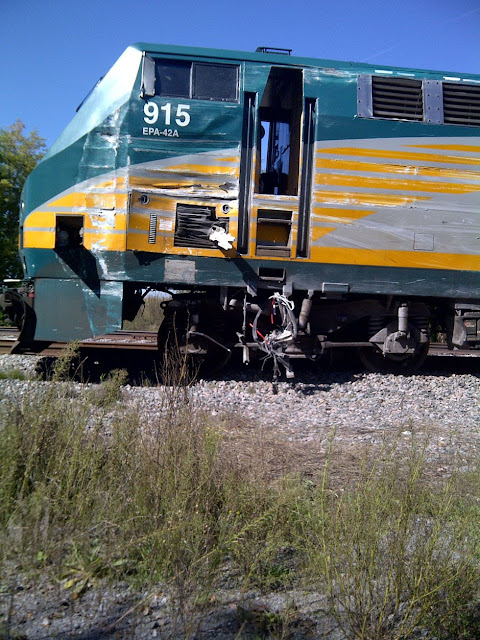 Transportation Safety Board of Canada photo of P42 915

The train was pulling into nearby Fallowfield Station in the southern Barrhaven neighbourhood along Via's Smiths Falls subdivision. Train 51 had a four-car LRC consist and was being pulled by P42 915. The one saving grace, if there is such a thing in such a tragedy, was that the train had already slowed down significantly as it approached the station, meaning its impact with the bus was not as severe as it might have been had the train been travelling at a higher rate of speed. On the other side of Fallowfield Station, Via trains gear up quickly and speed through the next several level crossings on their way southwest toward Toronto. All of these crossings are equipped with signals and safety barriers. 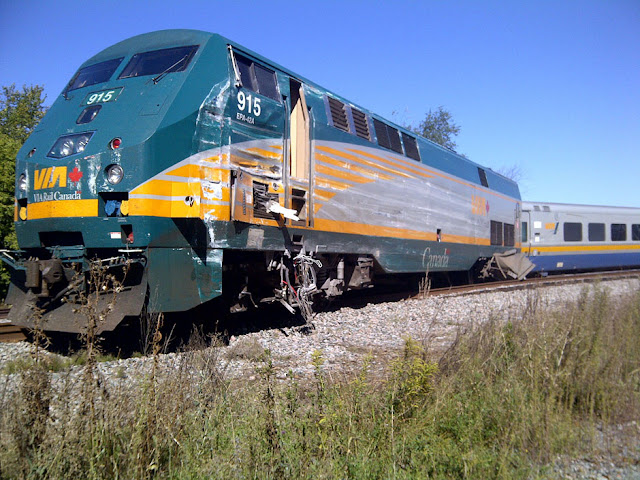 Transportation Safety Board of Canada photo of Via Train 51, Wed. Sept. 18

Local radio conversation has touched on the safety of level rail crossings along lines with trains travelling at high speeds. This speculation is partly the result of a long-delayed plan to build an underpass along Woodroffe Avenue, allowing traffic to pass under the track. I still think it's premature to begin a debate over the safety of  level crossings since we do not know what happened. Most motorists and bus drivers obey the rules when they approach such crossings, so any suggestions about rail crossings being inherently unsafe are unfortunate in the early aftermath of this tragedy. 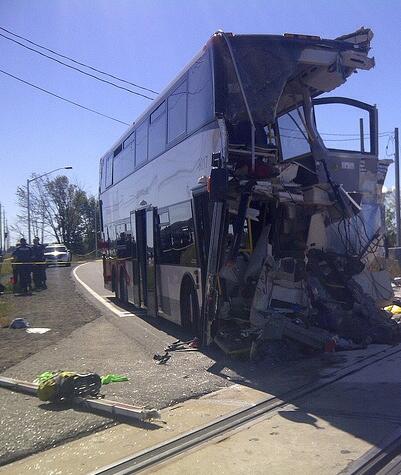 Rather than provide any further thoughts on this tragedy, I will simply refer you to CBC Ottawa, the Ottawa Citizen or other local media like the Ottawa Sun or CTV Ottawa. You can also read the Via Rail statement here. Once more is known, I will consider whether I have anything worthwhile to share. Until that time, I will only say that my thoughts and prayers will be with those who were injured and those whose loved ones died in the accident.

I was planning to post a story this week that focused on this stretch of the Via Rail Smiths Falls subdivision. I will likely push this post back, as I think it would be inappropriate.
Posted by Michael at Wednesday, September 18, 2013

Thank you for posting this update, Michael. I appreciated your responsible tone and comments. A tragic event for all of Ottawa and all of Canada as well.