This past weekend, I took a quick trip to Walkley Yard and managed to catch the CN crew assembling its local. The trip ended up being a good chance for me to tie up some loose ends and address some issues brought up by my readers. You can see the local below, being pulled by GP38-2W 4800 with the conductor walking alongside the consist early morning Sunday, September 8th. A couple of points to mention. The first is the RailBox boxcar to the left of the local with the original paint scheme. The second is that the geep is in the safety scheme. I'm amazed that whichever locomotive is assigned to Walkley is usually in this scheme.

As the local crawled toward my vantage point, I managed to catch one of CN's two cabooses in service in Ottawa, this one trailing directly behind the geep. The caboose, numbered 79834, is a curiosity for a number of reasons. The most obvious point is its truly awful paint job. The second point is the word "MILLENNIUM" stenciled on the right side. Doing a little research, I found out that this car was built in 1976 and was a CN caboose originally. It became part of the Ontario L'Orignal Railway (OLOR) in 1996. The car, numbered OLOR 2000, became part of the Ottawa Central when the OCR's parent company bought the OLOR in 2000. When the OCR was purchased by CN in 2008, the caboose reverted back to its original CN 79834 numbers. The paint job was obviously not a priority. Here's a shot of the car in its OLOR days. The CN has one other caboose in use in the city, which you can see here. 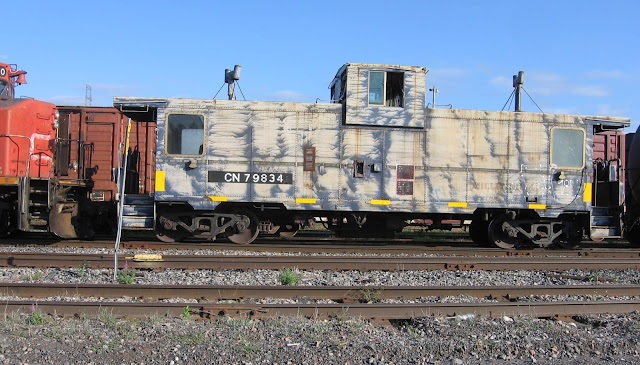 In a recent post, I took some shots of an old RDC and old CN caboose that were parked on a wreck track. I was asked about the car that was hitched to the RDC. I made sure to go back and take a proper shot of the car. As suggested, it appears to be a steel coil car. I'm not sure what it was doing attached to the RDC and the former CN caboose. 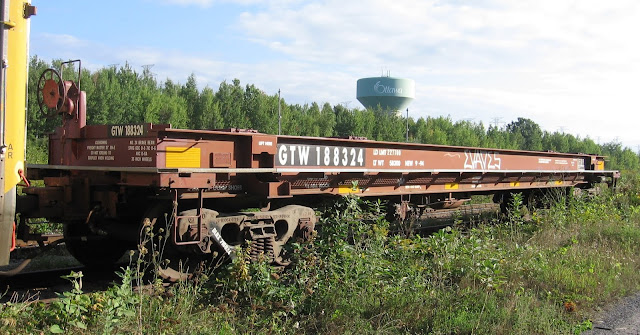 Finally, I submit for your approval, a CSX waffle-side boxcar. This time, I am reasonably sure that I am correct in identifying this as a waffle side car, given that it has vertical slats and horizontal notches. There was a string of cars like this in the yard on the weekend. Can you see the hasty plywood repair made to the car? Seeing a few CSX cars in the yard made me nostalgic for the old CSX Sarnia Subdivision. I have to get back there and get some new shots on that line. 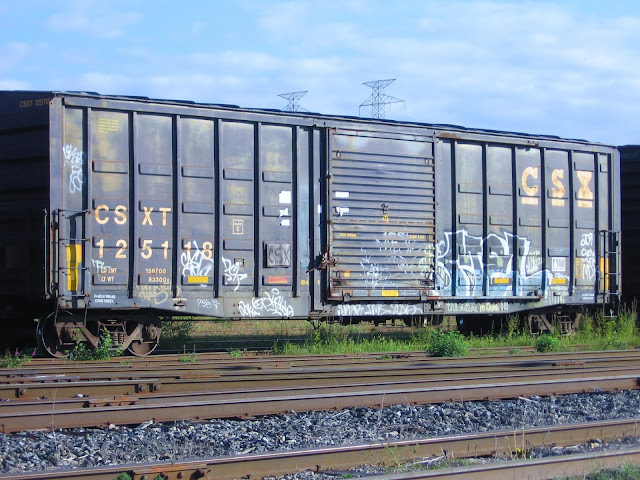 This weekend in Ottawa, folk legend Gordon Lightfoot will play a set to close out the Ottawa Folk Festival. I have bought a ticket since I grew up listening to Lightfoot's music. I look forward to hearing the Canadian Railroad Trilogy live. Should be fun!
Posted by Michael at Friday, September 06, 2013

Man, that is one fugly caboose.

Michael, thanks for being intrepid and searching out that coil car. The waffle-side was a bonus! Apparently I saw CN 79834 in Portage la Prairie in 1980 - I'll have to check my original notes!

And Gordon Lightfoot? Great finish for sure!

Thanks for posting these.
Eric

And perhaps others as well.
Eric

Thanks for the comments, gents. Yes, 79834 will never win points for appearance, but it does at least make train watching here a little more interesting. Good catch, Eric. Glad to see it was of some use before it began its stint as the world's ugliest caboose.