I seemed to have hit a sweet spot in my previous post about the history of the venerable GP9 locomotive. As I mentioned in that post, this old relic is fast disappearing from most major railways, given its age. The last GP9s produced in Canada came off the line at the old GM Diesel in London, Ont. in 1963. CN and CP have used them for decades, although there are none left on CP and only a few dozen left on CN rails.

I shared a few photos of my meets with these engines over the years, including on the CP, CN and even the Goderich Exeter Railway. After I published that post, I received interesting feedback from a few fellow bloggers in appreciation of these geeps.

It occurred to me that perhaps my generation of railfan will wax poetic over these first-generation diesels the way previous generations bemoan the loss the steam locomotives after the late 1950s and early 1960s. I have to admit I don’t understand the fascination with steam locomotives at all, given my age and my lack of experience with them trackside. However, given my fond memories of old GP9s and even SW1200s, maybe I’m not all that different from steam fans after all.

One of those who seemed enthused about my GP9 retrospective is Steve Boyko, author, poet and prominent rail blogger extraordinaire. Most people who come to this blog will know Steve from his long-running railway and photography blog, traingeek.ca. It was one blog that directly influenced my decision to start The Beachburg Sub. Steve was kind enough to share a few of his own shots of GP9s from his time trackside, which I am pleased to share below.

I’ll start with a shot Steve took in Winnipeg, where he lives. The descriptions below the photos are Steve’s, not mine. Read on: 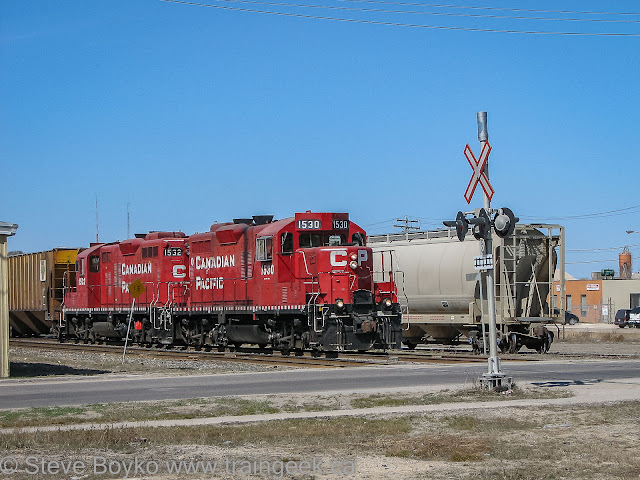 CP operated many GP7s and GP9s in Winnipeg in the first decade of the 21st century, in local switcher service and local yard service. They frequently operated in pairs, like these two about to cross Plinguet Street, south of Whittier Junction. 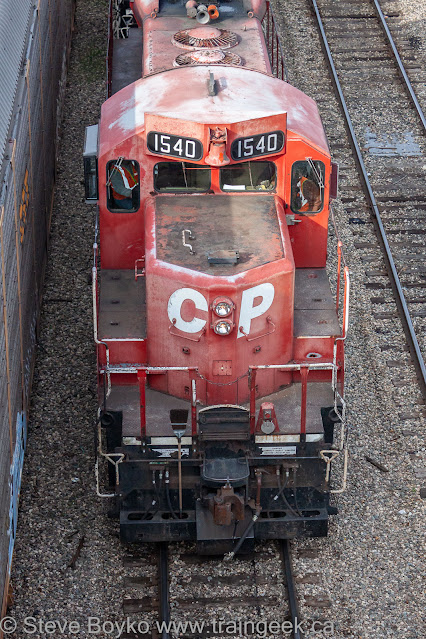 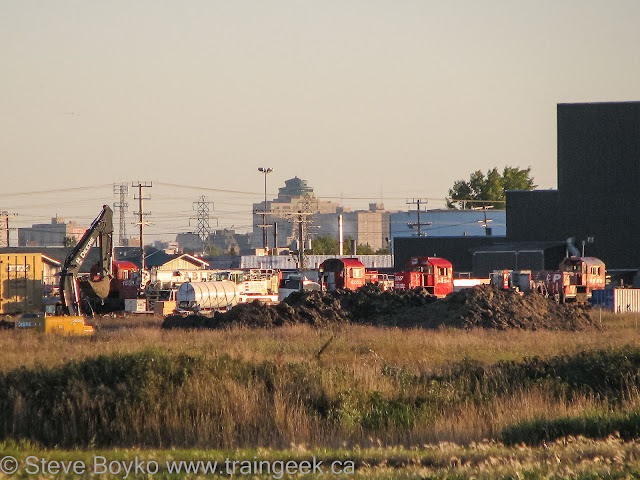 Many CP switchers met their end here in late 2009. A scrapper used a siding in Fort Garry to scrap quite a few locomotives over a few months. I documented many from a distance, including this massacre of four CP GP9s – 1558 and 1556, bracketing two SOO GP9s, 4202 and 4204. 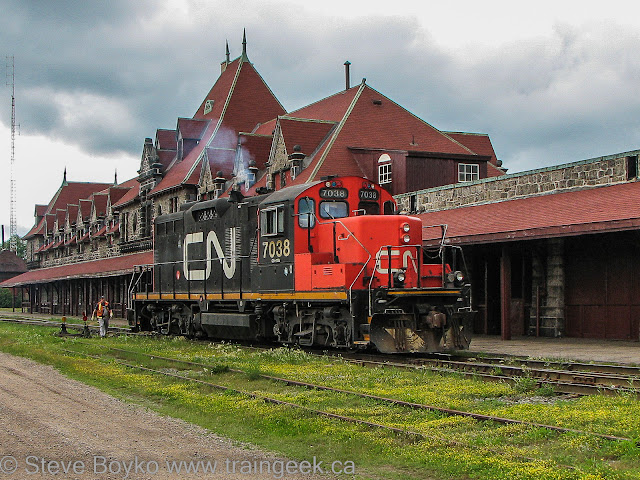 You might wonder why a CN GP9 is at the famous McAdam, New Brunswick train station – a former bastion of CP power. This line has been owned by shortline NB Southern Railway for quite a while, and they leased a few CN GP9s for local switching in Saint John. Occasionally, one would be put on the Saint John-Brownville Junction freight for extra power. However, they are not permitted to cross into the U.S., so they would be dropped in McAdam. When I visited McAdam on July 19, 2008, 7038 was being used to switch the yard. 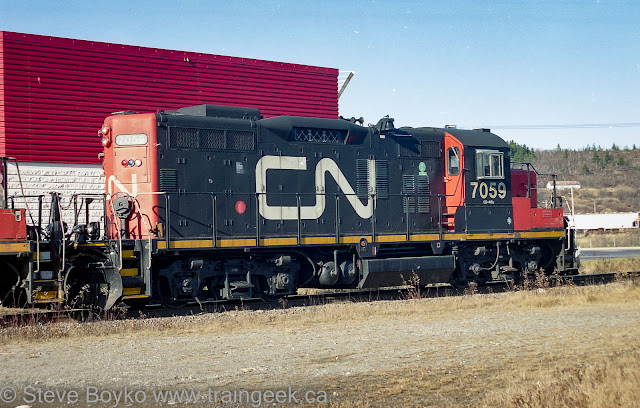 This is a very pedestrian shot of CN 7059 passing the Staples store near Island Yard in Saint John, coming back from perhaps switching the Irving refinery. I include it because I have one of the number boards that used to grace this locomotive, which has since donned Cando colours and a new number. 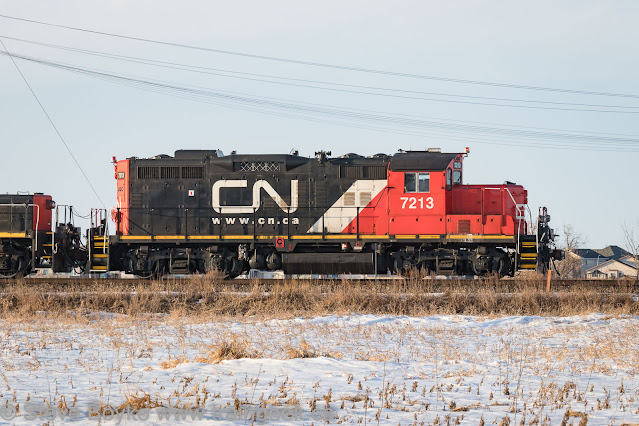 CN often used a pairing of GP9s and a slug for local switching in the Winnipeg area. Here are two pairings, with 7213 at Transcona (with modern CN.ca paint scheme) above and 7254 in Winnipeg below. 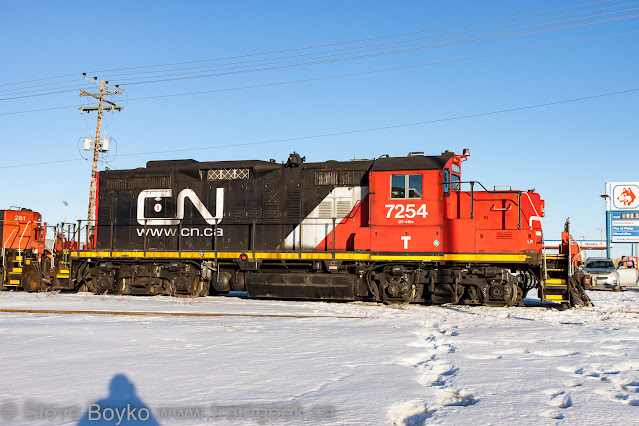 Here's an oddity below. Read Steve's caption of this scene below the image. 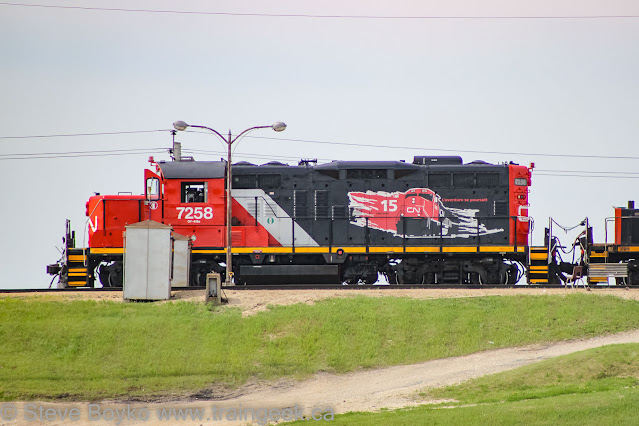 I’m not sure why this GP9 was on top of the hump in Symington Yard in Winnipeg. Typically, hump locomotives were GP38-2 locomotives at this time, but for whatever reason, 7258 and slug 268 were up high. 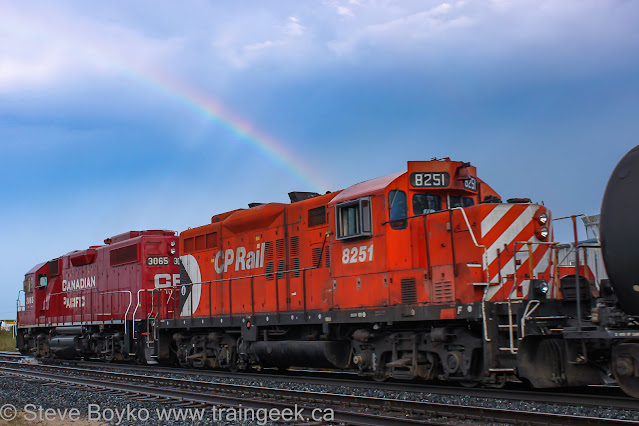 For a long time, CP 8251 was one of the very few active locomotives around Winnipeg still bearing a multimark. Here a rainbow graces the scene after a summer storm. CP 8251 was retired in 2013 but has been leased to Viterra to serve a grain elevator.

My thanks to Steve for sharing these photos. It’s a real treat to feature photographs and information outside my usual haunts here in Ottawa and southern Ontario. In keeping with this post’s theme of GP9 photos, I’d like to share three additional GP9 photos that didn’t make the cut in the previous post.

The first is an old shot my Dad took at the GEXR yard in Startford in the early 1990s. Note the faded Shakespearan name "Falstaff" on the lead engine, in appreciation of the railway's hometown. 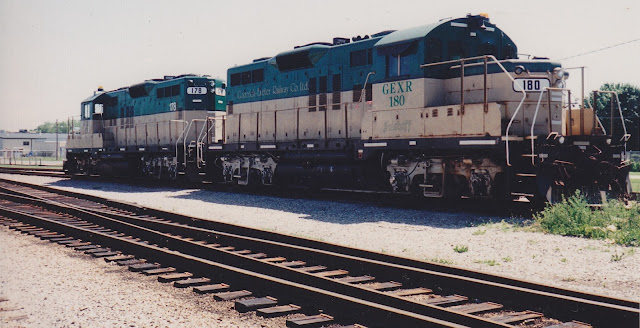 A few years ago, Eric Gagnon, author of the equally acclaimed Trackside Treasure blog and several railway books, shared this photo print with me of GEXR GP9 177 leading a string of old EMD power in switching the salt mine on the Lake Huron habourfront in Goderich. Date unknown, but it appears to be a 1990s shot. 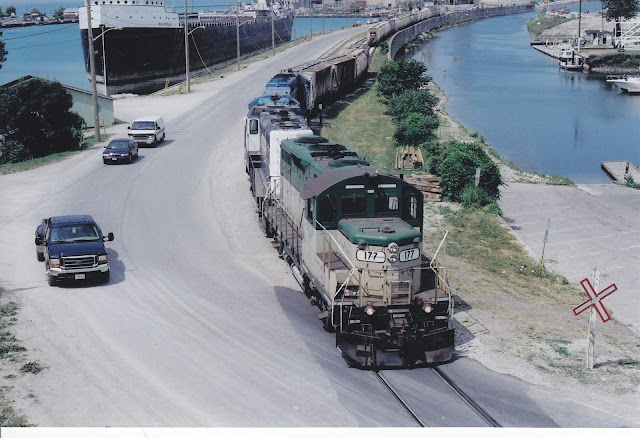 Finally, I'll add one last shot of my own that I did not manage to squeeze into my original post on these engines. Here's a great shot of GP9 720 and slug 223 leading 4761 in Sarnia Yard in August 2014. 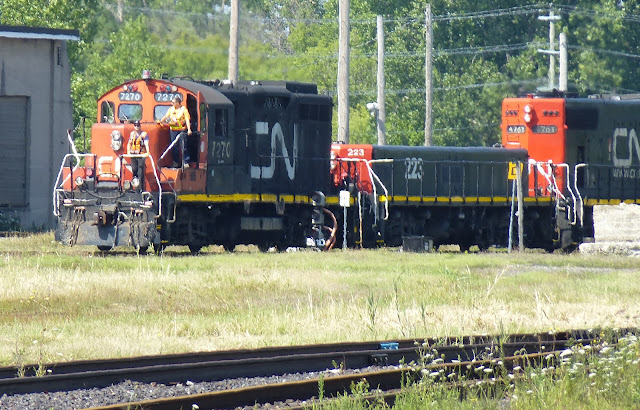 So that just about wraps up my tribute to the venerable GP9. I am also working on a similar post about the equally venerable SW1200 and its family of switchers. Stay tuned for that one a little down the road. My thanks to Steve Boyko, the original Train Geek, for sharing his photos this week and his contribution to the cause on this blog. And thanks to Eric Gagnon of Trackside Treasure. It's been years since he shared a bunch of prints with me. I finally have the chance to share one of them.
Posted by Michael at Thursday, October 13, 2022

Thanks for the tip of the hat, Michael. The world needs more GP9's and I think you're right that future generations will wax about them in years to come. They have had a remarkable life in many different and unpredicted uses! Steve's photos of GP9's in weird places were especially mind-bending. I mean, McAdam??

Thank you to both Eric and Eric for the comments. the GP9 seems to have resonated with a few of my fellow railfans. I grew up with them around Sarnia and still enjoy seeing them in Ottawa from time to time.