I will admit that I have mixed feelings about CN's weekly train out to Arnprior, CN 589. While it's fun to catch this train, as you almost always have to earn it, it seems like it's sometimes the only thing us rail enthusiasts in Ottawa want to talk about.

Recently, I was taking my daughter to soccer and heading down Carling Avenue around the intersection with Herzberg Road in Kanata, when I saw CN 589 heading east back toward Walkley Yard after making its weekly run to Nylene Canada. My daughter in the passenger seat was able to capture a few images from our vantage point with an iPhone. Granted, these are not ideal shots by any means, but any sighting of this train is always a plus in my book.

You can tell my windshield has seen its share of bugs. The image is a bit grainy and blurred, but you can see the usual two-engine consist of a CN GP38-2 and the former GATX GP38-2 leading the way home. That cyclist nearly ruined the shot, but we just managed to squeeze the train in. There are five tank cars in tow, although the much-talked-about GT caboose is nowhere to be seen. I've noticed on Facebook in recent weeks that the caboose has yet to make another appearance in the west end, which makes my recent meet with it all the more special. 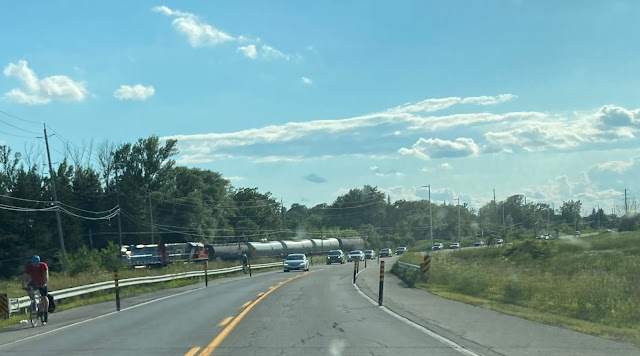 This (above) might be the second best shot, but it's all relative when you're shooting through a bug-stained windshield with an iPhone. Here's a tip I've learned about iPhones. They are perfectly acceptable to use if you are fairly close to a train but the shots pixelate in a hurry any time you zoom in, especially with the older models. I use them in a pinch when I don't have my proper camera, but I always resist the temptation to use the zoom for this reason.

In recent weeks, people that follow the weekly Arnprior Turn have been wondering why they haven't been using the Grand Trunk caboose. I was in the area of Walkley Yard and managed to capture a fleeting glimpse of the caboose in the yard in late August. 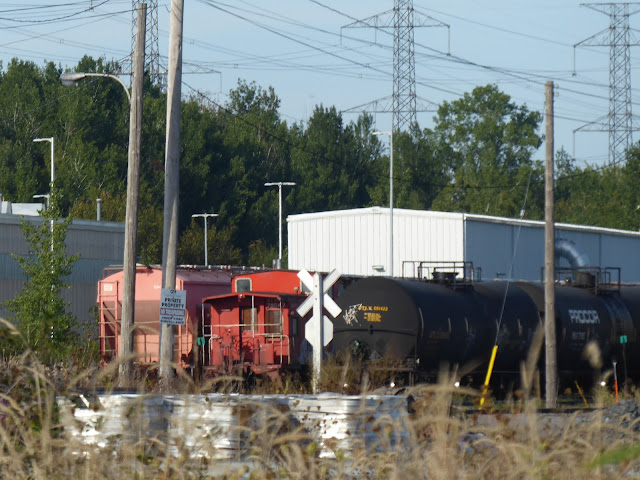 This image was taken at the end of Albion Road on public property. I know some people still make their way into the yard on the service road that is an extension of Albion Road. I can's stress it enough that this is not a great idea. That road is more than likely on private property and is not a public road. Don't risk it.

While I was at the end of Albion, I had a fairly clear view of the new O-Train diesels that will soon be plying the Trillium Line all the way from Bayview to the southern extension past the airport. From an aesthetic point-of-view, these new units are much better looking than the electric trainsets that make their way east and west on the Confederation Line. I won't get into the recent mechanical failures and technology failures that took the O-Train out of service yet again. The best thing going for the O-Train right now is not that many people take it, as most public servants continue to work from home. The uproar over this malfunctioning line would be a lot louder if more people actually used it. But, for now, here's one of the new diesels. 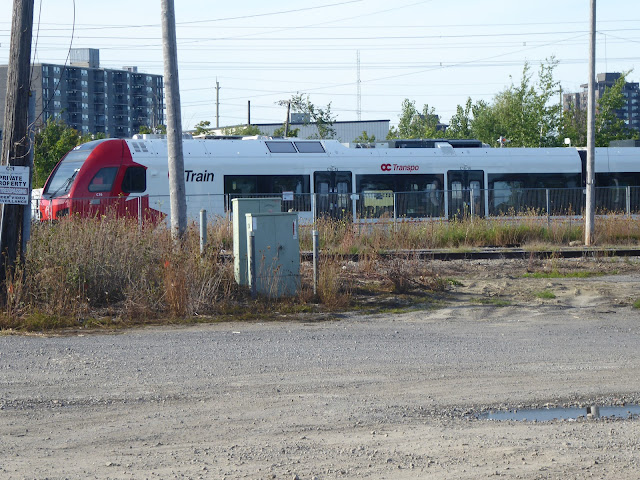 I should mention that, with the ongoing construction happening on the Trillium Line, which is behind schedule, one of the developments that will affect railfans is happening in Walkley Yard. The city is building a maintenance facility in Walkley Yard that blocks much of the view railfans once had from the Bank Street overpass. This is unfortunate from our perspective, as this overpass did once offer a reasonable view of Walkley Yard from a safe, publicly accessible vantage point. This means you will not be able to get a view like this anymore. 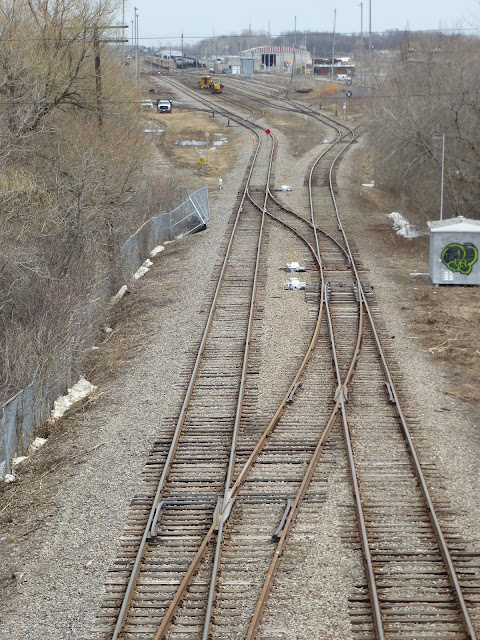 This shot, from 2017, can no longer be duplicated, as there is a large maintenance facility on the left track, which blocks much of the view of the yard. Thankfully, the vantage looking west toward Walkley diamond is still unobstructed, so that area is still in play for photographers.

Recently, I spent some time in Waterloo, Ontario and saw its own light rail system, dubbed Ion, in action. My friends in that area say the system runs very well and has rarely had any operational problems since it began operating on a full-time basis. I will explore this system in a future post.

Finally, the big stir this summer in Ottawa was caused by the Canadian Pacific bringing some business train equipment to town, behind its F-series units. Some have called this the Royal Canadian Pacific train, which I'm not sure is entirely accurate. I did managed to snap some shots of it from Conroy Road from quite a distance, thanks to the zoom on my camera. The CP police officer, who told me he was from Regina, said the train was in town so the railway could entertain VIPs as part of its sponsorship of the CP Women's Open golf tournament at the nearby Ottawa Hunt and Golf Club. 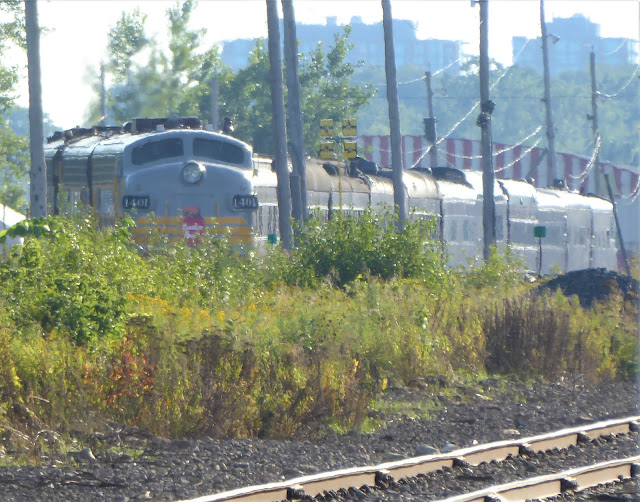 The next day, August 29, the train was scheduled to head back west and leave Walkley Yard in the morning. A group of railfans waited at Fallowfield Station, but the train had not shown up yet, as it had obviously not been given clearance between Via's many corridor trains to and from Toronto on the Smiths Falls Sub. I stayed as long as I could, sacrificing my lunch hour, but I only saw Via Train 52. I did like that it was being led by a wrapped F40PH-2. I don't have that many shots of these old warhorses in the wrap design. It was better than nothing, but I was quite disappointed to have missed the CP heritage equipment. Oh well. 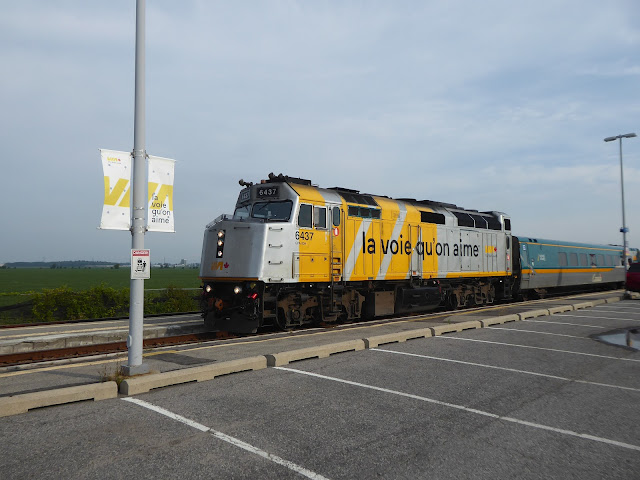 One last shot of the train beside the station as the passengers boarded. 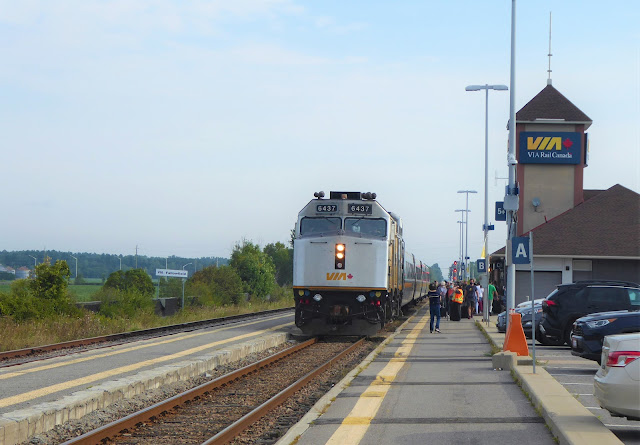 Those are a few observations from my limited railside adventures this summer in Ottawa. Much of my material for further posts came from outside Ottawa in recent months. Stay tuned for some material from Waterloo, the GTA, Kingston and even a few items from the Sarnia area. And with an imminent trip to the United States looming, I hope to add some railway photos from the heartland of America in Indiana. Stay tuned.

nice catches of the Arnprior run! I continue to miss it, however have some paternity leave coming so I am hoping to swing down there. As a potential heads up, I know there is some repair equipment around the bridge over the 416 just off baseline but I don't know if they're doing work around the track, the intersection or in the bush (or some combination).
Also too bad you couldn't catch the vintage units on the way out of town. I am shocked as I hadn't heard anything about that in the first place! I would have popped over to Fallowfield or maybe off Moodie with my son for his first taste of railfanning!

Thanks for dropping by, AJ! I was wondering if you hung around after my sabbatical. I would always encourage parents to start their kids off right, so I fully endorse your plan!

I'll admit I have not been around anywhere near as frequently, however thats more because it has been super busy as of late. Kids for you!!!! That said I am happy your back and posting as they've been fun reads.
Yeah my son is just over 2 and loves trains. He probably plays with his Brio everyday which has compelled me to make some custom units with my 3D printer (working on a CN GP38 right now actually) when i get a few free minutes each day. I haven't had a chance to get him trackside so I am hoping to do that before the snow hits. Worried he would be freaked out about the noise (the sound of the vacuum upsets him for example). Any advice on that? I know some people have used those kids headphones - is that the best route? Or makes more sense to keep him a distance away where he can see but the sound isn't as bad?