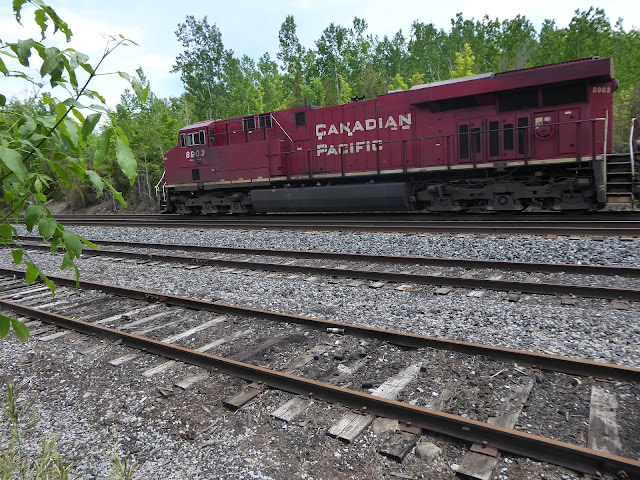 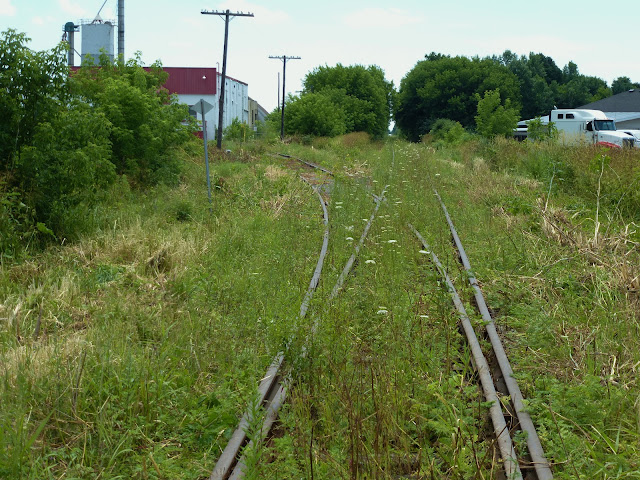 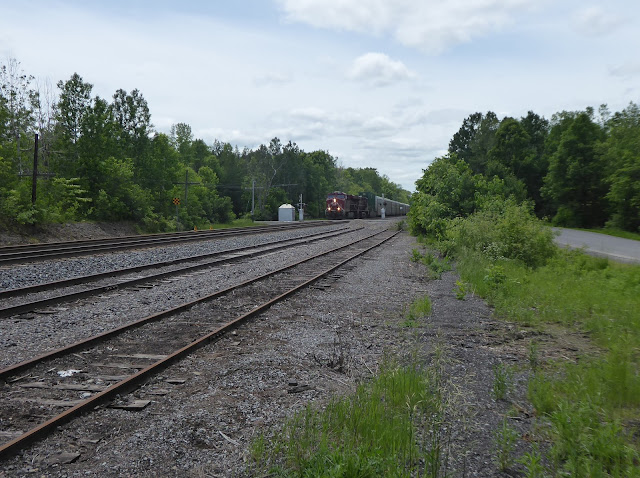 Anyway, I’ll save most of my shots of the train for next week, as there are a few more points I wanted to bring up that didn’t fit the theme of this post. Stay tuned.
Posted by Michael at Tuesday, June 18, 2019

A bit over a year ago I was visiting a friend north of Shannonville. I crossed over the CP line and it was a single track in that spot I think.

My guess is that theory is right in that it is too time consuming to pull out however many miles of double track are present, but then why pull up the Chalk River Subdivision?

Interesting that the city is putting rails back onto the Prescott sub for the extension of the Trillium line. How convenient would it have been if the full line all the way to Kemptville was still intact. Food for thought!

I have seen trains on both the north and south tracks at Beddel. I never really put much thought into it, or I would have made a mental note as to which track and when. Then again, I also always wondered why the Winchester Sub in general wasn't overly busy....I mean its their mainline? You'd expect it to be pretty steady.

Yes, Keith, agreed. I've been harping on the short-sightedness of ripping up the old remnants of the Prescott Sub in Ottawa. There needs to be some sort of incentive program to prevent these lines from being removed. They have many programs in the States that prevent this from happening. Canada is way behind the times.

AJ - I think the volume of traffic on the Winchester Sub has to do with where CP's traffic and revenues lie, which is mainly out west in the prairies and into BC. This railway obviously still sees the benefits of having some through traffic to Toronto and Montreal. That is what most people likely see on this track -- transcontinental freight. I would venture to guess that the volume of the railway's business that originates in Eastern Canada is very small.

Your likely right on that Michael.
I guess I just was under the belief that they had more transcontinental and Montreal/Toronto business than it appears to be.

The latest rumors (only from two sources, neither who work for CP) I've heard is that they've completed the survey on making it single track and in the next year or two.

Closer to Smiths Falls, I've noticed that they are replacing the search light signals with Darth Vaders in the south track.

That would make sense, since this stretch clearly does not need two tracks. Still though, you always wonder what the impact will be when you remove track. Ottawa is only now relaying rail on the old Prescott Sub for its commuter rail in the city's south end. How much easier would it have been if the roadbed was maintained for rail?

The one time I really saw a train here it was headed westbound on the North track.

I work at the Hylands golf course beside the remaining section of the old Prescott Sub and have been watching the work thats been going on. Looks like the existing bit of rail by the golf course along with the pathway by the Leitrim bus station will be ripped up and levelled for the expansion of the O-train.

I would imagine they are ripping it up to make way for new rails, roadbed, signals etc. that will be able to handle the O-Train. I can't imagine what's there now is of any use, since it's been idle for more than 20 years.

The Winchester Sub is OCS with ABS signals for following trains. The tracks are set up for directional traffic which is why 95% of the time you'll see all trains in one direction on the same track. When they run against signals, you'll see them on the other track.
For CP to have their MAINLINE still being OCS controlled in 2019, it tells just how little traffic is there and how they just have not seen the point of upgrading to CTC.
CN has NO track in Canada with ABS signals.

Great info, thank you. It makes sense that it would be OCS, since there are, by various estimate,s only about 7-8 trains a day on that sub. As I mentioned, it seems like much of this traffic is the last leg of transcontinental freights rather than eastern originated traffic.

I get the general impression that CP may be anticipating more traffic in the future. Given how they are pushing it already with train lengths, any new container contracts may push them over the edge, forcing them to schedule a new run out of Montreal. Unfortunately CP doesn't have the branchline network or eastern reach that CN historically had, so inevitably, carloads in eastern Ontario for them will be lower.

I hope you're right about new container contracts. I know the railway was boasting of getting new contracts with former CN customers a few months ago.