To honour Via Rail Canada’s 40th anniversary, I am sharing some of my favourite Via Rail memories from my numerous adventures along the Quebec City-Windsor corridor. Last week, I shared my first 10 memories. Here are ten more.

11. It’s been three years since I last took the train. The last time I was on a Via Rail train was in 2015 when I had to go to Montreal for an appointment. The reason this memory sticks out is that it was the first time I had been away from my young family (my oldest daughter was three at the time when my youngest was nine months). As much as I missed my family, it was such a peaceful day! That day afforded me many rail memories, which you can read about here and here.

12. This is not really my memory, per se, but a story that was related to me by someone who used to work as part of Via Rail’s staff at Union Station in Toronto. I won’t get into too many details, to protect the innocent, but this was the story that was told to me. My contact was part of a crew whose duties included loading baggage cars and helping people on the platform in the train shed. One day, a few employees were bringing a casket to a baggage car so it could be transported somewhere for a funeral or memorial service. For whatever reason, something went horribly wrong and the casket tumbled from the platform onto the tracks, body included, obviously. I can’t imagine how this would be explained to a supervisor. I also can’t imagine the process of fixing this situation.

13. In 2010, a few days after I married the love of my life, my wife and I boarded a train from Ottawa to Quebec City for our honeymoon. For years, I had been saving Air Miles with no particular end goal in mind. One of my main responsibilities in the lead-up to my wedding was the plan the honeymoon. In a stroke of genius, I redeemed all my Air Miles and brought Via Rail gift cards, which I then used to purchase two round-trip first class tickets to Quebec City. 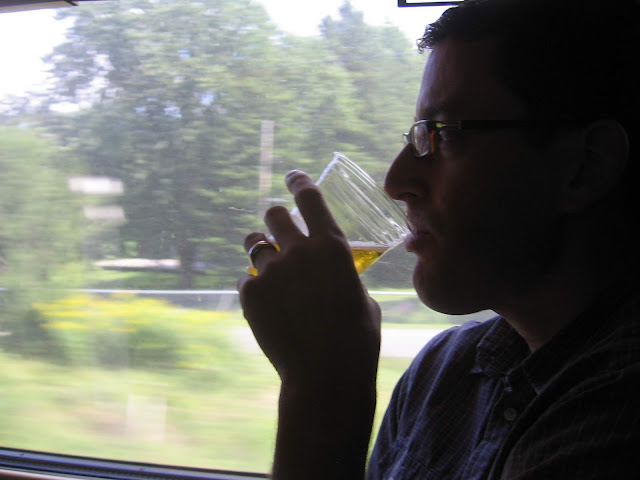 14. Arriving at the Quebec City train station, both as a child and then as an adult on my honeymoon. This station is one of the best railway stations, period. You don’t forget your initial experiences in this place. It is a jewel. 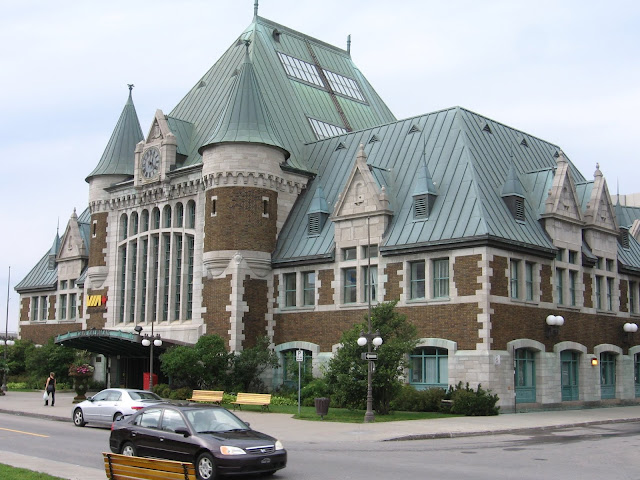 15. One of my favourite stretches of track to travel is the (now) Goderich Exeter Railway line through St. Mary’s, Ontario. The first few times riding this stretch of railway still evoke fond memories. This town is still served by Via Rail. When you come into town on the Sarnia Bridge over the Thames River, you feel as though you have been transported back in time. The pastoral view evokes memories of a bygone era, when idyllic small towns owed their existence to the railway. Four daily trains still serve this town.

16. That time when I wanted to capture some dramatic winter railroading shots at Ottawa Station and I came away with these dramatic images, thanks to a wind storm. 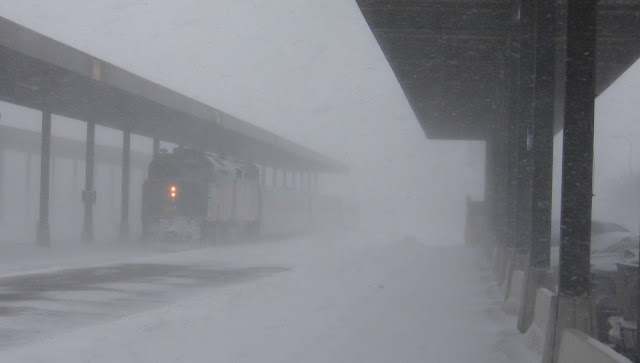 17. When my second daughter came into the world, she didn’t like me all that much, which was not surprising. However, when my wife went to work and baby had to spend time with me, I decided that a car ride would calm her down. I was right. That began a few months of wonderful jaunts through the countryside in west Ottawa looking for photo opportunities along the Smiths Falls subdivision. This might be my favourite shot from that time. 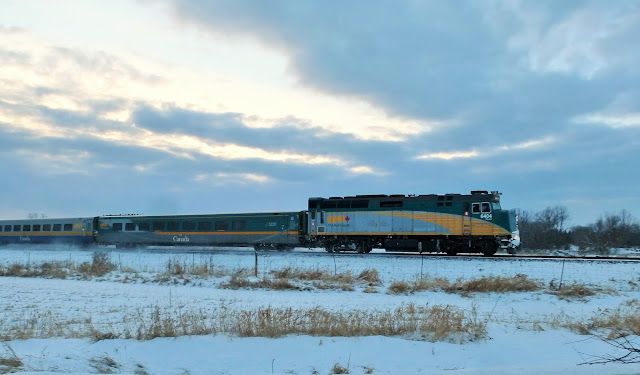 18. When I started getting a little more adventurous with my railway photos, I came across this stretch of McKenna Casey Drive in Ottawa’s west end. I captured this shot of a Via Rail corridor train while a summer storm barrelled into town from the south. 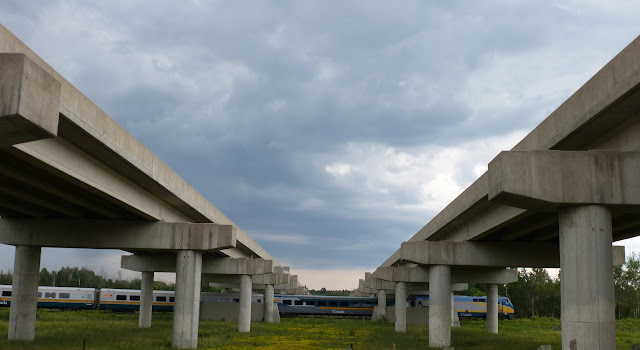 19. My sister spent a summer working in Banff and I was lucky enough to be able to go visit her. She was nice enough to take me to Banff station, where I did some ridiculously cool railfanning, which you can read about here and here. Also, over the course of our adventures, we were able to check out the old Lake Louise passenger station, when it was still in service. We didn’t see any trains when we were there, but that station might be one of the best in Western Canada. It’s too bad the Canadian doesn’t call there anymore. 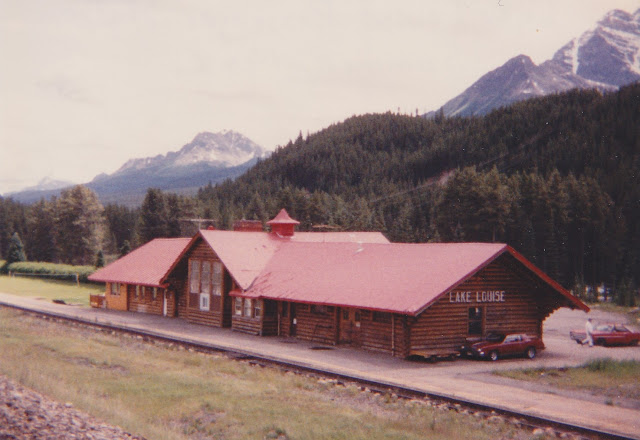 20. The first time I took my oldest daughter with me to the train station, in this case Fallowfield, her lasting memory of the experience was not at all what I expected. I sat her down trackside and tried to teach her a few things about rail safety. I took a short video and the engineer was nice enough to wave at Sarah and her foamer dad. But, my daughter was much more fascinated with a crow that was craning its neck sideways to drink out of a meager puddle in the parking lot. She still talks about it. Sigh. I guess the railfan gene might have skipped a generation.
Posted by Michael at Monday, December 03, 2018

Really enjoying this series. Thanks for sharing these memories.

Many thanks. I truly believe Via Rail is a national treasure. I'd love to hear more memories from everyone of their time aboard Via trains or just trackside.

So it's been a while since I've commented... still reading, just no time *eye roll*

I do have a Via Rail memory (vague) from about January 1984 when my parents, along with my 2 younger siblings, took a Via train from Union Station in Toronto to Chatham for a weekend at the Wheels Inn.

On the return trip, the power on our train, one of the new Bomb LRC units had engine trouble (it may have caught fire), and we waited for a while until a new head end could be coupled to our train. I was about 5 at this time, so have some recollection of the events. The LRC was replaced with an F unit, and away we went back to Toronto.

Also have very similarly vague memories of taking an RDC from Oakville to Exhibition Place in the mid/late 80's to watch the Blue Jays. This happened a few times, and I remember asking my dad why it was called an RDC.

Keith, I might be one of the few people in Ottawa who knows all about the legendary Wheels Inn in Chatham. Gone but not forgotten. Thanks for the memories!

This is a great series, Michael - inspiring!

Many thanks, Steve. The inspiration behind this was the re-establishment of rail service to Churchill, which illustrated to me just how much railways means to many of us. Just the other day, I watched the video of Churchill residents cheering the arrival of a Via train to their station for the first time in more than a year. Now that is inspiring!