40 Shades of Via Grey

I recently caught up with a few Via Rail corridor trains. I have been meaning to get out and get some shots while there was still snow on the ground. It's been a busy winter with precious few chances to catch anything trackside with a little snow in the shot. Luckily, I was able to make the most of my chances. 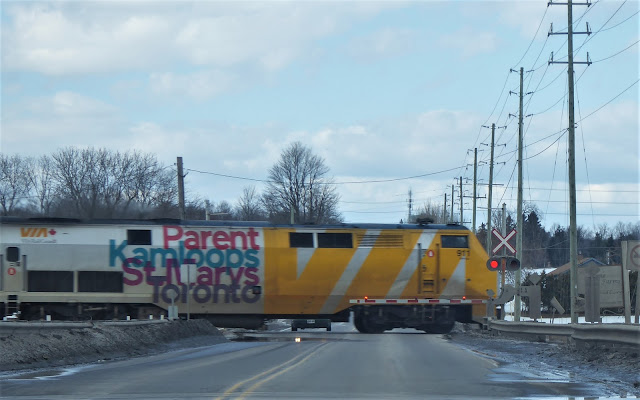 One of my meets was lucky. I was driving home and made sure to check out a few trackside spots long the Smiths Falls Sub. When I was driving north along Moodie Drive, the crossing barriers came down. The road was empty so I slowed down and tried to set up a quick shot of an eastbound P42 makings its way to Fallowfield Station. P42 911 still had its Canada 150 wrap minus the Canada 150 logo. Not the best shot in the world, but it was the best I could do in a rush.

The next day, I dropped by Via's Central Station on Tremblay Road to check out if anything was worth shooting. This was the first thing I saw when I arrived.

A Via crew was inspecting another wrapped P42 on a stub-end spur. This was the first Via 40th anniversary wrap I have seen. It makes this unit look brand new. My plan when I arrived at the station was to get a shot of the departing Train 24, which was about to leave for Montreal. I also wanted to catch a glimpse of Train 45, which was scheduled to leave 11 minutes after Train 24. But, given the construction on the new platforms around the west end of the station, there was no space to stand trackside. So, I made my way to the Belfast Road overpass to set up for Train 24's departure. 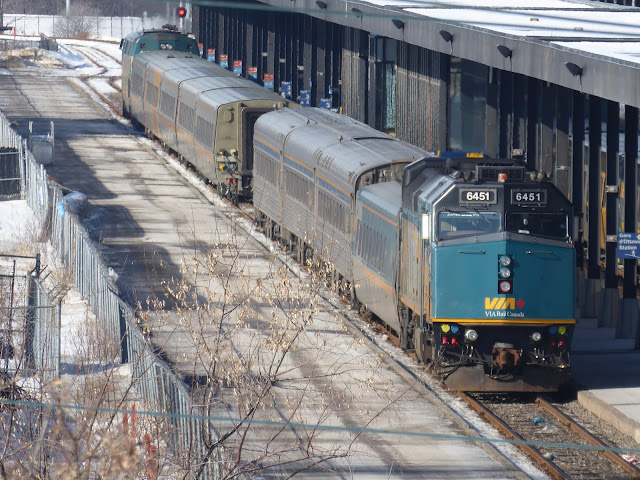 Before the Montreal train left, I got a quick shot of two parked trains parked on the south track end to end. One train had an LRC Business Class car hooked up to three of the old streamliners. Nice mix of equipment. You might notice a bit of wire in the bottom of this shot. Getting clean shots of the Via station from the Belfast overpass is next to impossible. I tried to shoot between the wires a few times, but I never could seem to get them out of the frame. 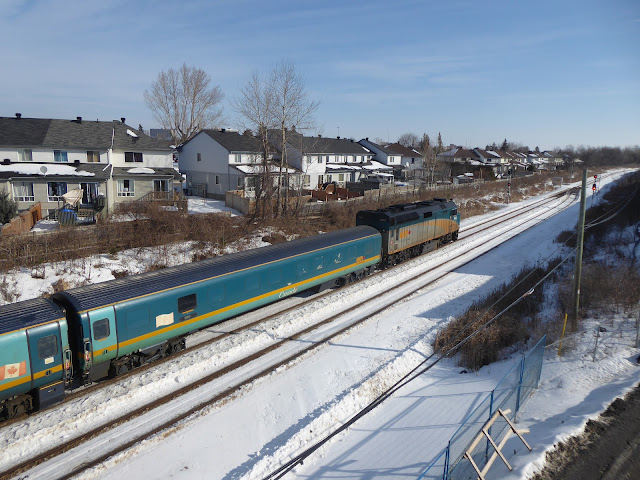 Here's Train 24 with an F40PH-2 leading a consist of the Renaissance equipment. Those who know this stretch of track might wonder why there is such a long shadow on the south side of the track. That shadow is cast by a long sound barrier that was erected as part of the construction of the O-Train Confederation Line Belfast Yard. More on the O-Train next week. But, by way of comparison, here's a post that shows you what this stretch of track was like before that long sound barrier was put up. 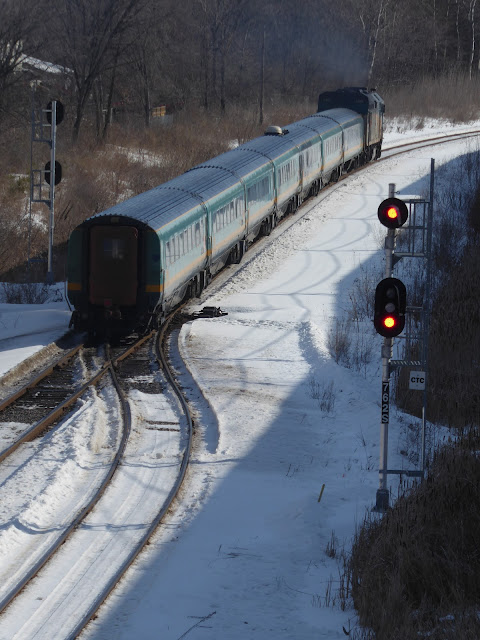 I snagged a few shots of Train 24 as it gained speed and the F40 let out a bit of smoke. The long shadow of the sound barrier is really noticeable in this shot. I really like this shot, especially the smoke coming out of the F40. 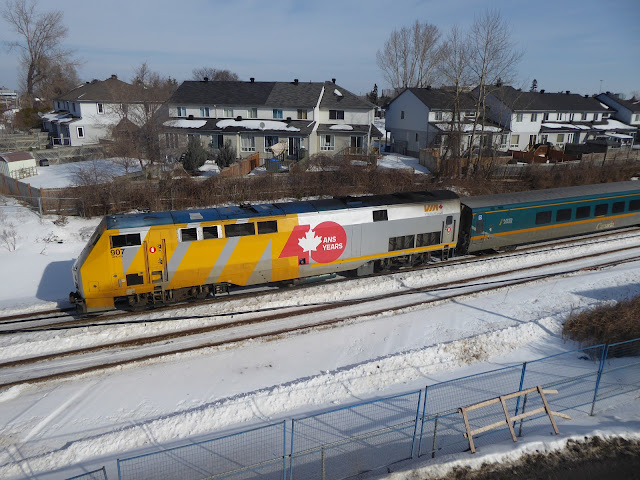 Back to that newly wrapped P42. Right after Train 24 cleared the scene, the P42 backed out of the stub-end spur and backed up below the Belfast overpass, which allowed me a great opportunity to get this unit in full sunlight. This was Train 45. Soon after, a switch moved, this train took over the main track next to the station and began to board passengers for Toronto. I was happy to get a look at Train 45, which I had not expected. Nice little bonus. 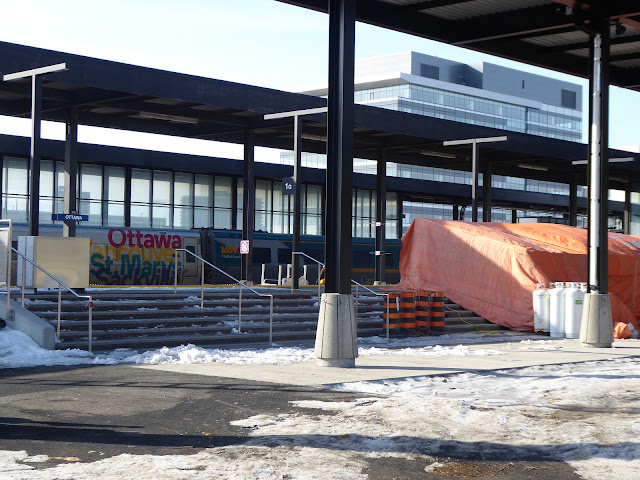 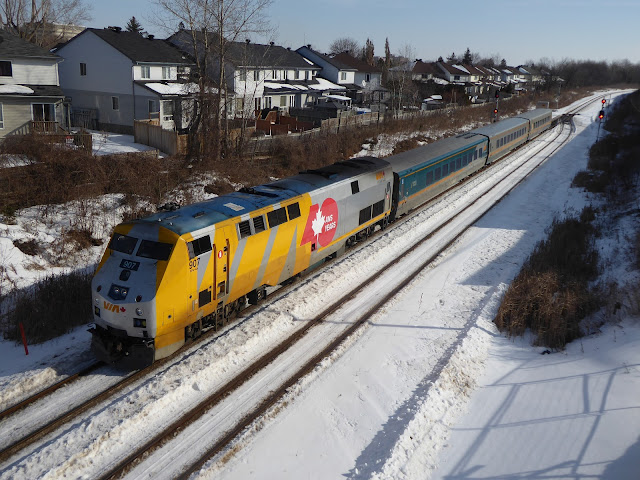 And here's one last shot of Train 45 before it gains the main track next to the station. All in all, it was a productive couple of meets for me. I did manage to see a bit of a 40th anniversary wrapped LRC coach but was not able to get any quality shots of it. Something to look for the next time I am trackside.
Posted by Michael at Friday, February 23, 2018

Nicely done, Michael. Like the CANADA 150 wraps, the 40 Years/Ans wraps are getting railfans trackside - even the wrap-dislikers (I can't honestly believe they're true haters!)

I like that photo of the two trains back-to-back very much.

Thanks Eric and Steve. I was surprised by the online debate over the new wraps, but it at least gives us something to talk about, right? I don't mind the Via 40 wraps and have really grown to like the clean silver look that began with the Canada 150 scheme. I was quite happy with the variety of shots I came away with. My favourite shot is the image of the Montreal bound train gearing up and throwing off a little smoke.

Seconded on Steve's comment. This is the first I am seeing the new wraps and I am fairly impressed. I am looking forward to catching one "out in the wild" like you did lol.