The Prince of Wales Bridge: Oh, no, not again

Just when you thought it was safe to put this piece of Ottawa's rail past and future on the back burner, the Prince of Wales Bridge has once again made headlines. The bridge, which has not seen action in many years, has long been neglected by its current owner, the City of Ottawa. After years of rejecting calls to preserve the bridge for use as an interprovincial light rail link, the city has finally come around to the idea of using the bridge for commuter trains in the future. So, all is well right? Well, not so, apparently.

As many locals know, the Prince of Wales Bridge was once a key piece of the Canadian Pacific Railway's rail network in Ottawa. It once played a key role in connecting the CP Ellwood, Prescott, Lachute and Maniwaki Subdivisions in the National Capital Region. In the final days of the Canadian Pacific's presence in the region in the late 1990s, the bridge was lightly used although it did connect CP to its last remaining customers on the Quebec side of the Ottawa River. After CP left Ottawa, the bridge was purchased by the city as part of the deal it struck to buy the Ellwood Subdivision, which is now the O-Train Trillium Line. 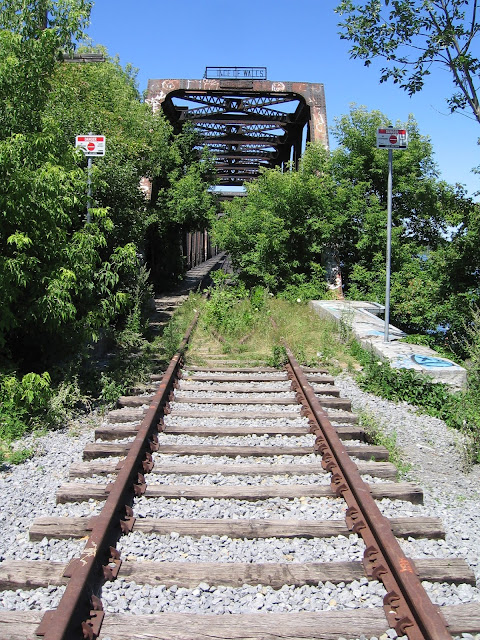 In recent months, the city has been busy putting the final touches on the O-Train Confederation Line. The new electrified light rail line crosses over the old  Ellwood Subdivision. The contractor building the line is in the midst of constructing the new Bayview O-Train station, which will allow commuters to transfer from the electrified Confederation Line with the diesel-powered Trillium Line (there will be no rail connection like a diamond due to interoperability issues between the two O-Train systems).

The problem that the city has now is that the old rail line that leads to the bridge was removed, which is a no-no under federal laws. This is the position of the Moose Consortium, a organization that has plans to establish a private regional commuter service on the existing rail lines in the capital region. Now the city is in big trouble, it seems, with the Canadian Transportation Agency, which is the body that grants permission for rail lines to be removed. Making matters worse for the city, it appears that it okayed permanent structures to be built atop the old rail line. Now the city has until the end of the month to explain to the federal agency why it has removed rail without following the proper procedures, according to local coverage.

In my former life as a journalist, I spoke to the man behind the Moose Consortium Joseph Potvin and he told me flat out he was going to make sure that the city lived up to its obligations as the owner of the rail line and the Prince of Wales Bridge. He told me more than once that he would do everything he could to make sure that the infrastructure at Bayview was kept in some sort of operational condition. He says fixing this mistake will cost the city $20 million.

Here's what I am wondering. If the city is serious about using this bridge for rail, which finally appears to be the case, why is the city building over this line? If what Moose is saying to true, why would there not be a plan in place to preserve this rail?

Here's the biggest question in my mind: Am I the only one who noticed when the Trillium Line was rebuilt that the Trillium Line's connection to the old trackage to the bridge was disconnected and buried? It's been several years since this part of the rail line was removed, but nothing was said then. While I appreciate that the removal of the 250 or so metres near the new Bayview Station is much more noticeable, I wonder why nothing was said about the original disconnection of the Prince of Wales trackage years ago. 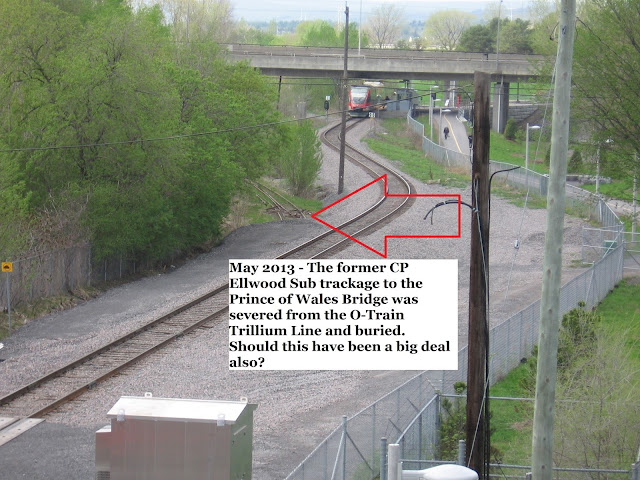 I can only shake my head as a railfan and as a taxpayer that this situation is resolved properly.

Moose did in fact object when the switch was first modified in a way that effectively severed the track. It was taken to the CTA and dismissed. In my view, the CTA was a bit toothless at the time.

Good additional info. Thanks, David. I don't recall that Moose complained about that switch, but it's good to know that they did.

"In 2009 the City of Ottawa disabled a switch on the Ellwood Subdivision at the location where the Bayview Station Spur (which was constructed in 2000-01) connects with the main railway line. Specifically the City removed a several-meter-long X-shaped device, referred to in railway terminology as a "frog" (shown in the photo at right), which is designed to ensure that train wheels crossing a gap in the rail do not drop into the gap. Moose Inc. met with Agency officials on 26 January 2011 to express our concern that the City's modification to the switch severed the operational main railway line connection between the Ellwood Subdivision in Ontario and the Lachute Subdivision in Quebec. Mr. John Corey, Manager, Rail Investigations, explained verbally that the City had disabled the switch only to reduce noise, and that this was an acceptable temporary modification because it could easily be replaced within two weeks if needed for inter-provincial traffic by any railway company between the Ellwood Subdivision in Ontario and the Lachute Subdivision in Quebec."

A copy of this letter is online at:
https://www.letsgomoose.ca/wp-content/uploads/CTA_EnforcementOfDecision-210-R-2012_Prince_of_Wales_Bridge_25oct2012dPDF.pdf

That paragraph goes on to say:

"An earlier Agency reply in 2009 to a letter from citizen Mike Kostiuk (25 August 2009, File R 8005/C6, Corr: 09-04414, signed by Paul Lacoste of the Rail, Air and Marine Disputes Directorate) explained that it is the Agency's understanding that the City of Ottawa's intention remains to eventually operate railway service over the Prince of Wales Bridge to Gatineau, Quebec. Specifically the Agency said in its letter:
"Although paragraph 93(1) of the CTA provides that the Agency may vary a certificate of fitness to reflect a change in railway operations or circumstances to those operations, the most recent Agency Decision (No. 283-R-2007) continues to show that the Certificate of Fitness for Capital Railway covers the operation of the light rail commuter service, also known as the O-Train, in the provinces of Ontario and Quebec... [and] the Agency has received no indication from the City that it no longer intends to ultimately operate an interprovincial passenger railway service".

More recently, the City's 28 June 2017 assertion in boolean logic is:

It is this simple assertion which is now being tested for posterity in Canada's Sesquicentennial year, in the course of the Agency's enforcement decision. I've no idea which way this will go, so in order to prepare for any outcome, I've been poking around in the realm of quantum theory which suggests that all possible alternate histories and futures are real, each representing an actual "world".
https://en.wikipedia.org/wiki/Many-worlds_interpretation

If the current enforcement action fizzles, then this would provide a handy legal precedent for use of the many worlds interpretation in any defense context. Let's call it the "Run Lola Run Defense".