When I started this blog back in 2013, I knew it would sometimes be tough to keep up the pace. Truthfully, I have had some trouble of late keeping up with my usually weekly entries. However, I did just want to share that I have lots of idea for future posts although I am finding that it is taking me longer to develop them than I had anticipated. Sadly, my railfanning has been severely curtailed in recent months. And even when I have had time, the railways have slapped me in the face with some skunkings.

Case in point: During the March Break, my family made its way to the Toronto area for a short little getaway, mainly for the purpose of taking the kids to the Toronto Zoo. I had some time during that week to sit trackside just a little way down the road from Macmillan Yard. You'd think that would guarantee some train sightings, but I managed to find the one period of the day where there was nothing going on along that sub.

Anyway, be patient with me. This too shall pass. The school year is ending and some opportunities are popping up. I have some great stuff still to come. 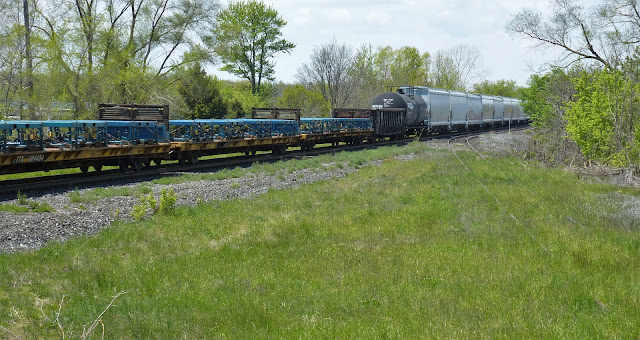 This shot above is from my May meet with a CN freight train in Wyoming, Ontario along the Strathroy Sub. I am including it for two reasons. One is that it shows the old siding that once served Wyoming industry, including its feed mill. I could not find a good shot from that meet that properly catured this disused rail line until I uploaded this one. This shot shows you that, although the line has seen better days, it appears to be intact. Whether it actually still connects to the main line is another question.

You can read about this meet here.

The other reason I am showing this shot is because I am planning a few posts that hopefully showcase some of my better shots of rolling stock. I find the rail blogs that interest me the most are the ones that feature not only the motive power fronting trains, but also the cars as well. As has been mentioned in a few blogs of late, there are a number of pieces of old rolling stock that are fast disappearing, soon to be replaced with faceless, nameless leased private car fleets. So, I'm hoping a post or two about rolling stock might further stimulate some interest in my fellow rail enthusiasts to get out there and capture some great pieces of rolling stock as well. 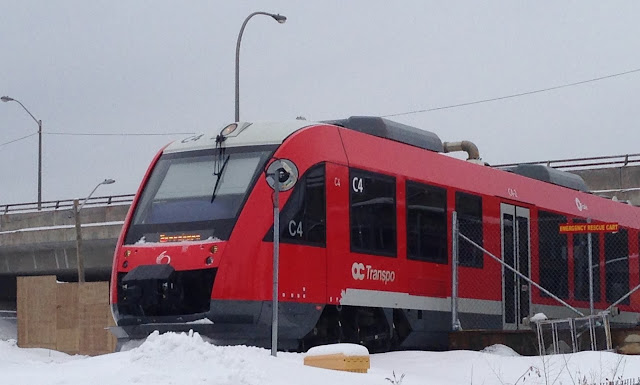 A few notes about the O-Train Confederation Line work. The work is proceeding pretty quickly right now as a number of the rail stations are starting to take shape, which I am able to track as my bus passes by them on my daily commute to downtown. The interesting things I've noticed about the new light rail line are as follows:

Here's an embarrassing confession about light rail. I have to say I can't believe I didn't figure this out sooner, but here goes. I didn't realize in all my reading about the Confederation light rail line that all express buses would unload their passengers at Tunney's Pasture in the west and Blair in the east. I know that the city has said all along that the train would reduce the number of buses in the core substantially, but it was never clear to me that all express buses would stop at Tunney's and Blair, at which point all riders would be forced to hop on a train for the last few minutes of their commute. This means all buses picking up riders in Orleans and Kanata, for example, will go no further than the end of the Confederation Line.

This means all express bus riders will no longer have a seamless commute. They will be forced to get off their bus and ride the train downtown. I don't like the idea that I will have to do this, but if it saves time, I'll get used to it. I have my doubts that this arrangement will work as has been advertised. We'll see.

That being said, I still think Tunney's and Blair were poor choices for the initial east-west LRT line. Both stations do not really have much of a population immediately around them to capture riders in their immediate vicinity. I know this will be a moot point when Phase 2 is completed. Speaking of, the federal government has committed up to $1.9 billion toward the second phase of the LRT in Ottawa. This phase will extend the Confederation Line to Trim Road in the east and Moody Drive in the west. The second phase will also see the Trillium Line extension proceed all the way to the airport. 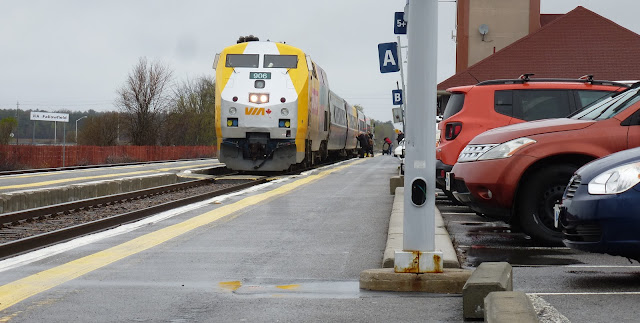 At work, I have been put in charge of a promotion campaign, which has required me to design internal posters. One of the overriding themes of this campaign is that the workplace will be thoroughly modernized and ridded of much of its paper-based processes. I was asked to come up with some ideas, so I obviously suggested that the modernization project is like going on a long journey, which can often be tiring but ultimately satisfying at the end. I suggested a train or airplane theme (Am I a good public servant or what? Did you notice the lack of favoritism?)

Well, the train theme was chosen, so I have been able to indulge my passion a bit at work, which has been great for me. I was busy searching for images of passenger trains when I noticed that Via Rail Canada now has a private archive of photographs which are available for use, under certain conditions, the most important being that the images be used in a way that promotes Via and train travel. I contacted the railway and told them what I was doing and was granted access to the archives. I just thought I would pass the information along to anyone who might be interested. I don't think I will use these images on the blog right now, but I may in the future. There are some great shots of the Canadian, in particular. 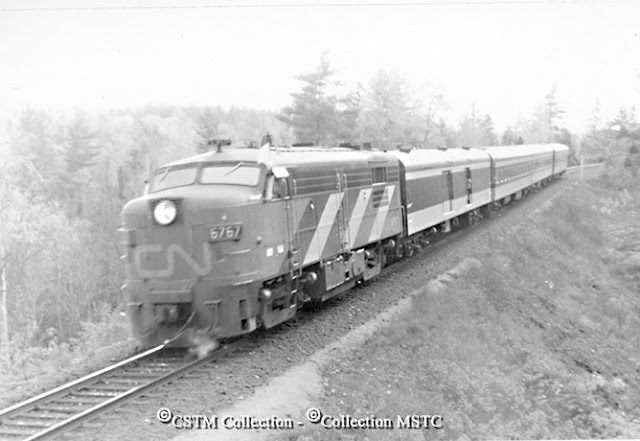 One final note. I am planning more historic posts in light of all the Canada 150 hoopla this year. My next post will focus on a railway town on the edge of Eastern Ontario that might just one day see its importance as a railway hub re-emerge. Stay tuned.

Ditto for the concerns about the transition at Tunneys. I am lucky where I get off at Westboro (at the moment anyway) so I am unaffected. But I can't imagine having to transition at Moody or Bayshore when everything is completed. Likely impacts my decision on driving to work again or taking transit. I thought at the start of this project that people will be turned off if the rides are not seamless. I expect there will be a drop in rider ship in the next couple of years. Whether it becomes permanent or not, who knows.

Lots to chew on in this post, Michael. What I digested was: rolling stock photography!
Yes!

Thanks for sharing your thoughts,
Eric

I was out at Greenboro on the weekend and saw them working on the O-Train line. I noticed that they disconnected the connection going west from the Yard to Wass. I wonder how long this will be disconnected for, and if they will run the freights through the Ottawa station.

I saw a freight a couple weeks ago on the track that connects the Alexandria Sub and the M&O Sub just north of Walkley. I didn't think there were any customers left on that part of the line, but it was there doing something.