The rolling pipeline at Bedell

I was recently able to spend some time trackside on CP's Winchester Subdivision, as I mentioned last week. Although the sub isn't seeing the frequency of trains it once was, I was happy that I stuck around long enough to shoot something I have never shot before: a unit tank train. In this case, it was an eastbound empty ethanol train, which means it's either CP 667 or 643.

Before you laugh, remember that I live in Ottawa and I rarely see any big time railroading. I can honestly say this is the first time I have seen one of these trains in action, although you may recall that I did shoot a parked tank train in Smiths Falls last summer. 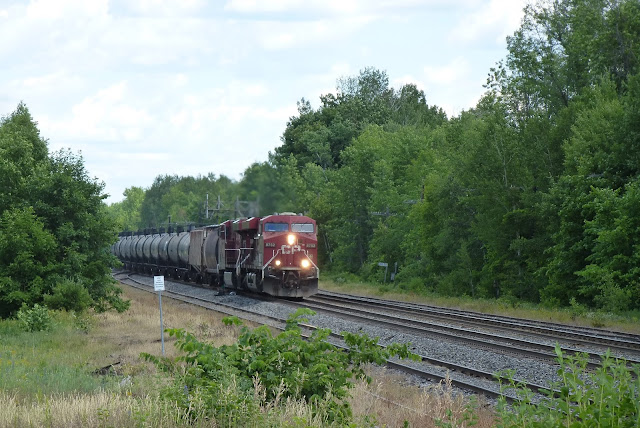 I was happy with how the shot below turned out, since the sky showed up beautifully, although that bush nearly ruined the shot. I can explain. I had set up trackside and had been waiting for some time before I was ready to pack it in and head home. I had begun to turn my car around to head home when I saw this train coming, fairly quickly it turns out. I had to rush back to my spot and set up quickly. Hence, I wasn't paying attention to the bush as I tried to frame this shot. 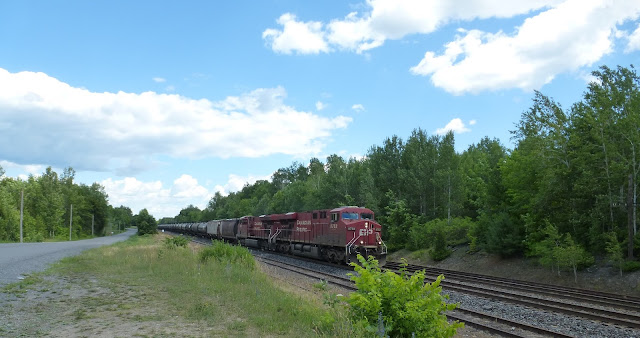 I snapped a few going away shots as the train made its way to the Bedell Road level crossing. The train had two buffer cars up front, a CP Rail multimark cylindrical hopper and a ribbed Soo Line hopper. Hey, when all you see is a line of tank cars, you have to make sure to get shots of anything out of the ordinary. 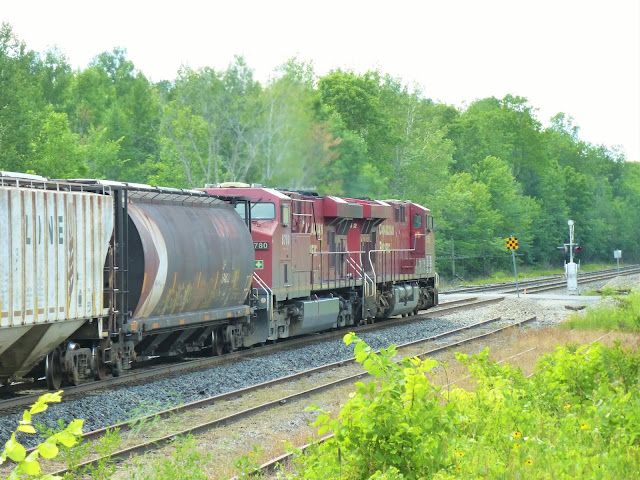 Here's a shot with a little more of the consist in the frame as the locomotives cross Bedell Road. Most of the tank cars on the train wore the Renewable Products Marketing Group logo on the side meaning this train was an ethanol train. 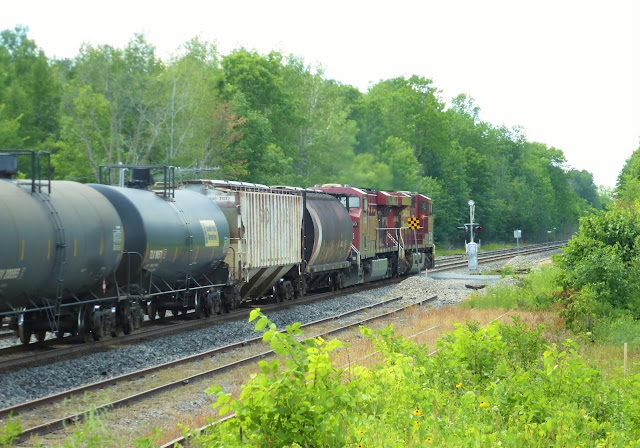 Here's what 99 per cent of the train looked like: a long line of black tank cars. This did not make for very interesting photographs on the surface. But, as I have mentioned recently, I have tried to get as many different shots as possible lately to make up for the limited railfanning opportunities I have. In this case, I tried to think about some nonconventional shots that might work. 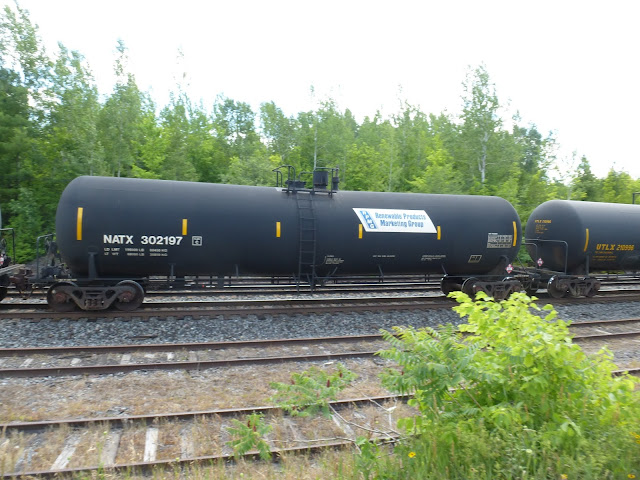 This shot below isn't terribly nonconventional, but it is a shot that I would not normally take, since it's basically just a long line of tank cars. However, I managed to get that old signal tower over the South Prescott Spur in the frame. I do like the symmetry of the lines in this image. Although, I was disappointed that the sky kept washing out in some frames. 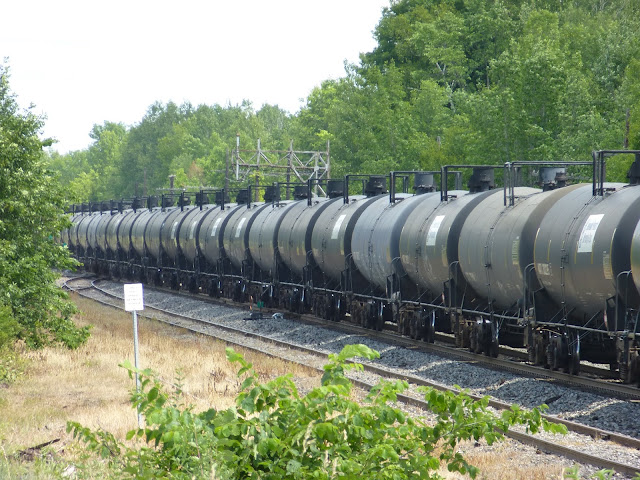 One of these things is not like the other things. Can you spot the outlier in the consist? Amid a sea of black, one lonely white tank car stood out. You can see it just past the Bedell Road crossing. You can also see the remnants of the old yard in Bedell. That track that is broken up by the crossing is now used for bad orders, although I don't know how often it is used. 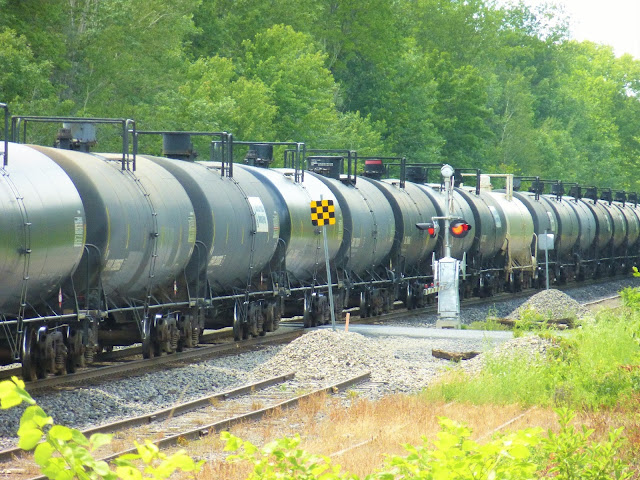 And this is the end of the train as it clears Bedell Road and makes its way westward toward Merrickville and beyond. 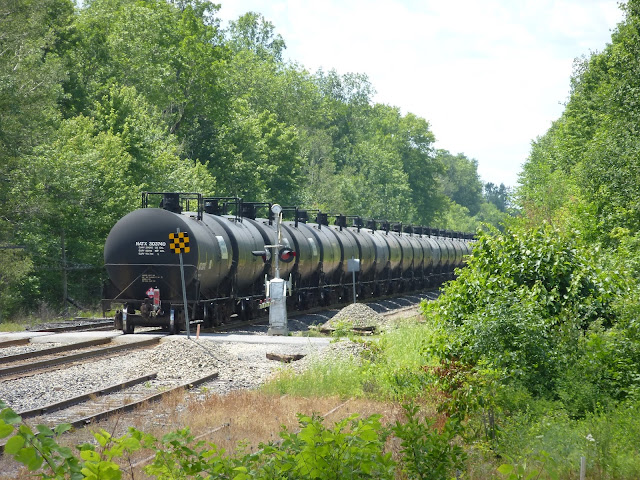 So there you have it. More than three years into blogging, I have captured my first rolling pipeline on the rails. I was pretty happy with this meet. When you're accustomed to chasing a once weekly three car freight train, something like this is pretty special.
Posted by Michael at Thursday, August 04, 2016
Email ThisBlogThis!Share to TwitterShare to FacebookShare to Pinterest
Labels: Bedell Ontario, Canadian Pacific, CP, CP Rail, Eastern Ontario, ES44AC, Kemptville Ontario, railfanning, railway, Winchester Subdivision

Nice catch! I do like the symmetry of oil trains.

Thanks Steve. I was happy with those lines as well. It's a good spot to capture long lines of rolling stock.