Spring and summer action in Sarnia

My brother has been busy in the spring and summer months as he makes his way over the highways and byways of Lambton County. Lucky for us, he usually brings along a camera or iPhone to get shots of trains that make their way over the busy Strathroy Subdivision. I have put together some of my favourite shots that he has sent my way in the last few months.

This one below is my favourite. This is a triple header CN container train headed east on the Strathroy Sub near Blackwell Side Road. I like the colour and lines that he captured in this shot. I also like the field and wildflowers he caught in the foreground. 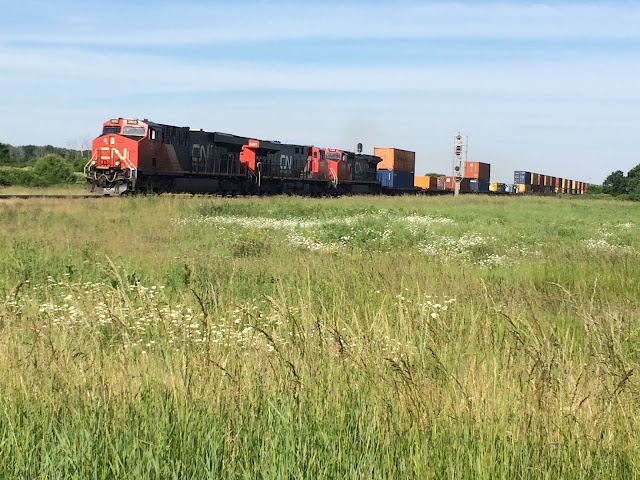 Here's one that my brother was pleased to catch. You can see two GP9s pulling the CSX interchange freight through Sarnia Yard near the Via Rail station. But it was the car immediately preceding the engines that caught his eye. It's a Seaboard System covered hopper, likely repatched CSX although you can't tell from this photo. You may recall that I also caught an interchange freight train in this yard with some similar CSX history in tow.

My brother also caught another piece of CSX history when he caught this old Richmond, Fredericksburg & Potomac ribbed hopper. You can see traces of the old RF&P logo from behind the CSX patch. These are the types of catches that will mean more in the future, I think, since many of the vestiges of the pre-Big Six railways will continue to disappear. But for now, it's good to see something like this still making its way over the rails. I wonder what the plate on the right hand side of the car displayed. The railway, which connected Richmond, Virginia with Washington D.C., had the slogan "Linking North and South." Maybe that was a plate for the slogan. 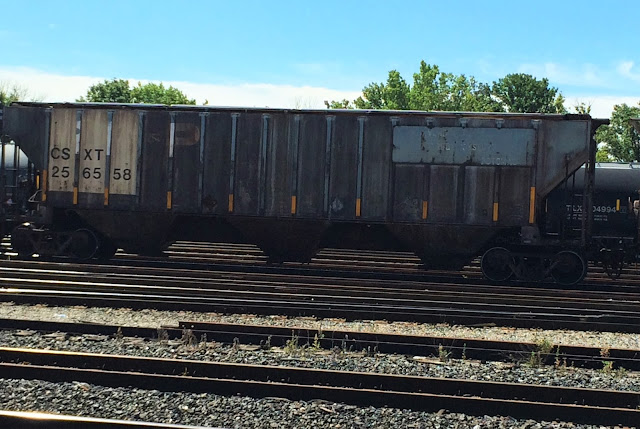 One of these locomotives will be familiar to readers. It's the old GM Diesel switcher from London, Ont. I have caught this unit before. The other unit it new to me. It looks like it has some sort of CP action red-esque paint job, although the stripes on the side of the cab suggest this was not a CP unit. The only clue we have as to where this unit worked is the 456 number plate. It looks like something from the GM Diesel SW series. It's a cool old relic, which sadly is most likely being used for parts by Lambton Diesel. 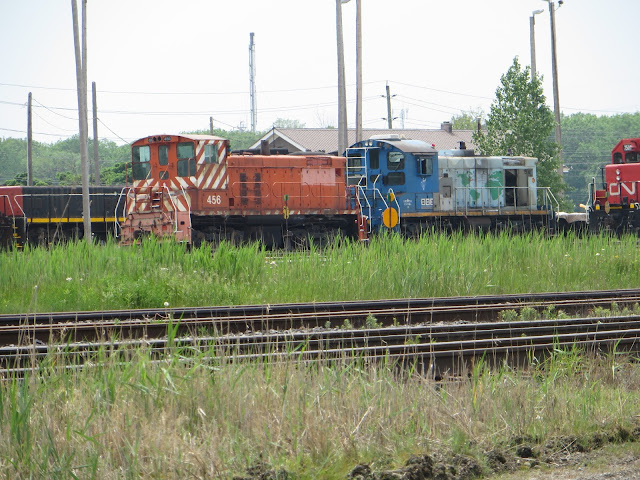 I included this one not for the train but for the old rail line in the foreground, which was recently torn up. This was the old track that was used to park passenger trains in between their runs to Toronto. As far as I know, this line had not been used for years. It was pulled up by CN earlier this year. As for the train, we're seeing a pretty typical GP9-slug pairing, which has been a common site in Sarnia for years. Given the heavy loads these GP9s have to pull, the slugs help with traction on the rails. 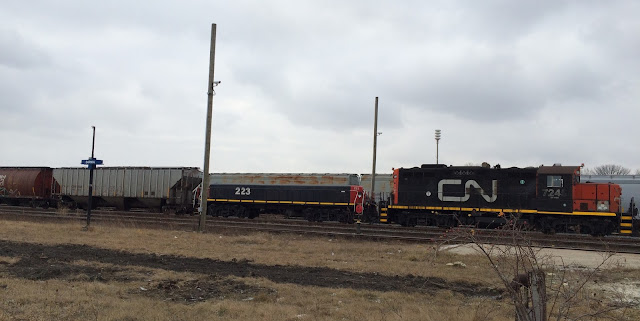 Here's a nice shot of a CN autorack train gearing up for the descent to the Paul Tellier Tunnel beneath the St. Clair River. On the other side of the tunnel is Grand Trunk territory in Port Huron, Michigan. If you ever find yourself in Sarnia, make some time to sit at the Via station so you can catch these tunnel trains picking up speed as they head toward the tunnel. It's quite a site. 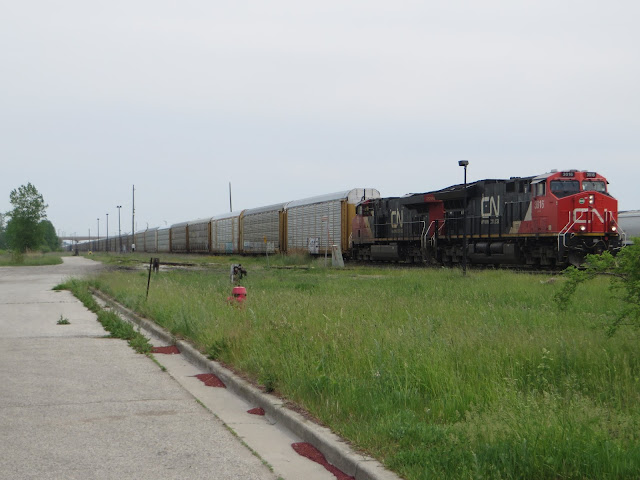 On that same train, my brother snagged a shot of a NS autorack with some graffiti on the side honoring the old A-Team television show. The BA Team members are present on the side of the car, including Faceman, Murdoch and B.A. Hannibal is blocked by the station. I don't normally like shots that showcase graffiti, but I will make an exception here, mainly because I love the A-Team.

Fun fact: In one episode of the A-Team, Hannibal laughs at someone who goes by the name "John Jones" and remarks, "Nobody's named John Jones." Funny comment since Hannibal's actual name was John Smith.

One final yard shot of some old Government of Canada cylindrical hoppers. I have a few of these with my HO scale trains in my basement. I am hoping they will be running on a layout eventually. I at least have them out of storage bins so that's a start. This shot also shows the old siding that once led up to the east side of Sarnia's Via station, where passenger trains were laid up.

Before we move on to the next shot, I would recommend reading up on these cylindrical hoppers in this excellent post in the Trackside Treasure blog and in this fascinating post in Confessions of a Train Geek. 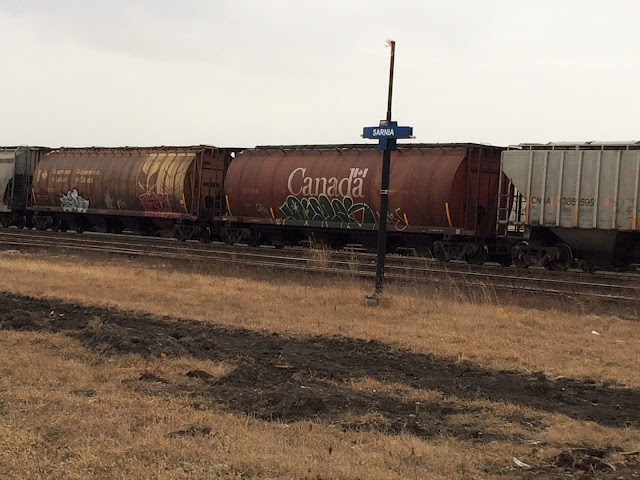 One final shot along the Strathroy Sub of a CN mixed freight headed east toward London and beyond. My brother captured this shot on the edge of the city where the city gives way to prairie-like farmland. Great for taking shots of very long trains. 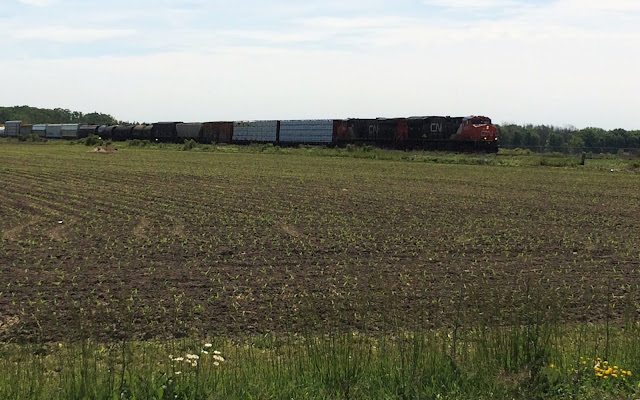 Thanks to my brother for these shots. I have been lucky enough to receive a great many more shots from my brother this summer, some from Calgary and many more from the Sarnia area. Look for more of his contributions throughout this year. By my count, I now have shared shots on this blog from my brother, sister, dad with my sister-in-law and wife's shots set to make their debut later this year. It truly has become a family affair.

Great photos by your brother! I like the old switchers. Funny how I was talking with a young railfan tonight and he showed a former Richmond, Fredericksburg and Potomac car he photographed, and here you blogged about the same railroad!

Nice contributions by your brother. The RF&P main yard was Potomac or 'Pot' Yard and it's always great to see CSX 'heritage cars'. My favourite are shortie Baltimore & Ohio repatched covered hoppers.

Thanks for helping me learn my new 'thing' for today, Michael!
Eric

Hi Michael - You have an awesome and very informative blog! I have a question that perhaps you or one of your readers could answer. I live near Windsor, have family in Ottawa and, as a kid, spent many summers vacationing in The Valley. So I am familiar with most of the places you write about. Sometime between 1977 and 1980, we took a day trip to Pembroke and sought out the old CP train station so I could snap a photo for my collection. This was back when The Canadian still called daily in each direction! But I've always wondered if Pembroke also had a CN passenger station. Where was it located? Is it still standing? Any photos? When was the last train? Did The Canadian and Super Continental ever share a station in Pembroke? I was in Pembroke last summer, but only for one night and didn't have time for any rail-fanning. Thanks for any information!

CN did indeed have its own station in Pembroke. Much more utilitarian-looking than CP's quaint stone structure. (Bill Crago photos of Pembroke CP in this post): http://tracksidetreasure.blogspot.ca/2014/06/diefenbaker-funeral-train.html

Back to CN...its station was used by CN and VIA's Super Continental but only until October, 1978 when the rationalization of routes between CN and CP resulted in CP's route through the Valley being the only one used. This would be the case until 1990, when VIA stopped serving the area.

For anyone interested in CN and CP in this area, I highly recommend Ray Farand's books.
http://www.blurb.ca/b/6296662-volume-2-steel-passageways-up-the-valley
Definitely must-haves.

Thanks for the information. Where was the CN station located and does the building still exist?

Kevin, I'm sorry to say that I don't know and I'm not sure, in answer to your questions.
Eric