Toronto Part IV - The following post is the fourth of four I have put together to chronicle the various trains I saw on a recent trip to Toronto with my family in mid-March. You can read the first three parts here, here and here.

Call it a Moveable Feast.* When my family spent a few days in Toronto last month, I was thrilled that we were treated to a trackside seat to all the comings and goings at Toronto's Union Station. As I have mentioned, our rented condo was just west of Union Station, in between Spadina Avenue and Bathurst Street.

This week, I thought I would share some of my favourite aerial shots of the railway action that were taken from the 37th floor balcony, which fronted onto Toronto's busy passenger rail corridor. Let's begin with a Via Rail combined train. I saw this consist twice over my three-day stay. I like this shot because it captures the entire consist heading beneath Spadina Avenue. The first engine is trailed by three coaches while the second is trailed by six. I have only seen this type of consist on other people's blogs, so it was a real treat to see something like this in person. Via Rail's J-Train has been shot a number of times in Quebec and other points east of Toronto. Does anyone have an idea what this consist might be? I didn't think it was the so-called J-Train. 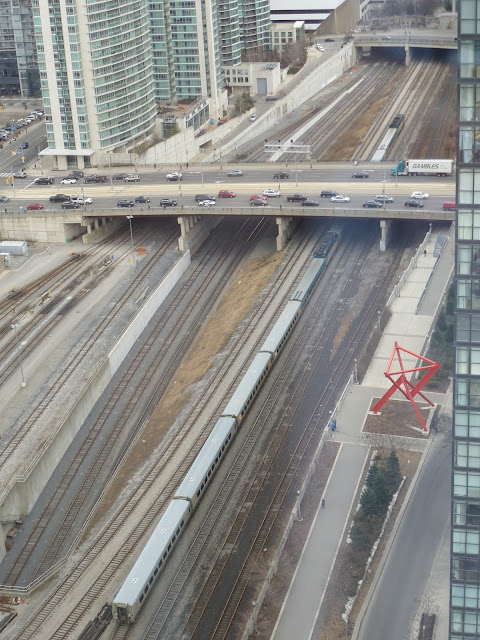 Another scene I have rarely seen outside of Ottawa's Central Station. As you see below, two Via Rail corridor trains cross paths on their way to Union Station. In this case, the F40 consist was stopped while the P42-pulled streamliner consist proceeded ahead to Union. It was cool to see a diversity of Via Rail equipment from up high. 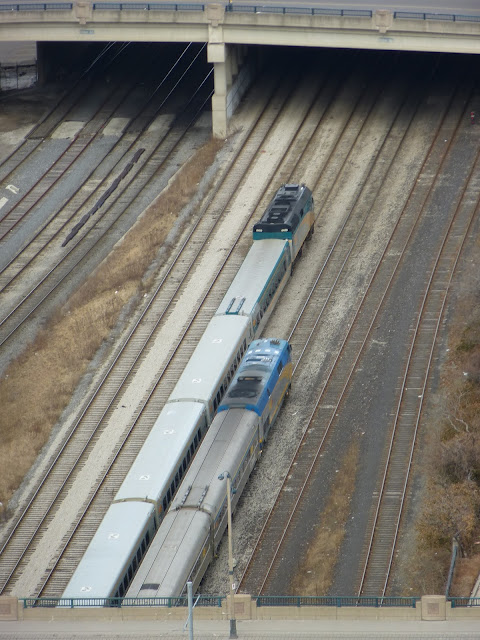 This perspective gives you an idea of where my perch was in relation to the tracks. In this shot, a Via Rail corridor train heads west out of Union, just beside my spot. This is what a train looks like from 37 floors almost directly overhead. You can see some bundles of rail and ties beside the train. 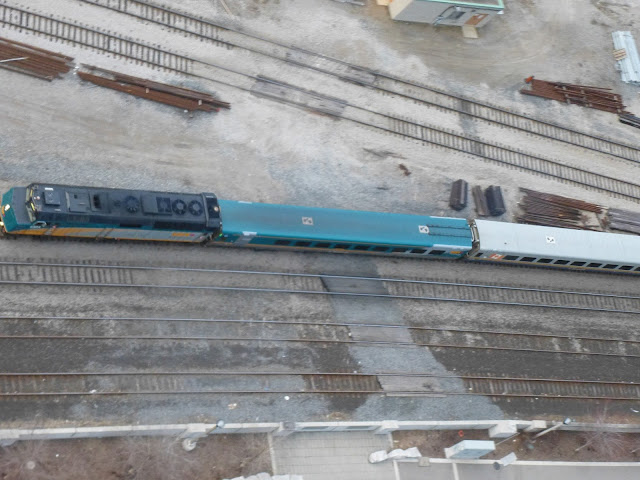 As I mentioned, I saw the Via Rail combination consist twice. This shot, again, shows you what these trains looked like from a vantage point that was almost directly overhead In this shot, you can see an F40 consist with four cars leading the second consist, also being pulled by another F40. Those tracks you see at the top of the shot comprise the GO Transit North Bathurst Yard, where GO Trains park during the off-peak hours. 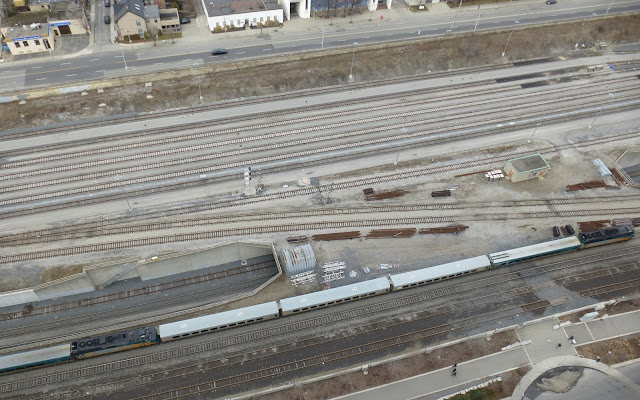 An aerial shot of a few GO Trains parking in North Bathurst Yard following the morning rush. The weather over the days I was in Toronto was quite misty, which made getting sharp images a little tricky. Still, it was fun to see these trains backing into the yard. The outer tracks in this yard were all stubs. It looked as through there were connected to the main line at both ends at some point. 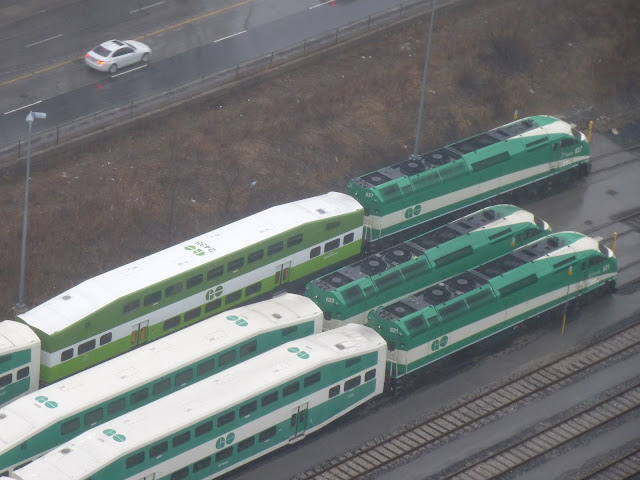 Four trains in one shot. This is a record for me that will likely never be broken. These four GO consists met right next to old Fort York, just west of the Bathurst Street bridge, which is in the bottom of the frame. You can really notice the mist in this shot. 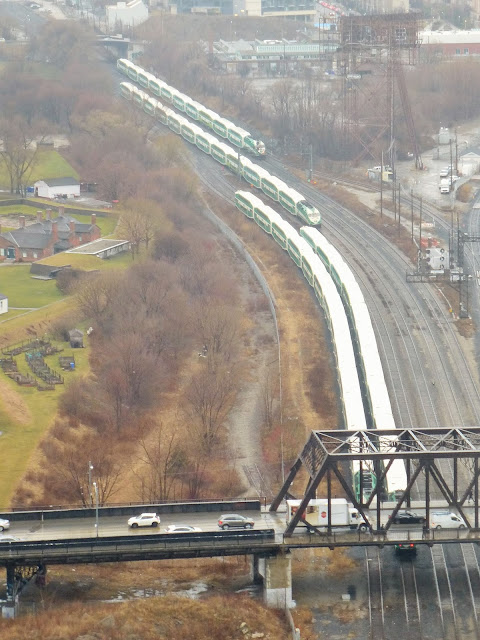 Here's an action shot of a GO Train backing into North Bathurst Yard right after the morning rush. What makes this shot even better is the combined Via Rail consist making its way to Union Station, to the left of the shot. Both trains are passing beneath the Spadina Avenue bridge. 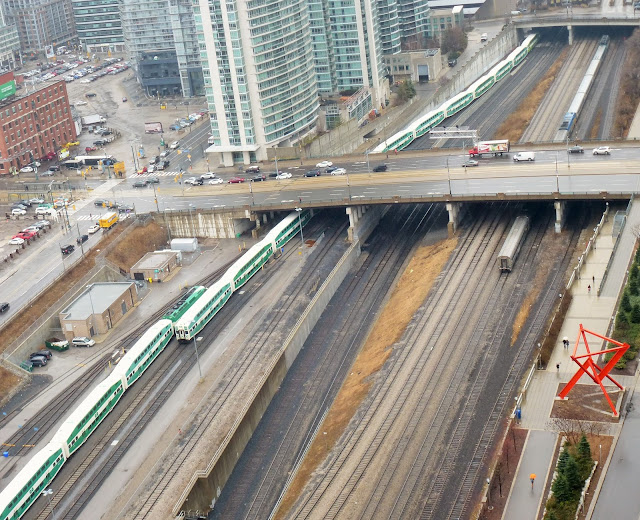 And with that, you have a somewhat complete picture of what I saw in Toronto last month. I have loads of other shots I will share on an infrequent basis.
* - A Moveable Feast is the title of Ernest Hemingway's unfinished memoirs, which were published following his death. In my opinion, his greatest work will always be For Whom the Bells Tolls, a fictionalized account of an American fighting with the Spanish guerillas during the Spanish Civil War.
Posted by Michael at Friday, April 22, 2016

Some great action and pics you had on your trip!

Thanks Dave. It was a lot of fun to see and to share.

A moveable feast...a religious term describing a feast day dependent on moon phase or other variables for its calendar date? Not the same as a chip truck.

Thanks for the added info, Eric. I figured someone would know what these combined consists are. They are cool to see. You are right about the religious significance of the term Moveable Feast. Being a Catholic, I am well aware of all of them!

Oh, and similar view to your second-last photo, though the trains are Railiner and F-unit consists in September 1986. From the CN Tower:
http://2.bp.blogspot.com/_kawpWTOGqPk/TCqusnuLnOI/AAAAAAAACU0/sNIVC6sRnmo/s1600/blogcntower10.jpg
Sorry 'bout copy/paste...
Eric