Going over old photos the other day, I was struck by some questions I had in mind that remain unresolved, so I thought I would open them up to my fellow rail enthusiasts.

When I was in the habit of shooting Via Rail corridor trains at Ottawa's main station back in 2013, it was not uncommon to find a number of the railway's new Renaissance cars operating. Like this converted baggage car linked up behind a P42 in the fall of 2013. 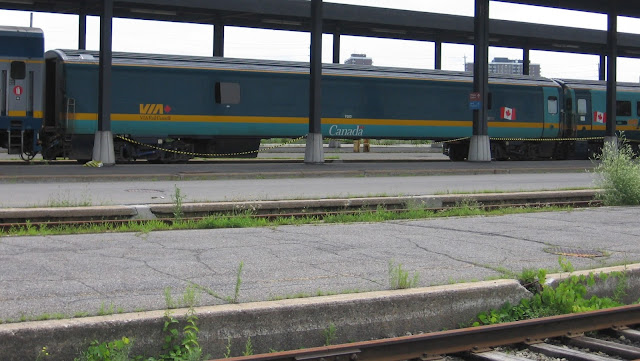 Here's another shot of some of these sleek cars pulling into Ottawa's main station on a train from Montreal. This was shot in October of 2013.

These cars, as most know, were purchased in 2000 and put into service in 2002, according to the Via website. There were 139 of these cars purchased, of which 64 were operational. The remainder were assembled in Canada. Interestingly, Via states on its site that there are only 33 Renaissance coaches in its fleet.

These cars, which were purchased from British concerns, were originally intended to comprise a train between London, England and continental Europe via the Chunnel. The train, to have been  called the Nightstar, never happened, which meant that these cars were in storage in England for several years before Via Rail bought them after conducting tests.

The Canadian Public Transportation Discussion Board states that "the cars have been far from reliable. They have undergone numerous modification campaigns, the most recent ones being undertaken by Industrial Rail Services, Inc. in Moncton, N.B."

So, here are my questions. After all the problems encountered with these cars, what has happened to them? Are there any in service? Where are they being stored? Are there plans to use them again?

Update: I did manage to catch a glimpse of some Renaissance cars in active service on a trip to Montreal recently. The shot below was taken as a P42 was backing this consist into Montreal's Central Station. I will have more on this in an upcoming post. These cars are in fact being used somewhere, although it's not in the Ottawa corridor, to the best of my knowledge.

The curious case of this little train

Back in 2013, I arrived at Via Rail's main station on a break and was treated to three trains. As you can see from this photo, though, one of them was a bit of a curiosity. I should point out that, usually, it's common to find one consist either idling or parked on one of the station's main tracks. But this one, consisting of F40 6435 and two stainless steel coaches, was backed up against the bumpers of a track that, until that day, I had not seen used. 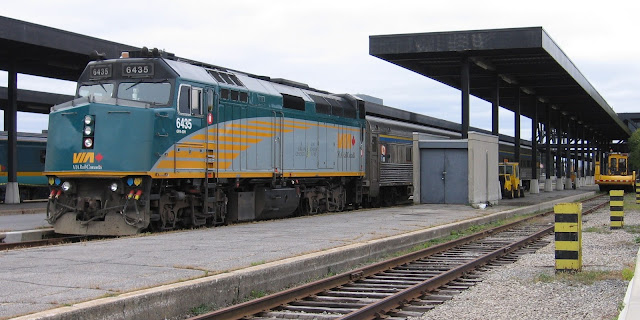 Here's another shot of the little train. I wondered that day, and still do, what was that train doing there? Was it a special? Why only two cars? Perhaps a group a chartered the consist? Whatever the case, I was glad I caught it. I'm wondering if any readers has any thoughts as to what this little consist might have been doing there, backed up on a secondary track. By the way, can you see the Renaissance coaches in the background? 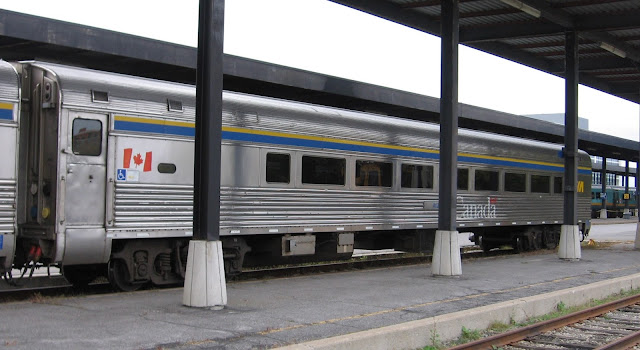 Final shot is from Sarnia's Via station in 2014. This was beside the spur that abutted the station (now removed, as per my brother's latest observations - Thanks, Marc). The track was used to park passenger cars in the past. I am guessing this mechanism has something to do with that. It looks to me like it was a hose hook up for water, possibly something to do with the old passenger cars and their steam generated heat? Does anyone know what it is and what it does? Or what it did? 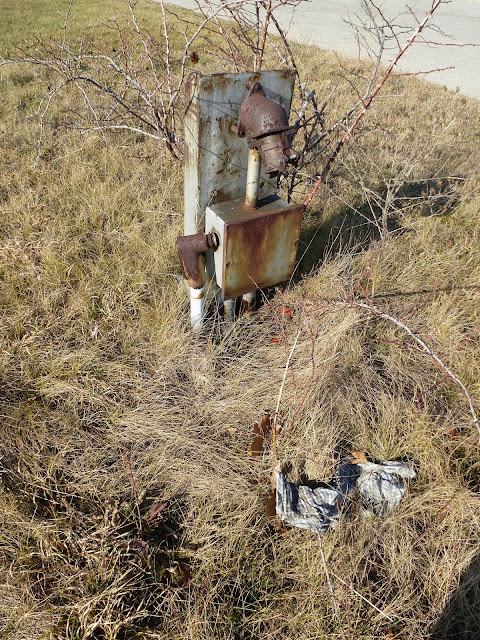 As I have mentioned before, I am no expert so I am throwing these questions out to the readers, so I can learn something and we can have a little fun.

The Renaissance cars are in service on VIA 14/15, the Ocean. When the Ocean was running six days/week, at times one of the three train sets was a stainless steel set but the rest were Renaissance. VIA has been running a Park car on the rear of the Ocean, which required a Renaissance service car to be rebuilt as an "adapter" car with a Ren coupler on one end and an AAR standard coupler on the other so it could couple up to the Park car. Ren baggage cars have different couplers on each end so they can couple up to VIA's locomotives, which have the North American AAR couplers.

At one time VIA ran the Enterprise overnight train with Renaissance cars, but that was discontinued. I understand the Ren cars have run in the Corridor on occasion but I don't know if they are currently doing so.

As for your short train, I imagine it was for crew training but I really don't know.

Thanks Steve. I was guessing that it was the Ocean that was backing up into Montreal station, given the direction it was facing. But, I wanted to leave the question to those who knew better than me. I can say I haven't see any Renaissance equipment in Ottawa since 2013 and haven't seen any on my travels through Southern Ontario either.

That last picture is definitely an electrical connection. If cars were stored nearby, it's likely a short power connection to power the lights, etc. inside the cars when the locomotive isn't providing HEP or isn't attached.

The press release from VIA regarding rebuilding of the Ottawa Station platforms to high level boarding stated that one of the benefits would be ability to run the Renaissance cars in the Ottawa-Montreal corridor, so you may see them here more regularly one day!

I forgot about those renovations, Paul. Good point. Maybe we will see the Renaissance cars in Ottawa again. Alex - thanks for the explanation. I've seen those hooks-ups before and always wondered what they were.

I'm pretty sure the "mystery train" in question is for crew training purposes. (engineers and conductors)

That seems to be the consensus. Thanks for the info, Brian. Now I know.