My family's recent trip to southern Ontario over the Thanksgiving weekend was all about making lemonade. I was excited to catch some railway action as we made our way down the 401. Nothing. I was then excited about catching some railway action in Goderich. Nothing. I won't mention what I saw in Sarnia because it was next to nothing. However, when life sometimes hands you lemons, you make some lemonade, right?

We'll start with Goderich, the western end of the Goderich Exeter Railway's Stratford-Goderich main line, called the Goderich Sub. Usually, when my family visits this area, there is something to see. This time around, I knew there would be nothing to see, since the day's morning train had already left the town (I heard it leaving as we emerged from a restaurant after a morning snack). I still made my way to the old Canadian National East Street Station and took a look at the railway's empty yard. Still, I like this shot below. Check out the lone axle at the end of the line. 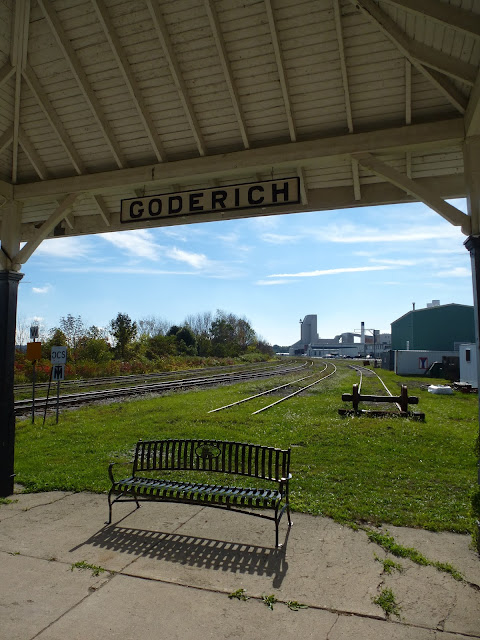 I made my way down the street to the railway's shops and even there, I felt as though my luck was nonexistent. Yes, there was a GEXR unit in the house, but there was no getting a shot. 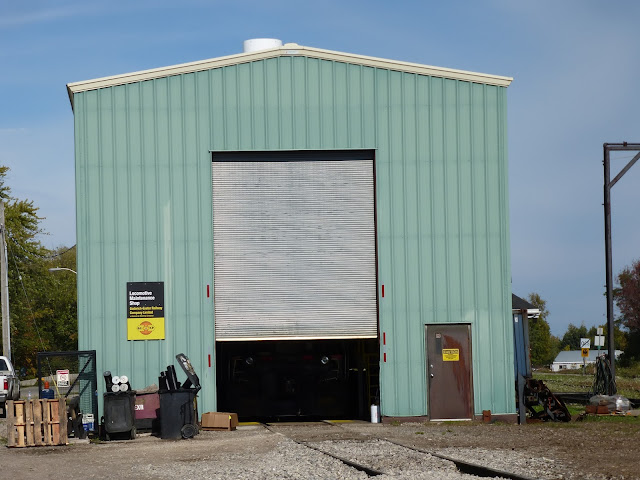 Here's a closer look at the bottom half of the engine. GP9 I think. 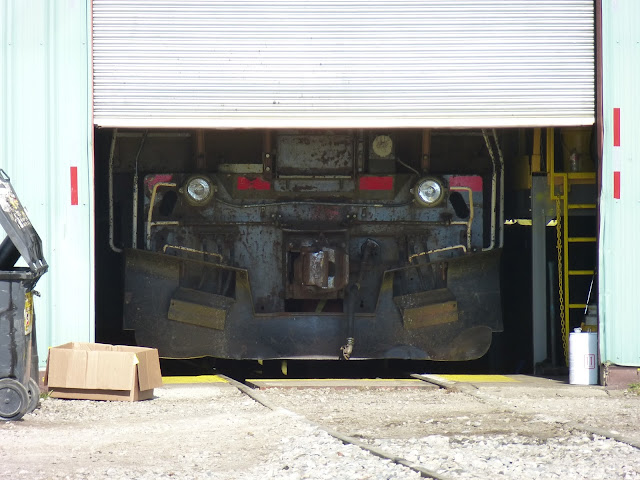 I was lucky enough to bump into the owner of the old Canadian Pacific Railway Station, which was moved in recent years from its spot next to a bluff to a spot closer to the town's beach. It now faces Lake Huron. You can check out this post and this post to see this restaurant in various states of development from the past several years. What you see below is pretty close to a finished product. A deck has been added to the station for the warmer months. The day we were there, two massive evergreen trees were being delivered to the site to complete the outside aesthetics. What impressed me about this renovation is how the character of the station has been faithfully preserved. When you look inside the place, you will see many of the original station's touches have been maintained. There's still a men's waiting room and ladies' waiting room, although I'm pretty sure the restaurant doesn't enforce that old rule! 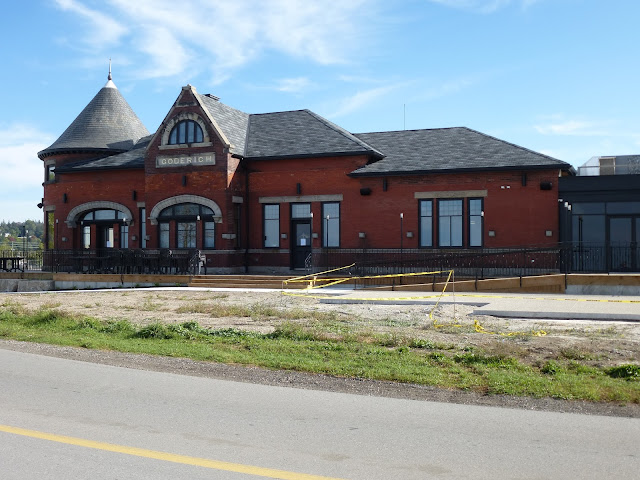 Here's a closer look at part of the restored station's architecture. This station has to be on of my favourite looking stations, simply for the various design elements that went into it and how all these piece somehow fit together into a coherent whole. 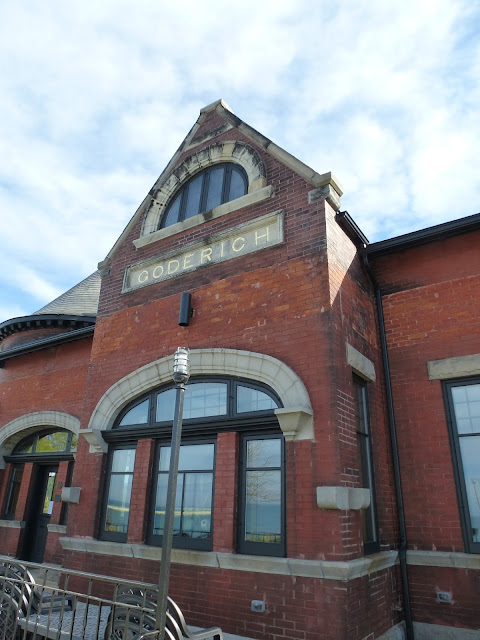 Here's a shot of the circular turret (the witch's hat) that now houses a circular eating area. 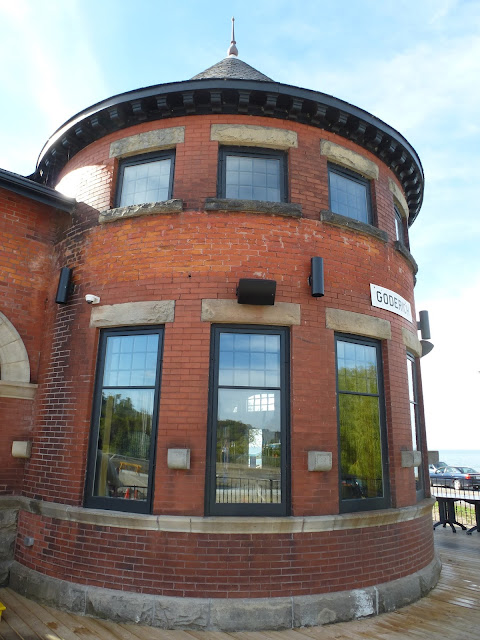 You may recall from this post that I cam across this rickety old trackside structure before and mentioned that it might be worth modelling to someone. Here's the best shot I could get from the old station platform. I didn't want to venture any closer to railway property. I'm not sure this old building is even used by GEXR anymore, but the doors were open on the day I visited. You can just see a lone hopper behind the shed, no doubt waiting to be loaded or brought down the hill to the Sifto salt mine. 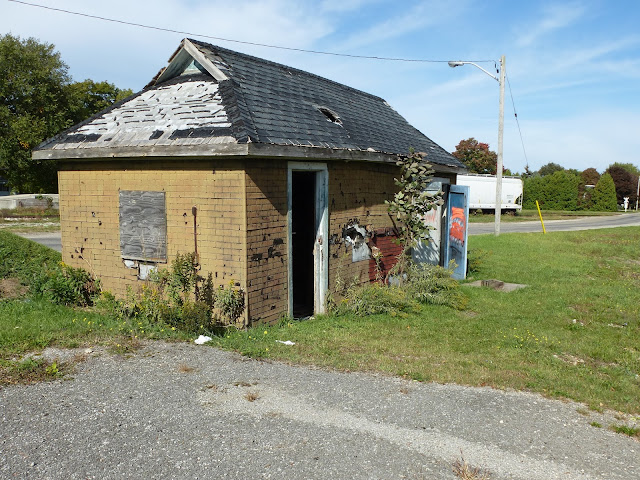 I didn't notice a lot of work being done on Goderich's port, which was part of the previous government's plans to build a deep-water commercial port on Lake Huron. You will remember at the time that I mentioned it would be interesting to see if this port initiative would include some sort of rail connection, since GEXR's rails already extend down to the port. Stay tuned on this.﻿
Posted by Michael at Thursday, November 19, 2015

FYI for the group - Just caught the 589 running back from Arnprior with four tankers at the 416 bridge at 3:41 this afternoon.

Thanks for the info AJ. I swear I heard it just after 4pm that same day, but I can also hear the nearby VIA corridor trains on the Smiths Falls sub from my house, so I might have heard that. I saw 589 a few weeks ago crossing Robertson Road in the morning at 930ish with what looked like 4-5 cars in tow. Good sign that this train is getting bigger!

Thanks!
My thoughts exactly - the bigger, the better for the line. Would be encouraging to see them pick up another client. Too bad they couldn't get back to running logs (mind you my cousins would kill me to say that as that would be bad for their business) like back in the day.