This summer has been spent trying to keep up with my two daughters, one of whom is now nearly five months old. The end result of our recent addition is that my train watching has basically ground to a halt for the most part, minus a trip to Smiths Falls in July. On Labour Day, I made my first trip to Walkley Yard just to see if there was anything to see. I ended up with a few tidbits I thought I'd pass along.

The shot below was my favourite from my quick trip. In the distance, you see CN 4771 parked in front of the local CN facilities, framed by a few bulkhead flatcars and a string of gondolas. Those flatcars, gondolas and that pile of wood next to 4771 lead me to my first bit of news. 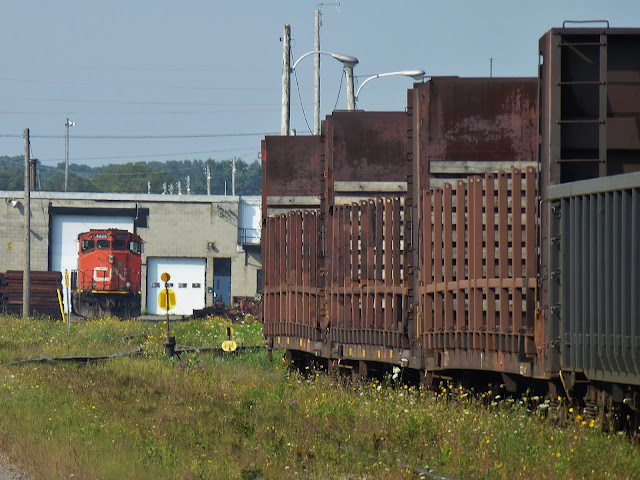 First off, gondolas and these types of flatcars are usually a sign of two things in railways. Either a railway is transporting scrap metal, pipes or some other similar commodity or the railway is doing track work. I took a shot of this car, below, because the colours, including the yellow stripe, intrigued me. The reporting mark was for American Metal and Iron LP. 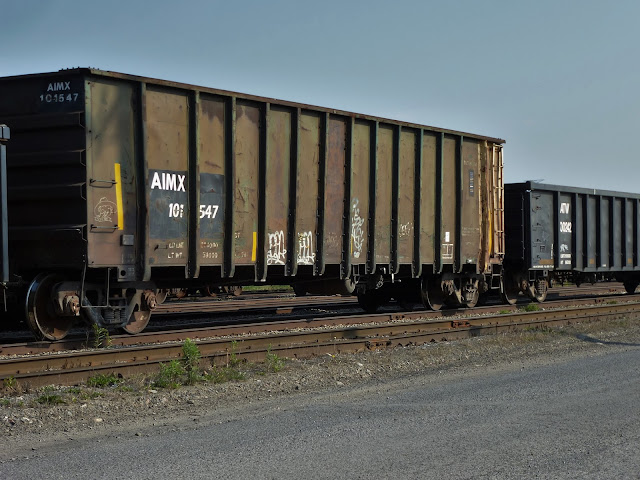 A close-up of GP38-2W 4771 shows that there is a load of ties next to the engine. Also, get a load of the paint. The red cab paint is bleeding through the black and white safety scheme on the long hood. I've seen a lot of shabby units in Ottawa over the years, but this one might be the worst (or best, depending on your point-of-view). 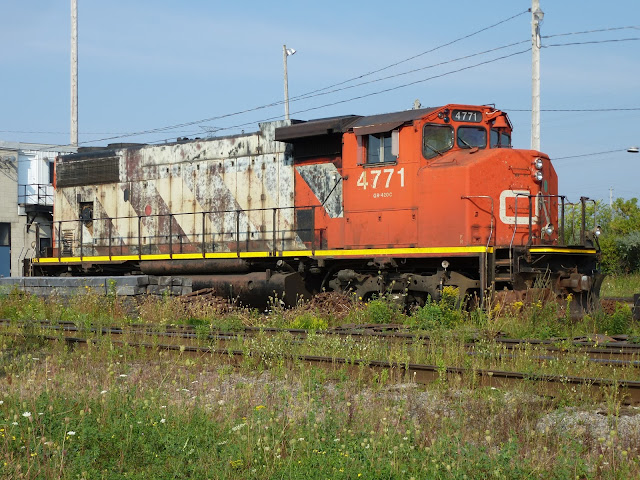 A little further down the road alongside the yard revealed more wood and other supplies in the vicinity of a ballast car (below). This looks to be wood that might be used at a level crossing or as decking on a trestle. I wouldn't have thought much of this if I hadn't found out earlier that track work is being done on the Renfrew Spur in Carp. I appreciate Eric Gagnon of Trackside Treasure for passing along the news.

It's great news to know that, despite the final removal of the Beachburg Subdivision northwest of Nepean Junction, there is some work being done to maintain train service in western Ottawa. This is also a great opportunity for me to pass along some pictures that local rail watcher Patrick Stever sent to me from the siding in Carp. He spotted this equipment in the spring, including this brush cutter. 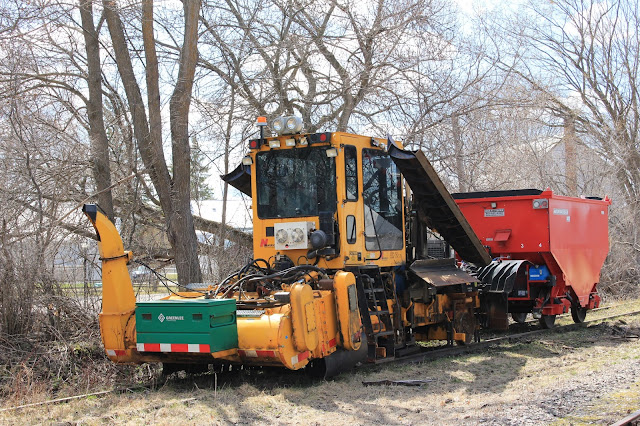 The below shot, also courtesy of Patrick Stever, shows that the groundwork for track improvements was being done months ago. Look at the piles of ballast to the left of the main line. I'm glad Patrick sent me these photos. I was trying to fit them into a post and now I am able to pass them along. 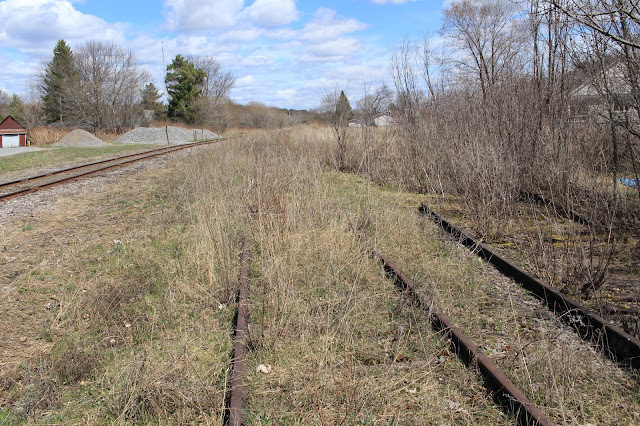 For those who don't know, this spur is owned by the City of Ottawa and maintained by Nylene Canada, a customer in Arnprior that requires rail service once a week. CN continues to operate a weekly train, usually consisting of three to four tank cars, to and from the plant. The spur has seen pretty restrictive speed limits for years, due to the condition of the track. I don't expect this work to change things. But, it's good to see that there is work being done to keep trains operating in the west end of the city for years to come.

A few days later, I was trying to catch the Arnprior local and noticed bundles of ties along the Beachburg Sub, just northwest of Bells Corners, where the line turns toward the Queensway. Here is what I noticed trackside. When I blew up the photo, I noticed that bundles of ties have been placed trackside all along this straightaway, meaning CN is investing in a bit of maintenance on this line. You can see the ties below. The case was the same on the trackage in Bells Corners near the junction between Beachburg the old CP Carleton Place Subdivision spur. New ties are all trackside, awaiting work crews. 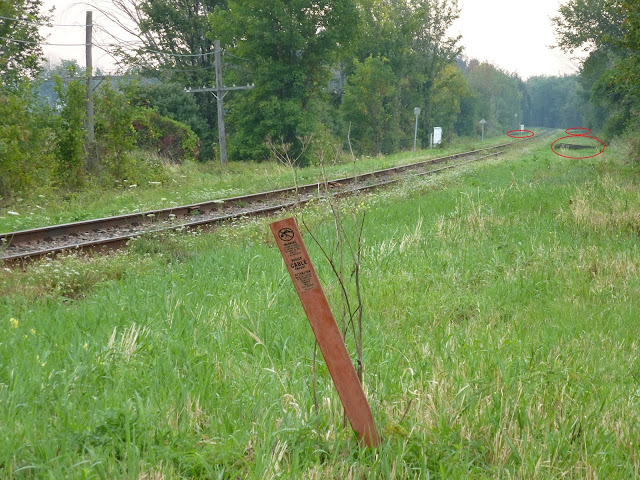 Getting back to Walkley Yard, I noticed when I first arrived that the former Devco caboose, still in its Devco green black and yellow colours, was not at its usual place close to the CN offices and maintenance facility. I also noticed that the hideous Millennium caboose was missing.

As I drove east down the access road next to the yard, I noticed an addition to DAWX caboose and RDC on a storage track. It turns out, the old Devco caboose has reached the end of the line. 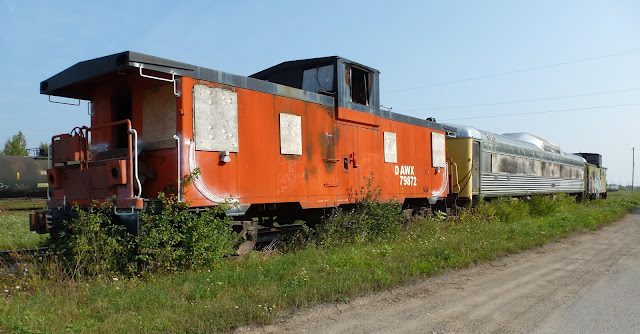 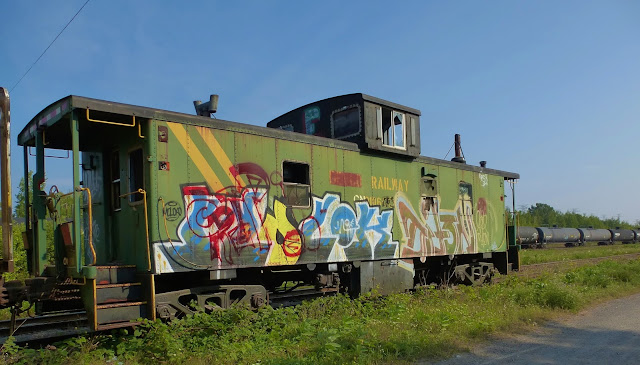 Also sad to see that vandals have continued to have their way with this old CN caboose. A fire was clearly set in the cupola at one point. As I have mentioned before, the security at this yard is a joke outside of operating hours. 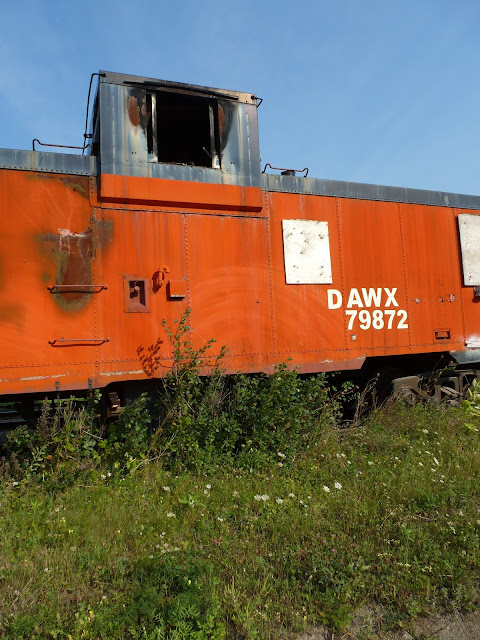 One final note to pass along. Via Rail had completed work on a new passing siding at Wass, east of Federal, to allow corridor trains to operate more efficiently. The siding is part of Via's investment in its local network. As I have pointed out before, Ottawa's main train station is Via's third busiest station in Canada, behind Toronto and Montreal. Thanks again to Eric at Trackside Treasure for passing along that news via another local rail watcher.
So there a few tidbits from my trip and from my readers. Not bad considering I have only railfanned a handful of times this summer.﻿
Posted by Michael at Thursday, September 17, 2015

Having worked with James Allen and a few of his colleagues on rail-related issues, I'm pretty sure the ownership of the Arnprior spur is split: the City of Ottawa, as inherited from the RMOC, owns the railway right of way, but Nylene owns and maintains the tracks. I'm not aware of there being any leasing arrangements in place, but I can't say for sure, either.

So long as Nylene continues to operate and require rail service, the tracks are safe. But should that change, they too could be at risk of disappearing if the City were to just sit by and watch them get lifted off its own land.

I'm glad you were able to get out and see some progress. Kids sure take up a lot of time - but they're worth it.

I drove past the old CP Carleton Place Subdivision spur where it meets Moodie. It looks like the rails which almost reached Moodie are gone now. It was a fast drive by so I might be wrong, but I think that is what I saw.

Thanks for the comments all. The Carleton Place spur is indeed being removed. I will have an update on that work next week.

David- You are probably right about the ownership of the spur. I've heard of those arrangements before where a city owns the land and an operator owns the rails. It's a strange arrangement to be sure, but not all that uncommon.

Steve - Yes, indeed, kids are worth it. I wouldn't trade in a moment. It also makes any time I can spend on this blog all the more rewarding.

MoW photos are always of interest. Thanks for sharing these, Michael! Thanks also for the shout-out! Just passing along news you can use, and I'm glad you find it of interest!
Eric

Thanks for your comment, Eric. I always enjoy getting shots of MoW equipment, especially when it's not being used to tear up track!

One must keep in mind that those bulkhead flats and newer gondola cars are, in the case of Ottawa, primarily cars that are sent to Ivaco in L'Orignal. That AIMX car is most likely for Engineering use but the others could all very well have been for Ivaco.

You're right on that. As I mentioned in the post, these cars could be used for steel, which would explain CN's run out to L'Orignal to Ivaco. CN operates an eastern local, 584, through Eastern Ontario twice a week. I was speculating in the post that they might be used for track work since there is so much going on along local rails. But you may well be right. Thanks for your comment and for the added information. Always welcome!